Why the French love Barack Obama -- even if he'd rather not be seen with them in public. 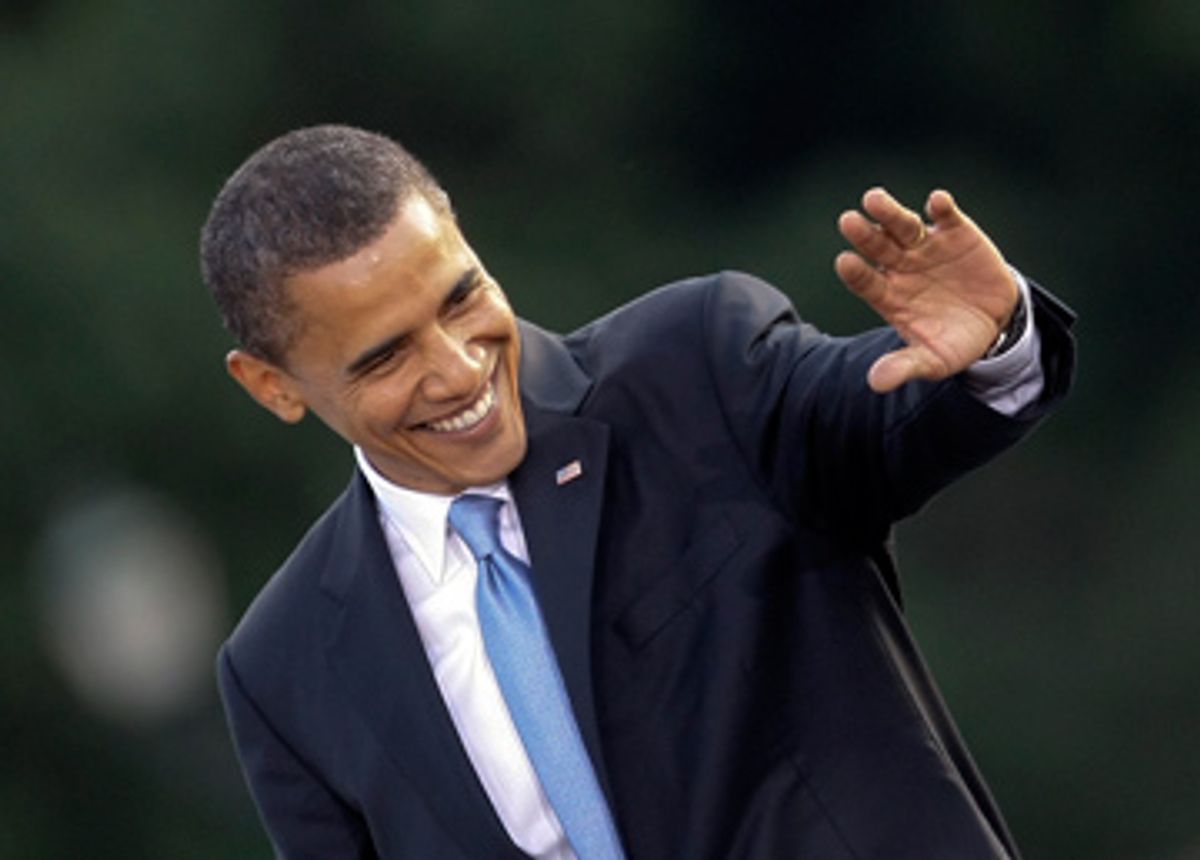 The building is not far from the Place Vendôme and the Opéra Garnier and is closer still to the Bibliothèque Nationale. For those in the know, this area, the 2nd arrondissement, is where Napoleon Bonaparte once lived, where the Americans Robert Livingston and James Monroe signed the Louisiana Purchase into being, and where Wolfgang Amadeus Mozart debuted his "Magic Flute." This quartier is where the "Jewish question" was decided during the German occupation, and where Alexandre Dumas' three musketeers rode and fought their way into myth and history. This is the very heart of Paris.

On Wednesday, a good-looking young man wearing jeans and a Barack Obama/France T-shirt waves his visitor into a chic, but not fussy, light-filled conference room. With its sofas, its simple black chairs filed around an elegantly rustic table, the room could double as a gracious salon in someone's home -- someone who's a hard-core Barack Obama supporter, that is. Obama posters are tacked to the wall, and others lie on the big table. An Obama banner is unfurled around one of the fireplaces, and two flags are draped on a chair -- one American, the other French.

Twenty-two-year-old Samuel Solvit is the kind of guy you'd like your daughter to date -- smart, ambitious and clean-cut. He studies economics at ESCE (Ecole Supérieure de Commerce Extérieur), but his vocation these days is Barack Obama. While Obama's candidacy has engaged the imagination and hopes of the French in general, Solvit started the Comité français de soutien à Barack Obama (French Support Committee for Barack Obama) in January 2008. His growing organization has 3,500 members so far, and its glittering honorary committee includes such celebrities as Axel Poniatowski, a member of Parliament; Bertrand Delanoë, the mayor of Paris; fashion designer Sonia Rykiel; Pierre Bergé, the co-founder of Yves Saint-Laurent; the journalist and filmmaker Frédéric Mitterrand; former Prime Minister Edith Cresson; and the writer and philosopher Bernard-Henri Lévy.

"I'm not an American ... It's your election first," Solvit says. "But I am a world citizen, and what you do will affect us ... If we see that the U.S. is changing, it's good for all of us." Solvit also believes it's a Republican thing to say that foreign support is bad. "Everything is moving. He [Obama] is a symbol of this new evolution."

Obama's Thursday speech in Berlin could be counted as a triumph. In a city chosen because Germany is Europe's economic heavyweight, and because Berlin is a living symbol of once-divided nation coming together, 200,000 turned out for Obama's evocation of JFK. But it is also interesting that Obama will not visit that other European capital, Paris, until Friday, at the end of the weekly news cycle, and then only for a brief meeting with French President Nicolas Sarkozy. A massive throng of cheering French people might have been an image more useful to McCain than the Obama campaign, given the way being "too French" was wielded as a cudgel against the previous Democrat to run for president. Because if anything, the crowds in Paris might have been larger than those in Berlin. In the July 23 Gallup Poll, Obama beat McCain as the preferred U.S. presidential candidate in Britain, France and Germany by lopsided margins. The highest numbers were in France -- a stunning 64 to 4 percent.

What is it about Obama that turns French heads? Some of the answers are idealistic. "People now feel that in America it's remarkable because of this ability to change," Solvit says. "From the time years ago that a black man could be lynched and now a black man could be president."

Obama backer Bernard-Henri Levy is effusive. "We French have the confused feeling that he is the living resurrection of the two greatest heroes, in our eyes, of modern America: Martin Luther King and John Kennedy. Yes, the reembodiment, in a single person, of King and JFK, that's how we perceive Obama.

From their culture-straddling perspective, Americans in Paris have a slightly different view of the French crush on Obama. Crystal Fleming, a 26-year-old Ph.D. candidate in sociology at Harvard University who is currently a traveling scholar at L'Institut d'Etudes Politiques at Paris, is often called upon to speak to the French media about Obama. "The French love him," she says, "for the same reasons that people around the world love him. There's such a level of disappointment and disgust with American policies and political arrogance. It didn't begin with the last administration, but it skyrocketed then."

But Fleming, an African-American who is studying how the history of the transatlantic slave trade is commemorated in France and the United States, has also noticed that the French affection for Obama helps them feel good about their own society. "They also see in him some of the aspects of their color-blind myths. The French esteem themselves as a color-blind society. They are, constitutionally, which is daily contradicted in racism and discrimination in France. But, regardless, they see him [Obama] as someone who wants to overcome communitaurisme" -- which basically refers to identity politics, the mobilization of minorities, and the fracturing of society along group lines -- "and to build bridges between groups and move beyond ethnic divisions. They like this."

Fleming finds it ironic that Western Europe tends to love Obama. "He's someone who they alternately refer to as a black or métis [mixed-raced] politician, but they don't know what to do with their own minorities."

Other instances of French projection onto Obama are less problematic. Retired Time journalist Don Morrison, who has lived in Paris the past few years, and in 2007 penned a controversial cover story for Time's European edition called "The Death of French Culture," thinks that for the French, comparisons between Kennedy and Obama go deeper than mere style. "More than perhaps any other country, France likes its politicians to be smart. Not just street-smart but book-smart. You can't get to high office here without having written a few books. And not just earnest tomes on public policy. French politicians crank out biographies, histories and books of poetry. A French literary magazine the other day asked me what I thought of a French presidential candidate's comments about a recent historical novel. Only in France do presidential candidates consider themselves literary critics."

"I think," Morrison says, "that's why the French love Obama. He comes across as somebody who has written a few good books and, more than McCain and certainly more than Bush, isn't afraid to be thought of as somebody who reads ... This is a country that takes culture seriously. [Obama] appears to the French to be somebody who values intelligence, education and culture. That makes him one of those idealized Americans that the French have always treasured, the ones who share the Enlightenment values that France did much to invent."

Americans in Paris recognize, however, that their countrymen back home may not share the attitudes of their French neighbors. American Parisian John Morris, 91, was the photo editor for Life magazine and Robert Capa's editor on D-Day. Morris has lived in Paris for 25 years. For the past year and a half, he's been actively involved in the Obama campaign. An Obama MeetUp group that now numbers almost 400 people -- mostly Americans, but also French and other nationalities -- meets monthly in Morris' apartment. "If the election were held here," Morris said, "Obama would win hands down. [But] the average Frenchman is more knowledgeable about the world than the average American. It's sad."

The irony is that in these days of intense globalization, when the world is becoming a smaller and smaller place, Americans are in some ways becoming more insulated. Foreign news is becoming less interesting to them. As Richard Pérez-Peña reported earlier this week in the New York Times, a study by the Pew Research Center shows that almost two-thirds of American newspapers publish less foreign news than they did just three years ago, nearly as many print less national news, and despite new demands on newsrooms like blogs and video, most of them have smaller news staffs.

For the first time since Pew began asking this question in 2004, a majority of Americans now see the loss of international respect for the United States as a major problem. The percentage of Americans saying the loss of international respect is a major problem has risen from 43 percent in 2005 to 48 percent in 2006 and 56 percent currently.

Perhaps that will partially relieve any trepidation in the Obama campaign about too many Paris photo ops, or of Obama being "too popular" in Europe. It is certainly good news for Americans who live abroad and who long to see America's reputation restored.

And whether or not Obama reaches the White House, his very candidacy is good news for those who want to improve America's image in Europe. As Obama's brief stopover in Paris approached, Solvit was feeling excited that he would be one of the privileged few to see his hero in the flesh. He had received an invitation to attend Obama's Friday evening joint press conference with President Sarkozy. "In France, everyone, of all ages, are for Obama," Solvit says. "Elite or non-elite, black or white, politically interested or not, people of all different backgrounds. For young people, it's a new way of speaking of world involvement and politics. It's a new American dream."

"You American people, it's your future," he says. "But it's also our future."

Beth Arnold is a journalist who lives in Paris and writes about politics, culture and the media. As a screenwriter, she was a semi-finalist for a Nichol Fellowship through the Academy of Motion Picture Arts and Sciences.