Trent Reznor doesn't just want you to steal his new songs, he wants you to tear them up. 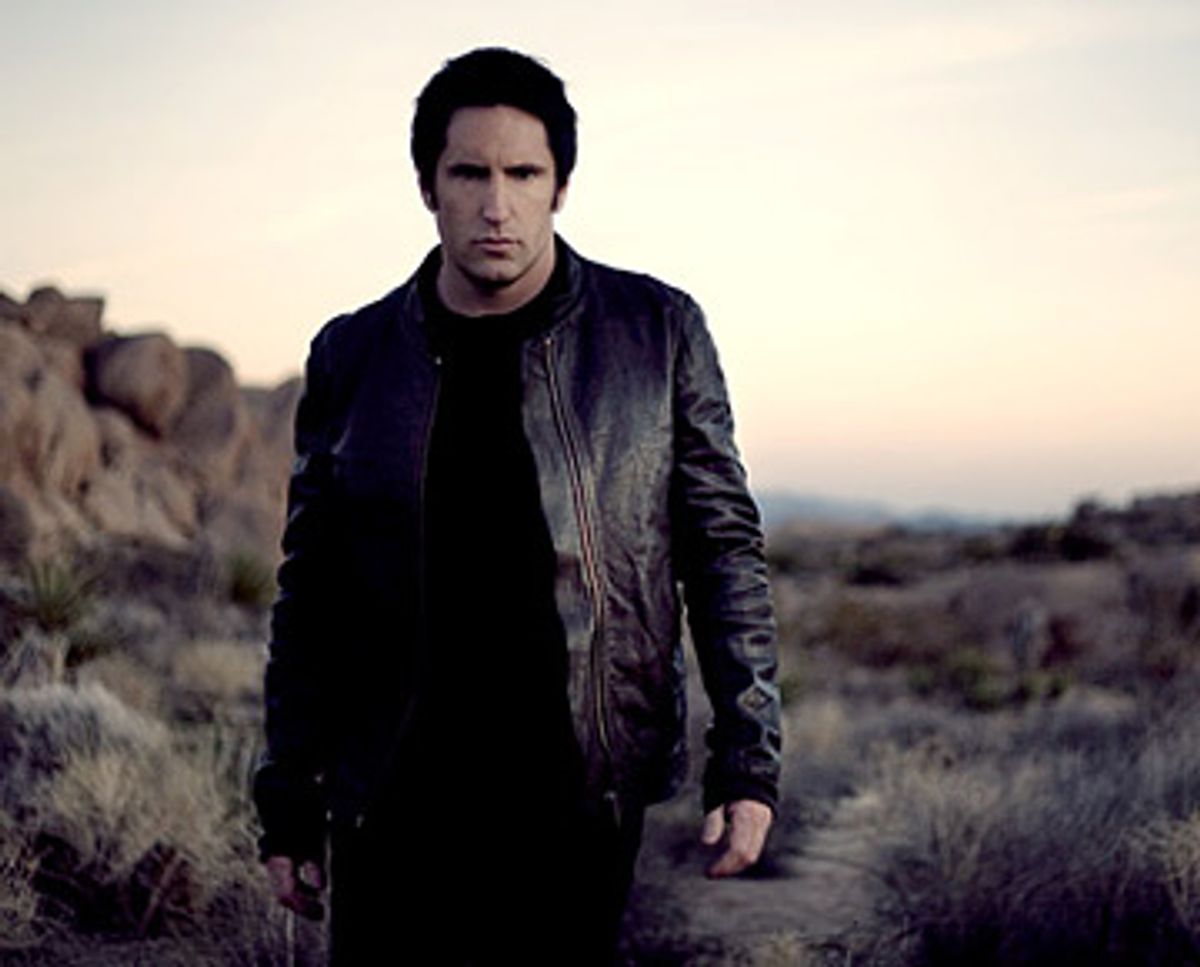 While unknown bands try desperately to get record deals, famous bands often work just as hard to get out of them. Trent Reznor, the only official member of industrial-rock band Nine Inch Nails, has chafed and waged war against his labels from the beginning of his 19-year career. When he discovered in 2007 that in Australia, the label had priced his album higher than other releases simply because his fans would pay more, he angrily encouraged a concert audience to download illegally. "Steal, steal and steal some more," he raged, "and give it to all your friends and keep on stealing."

For his latest album, "The Slip," fans won't have to steal anymore. It's available for free. "This one's on me," Reznor blogged -- although a physical version of the LP, including a DVD and a high-design booklet, in an edition of 250,000, is also available in stores. Predictably bleak and oddly simple, the new NIN record certainly isn't as well crafted as 2007's excellent high-concept "Year Zero," an imaginative tour through a dystopian America ruled by a totalitarian Christian regime, but Reznor created the new set of tracks for fans to download, remix and share on his Web site. So who cares if it isn't a great NIN record? "The Slip" could turn out to be one of your best albums.

When Reznor's obligation to Interscope Records ended in October 2007, it surprised no one that he decided to cut all his corporate ties and distribute his music online through his company, the Null Corp. He had already released a 36-song instrumental album, "Ghosts I-IV," through his Web site at various price levels, from a free download to a $300 "ultra-deluxe limited edition" of 2,500, which sold out. Other big stars in music had already leaned toward similar models: Last year, Radiohead offered their album "In Rainbows" on a pay-what-you-wish basis and created a splash. Most reports say the band sold 1.2 million copies, impressive in a diminished industry (though the real numbers might prove saggier).

Reznor is less a musical genius than a marketing genius. His contemporaries of late-'80s hard electronica, like Ministry and Nitzer Ebb, have dissolved into obscurity, while Nine Inch Nails have maintained a large and devoted following, in part because Reznor fiercely believes that pleasing his audience is more important than keeping the corporate suits happy. Reznor approaches the promotion of his music with the sensibility and instincts of a fine artist, provocatively exploiting trends in technology, psychology and especially contemporary horror films, remaining abreast of the ways in which they're constantly reshaping youth culture. He's brilliant at going beyond his fans' expectations to keep his edge sharp, as he did by releasing a widely banned video for the 1992 song "Happiness in Slavery," featuring "supermasochist" performance artist Bob Flanagan, who enters a dungeonlike room and lies down on a gurney outfitted with a machine that engages in rough sex with him and then rips out his viscera. Ow.

In a way, Rezno's concept for "The Slip" recalls that masochistic ritual. Fan remixes have cropped up illegally for years, but few bankable music acts have sanctioned them, and none have ever offered up their basic tracks -- effectively the master tapes -- for amateurs to reimagine. With so much industry concern for the protection of intellectual property, Reznor's ploy must seem absurd to the average exec. Reconfiguring songs has always remained central to Reznor's thinking about music; he frequently follows official releases of NIN records with long-format remix albums. Before parting with Interscope, he fought with it to post the basic tracks from his songs on his site for his devotees to do with as they pleased. His emancipation has made that far easier, and already fans have begun posting their rearranged versions of songs from "The Slip."

To invite remixes is to ask for criticism. The concept of the remix does away with the idea that the official, "first" recording of a song represents the definitive version. Reznor has always had problems with authority. What better way to subvert his own influence than to encourage his fans to remix the new NIN record before it has really solidified in the public consciousness? If he allowed fans any closer to his process, they'd be writing the songs themselves. The likelihood is high that fans will add elements they feel are missing from the originals, flip their genres (there's a gospel version of "Heresy" on the site, technically a cover version, not a remix, but very amusing), insert catchier hooks, load them with livelier beats.

So the fact that "The Slip" sounds like pretty generic NIN fare serves the concept well. At least one of the songs, "Lights in the Sky," sounds like a purposefully bad mix -- Reznor submerges his vocals behind a boisterously out-of-tune piano. If "The Slip" felt as fully realized as "The Downward Spiral," the material might prove more difficult and intimidating for all but hardcore NIN-heads and producer manqués to mess with.

The album's concept is considerably looser than "Year Zero," touching on suicide in its various forms, both literal and figurative: through internal numbness, investing too much in a lover, abdicating political responsibility and denial, among other methods. For another artist with a less cultish following, letting fans complete an official release could turn into a kind of suicide: Imagine what might happen if Britney Spears tried it. Taken in another way, however, Reznor could also be working through some ambivalence toward his status as an aging rock star. "Got these lines/ On my face," he sings on "1,000,000." "After all this time/ And I still haven't found my place."

From the simplicity of some of the songs, built mostly on relatively unexciting breakbeats, distorted guitar chuffing and fuzzed-out vocals -- pretty standard for NIN -- it seems like Reznor's revisiting the more straightforward constructions of his early songs, or at least scaling back. Instead of using freaktified studio or laptop gimmicks and whiplash dynamics to add verve, he has opted for industrial ambience -- even on that badly mixed ballad "Lights in the Sky" and the final song, "Corona Radiata," which could be the soundtrack for a 7.5-minute slasher movie, complete with a sinister electronic heartbeat at its core. This minimal, familiar music has left lots of room for NIN fans to splice in their own musical DNA.

Some fans have already started giving him a run for his (free) money. NegodJaeff, taking the bait, brings Reznor's "Lights in the Sky" vocal way forward and pushes the screwy piano further back to create a prouder, more effective ballad. 15Steps concocts an infectious beat for "Echoplex," and Soundtweaker's grimy, hook-conscious version of "1,000,000" sounds considerably more fun than the "original." As you listen to streams of these remixes, the theme of suicide as escape from responsibility, expressed in the album's title, starts to make an eerier kind of sense. In the hands of remixers, few of whom take their reinventions too far outside the NIN universe, the lyrics grow more resonant -- "I'm safe in here/ Irrelevant," sings the cut-and-pasted Reznor, imprisoned by another 15Steps mix.

Eventually "The Slip" sounds like an audio stage dive, in which Reznor lets his body of work fall backward into a sea of admirers, with supreme confidence that they'll support him.