Keira Knightley says no to airbrushing her boobs

The star of the upcoming movie "The Duchess" has refused to have her cleavage enhanced in promotional posters. 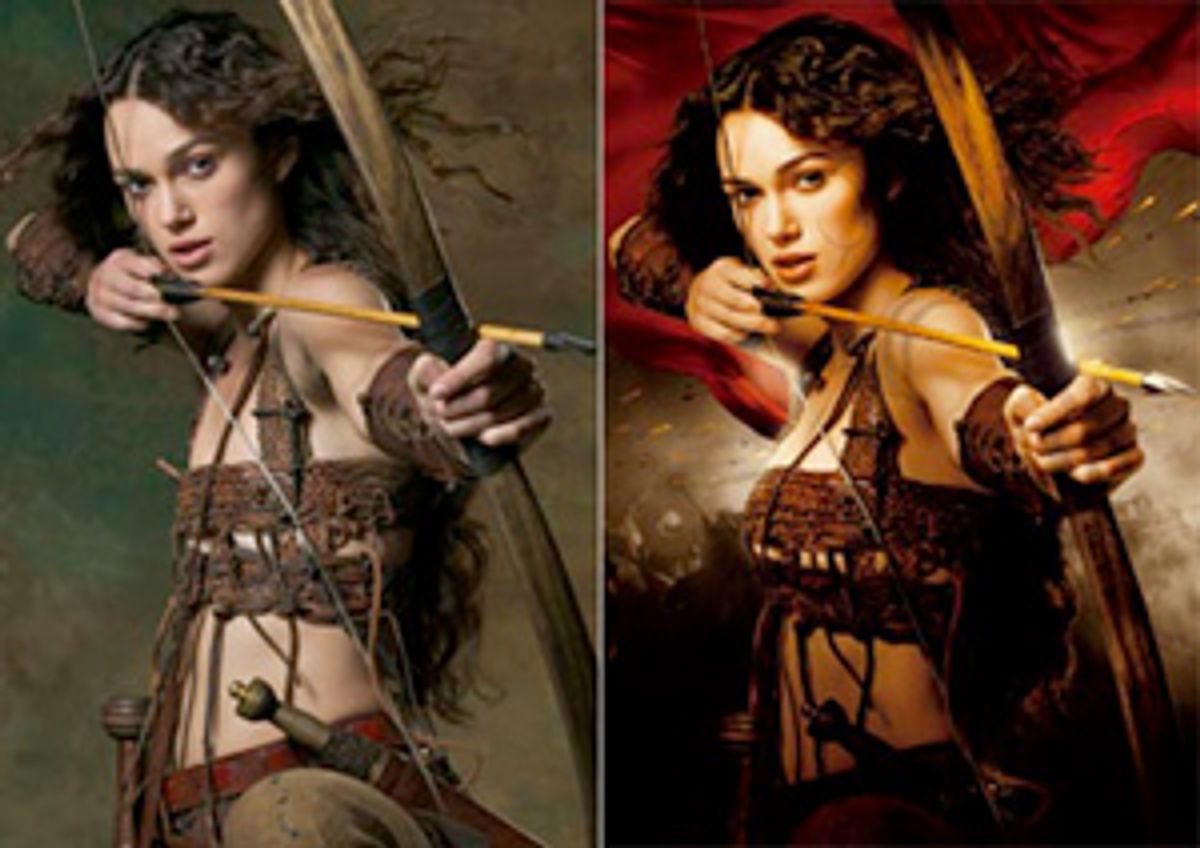 Sometimes I feel bad for Keira Knightley's breasts. Not because there's anything wrong with them, but because of the attention they draw. There was the "Pirates of the Caribbean," in which the sight of Knightley's suddenly ample cleavage was as surprising as the film's success (prompting references to her "treasure chest"). There was the scandal surrounding her nude Chanel ad, in which some shadowy lighting and a charcoal line made an exaggerated suggestion of what was beneath her strategically placed bowler hat. There was the juxtaposition of the American and British versions of the posters for the movie "King Arthur" (pictured)-- in the British version, her naturally small breasts have been strapped down by some sort of braided, leather tube top (clearly an ideal wardrobe choice for waging battle), whereas in the American version, someone appears to have stuffed two grapefruits down her shirt. Now, Knightley is surprising everyone by refusing to have her boobs airbrushed for her upcoming film, "The Duchess" -- a scandal reported on faithfully by the Mail in an article headlined: "Keira's Flat Refusal to Have Cleavage Airbrushed in Publicity Shots." Yes, flat refusal. Get it?

Here's the thing: Keira Knightley has small boobs. It's OK! Knightley herself jokes about them, referring to her breasts as her "pecs" and admitting to the Daily Mail that she "absolutely loved it" when a makeup artist painted on some extra cleavage for her during "Pirates." "It was the first time in my life I had big tits," she's quoted as saying, referring to the art of bosom makeup as a "dying art form" in the age of silicone implants.

But that doesn't mean she needs to say yes to every boob who wants to tinker with her tits (to use her preferred term) -- hence her decision to opt out of enhancement for "The Duchess." "Studio bosses wanted to make the slender actress appear more shapely, but Keira refused to have cleavage drawn on in shots," the article reports. An anonymous source says that Knightley objects to the retouching because she is "proud of her body and doesn't want it altered." Maybe that's the reason; maybe it gets a bit tiring to have everyone talk about your cup size. Or maybe she's just saying what we all probably knew anyway: It's fun to have a makeup artist give you big boobs every once in a while. But sometimes, especially when you're wearing a corset with your hair teased a foot and a half above your head in a Georgian-set period piece, you just want to ask people to leave your tits alone.