The man the McCain camp used to compare to the antichrist is working hard to win the vice-presidential nod. 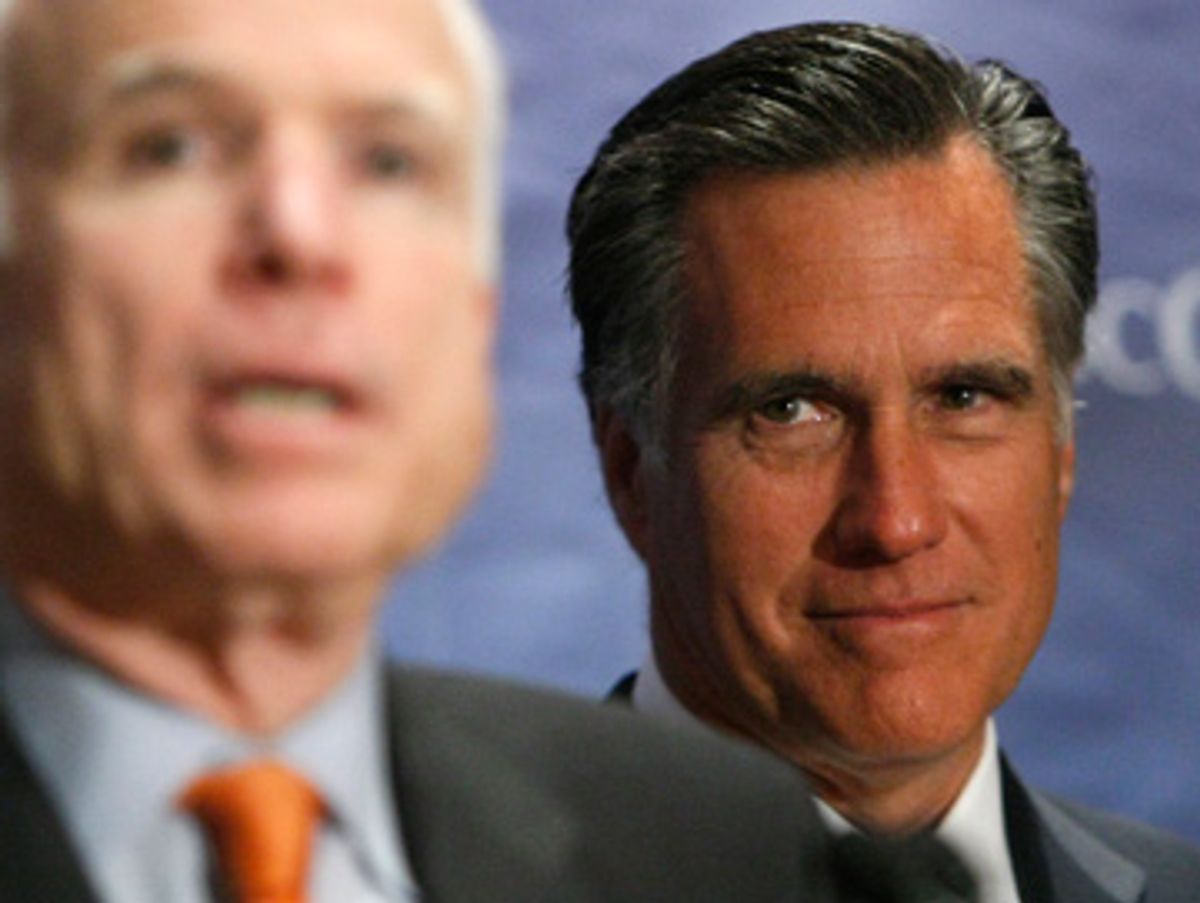 About 60 people gathered at Mitt Romney's vacation home in the ski resort of Park City, Utah, for an exclusive dinner a couple of months ago. All of them were top donors and fundraisers for Romney's failed presidential campaign. They'd helped him take in nearly $70 million (besides the $44 million of his own money that he spent on his bid) over the previous year or so. Just to get in the door of Romney's house, each person had to write a check for $35,000, earmarked for a joint account operated by John McCain's campaign and the Republican National Committee. The after-dinner entertainment was a freewheeling session with President Bush, who told the guests he'd rather take their questions than give a prepared speech.

Bush talked about Iraq, foreign policy, the economy and life after he leaves the White House. But the question on the minds of most of the guests was a little less lofty.

"Somebody in the audience said, 'Don't you think Mitt Romney would make a terrific vice president?'" Lee Hanley, an Arizona developer who flew up from Phoenix for the fundraiser, told Salon. "There's no doubt that a lot of people would love to see Gov. Romney on the ticket." (Bush apparently demurred, saying it was up to McCain.)

By the time McCain was finished with him this winter, you'd have figured the last thing Romney would want to do would be help out his former rival. McCain had taunted and bullied Romney through the primary season, beating him handily in almost every state they competed in and, finally, showing up to campaign in Romney's adopted hometown for no apparent reason other than to be obnoxious.

But a funny thing has happened over the past few months: Romney has become one of McCain's biggest fans. Within a week of dropping out of the race, Romney sent word out through his organization to get on board with the nominee. His political apparatus is rapidly integrating with McCain's -- in Iowa, for example, where McCain barely campaigned last winter, Romney's former state director is running McCain's operation. In Michigan, possibly the GOP's top priority this fall, Romney has been showing up often to put his deep roots in the state to work for McCain. Romney appears on TV whenever the McCain team wants him to, pushing the latest talking points with that same achingly earnest manner he showed all through the primaries.

"I'm appreciative every time I see Mitt on television on my behalf," McCain said this month. "He does a better job for me than he did for himself, as a matter of fact."

The fervor with which Romney and his team have enlisted may not be entirely due to GOP loyalty, though. As the economy emerged as the election's key issue, and Romney grew more and more comfortable working on McCain's behalf, supporters who ended the primary season wondering what steps they needed to take to keep Romney's chances alive for the next GOP presidential primary contest started wondering if he might be busy even sooner than that. While no one in Romney's inner circle will admit it publicly, his allies are doing all they can to set up their man as McCain's running mate.

Insiders say you can't campaign openly for the job of vice president -- it tends to backfire if you look too eager. "He's doing what they ask him to do, and he enjoys it," one former Romney advisor said. "I think if he really thought he was auditioning for vice president, he wouldn't be as good." But Romney's supporters -- and Romney -- are doing what's needed to make him an option. The effort is far more implicit than explicit, with the assumption that as Romney's former backers work for McCain, his value in McCain's eyes will go up.

"He understood that as he came out of this last cycle, there were people who were kind of angry with him," said one former close Romney advisor, who like most of his confidants, wouldn't speak without a guarantee of anonymity. "He's trying to say, 'Here's who I really am, I am a team player.' He has done enough right now for the McCain people to say, 'Mitt Romney stood up to the plate and did what we needed him to do.'"

Though every one of McCain's would-be running mates is also trying to show his or her value, Romney's got some high-profile backers weighing in, and as a former rival for the nomination, his efforts on McCain's behalf may be even more useful. Karl Rove, for instance, has said repeatedly he'd pick the former Massachusetts governor if he were in charge. (He's not in charge, but he does consult frequently with the small circle of McCain aides who are looking at potential candidates.)

Romney's confidants say they can't get a good read on what the McCain team is thinking, and they say they aren't phoning in to lobby for their man. "I don't think there's any news coming out of anything I would call a reliable channel," said Vin Weber, a former Minnesota congressman and a D.C. lobbyist who was a senior Romney advisor during the primaries. (Another Romney counselor estimated he might have a 20 percent shot at the job -- which, this advisor said, would put his chances higher than anyone else's.) As for Romney himself, he has been on back-to-back vacations, first in Canada, then in New Hampshire, and hasn't told his supporters whether he has submitted any vetting documents to McCain's legal team.

As a possible running mate, Romney's strengths are fairly obvious -- he's telegenic, he's seen as knowledgeable on economic issues, he's a prolific fundraiser and he could help in some swing states. So are his weaknesses -- his religion could hurt him with some voters, and as the primary race showed, he's not always the strongest campaigner.

As the Park City dinner showed, he has spurred his financial team to raise money for McCain. On a conference call with supporters in February, around the time he endorsed McCain, he left no doubt that he wanted them to keep writing checks -- just payable to a different guy. Before leaving for vacation this month, Romney officially notified federal regulators that he wouldn't try to get back any of the millions of dollars he dumped into his own campaign -- freeing his donors to give to McCain without having to save any cash for Romney.

McCain and his aides used to openly dislike Romney. Top strategists jokingly nicknamed him "Damien," after the kid in "The Omen" who grows up to become the antichrist. (The McCain campaign's sense of humor is rarely subtle.) Back when they were competing against each other, McCain would decline to answer questions about Romney's character, but in a way that made it clear he wished he could unload on the guy. No matter how helpful Romney might be in Michigan or in fundraising, it seemed like personal disdain would get in the way of putting him on the ticket.

That has now changed. "McCain didn't know Romney very well" back when they were running against each other, senior advisor Charlie Black told Salon. "We were in a tough-fought primary campaign, but they've spent a lot of time together in the last several months, and they've gotten to know each other a lot better, and there's both respect and like there." A former Romney aide agreed, saying the more the two men have campaigned together, the more they've bonded. "Six hours on a plane sitting next to somebody, you either are going to like them a lot or you're going to hate them in the end," the aide said. "Every single personality tic or every single mannerism is either going to drive you insane, or you'll find it endearing."

On Romney's end, allies insist the fights with McCain were never personal. "I had plenty of opportunities to be in private settings with [Romney] in which some flippant comments could be made," said Jason Rose, who ran Romney's campaign in Arizona, McCain's home state, where many Republicans have clashed with the nominee over the years. "He was always very respectful."

And now Romney finds himself at the top of some shortlists in the media, waiting for an assignment from the man who beat him. "He's going to do anything he can to help," a former aide said. "If McCain called him and said, 'Hey Mitt, I need you to go sit and stuff envelopes for two weeks in Columbus, Ohio,' he'd be like, OK, we're getting on a plane.' If McCain said, 'I need you to be V.P.,' he'd say, OK, I'm going to be V.P.'"