Up all night with a psycho blonde

Screwed-up strangers hook up for a last-minute New Year's date in the profane and delightful "In Search of a Midnight Kiss." 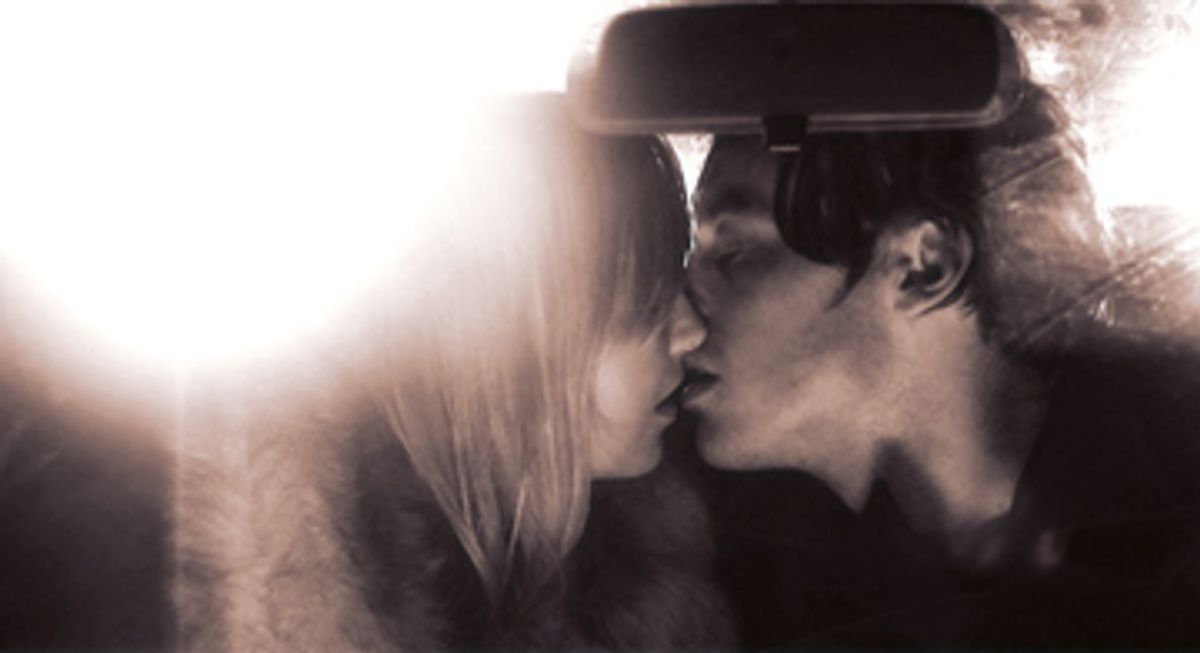 Profane, hilarious and ultimately heartbreaking, Alex Holdridge's black-and-white feature "In Search of a Midnight Kiss" has a gutter purity that makes you root for it all the way and forgive its patches of ultra-indie awkwardness. Its plot is one that Judd Apatow could use, and probably will: A lovelorn video store geek, not lacking in a certain dissolute charm, tries to find a last-minute New Year's Eve date via Craigslist and winds up circling the drain of existence -- or roaming downtown Los Angeles, which is roughly the same thing -- with a pill-popping, chain-smoking blonde whose hysterical redneck boyfriend keeps calling every five minutes.

A hit at last year's Tribeca Film Festival that has been making the film festival rounds ever since, "In Search of a Midnight Kiss" is both more delicate and more ruthless than that premise suggests. It isn't a farce about dating in the Internet age, because that's nothing more than a plot device, and it's more than a hipster-flavored rom-com, because Holdridge never lets you forget that the distance between these two characters can't be bridged in one night. Wilson (Scoot McNairy) is an aspiring screenwriter with scraggly, on-again-off-again facial hair and an espresso-depresso wardrobe; Vivian (Sara Simmonds) is showing her Texas trailer-park roots, and wearing Lindsay Lohan drag that falls just short of Hollywood Boulevard hooker gear.

Wilson wants to go to MOCA (L.A.'s landmark Museum of Contemporary Art) and Vivian's never heard of it; he asks her what she's been reading and she says flatly: "Books suck." Then again, it's clearly Vivian's view that men suck and the world sucks, and she's not necessarily making an exception for Wilson. (She has interviewed three other guys earlier in the day, and she's only giving him until 6 o'clock.) Part of the film's Woody Allen-esque comedy derives from the fact that both characters start behind the eight ball and have to win back even a modicum of audience respect: When we meet Wilson, he's jerking off to a Photoshopped picture of his roommate's girlfriend (she claims to be flattered), and when we first see Vivian she's mixing white Russians and prescription medication.

Both actors capture these affected, wounded, highly resistible people wonderfully, but as so often happens in a guy-oriented indie, Simmonds has more work to do. Vivian begins as an inscrutable, quasi-misogynist cipher, somewhere between vulnerable little girl and crazed psycho bitch. Simmonds gradually peels off her layers of artifice and inhabits her, making her seem more tragic and more mature by the minute and building toward a final revelation that this random New Year's flirtation stands at a turning point in her life.

Robert Murphy's black-and-white cinematography has been described as a homage to "Manhattan," and I suppose it has a similar effect, that of making these not-quite lovers and their dreary L.A. setting seem mythic rather than strictly realistic. But this, too, is a dream unlikely to remain untorn. When Wilson sweet-talks the pair past a security guard into an abandoned movie palace on Main Street (possibly the one David Lynch used in "Mulholland Drive"), Vivian stands starry-eyed on the stage and delivers a let's-put-on-a-show monologue that runs parallel to their whole evening together: It's lovely, but neither of them believes it for a minute.

Holdridge emerged from the Austin, Texas, film scene that produced Richard Linklater, and while there's a superficial resemblance to Linklater's "Before Sunrise" (producer Anne Walker worked on both pictures), the characters, setting and cinematic mood of "In Search of a Midnight Kiss" are completely different. For me, at least, the moments when Wilson and Vivian click almost effortlessly, laughing in mutual wonder and teasing each other mercilessly -- setting aside the fact that they just met, have little in common and have come together in desperation -- are both exquisite and painful. If you've ever spent a night (or a month, or a year) with somebody who clearly wasn't right for you but who you'll never be able to forget, I'm guessing you'll feel the same way.

"In Search of a Midnight Kiss" is now playing at the IFC Center in New York, and opens Aug. 8 in Boston; Aug. 15 in Philadelphia, San Francisco, Seattle and Washington; and Aug. 22 in Chicago and Los Angeles, with more cities to follow. It's also available on demand at IFC in Theaters on many cable TV systems.

Beyond The Multiplex Movies Texas