"Stealing America" airs out the same old questions (and conspiracy theories) about the murky Bush-Kerry election. But it avoids the really scary stuff. 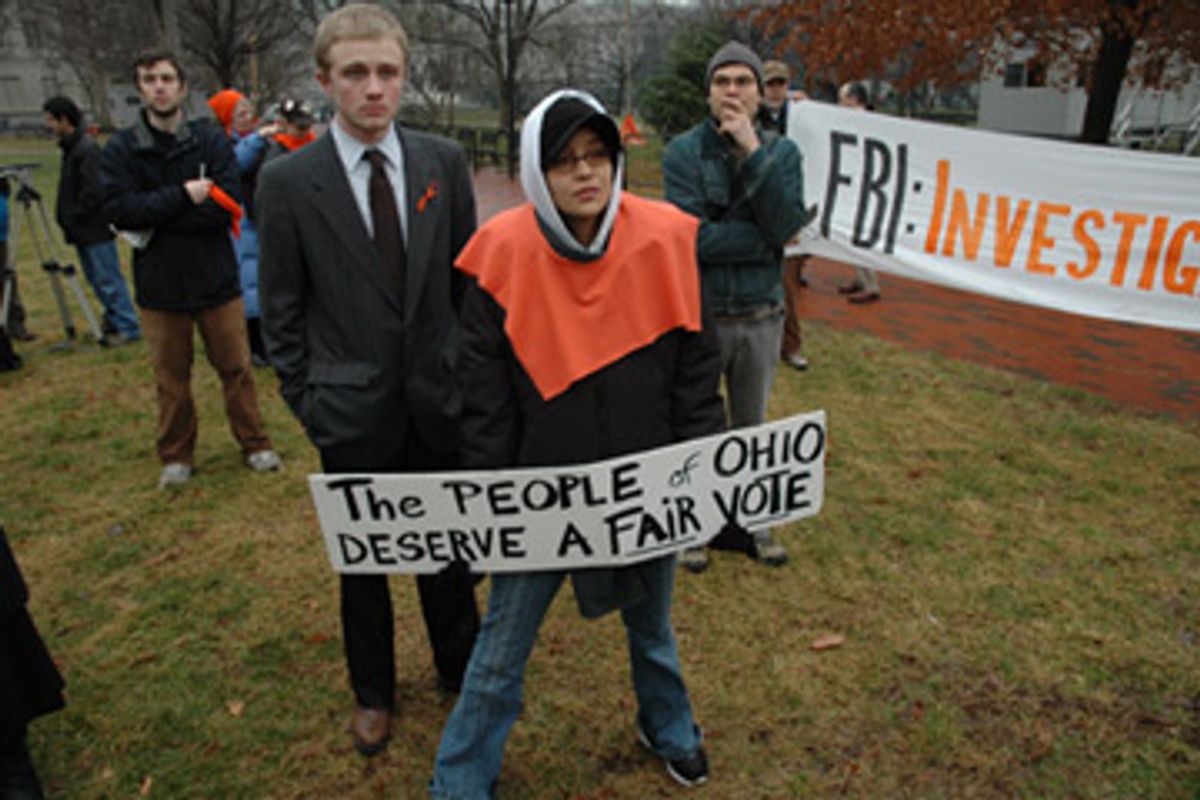 I don't mind that Dorothy Fadiman's film "Stealing America: Vote by Vote" raises once again the massively vexed question of whether the 2004 presidential election was fixed. That spectral possibility lingers in many people's minds, retains at least a general outline of plausibility and, thanks to the electronic voting systems in use in so much of the country, can never be conclusively proven or disproven. I do mind, though, that "Stealing America" is a clumsy if well-intentioned work of recycled propaganda, a mixture of hard evidence, random anecdote and far-flung inference that may convince some viewers that a clear verdict can be rendered on that impossibly murky event.

To those who've been following the work of investigative journalist Greg Palast, New York University professor Mark Crispin Miller and activist attorney Robert F. Kennedy Jr. over the last four years, there's not much that's new in "Stealing America." (Palast and Kennedy appear in the film, and Miller is listed as a consultant.) Fadiman has compiled a greatest-hits collection of problems, anecdotes, rumors and theories about what happened in 2004, with only the briefest lip service paid to the crucial information that hardly any of that year's problems were new, even the ones that appeared to be unique.

Voices in "Stealing America" range from computer analyst Bruce O'Dell (one of its producers, and provider of its most nuanced and eloquent perspective) to pollster John Zogby, Florida election official Ion Sancho and former Wall Street Journal editor Paul Craig Roberts, among many others. Like Kennedy, Palast and Miller, those people all smelled a rat in 2004, but Fadiman never makes clear that you might not get any two of them to agree how big the rat was or how it got in the house.

Did election officials in many jurisdictions make it inordinately difficult for African-Americans and other pro-Democratic demographics to vote, either through incompetence, malice or both? I think there's no question about it, and by showing us those appallingly long lines at black Ohio precincts, Fadiman drives that home. If the Voting Rights Act had any teeth, and if the Justice Department wasn't in the hands of a cabal of anti-federalist radicals that does whatever it can to avoid enforcing civil rights law, I strongly suspect that on that basis alone John Kerry would have been elected president in 2004.

"Stealing America" leaps directly from that level of inquiry, and several related questions about vote suppression, to the twilight zone: Was there also massive electoral fraud in 2004, involving hundreds if not thousands of conspirators, in which 6 million votes or so, along with four or five states, were electronically switched from Kerry to George W. Bush? And does the much-bruited exit-polling problem -- in 10 of the 11 crucial battleground states, Election Day exit polls suggested a better result for Kerry than the reported vote -- constitute an almost-smoking gun?

Look, I don't know. I write about show business. It would be idiotic for me or anybody else to insist that it's an impossible scenario. Explanations abound for the exit-poll anomalies, but I think we can all agree they're a problem. Here's what I do know: 1) As Fadiman's computer experts tell us, fixing a moderately large number of votes is technically feasible. 2) If Karl Rove and Dick Cheney could do such a thing, they certainly would. 3) The whole thing is unproven and unprovable, and gets a pretty low Occam's-razor score for probability. Conspiracy theories, whether they're about the JFK assassination or 9/11 or Flight 800 or, I don't know, the 2002 Kings-Lakers series, represent our desire to see order in a chaotic and ambiguous universe, whose patterns are generally too large for us to grasp. On a more practical level, they generally require a degree of competence, organization and secrecy for which human beings are not much noted.

My former Salon colleague Farhad Manjoo endeared himself to many, many readers (that's a joke!) by scrutinizing the cases for fraud made by Kennedy and Miller, among others, and finding them flimsy. Fadiman never even acknowledges, let alone addresses, the counter-arguments raised by Manjoo, pollster Mark Blumenthal, investigative journalist Mark Hertsgaard and many others. That's why I describe her film as propaganda, and why I haven't called it a documentary. It's one thing to have a point of view, even an unpopular or outrageous one, and pursue it vehemently. It's quite another to feign an interest in the truth while ignoring all complicating or contrary evidence.

But let's back up for a second and acknowledge that Fadiman's film, like Miller's book and Kennedy's Rolling Stone article and Palast, Hertsgaard and Manjoo's reporting, is motivated by righteous indignation and aimed at virtuous ends. Manjoo was pilloried in Salon's letters section as an election Pollyanna, a Rovian agent and worse, but here's what he wrote while reviewing (and rejecting) Mark Crispin Miller's book in 2005: "The fact is that the machinery of American democracy is broken; mistakes, inaccuracies, chicaneries, snafus, frauds, fiascos and disasters debilitate almost every race everywhere every two years, with the result that increasing numbers of Americans report feeling alienated by the voting process. It's no exaggeration to say the problem has reached the level of a national emergency."

"Stealing America" is evidently part of a would-be activist campaign to revive the electoral process, mitigate the many problems seen in recent elections and return to paper ballots whenever and wherever possible. That's a fine idea on its own terms. We saw enormous turnouts of voters signing on to the tattered ideal of American democracy in both 2000 and 2004, and the result -- one gibbering, nightmarish clusterfuck of an election, and another with a pervasive rotten-lunch-meat smell -- was positively scandalous.

Where I might part company with Manjoo and Miller and Fadiman and everybody in between is on the question of whether it's only the machinery of democracy that is broken. What good is an accurate vote count in a contest between two members of the same secret society who support the same disastrous war? Or, for that matter, between two self-described maverick outsiders whose resistance to corporate power and neocon foreign policy mysteriously melts in the summer heat of election year? Of course, maybe Barack Obama didn't really vote for warrantless eavesdropping and immunity for the telecom industry. There must have been a problem with the machine.

"Stealing America: Vote by Vote" is now playing at the Quad Cinema in New York, and opens Aug. 15 in Denver and Los Angeles; Aug. 22 in Philadelphia; Aug. 29 in Boston, Minneapolis, Santa Fe, N.M., and Washington; Sept. 5 in Austin, Texas, San Francisco and Seattle; and Sept. 26 in Columbus, Ohio, with more cities to be announced.