Kevin Costner holds the fate of the U.S. in his hands in this surprisingly nuanced picture. 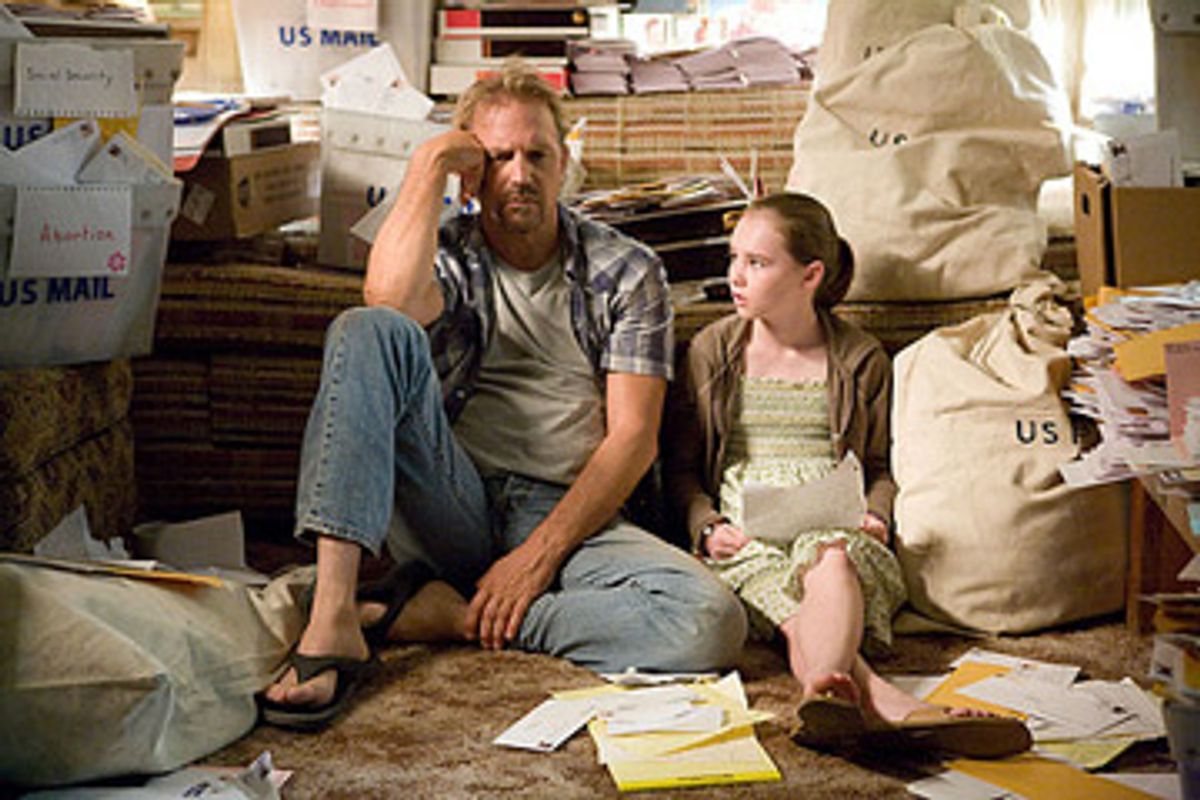 There are some interesting little surprises in Joshua Michael Stern's "Swing Vote," glimmers of intelligence flashing briefly amid the muddiness of the picture's uncertainty. Unfortunately, you have to wade through the whole movie to get to them. Kevin Costner plays Bud Johnson, a beer-swilling, underemployed and underinformed American who, as the result of a voting-booth glitch, holds the future of the United States in his hands. His vote will determine the country's next president, which means the two candidates vying for office -- the Republican incumbent, Andrew Boone (Kelsey Grammer), who bears a slight resemblance to Gerald Ford but isn't nearly as clumsy, and Donald Greenleaf (Dennis Hopper), a Democrat who robotically insists he's running on a platform of ideas, not gossip -- begin to court him, completely reversing their platforms to cater to his barely even half-thought-out whims.

And so when Bud, brainlessly chattering to a reporter (Paula Patton), repeats some homespun wisdom his dad used to spout, President Boone comes out in favor of gay marriage. When Bud says he's pro-life (who, after all, is anti-life?), Greenleaf responds with a TV spot decrying the barbarousness wrought by Roe v. Wade. The bumbling Bud has inadvertently, if temporarily, turned the political world upside-down, much to the frustration of his precocious, civics-minded young daughter, Molly (played by an extremely focused newcomer named Madeline Carroll), who accidentally triggered all this mishigas in the first place.

"Swing Vote" opens with some suspiciously majestic-sounding movie music, accompanying heartland-style images including a neon bowling sign hanging forlornly in a small-town somewheresville, USA. (As it turns out, "Swing Vote" is set in the not-fictional town of Texico, New Mexico, although the movie was filmed elsewhere in the state.) At the sound of those heart-tugging strings (the score is by John Debney), I fastened my seatbelt for the bumpy night ahead, fearing I was in for a homespun homily about the wisdom of regular folk balanced against the duplicitousness and idiocy of politicians.

"Swing Vote," which is Stern's second feature (the first was the 2005 "Neverwas") does address the duplicitousness and idiocy of politicians. The relief is that the movie, co-written by Stern and Jason Richman, isn't a simple-minded "Mr. Smith Goes to Washington" retread: Stern makes it clear we're supposed to like Bud, and to sympathize with him to a degree -- the movie suggests that his apathy about political issues is partly caused by the fact that he's too frazzled by everyday life to care about them. Young Molly is the real adult in this two-person family. She's taken it upon herself to take care of Bud after her mother (played, in a very small role, by Mare Winningham) left the family ostensibly to pursue a singing career. At one point Bud complains that she's made egg-salad sandwiches for lunch again, and she shoots back, "You wanna eat better, drink less beer." Later, she reminds him that it's voting day and, since she can't vote herself, she desperately wants him to get to the polls. (She, in fact, is the one who got him registered in the first place.) When she gets a blank answer after asking him what his party affiliation is, she crisply informs him that he's registered as an independent, because "the two-party system has neglected the needs of the working poor."

Whether or not you agree with her line of thinking, Molly knows what she's talking about: She and Bud are the working poor. Bud even notes that if his daughter ever got sick, he'd have to sell his blood "again" -- the family has no insurance. "Swing Vote" is a maddeningly indistinct picture: In places it wants to be a sentimental family drama, and that's when it goes limp and dull, despite the fact that Carroll does her best to maintain a believable tough-cookie demeanor, and Costner, beneath his stubble and askew baseball cap, never stoops to playing the lovable crank -- he's fully in touch with his character's flaws. "Swing Vote" sometimes works as political satire (particularly in the way both of the candidates' right-hand men, played by Stanley Tucci and Nathan Lane, find wily and unsavory ways to control their bosses). But overall, the picture just isn't sharp enough: It meanders when it needs to be electric, and for long stretches, whatever ideas it's trying to get at -- about the nature of democracy, or the untrustworthiness of politicians -- are murky and indistinct.

And yet Stern and his lead actor do manage to pull it all together at the end. At the beginning of the movie, Stern holds Bud up as a likely potential hero -- and then, wisely, drops him. After that, he and Costner start working toward a greater goal: "Swing Vote" is a nonpartisan plea for political engagement. The movie doesn't celebrate "the little guy" just because he's "little": Instead, it asks us all to make more of ourselves, and suggests that if we don't want other nations of the world to look down on us as rubes who can't be bothered to care about the issues, then we have to start caring -- and, even harder, thinking. Costner can be a maddening performer, given to vanity and self-consciousness, but he's not afraid to let Bud play the fool here. Through much of the movie, Bud babbles on with no idea what he's talking about. It's only when he shuts up and listens that he truly gets the picture.