Why won't you blurb me?

I had an agent and a book deal for my first novel. All I was missing was quotes for the back cover. Next time, remind me to suck up to more famous writers. 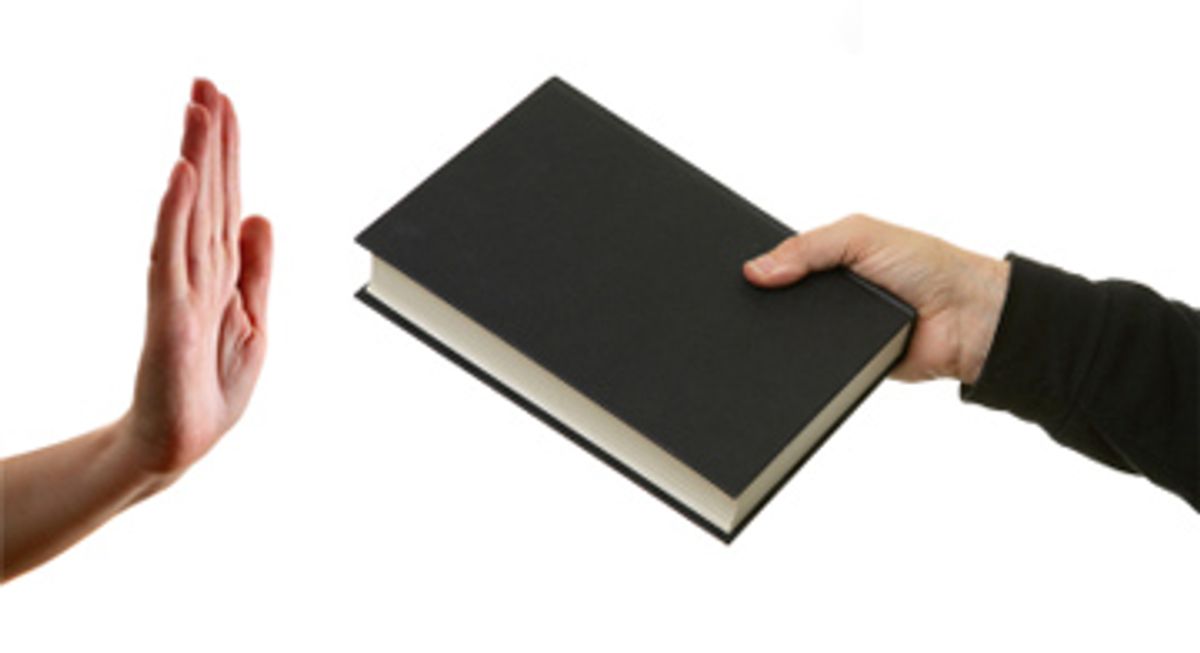 Some years ago, I went to a party at the writer William Styron's house in rural Connecticut. The great man himself was somewhere else, but his daughter, my friend, had invited a few people over for dinner. After the meal, I wandered into the living room, where I saw a long table piled high with unbound book manuscripts, all as thick and unwieldy as a Manhattan telephone book. Curious and slightly sheepish (was I being too nosy?), I went to take a closer look. A thin coating of dust lay over the manuscripts, many of which had yellowed with age. I leaned down to read the cover letters. Each was practically identical. "Dear Mr. Styron: It gives me great pleasure to present the debut novel of writer X." Each letter writer went on to praise the author as a talented new voice on the American literary scene and then requested a blurb from Styron. I looked (in vain) for a name I recognized. I hadn't written a novel at that point in my life (though I wanted to!) but I remember feeling distinctly chilled by that graveyard of hopeful dreams.

A decade later, I managed to beat the odds by finding an agent and a publisher for my own first novel. All seemed to be going well until, about six months before publication, my editor called to discuss the issue of blurbs. For the paperback version of my book, I'll have plenty of reviews with which to lard the back cover but, pre-publication, the first-time novelist needs quotes like "Genius!" or "Masterpiece!" or "Johnson writes like an angel!" from other, more established, writers in order to lure potential readers. Thus commenced the dreaded search for blurbs.

No problem, I told my editor. I've lived in New York City for 25 years. I'm a professional journalist. Some of my best friends are novelists. I rattled off their names to my editor and was met with a worrisome silence.

"What about Ann Patchett?" she asked. "Do you know her?"

I do not know Ann Patchett. My novelist friends were not, it turned out, the right kind of novelists. They'd either written the wrong kind of novels (one of my closest friends has written 13, all paperback trade and all distinctly mass market) or had written literary novels that suffered the same fate as all those talented new voices on William Styron's living room table. They'd received admiring reviews and sold few copies. To be blurb-worthy, they needed to have received admiring reviews and sold well.

"Do you," my editor pressed on, "know anyone who knows Ann Patchett?"

And so I began the humbling process of mining the outer reaches of my social circle for "the right kind of writer." It would have been easier when I was in my 20s and trying to establish a career as a magazine editor. Back then, I often used to put on a little black dress and go to those parties at George Plimpton's house on the East River, the ones where the men seemed ancient and addled and the young people were focused on the free food covering the pool table. I'd always been a little contemptuous of the hangers-on who sucked up to famous writers, but now I could see the error of my ways. A wiser climber would have seen them for what they were -- potential future blurbers.

But George Plimpton is dead and, three pregnancies later, my little black dresses don't fit the same, so instead I made a list of the kind-of-famous writers I kind of know and went to work. As luck would have it, I spotted one that very week at a book party for a novelist held in a swanky gallery on the Upper East Side. My target was a midlevel, moderately successful novelist who wrote the kind of smart, sophisticated books I imagined my reader might enjoy. The daughter of a famous novelist herself, she had no idea what total obscurity looked like, but I'd known her vaguely for years and we shared at least one mutual friend. Fortified by a glass of white wine, I made my way toward her.

"Hi," I said a little too brightly. Was it my imagination, or was she already moving away from me? After a few forced pleasantries, I brought up the book and asked if she might be willing to read it. The expression on her face -- part horror, part sneer -- was exactly what I would have expected had I released a large fart and asked what she thought of it.

"I'm really busy right now," she answered, turning her back. After that, I stuck to e-mail. Electronic humiliation is so much more tolerable.

I next approached a celebrated male novelist whose slacker anti-heroes could be Holden Caufield's grandchildren. At least, I think that's what the books are about. I've never actually read one, but I've seen the movies made from his books and always liked the soundtrack. Plus, he graduated from my boarding school a few years ahead of me, and we shared an affection for an English teacher who'd been a big influence, a connection I made sure to mention in my e-mail. When I was a magazine editor he also once sent me an article about dealing with your girlfriend's PMS, which I neglected to mention since I had declined to publish it.

His response came quickly. "Alas," he wrote, "I've been in a blurb free zone for years around here. Don't let your publisher tell you those things matter. They don't."

I quickly forwarded the e-mail to my editor, hoping she might now let me off the hook. During the editing process, I'd looked forward to her incisive comments and indefatigable pursuit of the mot juste, but now I cringed when I saw her name in my in box. Each day seemed to bring a fresh, unattainable target. What about Tom Perrotta? T.C. Boyle? Jane Smiley? One day, as a joke, I sent her an e-mail. "How about Philip Roth?"

Mostly, I heard nothing in response from the writers I contacted. And really, how can you blame them? On the whole, writers are underpaid, time-strapped and more than a little paranoid. Unbound manuscripts are bulky and hard to read. If they teach fiction, as many writers do, they're already being inundated by former students. And blurbing itself is a no-win situation. If you read a book and don't like it, you've made an enemy for life. If you like a book and write a flattering blurb, you're giving a leg up to the competition in a world that seems increasingly hostile to books in general and literary fiction in the specific. (The writer who snubbed me at that book party came out with a novel the very month my book was released. If you liked my book, Amazon.com thought you might like hers.)

It's no wonder most writers retreat behind a blanket no-blurb policy. Or a variation thereof -- my favorite rejection came from a glamorous blonde known for her books about her unwieldy New England family. "That's wonderful Rebecca has written a book," she told our mutual friend. "Unfortunately, I don't blurb books of people I know." For about three seconds, that seemed like a good answer, until I realized she might not blurb books for people she knows, but I guarantee you she isn't blurbing them for people she doesn't know.

In the end, I got my three blurbs. One was from David Rakoff, an old friend I've known since college who didn't really have a choice in the matter. The next came from Dani Shapiro, a well-respected, talented writer whose books are literary and sell well. She also happens to be the nicest woman in publishing. The third came from the writer Mary Morris, whom I have never met but whose work I have long admired.

I got to Morris through a friend who heard me bemoaning my lack of blurbs at a dinner party one night. (It's surprising how many of life's problems can be solved by publicly complaining.) The next day, my publisher messengered a manuscript to my friend, who knows Morris. Having been through this process half a dozen times, I had little hope, but a few weeks later Morris sent my editor an e-mail saying she had been taken with the book and would be happy to write a blurb. I was ecstatic.

So much of blurbing process is a corrupt quid pro quo. You praise my book; I'll praise yours. In the '80s, Spy magazine ran a monthly column on the very topic called "Log Rolling in Our Time." Having a total stranger read and compliment my book was a rare case of what blurbing should be in the best of all worlds -- an established writer helping out a novice for no other reason than she liked the book. Should I ever become famous enough to write a blurb for a writer of her stature, I already know what I'll say: Mary Morris writes like an angel.