MTV's "From G's to Gents" pits thugs against one another to see who can become the most refined. But what does it take to be a gentleman, anyway? 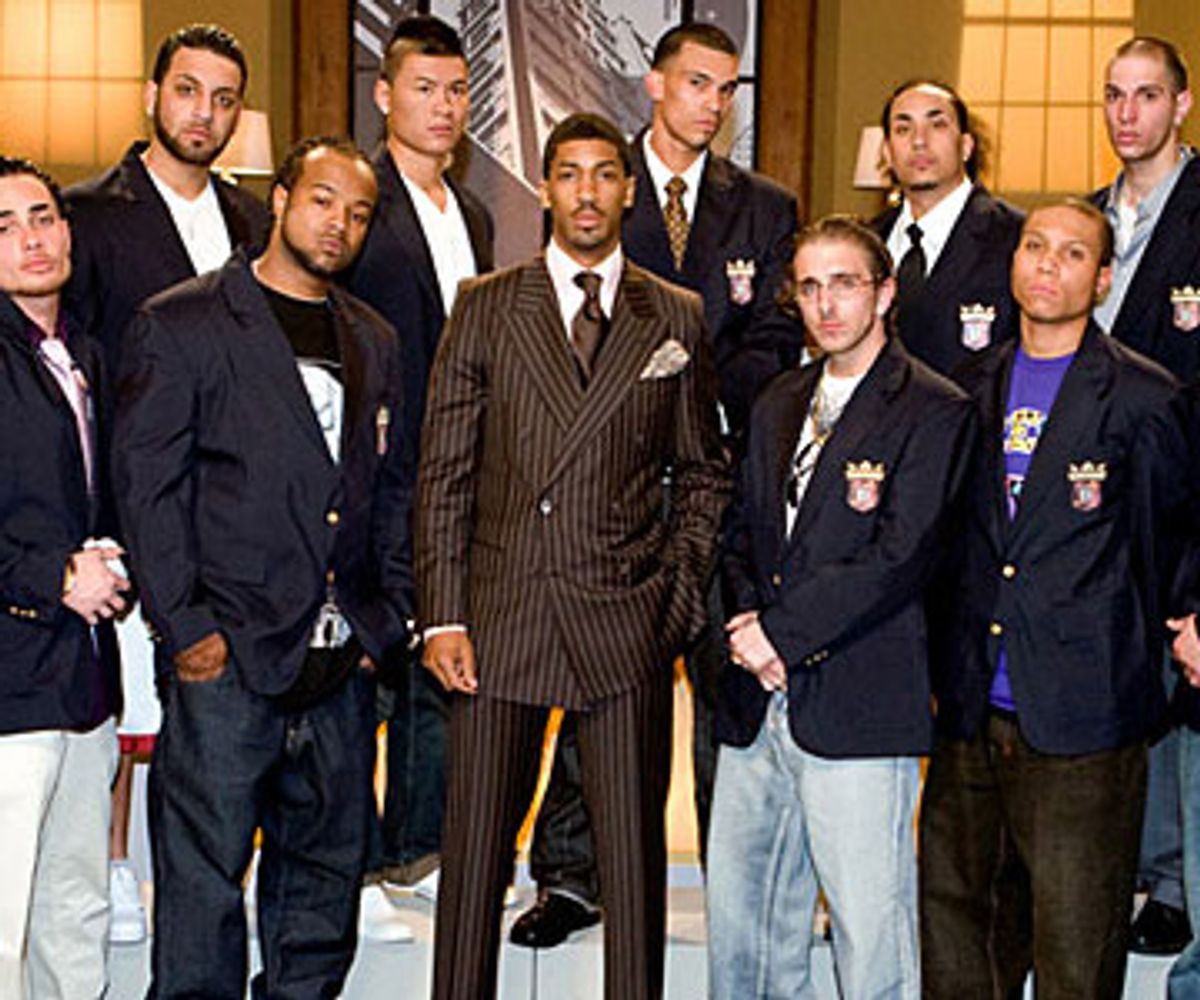 Today's kids can have everything they want, but first they need to learn some manners, if we're to take the message of a new crop of reality shows to heart. Even as Donald Trump's company prepares a "Pygmalion"-style makeover show for the ladies, MTV is airing "From G's to Gents," a stirring reality TV competition that pits 14 street toughs in a furious, angry, man-to-man battle to become ... genteel?

The show may or may not have taken its inspiration from the British program "Ladette to Lady," but the two series play against each other in peculiar ways. "Ladette" tossed crass, tarty, mainly white working-class women with a penchant for belching, cursing and flashing their boobs into haughty finishing schools, complete with crabby English schoolmarm types who tried to "Simon Cowell" the female hooligans until they came over all polite. The first season culminated in a fashion show, during which the ladettes attempted to pass for aristocracy among actual landed gentry, including a few posh bachelors who might accidentally marry them -- or so the presumption went.

"From G's to Gents" is the inverse image of "Ladette to Lady" in many ways: First of all, the backdrop is Los Angeles (not known as a city of manners) rather than the English countryside. Instead of Caucasians, "Gents" focuses on a rowdy group of multiethnic men, theoretically from disadvantaged backgrounds, all known by hip-hop handles like "Creepa," "D-Boy," and "The Truth." Assuming that good behavior is its own reward, the makers of "Ladette" didn't offer material prizes at first; instead they waited to surprise their first winner, Hayley Brisland, with a sports car. "Gents" never lets us forget the golden carrot of 100 G's hanging over these young guys' heads. They'd find marriage more of a threat than an incentive, and somehow sex never comes up in a serious way, either.

Because we often pretend that we can easily transcend class on this side of the big drink, the show has a far more nebulous concept of what an urban American dude needs to know to transform himself into a "gentleman." "Ladette" had it easier, falling rapturously into all the "My Fair Lady" clichés, unselfconsciously forcing the girls into cooking and sewing classes, giving them rigorous training in elocution and making them learn to walk with books on their heads, as if feminism never happened.

"From G's to Gents" shies away from using similar American archetypes as models for manhood, though. Perhaps the dandy's too effete, the old boy of the Ivy League too elitist and the Southern gentleman too problematic for angry men of color. With no real standard to shoot for, the question hangs in the air the whole time: What the hell is a gentleman, anyway? And what self-respecting G would aspire to his elusive standards? Instead, the show attempts to instill a cartoon version of refinement in the guys, picking and choosing from a variety of sources -- betting that neither the contestants nor the MTV audience will know the difference.

Nor could reconstituted sophistication find a better icon than the show's host, Fonzworth Bentley, former stylist to Kanye and P. Diddy's one-time "valet and personal assistant." Bentley began life in Atlanta as Derek Watkins -- a name that apparently didn't sound posh enough. Switching as he does between Cosby-ish sweaters and pastel-and-cream haberdashery, you can hardly blame the etiquette-school grad, author of "Advance Your Swagger" and penguin enthusiast for overprojecting ghetto fabulousness, having gained so much from it.

The show, interestingly, mixes bling attitude with a preppy premise -- think Tommy Hilfiger circa 1996. Everyone in the house supposedly belongs to "The Gentlemen's Club," headed by Bentley, for which they have been given a dark blazer with an embroidered crest, to be worn at all meetings. The show eliminates G's every week with challenges designed to test "leadership ability" and "sportsmanship," and augments these tasks with regular meetings with Bentley that swerve across the line between getting a scolding from the headmaster and meeting Dr. Phil. Each G also gets a wooden box with his name printed below it, and at elimination time, the group lobbies to vote individual members out of the house by dropping a "black ball" into the corresponding box (a symbol so loaded that no one dares to go there). Bentley makes the final decision about whether to cut a guy from the show, pumping up the show's lopsided subjectivity.

Even though the G's themselves don't spend much time or energy obsessing over the prize money, the desire for substance, experience or real education isn't kindling their authentic desire for transformation either. For "Shotta," who lived in his car before the show began taping, 100K would be gravy compared with sleeping in the same bed for a few consecutive nights. What drives these unsocialized macho men is a heartbreaking, pathetic need to imitate and impress Bentley, whose authority they never question, despite his wimpiness.

The guys' eagerness to look on Bentley as a father figure raises the stakes in a way that produces some of the show's most genuinely affecting moments and makes it easier to stomach the requisite high percentage of sheer exploitation and ridicule. The tenderness at the core of the project helps humanize these thugs -- the ones who need it most are desperate, committed to changing and painfully earnest about the show's ability to get them there. Somewhere. Anywhere.

"Kesan" has become one of the show's more controversial figures. Handsome and full of rage, he gets duped by self-described "guido" "Cee," who deviously draws an X in magic marker over his own photo in the club's hallway so that he can heap suspicion on Kesan and keep himself safe from elimination. Kesan narrowly escapes blackballing, after Bentley gives him a second chance, but receives so much negative attention from his peers that he decides to go AWOL. Remarkably, a tsunami of guilt suddenly washes over Cee, and his anguish about screwing Kesan over leads him to a tearful confession of his shady move to the group. Kesan and Bentley have a heart-to-heart, and the kid determines that he won't "go out without a fight" -- but this time, not a literal one.

Cee's choked-up pledge not to waste Bentley's time seems utterly heartfelt, in contrast to his earlier wiseguy attitude, though he still tries to cast aspersions on D-Boy as they face elimination. We get to see something amazing happen to him, psychologically, but only in fits and starts, and that makes his conversion seem genuine. As a television audience, we're accustomed to seeing "reveals" -- new people emerging during the course of a commercial break -- but "Gents" cannily shows us how much work it might take to transform this crew, and we get the sense that it might go on well beyond the scope of the show.

But into what will they get made over, and to what end? The dudes must walk a fine line around terms the show can't delineate very clearly. It's fun to see their macho behavior become a liability, as when they're forced to play street basketball with some rough-edged bruthas who could be the show's also-rans, and Bentley grades them on sportsmanship rather than baskets. But gentlemen can still be macho. In one-on-one conversations, Bentley peppers his speech with ghettoisms and gives hip-hop hugs, so he can't expect these guys to completely jettison the 'hood in them. What we're actually watching is Bentley teaching the G's to manage their propensity for violence.

Bafflingly, at one point he does it by showing them how to play cricket. Despite American stereotypes of British breeding, cricket can be a rough game, and isn't strictly an upper-class affair either -- were one of the guys of Jamaican or Pakistani background, he could have taught everybody a thing or two. And even if cricket could make a roughneck nicer, on the show, the more gentlemanly elements you've mastered, the less you'll appear to need the training, which could lead to elimination. "Mikey P" owns a four-bedroom house and dresses sharply, so out he goes. Asian b-boy "J-Boogie" works in a laboratory -- disqualified. On the other hand, "The Truth," an angry loudmouth, and "Pretty Ricky," a horny, belligerent alcoholic, get the boot on the first episode, even though they need the most help. The confusing criteria for making the cut make the program hard to predict but also suspenseful to watch. And not always in a rubbernecking kind of way.

Will 100K, a few weeks of a bewildering finishing school for boys and national exposure change a G to a Gent in any significant way? Probably, but less because he has learned to play cricket than because he has had the experience of reaching a mass audience and gained proximity to the influence and sympathy of Bentley and his social network. Executive producer Jamie Foxx, and West and Diddy's nattily dressed images, loom over the whole enterprise. But those guys (minus Diddy) had less to overcome, and they all have prodigious talent. Whereas MTV's G's have achieved cheap fame, arriving at an illusion of success by the dumb luck of being reasonably attractive, moderately thuggish and starved for a role model. Not, as the show's message would have you believe, from self-determination, belief in themselves and faith in God. Unless the winner proves that he's remarkable in other ways, those 1,000 Benjamins will vanish under a pile of empty 40-ounce bottles.