"The Sisterhood of the Traveling Pants 2" 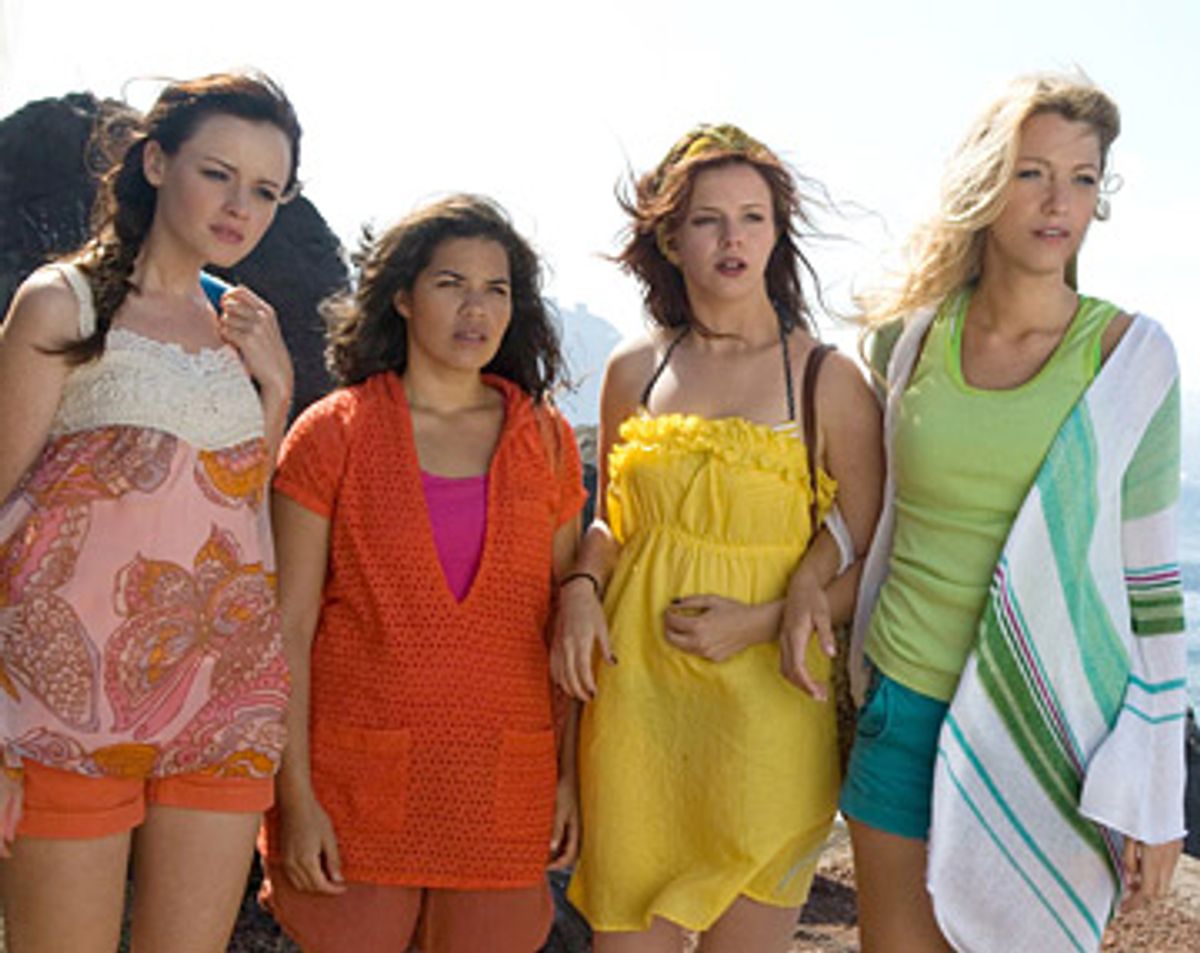 It's a relief to go to the movies and see teenage girls acting like teenage girls, as opposed to grown women acting like teenage girls. In "The Sisterhood of the Traveling Pants 2," there's no cooing over shoes, no coveting the "it" handbag. Although I'm not unilaterally against such things (I've been known to coo over a shoe or two in my day), in the movies I prefer them to be accessories to a narrative, not the backbone of it, and "The Sisterhood of the Traveling Pants 2" -- the follow-up to the similarly named 2005 feature -- is satisfying by itself as teen melodrama.

A young woman has sex for the first time, and the condom breaks: Is she pregnant? Another has an interest in archaeology, and has a chance to spend a summer digging in Turkey. But she's a little too self-absorbed to see the skulls she's unearthing as more than just bones: She doesn't realize that they're the remains of actual people, who had problems and longings not so far removed from hers. When you're watching a movie from the far side of 20, those may seem like negligible issues. But when you're actually living them, they're not, and director Sanaa Hamri and her four young actresses -- Alexis Bledel, Amber Tamblyn, America Ferrera and Blake Lively -- give them the appropriate amount of weight. This is a modern version of what used to be called "women's pictures," movies built around women's everyday (or not-so-everyday) difficulties and desires, and it fulfills its goals admirably. And face it: There are harsher sentences in life, and in the movies, than looking at attractive young people for two hours, spending a bit of time worrying about their problems instead of our own.

You don't need to have seen the first "Traveling Pants" movie to get the gist of this one, although the pants themselves do require a little explanation: Lena (Bledel), Carmen (Ferrera), Tibby (Tamblyn) and Bridget (Lively) are four friends who get along so well that they're even able to share a pair of jeans, embellished with patches and embroidery that say something about their respective lives. The jeans fit them all, we're told, "perfectly," which is stretching the metaphor, if not the actual pants: I doubt a single pair of jeans could fit all of these women perfectly, since they represent a variety of body types, but at least they're not all willowy twigs. When the four young women's lives take them in different directions, the pants connect them: They send the jeans around, in rotation, which makes them feel connected to one another even when they're far-flung.

Admittedly, the pants are a pretty ridiculous conceit, and the movie's ending suggests that the filmmakers, and even the characters, know it. (Both movies are based on the young-adult novels of Ann Brashares.) And at this point, to call these four young women here teenagers is possibly stretching it a bit: In "Traveling Pants 2," they've all finished their first year of college, which puts them right on the cusp of adulthood. Still, their lives are so unsettled, so not fully shaped, that it's clear they can't yet leave teenhood behind: Lena, the artistic one, has just finished her first year at Rhode Island School of Design, and although she's still getting over her good-looking ex, Kostos (Michael Rady), an Adonis-like model in her figure-drawing class (played by Jesse Williams) isn't an unwelcome distraction. Carmen, the sensitive, brainy Yale student, decides to spend the summer at a theater festival in Vermont, but not even the young hottie actor she meets there (played by Tom Wisdom) can divert her from the vague anxiety she feels about her family life, and the creeping distance she feels between herself and her three best girlfriends. Bridget, the athletic one, still in pain from her mother's death four years earlier, yearns to reconnect with her estranged grandmother. And Tibby, who's studying at NYU to become a filmmaker and spending the summer at a dull video store job, has some unresolved feelings about her sweet boyfriend, Brian (Leonardo Lam), who seems almost too perfect to be real.

Separated for the summer, the young women connect, by pants and by cellphone, but mostly, they're left to deal with their problems on their own. They'll learn that even as they grow older and need to drift apart in some ways, they can rely on one another -- but this isn't a movie in which the ending presents any earth-shattering revelations. What's pleasurable about it is watching the characters navigate their own rocky paths, and it doesn't hurt that the performers here are mostly charming: Tamblyn, in particular, a petulant punkette in an assortment of thrift-store outfits, is a lively presence, and Ferrera can almost get by on her low-key smile alone.

Director Hamri (who made the enjoyable and intelligent 2006 interracial romance "Something New"), and screenwriter Elizabeth Chandler sometimes drop a few threads of the crisscrossing plot, but the movie's openheartedness makes up for its flaws. The sluggish ending does seem a bit tacked on -- but then, it was shot on location in the Greek islands (the character Lena has family ties there), so at least we have all that sun-drenched scenery as a distraction.

The picture also makes space for some engaging second bananas including Kyle MacLachlan, amusing as a fussy theater director; Shohreh Aghdashloo (the earthy beauty with the throaty voice who made such a splash in the 2003 "House of Sand and Fog") as a wise archaeologist; and the always-stunning Blythe Danner, who, even though she's playing a grandmother here, retains much of her own youthful beauty -- and that great, honey-soaked voice hasn't aged at all. Danner plays the kind of woman who any of these younger women might someday grow up to be, making their own mistakes along the way. Her character has some flaws, some roughness around the edges, but that's her right, and "The Sisterhood of the Traveling Pants 2" allows its women that latitude. The pants may stay the same size, but at least the characters are allowed to grow.