Forging the missing case for war 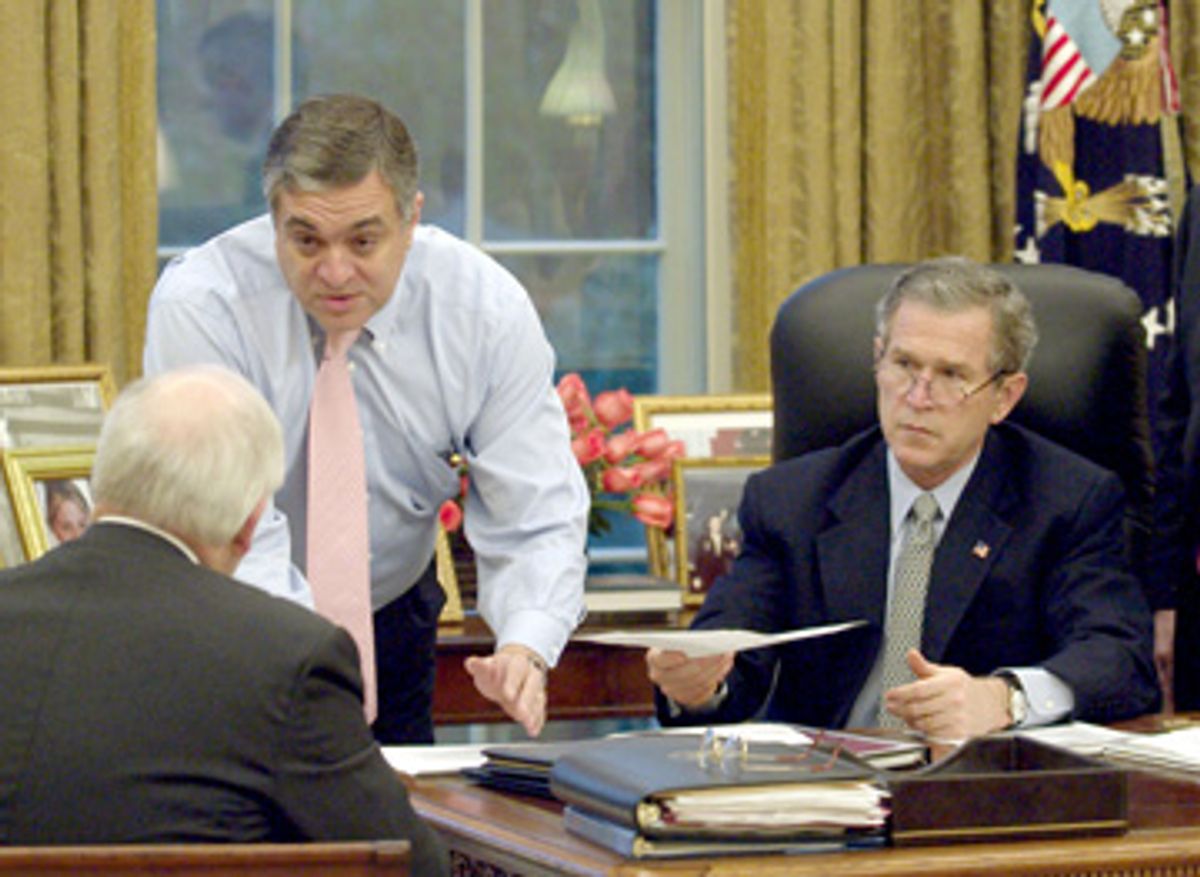 Ron Suskind is really good at burying a lede.

Diligent, linear-minded readers will have to ford through 370 pages of his alternately incisive and gauzy book, "The Way of the World: A Story of Truth and Hope in an Age of Extremism," to reach the accusation that has set the nation's blogs abuzz. In September 2003, according to Suskind, CIA officials -- at the direct command of then-CIA director George Tenet and at the behest of the White House -- deliberately forged a backdated letter from Iraqi security chief Tahir Jalil Habbush to Saddam Hussein. The phony letter claimed that 9/11 ringleader Mohammed Atta had trained for his mission in Iraq and that al-Qaida had facilitated mysterious shipments from Niger to Iraq. The letter was the "slam dunk" the Bush administration had been seeking so desperately: evidence of a direct operational link between al-Qaida and Saddam's regime.

Leaked to conservative British journalist Con Coughlin, the letter was made public just as Saddam was captured in his spider hole near Tikrit. In the course of a single news cycle, the war against Saddam had been "vindicated," Saddam himself had been flushed from hiding, and the Bush administration's war had seemingly reached its triumphal and foregone conclusion. Or had it?

To further refine the question: Did nobody think it remarkable that an intelligence chief would commit such damning information to paper and then sign it in his own hand? Well, yes, some did. Among journalists, Newsweek's Michael Isikoff and Mark Hosenball were particularly skeptical, citing FBI evidence that Atta was somewhere else entirely during the period in question. But none of those opposition voices made it into the über-narrative so skillfully managed by the White House.

Since then, that narrative has unraveled thread by thread -- as has the Habbush letter. That it was a forgery can no longer be doubted; that it originated with the White House may be harder to prove. Two former CIA officials -- Rob Richer and John Maguire -- have gone on record as saying they were personally charged with carrying out the forgery, but their marching orders, if they existed, came directly from Tenet (who has fiercely denied the story). The closest thing Suskind has to a smoking gun is Richer's memory, five years later, of "looking down at the creamy White House stationery on which the assignment was written." But here, too, a skeptic's antennae begin to quiver: Why would an operation so patently illegal be printed on official stationery? It's worth placing Richer's and Maguire's charges, too, in the context of the often-rancorous relations between White House officials and CIA veterans, who have seen their sphere of influence severely curtailed in post-9/11 reorganizations.

Setting these reservations aside, let's assume for a moment that the charges are true. What then? Suskind suggests that "the White House's knowingly misusing an arm of government" would be "the sort of thing generally taken up in impeachment proceedings." Whether or not the impeachment drums start beating in earnest, it's hard to imagine anyone saying, at this stage of the game, that the White House couldn't have done what Richer and Maguire say it did. This is an administration, after all, that lost all its moorings the moment it fixed its compass on Saddam. Since then, it has selectively misread evidence, imprisoned hundreds of innocent men, and tried to stifle opposition in every quarter. How great a leap is there, finally, between quashing dissent and manufacturing support?

The irony is that if White House honchos had listened to what Habbush was really saying instead of putting (or wishing) words in his mouth, they might have avoided the war that destroyed their political fortunes. As early as January 2003, writes Suskind, Habbush told a British intelligence officer that Saddam, 12 years earlier, had both ended his nuclear program and destroyed his chemical weapon stockpile and was in no hurry to build them up again. "They're not going to like this downtown," said Tenet, referring to his Pennsylvania Avenue bosses. They didn't. The Habbush report was buried, the war was set in motion, and Habbush himself was spirited to Amman, Jordan, where he was placated with $5 million in CIA hush money (even as his picture showed up as the jack of diamonds in Bush's playing deck of Iraqi war criminals).

The Habbush episode is the most spectacular case study in Suskind's book, but it's by no means the most depressing. Consider: In September 2002, Iraqi foreign minister (and paid French spy) Naji Sibri told a Lebanese intermediary that Saddam really, truly, honestly didn't have any WMD. Somehow, in transcribing the findings, the CIA's New York station wrote up a conclusion that was directly opposite to what Sibri had said. The unsourced findings were then passed on to British intelligence and, in what Suskind calls "an amazing game of Telephone," helped undergird Tony Blair's later support for the Iraq war.

Consider, too: In the summer of 2003, Iranians suspended part of their nuclear weapons program and signaled they were ready to talk to the United States about the al-Qaida cell within Iran's borders (which was then trying to purchase Russian nukes) and U.S. anti-terror efforts in Afghanistan. British intermediaries duly set up a Geneva meeting between an Iranian delegation and the CIA. Unfortunately, operations director Jim Pavitt, failing to understand that flights from Andrews Air Force Base could get backed up, arrived hours late in Geneva -- then went to the wrong hotel. "Soon," writes Suskind, "the British were on the line, frantic, wondering, 'Where the hell is Pavitt?'" Livid at the snub, Iranians abruptly cut off talks and, from that moment, "acted with a kind of entrepreneurial zeal -- harboring al Qaeda, sending troops and weapons across the border to undermine the United States in Iraq, defying U.S. demands that they cease uranium enrichment, even sending arms to support the Taliban."

Suskind has relied heavily on the testimony of CIA officials, many of whom have since left public service (Richer became vice president of intelligence for the notorious Blackwater) and all of whom have concluded that the U.S. government is a broken institution. Suskind has, by all appearances, reached the same conclusion. And he is at pains to compensate for it, for "The Way of the World" tucks away its nuggets of bad news in a meringue of feel-good "vision" -- a look at how things could be.

The United States, Suskind argues, can no longer hope to hammer its foes into submission. It must "rediscover its original, transforming principles" by embracing and cross-fertilizing with "the other." To show how such a future would look, Suskind creates a weave of human-interest threads: an Afghan exchange student, a Pakistani émigré, a lawyer for Guantánamo detainees, a rogue U.S. bureaucrat trying to stem nuclear proliferation -- even the late Benazir Bhutto -- all of them "joining the battle to revive hope, reasonable hope, shared and generous hope; to light a path to mankind's best instincts, to the consistent and often inconvenient humility and generosity -- the beating heart of moral energy -- that has saved us in the past."

Be still that beating heart, for it turns up a bit too often for comfort. We can admire Suskind for wanting to do more than catechize political abuses while still acknowledging that utopianism is not his true idiom. His normally rigorous language grows increasingly soggy as he talks about "vast heartbeat migrations" and people who "bend toward the sunlight, like all living things" and who come "to the shores of a vast, challenging place, discovering their truest potential, and re-creating, over and over, a new world." ("A thousand points of light," I heard myself saying, uncharitably.)

Bending toward the sunlight is all well and good, but we equally need people to find the places where the sunlight doesn't reach, and no journalist has more ably explored the dark crevices of the Bush administration's foreign policy. In "The One Percent Doctrine" and, more fitfully, here, Suskind has shown that faith -- the wrong kind of faith, anyway -- can produce disaster. That Suskind should want to replace the old faiths with new ones is understandable. But we still need him to explore faith's limits. Now is not the time to go soft on us.