Osama bin Laden's driver has been tried and convicted. But what's the verdict for the Bush administration's tactics in the war on terror? 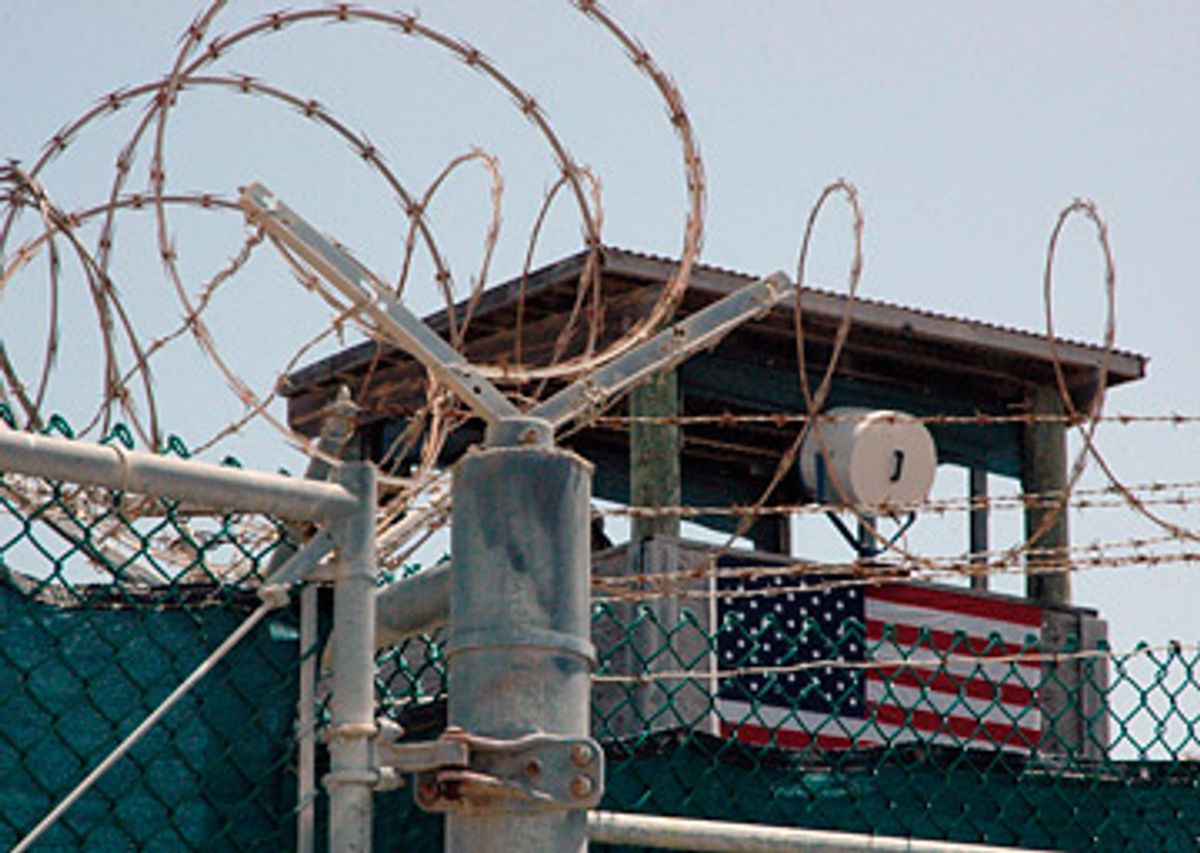 When the verdict in the first U.S. military commission trial since World War II came down Wednesday, no one who had been following the proceedings was surprised to hear that Osama bin Laden's former driver and bodyguard was found guilty. The six-person jury of military officers from the Army, Navy, Air Force and Marines convicted Salim Ahmed Hamdan of providing material support for terrorism, but acquitted him of charges of conspiracy to support terrorism. They will determine his sentence in separate proceedings later this week.

Their decision came after two weeks of proceedings, at times bizarre, in which they listened stonefaced to testimony from several FBI agents, an investigator from the Navy Criminal Investigative Service, experts on war crimes law, a university professor specializing in central Asian history, military officers who served in Afghanistan, and even testimony from Khalid Sheikh Mohammed, the alleged mastermind of 9/11 (who submitted written answers to questions).

The prosecution tried to portray Hamdan as a member of Osama bin Laden's inner circle who knew full-well al-Qaida's intentions and helped make the 9/11 terrorist attacks possible by serving as his loyal driver and bodyguard. They said he was a committed ideologue who pledged "bayat" -- a solemn oath -- to bin Laden and that he was charged with driving the getaway vehicle should bin Laden's convoy ever come under attack.

"Salim Hamdan was al-Qaida's last line of defense," said John Murphy, one of several government prosecutors. "He was a bayat-pledged al-Qaida warrior who was captured on the battlefield bringing weapons to the front."

The defense, by contrast, portrayed Hamdan as one of seven lowly drivers, a Yemeni with a fourth-grade education who performed a simple duty in exchange for wages. They claimed that he had never sworn a loyalty oath to bin Laden. They also said he was a cooperative witness who offered to help U.S. investigators find senior al-Qaida leadership -- in other words, someone who should have been given a deal to help the United States capture and convict senior al-Qaida members.

"Mr. Hamdan was a salaried employee," said Navy Lt. Cmdr. Brian Mizer, part of Hamdan's four-man defense team, adding that much of the time Hamdan was working for bin Laden, he didn't even know where he was driving. "No one is going to say a conspiracy didn't happen, but Salim Hamdan is not part of it. This is a classic case of guilt by association," Mizer said.

Ironically, although he was sitting in the dock, Hamdan did not have much riding on the trial. Even if the jury had acquitted him of all charges, he could be imprisoned indefinitely at Guantánamo because the Bush administration maintains that it can continue to hold enemy combatants until the end of the "global war on terror." Hamdan's lawyers argued from the get-go that their client didn't have much of a chance because the military commissions' rules were stacked against him. But they mounted a spirited and vigorous defense nonetheless, both to defend their client and also to expose the flaws in a system they believe makes a mockery of justice.

The prosecution, too, knew that it was the heavily criticized military commissions and the Bush administration's "war on terror" policies that were on trial as much as Hamdan was, so it went out of its way to suppress or classify any evidence that exposed U.S. cruelty, mistreatment and possibly even ineptitude. (It was aided in its efforts by a courtroom censor, James Powell, the Office of the Military Commission's security officer, who pressed a button that flashed a red light on the judge's bench whenever the defense uttered something that he thought should be classified.)

It was with that backdrop that both sides entered the makeshift courtroom on the top of a hill overlooking the Caribbean to make their case.

The defense began the trial at a disadvantage. Although it had requested, and the government was ordered to provide, all records relating to Hamdan's confinement in Afghanistan and at Guantánamo, they were not forthcoming. The prosecution provided some 600 pages of detention records (all classified as secret) nine days before the trial, and another 500 pages at 9:15 p.m. the night before the trial. Some continued to trickle in as the trial was under way. Others never arrived at all.

The documents arrived in what the defense said were "three data dumps," not grouped into any category, not in any chronological order, much of it undated, full of acronyms, and sometimes with no indication of how they related to the accused. So the defense team was left "feverishly trying to comb through these records" while at the same time conducting the defense.

"You can't have a trial when you don't have discovery," said a furious and flustered Michael Berrigan, deputy chief military defense lawyer, referring to the government's failure to hand over the needed documents. Berrigan added that the defense still didn't have the names of all the agents who interrogated Hamdan while he was in U.S. custody in Afghanistan and Guantánamo.

Things began looking up for the defense when the military judge presiding over the trial, Navy Capt. Keith Allred, sanctioned the government for not providing the documents. Not long after, he ruled that he would not permit into the trial statements Hamdan made to interrogators because there was evidence that they were coerced.

However, the government wanted to put Robert McFadden, a special agent with the Naval Criminal Investigative Service, on the stand to testify about a March 2003 interrogation of Hamdan. The prosecutor argued that he could provide "clear and convincing evidence" that nothing elicited from that interrogation was coerced.

The judge allowed the government to make its case. Without the jury present, McFadden, square-jawed, calm and with a dry sense of humor, described what he said was a cordial, friendly and "free-flowing" conversation on May 17, 2003, in which Hamdan admitted that he had pledged bayat to bin Laden and that he was carrying missiles to bin Laden when he was captured.

The defense scrambled to show that McFadden's testimony shouldn't be admitted by arguing that even though McFadden may not have used coercion, Hamdan had been sexually harassed by a female interrogator and subjected to a program of sleep deprivation in the days prior to McFadden's interrogation. (The defense provided documents showing this, but they were deemed classified and could not be discussed in open court.) The defense also pointed out that Hamdan had been interrogated by 40 other agents from 12 different agencies, and had not admitted pledging bayat to bin Laden to any of them.

The judge ruled in favor of the prosecution and allowed McFadden to testify. Unfortunately the public will never know Judge Allred's rationale. In a document that must be embarrassing to even the most staunch defenders of the military commissions, four of the five pages of Allred's opinion were redacted in a sea of black ink.

For months leading up to the trial, the defense had said that it planned to call on Khalid Sheikh Mohammed and other so-called high-value detainees being held at Guantánamo to testify about Hamdan's position (or lack thereof) in al-Qaida. Negotiations to bring Mohammed and others to the courthouse proved difficult, in part because of security concerns. The government maintains that because of the interrogation techniques Mohammed was subjected to, anything he says is presumptively classified. In addition, only one of Hamdan's four lawyers had the necessary clearance to interview Mohammed and other high-level detainees.

In the end, Mohammed said he didn't want to appear, but he agreed to answer written questions presented to him by Hamdan's defense team. Mohammed depicted Hamdan as a low-level servant and denied that Hamdan had advance knowledge of or played any role in planning the 9/11 terrorist attacks.

"He was not a soldier, he was a driver. His nature was more primitive (Bedouin) person and far from civilization. He was not fit to plan or execute. But he is fit to change trucks' tires, change oil filters, wash and clean cars, and fasten cargo in pick up trucks. He could tighten bolts, and could select the best car maintenance shop."

Mohammed's further comments lent some odd and eerie color to the testimony: "We did not fall from the sky to be an organization and had a base; we are a human organization, not an organization of ghosts. We fight humans not ghosts. We have interests in life ... So from the 9/11 operation you need to be practical. It is illogical to think that everyone from Al-Qaeda is a conspirator or a terrorist. Because we have business projects, educations, [sic] and mass media, we could confront you for the eight years consecutively ... We are not gangs. On the contrary, we are a realistic organization on earth."

The prosecution countered that Mohammed's statements -- and those of other al-Qaida members -- were not reliable and that the jury should not give them credence.

Some of the most compelling testimony might have come from Special Forces psychologist Col. Morgan Banks -- I say "might" because his testimony was classified, so anyone who did not have a top-secret security clearance had to leave the courtroom when Banks took the stand. What he said on the stand remains unknown.

Trial observers asked the court for a redacted transcript of the testimony and Judge Allred requested that of the clerk, but as with the discovery for the defense, it has yet to be produced. As of Tuesday, it was still being reviewed by those responsible for declassification.

However, what we do know from defense counsel is that Banks was in Afghanistan as part of the implementation of a secret interrogation regime based on the military's Survival, Evasion, Resistance and Escape program (SERE) when Hamdan was held there. The SERE program was also used to advise the military on interrogation techniques at Guantánamo.

Despite the secrecy shrouding Banks' testimony, Hamdan's defense team later revealed that Banks testified that Hamdan, apparently under such threat, had begged interrogators not to rape his wife or kill his family, and that in the days when U.S. forces were still on the hunt for Osama bin Laden and the other top al-Qaida leadership in Tora Bora, Hamdan made what was referred to as "a significant offer of cooperation." The defense said that the United States, not Mr. Hamdan, squandered that offer, and wondered whether Hamdan might have led the U.S. to capture bin Laden himself.

In its closing arguments, the defense reiterated its claim that Hamdan was a lowly driver, a "hired hand," and did not play any critical role in al-Qaida. Defense counsel emphasized that Hamdan had been a cooperative witness, and had the U.S. not chosen to prosecute him, he might have been extremely useful in the war on terror.

"He's the guy who drove around the guy who did the planning," said Joseph McMillan, another of Hamdan's lawyers. But McMillan added that under the prosecution's theory of providing material support to terrorism, thousands of people could be tried, including "the butcher, the baker and the candlestick maker."

The jury, it seems, agreed.