Why are gymnasts so young?

Half of the Chinese "women" may be under the minimum age of 16. Something's wrong when you have to be a kid to win. 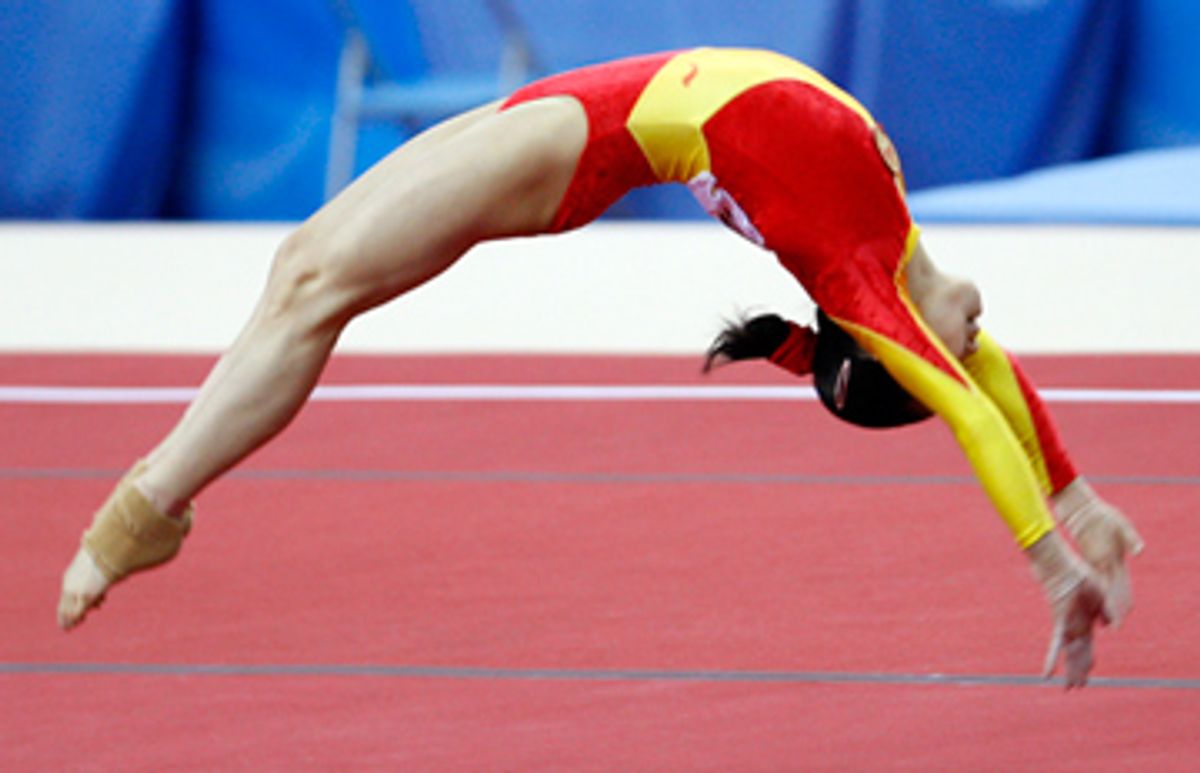 Jiang Yuyuan of China performs on the floor during the women's individual final at the Doha Gymnastics World Cup in March. She won the gold medal.

The early controversies at the Beijing Olympics have been about China's human rights record, but with the games about to begin, it goes without saying that there have been some dust-ups in gymnastics. The biggest hoo-ha so far is around three female Chinese gymnasts -- half the team -- who are suspected of being under the minimum age of 16.

China and the United States are expected to battle it out in the deceptively titled Women's Gymnastics event, as they did at the 2007 World Championships, where the U.S. prevailed by less than a point.

The New York Times reported last month that records suggest He Kexin and Jiang Yuyuan, both listed as 16, might be as young as 14. The Associated Press reported this week that online documents show that Yang Yilin will turn 15 later this month.

The age restriction is in place to protect kids from injuries and the pressures of elite competition. They're an effort to preserve the general health, well-being and endurance of the wunderkind, to prevent burnout. You can see how this wouldn't be a major priority for China, given its history of human rights violations. This is a comparative fly in the ointment.

It isn't hard to imagine that China might fake passports for these girls in order to win. But the important question is: Why does being younger provide an advantage for a female gymnast?

Nellie Kim, a five-time Olympic gold medalist for the former Soviet Union, says it's because they're lighter and more fearless, which allows them to perform more difficult maneuvers. Kim was 23 when she competed in her final Olympics in 1980, where she won two golds.

But does youth actually enable success or is it simply the accepted aesthetic today? Is young better or simply prettier?

This battle over age is not a new one in gymnastics. The age has gone up and down over the years. It goes up in the name of protecting the very young. It goes down to allow young standouts to compete. Nadia Comaneci was only 14 when she bested Kim, who was 19, in the all-around in the 1976 Olympics. And Nadia's appeal was largely in her youth and sprightly appearance. It made for great television and commercial success for those games.

In a recent New York Times article, Bela Karolyi, famed coach of Comaneci and Mary Lou Retton, recalls a North Korean gymnast who showed up at the 1991 World Championships with two missing front teeth. He argued she was younger than 11, not having sprouted her adult teeth yet. Her coaches claimed that she'd simply lost those front teeth in an accident on the uneven bars. Which is worse, underage or front teeth knocked out on bars? But that's another story.

The real issue isn't haggling over whether these girls are of age. It's the fact that this is a sport that idolizes prepubescent and underweight girls.

Gymnastics, in its obsession with both being and looking young, embodies our culture's obsession with youth, where the over-the-hill are dismissed as out of touch, less able-bodied and sharp-minded and ready to put out to pasture.

In my view, the broader issue is that this sport promotes an aesthetic in which only children -- or those willing to delay puberty to look like children -- can be successful. This creates an exceedingly narrow window of opportunity, whether these girls are 14 or 16.

Either way, they've likely been training as intensely as elite athletes since they were 6 years old, hoping to win the race against the clock to make the Olympics before high school ends. In the race against puberty, a perfect storm is created where eating disorders can flourish, athletes train with injuries in the rush to get back in the gym before "game over" tolls at the ripe old age of 19, coaches who care only about the medals their young protégés can secure are quietly permitted to put the health and well-being of children aside.

It is the sport's idolatry of youth, the disposability of the not-quite-so-young, mirroring our culture at large, that I find troubling. In the grand scheme of China's offenses, this is a mere pittance.