"Elegy" for a topless bombshell 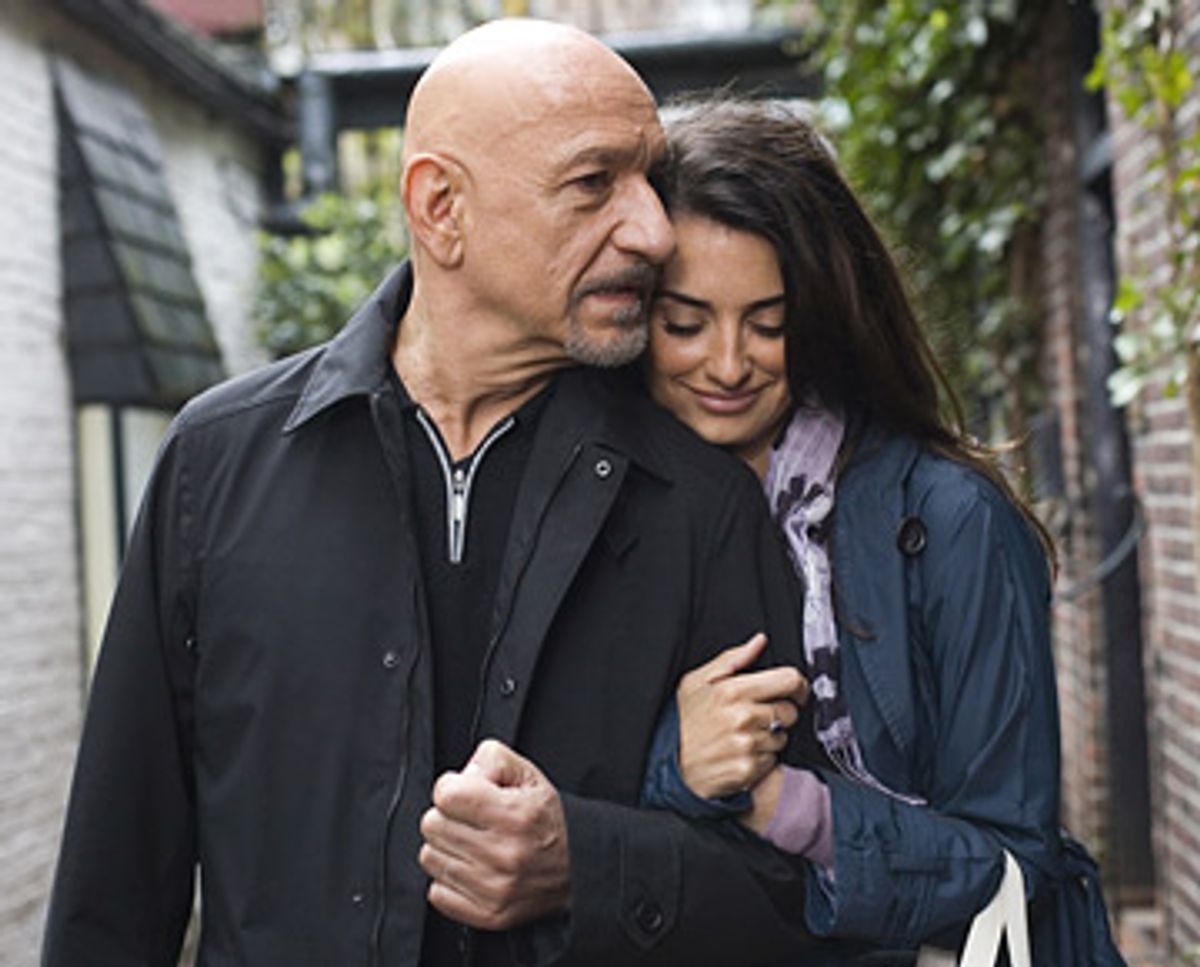 Ben Kingsley as David Kepesh and Penelope Cruz as Consuela Castillo in "Elegy."

I'm finally dragging my ass to the task of writing about "Elegy," a film adaptation of Philip Roth's novel "The Dying Animal" that's a curious hybrid indeed. It offers Ben Kingsley and Penélope Cruz in the best performances of their recent careers, as an older professor and his ex-student turned lover (and, as advertised, there are long, contemplative, art-history-lecture style shots of Cruz's naked torso). This coupling is gracefully handled by Isabel Coixet ("The Secret Life of Words," "My Life Without Me"), a Spanish filmmaker with an exquisite visual sensibility and a reverent, slightly over-precious approach to her craft.

Then there's the screenplay by Nicholas Meyer, a Hollywood veteran whose career includes three "Star Trek" movies and a best-selling Sherlock Holmes novel, along with a previous Roth adaptation ("The Human Stain"). He sticks closely to the characters and story of "The Dying Animal," arguably one of Roth's bleakest and most misanthropic novels -- until the end of the film, when Meyer cooks up a completely new, movieland-style denouement. The movie that results from blending all these ingredients, while excellent in many technical respects, is a muted, pretty, anesthetic concoction that's never fully satisfying.

That said, the complementary but completely different performances by Kingsley and Cruz are worth seeing, and Coixet gets full credit for dragging both of them out of their comfort zones. As the 60ish cultural scholar David Kepesh, Kingsley has a fire and vivacity I haven't detected in his recent roles since "Sexy Beast." He can't seem to play Americans without resorting to mannered, tic-laden performances like those in "The Wackness" and "You Kill Me," but Kepesh (at least in his film incarnation) isn't quite an American. He's a suave, trans-Atlantic transplant, a British Jewish intellectual hardened to a point by his years in New York academia. He trades quips with Charlie Rose and presides, in lordly fashion, over graduate student gatherings.

It's at one of these parties in his implausibly grand Manhattan apartment -- OK, he's sold some books and hosts a radio chat show, but still -- that Kepesh makes his move on Consuela Castillo (Cruz), who's just completed his class and is hence fair game. He likes her not just because she's a smokin' Latin bombshell but because her composure and affect identify her as a fellow outsider. She's a Cuban immigrant from a conservative background who looks and dresses like a high-end legal secretary, which is what she was before deciding to pursue an academic career. Whether or not it's because the director is a Spanish woman, this is Cruz's breakthrough English-language performance. Consuela is a difficult character, both a sheltered flower and a confident intellectual, but Cruz anchors her in a soulful certainty.

Say whatever you want about the ickiness of the older man-younger woman dynamic, but it doesn't seem mysterious that Consuela responds to Kepesh and even falls in love with him. He's a cultured and worldly man, an intellectual mentor, and also a man who withholds himself emotionally, a conscious or unconscious tactic that, in movies as in life, tends to drive women nuts. It's somewhat less clear precisely why Kepesh keeps excusing himself from dates with Consuela's parents, never introduces her to his best friend -- a Pulitzer-winning poet played delightfully by Dennis Hopper -- and refuses to end his no-strings sexual relationship with a divorced friend (Patricia Clarkson). I suppose the murkiness is intentional, but it leaves the psychological center of the story uncertain.

Coixet's individual images are marvelous constructions (as captured by cinematographer Jean-Claude Larrieu), and she frames the human face with a Bergmanesque intensity. But she's such a fussy filmmaker, never using one shot when five will do, that I think she subtly exhausts the viewer and drains the picture of vitality. It's a little like bombing through the Prado until your feet hurt, instead of taking your time and absorbing the work in a couple of galleries. Speaking of art museums and the female nudes often found therein, the already-famous lingering shots of Consuela's breasts capture them as something akin to a wondrous work of Creation, but completely without prurience. Perhaps the feminist idea that the "female gaze" is intrinsically different is valid after all. Whether Coixet's gaze is meant to capture Kepesh's simultaneously lascivious and infantile obsession with Consuela's poitrine or some objective, aesthetic perspective is once again not quite clear.

Between the marvelous lead performances and the arty, enervated feeling of the mise-en-scène, "Elegy" is already a mixed bag. But the filmmakers lack the courage to stick with Roth's original gloomy conclusion, so while Consuela, Kepesh and the latter's estranged son (Peter Sarsgaard) face the same crises as in "The Dying Animal," the whole sour, Rothian mess of cowardice and mortality is finally wrapped in pink tissue paper and presented to us in a tasteful gift box. There's an inordinate amount of talent on display in "Elegy," but it ultimately reveals itself as an upper-middlebrow commercial concoction. It's beautiful, but nobody involved was ever sure what the movie was actually about, or why they were making it.

"Elegy" is now playing in New York, Los Angeles and other major cities, with wider release to follow.