What was an Iraqi politician doing at CIA headquarters just days before he distributed a fake memo incriminating Saddam Hussein in 9/11? 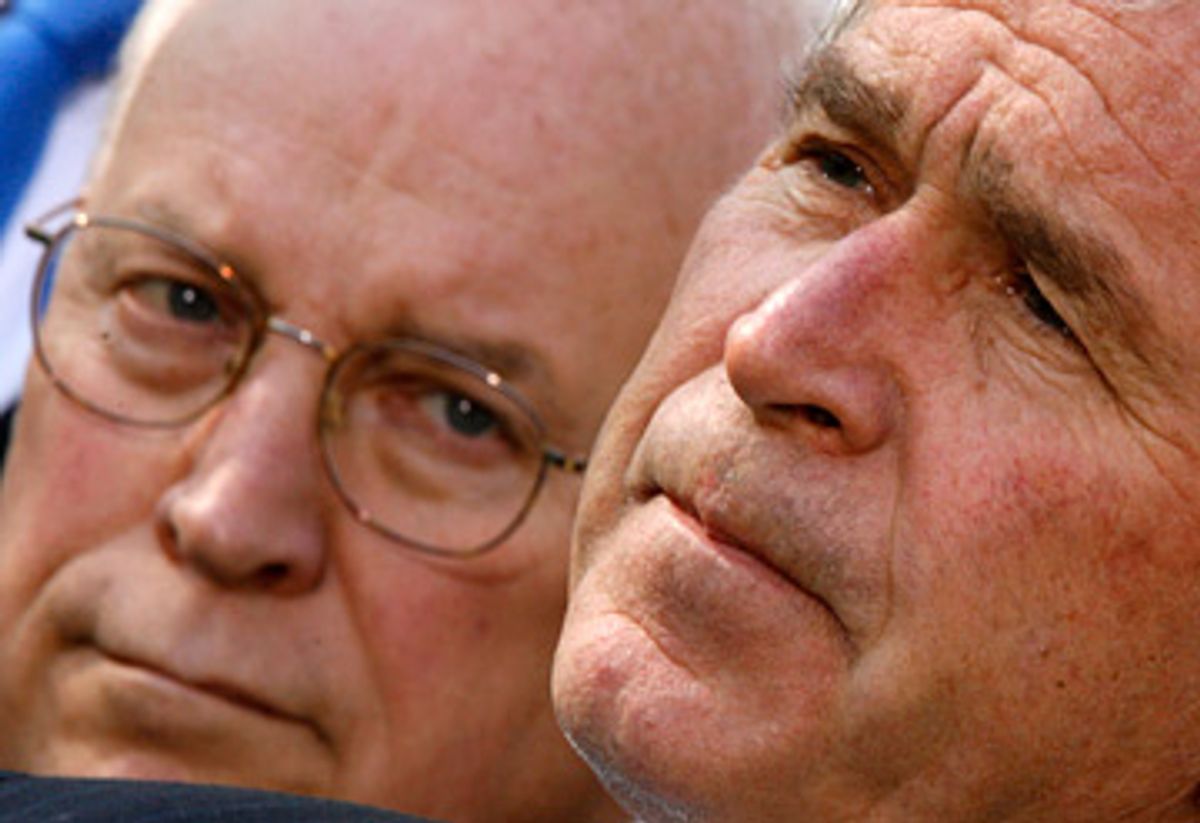 If Ron Suskind's sensational charge that the White House and CIA colluded in forging evidence to justify the Iraq invasion isn't proved conclusively in his new book, "The Way of the World," then the sorry record of the Bush administration offers no basis to dismiss his allegation. Setting aside the relative credibility of the author and the government, the relevant question is whether the available facts demand a full investigation by a congressional committee, with testimony under oath.

When we look back at the events surrounding the emergence of the faked letter that is at the center of this controversy, a strong circumstantial case certainly can be made in support of Suskind's story.

That story begins during the final weeks of 2003, when everyone in the White House was suffering severe embarrassment over both the origins and the consequences of the invasion of Iraq. No weapons of mass destruction had been found in Iraq. No evidence of significant connections between Saddam Hussein's regime and the al-Qaida terrorist organization had been discovered there either. Nothing in this costly misadventure was turning out as advertised by the Bush administration.

According to Suskind, the administration's highest officials -- presumably meaning President Bush and Vice President Cheney -- solved this problem by ordering the CIA to manufacture a document "proving" that Saddam had indeed been trying to build nuclear weapons and that he was also working with al-Qaida. The reported product of that order was a fake memorandum from Tahir Jalil Habbush, then chief of Saddam's intelligence service, to the dictator himself, dated July 1, 2001. The memo not only explicitly confirmed that 9/11 hijacker Mohammed Atta had received training in Baghdad for "attacking the targets that we have agreed to destroy" but also carefully noted the arrival of a "shipment" from Niger via Libya, presumably of uranium yellowcake, the sole export of that impoverished African country.

Very incriminating, very convenient and not very believable. Indeed, it may be hard to imagine that even the CIA at its bumbling worst would concoct such a blatant counterfeit. But there are a few reasons to believe that, too.

On Dec. 14, 2003, the Sunday Telegraph hyped the phony Habbush memo as a front-page exclusive over the byline of Con Coughlin, the paper's foreign editor and chief Mideast correspondent, who has earned a reputation for promoting neoconservative claptrap. As I explained in a Salon blog post on Dec. 18, the story's sudden appearance in London was the harbinger of a disinformation campaign that quickly blew back to the United States -- where it was cited by William Safire on the New York Times Op-Ed page. Ignoring the bizarre Niger yellowcake reference, which practically screamed bullshit, Safire seized on Coughlin's story as proof of his own cherished theory about Saddam's sponsorship of 9/11.

Soon enough, however, the Habbush memo was discredited in Newsweek and elsewhere as a forgery for many reasons, notably including its contradiction of established facts concerning Atta's travels during 2001.

But the credulous Telegraph coverage is still significant now, because Coughlin identified the source of his amazing scoop as Ayad Allawi. For those who have forgotten the ambitious Allawi, he is a former Baathist who rebelled against Saddam, formed the Iraqi National Accord movement to fight the dictator, and was appointed to Iraq's interim Governing Council by the U.S. occupation authorities after the invasion.

Although Coughlin quoted Allawi at some length, neither he nor his source revealed how the Habbush memo had fallen into the hands of the Iraqi politician. But the Safire column made an allusion that now seems crucial, describing Allawi as "an Iraqi leader long considered reliable by intelligence agencies."

Specifically, Allawi was a longtime asset of the Central Intelligence Agency, which had funded his struggle against Saddam for years prior to the invasion. His CIA sponsorship is noted in nearly every news article about Allawi, usually contrasted with the Pentagon sponsorship of his political rival, Ahmed Chalabi, the infamous fabricator of WMD intelligence (and suspected double agent for Iran).

Obviously, Allawi's relationship with the CIA is worth reconsidering today in light of the charges in Suskind's book, even though by itself that relationship proves nothing. There is more, however.

On Dec. 11, 2003 -- three days before the Telegraph launched its "exclusive" on the Habbush memo -- the Washington Post published an article by Dana Priest and Robin Wright headlined "Iraq Spy Service Planned by U.S. to Stem Attacks." Buried inside on Page A41, their story outlined the CIA's efforts to create a new Iraqi intelligence agency:

"The new service will be trained, financed and equipped largely by the CIA with help from Jordan. Initially the agency will be headed by Iraqi Interior Minister Nouri Badran, a secular Shiite and activist in the Jordan-based Iraqi National Accord, a former exile group that includes former Baath Party military and intelligence officials.

"Badran and Ayad Allawi, leader of the INA, are spending much of this week at CIA headquarters in Langley to work out the details of the new program. Both men have worked closely with the CIA over the past decade in unsuccessful efforts to incite coups against Saddam Hussein." (The Web link to the full story is broken but it can be found on Nexis.)

So Allawi was at the CIA during the week before Coughlin got that wonderful scoop. That may not be proof of anything, either, but a picture is beginning to form.

That picture becomes sharper in the months that followed Allawi's release of the Habbush forgery, when he suddenly returned to favor in Baghdad and eclipsed Chalabi, at least for a while. Five months later, in May 2004, the Iraqi Governing Council elected Allawi as his country's interim prime minister, reportedly under pressure from the American authorities. Combining subservience to the occupiers with iron-fisted tactics, he quickly squandered any popularity he might have enjoyed, and his INA party placed a humiliating third in the 2005 national elections.

That was the end of Allawi as a politician, yet perhaps he had already served his purpose. And it might be very interesting to hear what he would say today about the Habbush forgery -- and his broader relationship to the CIA and the Bush White House -- especially if he were to tell his story in a congressional hearing.

Until then there is much more to learn from Suskind's reporting, including new evidence that Bush and other officials knew there were no WMD in Iraq. Read an excerpt from "The Way of the World" here (where you can also sign up to receive a copy for $1 from Progressive Book Club, which happens to be run by my wife, Elizabeth Wagley).