What you need to see, read, do this week: Tiger attacks, young Arab Brooklynites and a couple of guys named Corey. 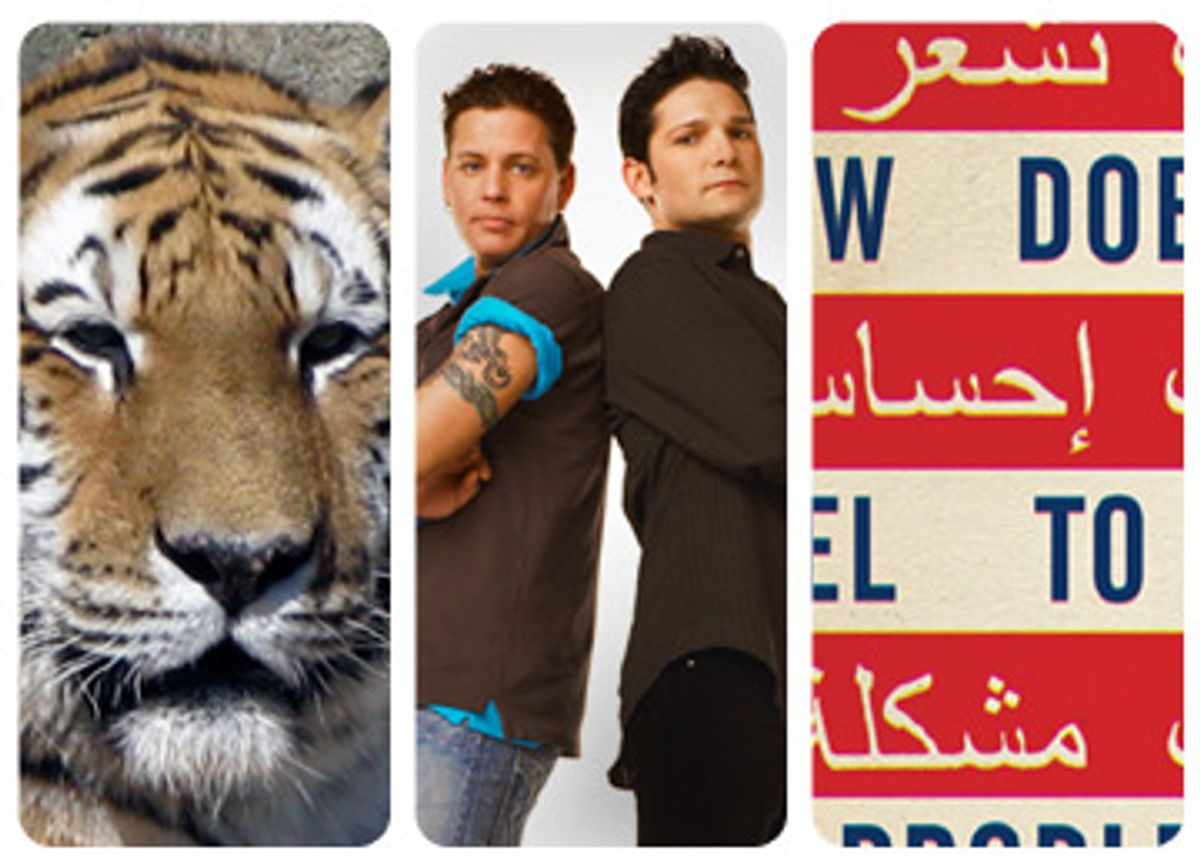 "Explorer: Zoo Tiger Escape" on the National Geographic Channel
You can keep your "Shark Week." For pure chills and fever, give me a tiger: purring, subtly massive. And -- oh, yeah -- treacherous. Never more so than on Christmas Day 2007, when a 243-pound tigress named Tatiana burst the confines of her San Francisco Zoo enclosure and mauled three young men, killing one. The bizarre assault is re-created in National Geographic Channel's "Explorer: Zoo Tiger Escape," premiering Sunday at 10 p.m. EDT. It's the rare wildlife doc that plays like a true-crime show. How did Tatiana get past a moat and a wall that had held generations of tigers before her? How did she become the first escaped animal from a U.S. accredited zoo to claim a human life? And how can zookeepers keep it from happening again? A particularly urgent question, given that more tigers now live in captivity than in the wild. -- Louis Bayard

Moustafa Bayoumi's "How Does It Feel to Be a Problem?"
True or False: Muslims are responsible for 9/11. If you answered "True" rather than "False! It was extremist al-Qaida operatives of Saudi origin!" then Moustafa Bayoumi's "How Does It Feel to Be a Problem? Being Young and Arab in America" ought to rise to the top of your reading list. As a way of helping to clarify, for a non-Arab audience, the difference between Muslims and terrorists, Bayoumi, an English professor at Brooklyn College, etches seven profiles -- "portraits," he calls them, to avoid negative connotations -- of young Arab Brooklynites going through the stress, pain and, frequently, irony of becoming "the new blacks," as one interviewee put it. Sami joined the U.S. Marines in early 2001 and did two mind-fuck tours in Iraq. Yasmin, a devout Muslim, fought her high school for the right to hold office in student government without having to go to dances. Omar interned at Al-Jazeera and can't get a media job; he suspects the Western media has blacklisted him. Rasha and her family spent several months as detainees, held without charges. Politics aside, these are great stories about people who might be your neighbors, and Bayoumi delivers them with urgency, compassion, wryness and hints of poetry. You may walk away from the book with a much greater understanding of Arab-American life, but you'll feel that's simply because you've hung out with Bayoumi and friends, snarfing down Dunkin' Donuts or puffing on hookahs, talking about vital issues. -- James Hannaham

"The Two Coreys" on A&E
A cautionary tale for fame-obsessed teenagers everywhere, "The Two Coreys" (10 p.m. Sundays on A&E) explores the tragic love story of Corey Haim and Corey Feldman, former child actors who've been best frenemies since they starred together in "Lost Boys." After suffering through some dark times (both report that they were molested when they were 14 years old by different, unidentified individuals) and careers in decline, the Coreys have struggled over the years. Despite his unnervingly insecure appearance on "The Surreal Life" a few years back, Feldman now appears to be happily married and productive, while Haim continues to battle addiction and loneliness. Whether they're in couples therapy together or on the set of their "Lost Boys" remake, the accusations, tears, insults, betrayals and dark nights of the soul that were filmed for this show's second season absolutely defy description. Suffice it to say that "The Two Coreys" is a glorious train wreck of ego and lost fame, awful and stupid and funny all at once. The fact that these two take themselves very, very seriously just makes the whole thing all the more tragic. -- Heather Havrilesky

"Sparrow," Original Motion Picture Soundtrack CD
"Sparrow," Johnny To's gorgeous pickpocket movie (and homage to old Hong Kong), hasn't yet been released in the United States. But by using a little ingenuity (and being somewhat fearless about the dismal dollar-to-euro conversion), you can at least have the music: Xavier Jamaux and Fred Avril have composed one of the most stunning movie scores I've heard in years, one that blends Latin and cool jazz with billowy orchestral washes of sound, with a little "Young Girls of Rochefort" tossed in. Jamaux and Avril never let us forget we're in Hong Kong, though: In the album's liner notes, To is quoted as saying that he wanted the "'exotic oriental' sound that was popular in Western movie soundtracks in the 50s to accompany Asian settings or characters," and it sounds as if Jamaux and Avril, with this sophisticated and beautifully crafted score, followed his instructions to the letter. The soundtrack is currently available from Amazon France, which is easy to use, even if you don't know French. We can't let the French have all the good stuff, can we? -- Stephanie Zacharek

"Barchester Towers" and "Framley Parsonage" by Anthony Trollope, read by Simon Vance
If you're budget-strapped yet unwilling to settle for a "staycation" this summer, then you, like me, have probably been spending a lot of time on buses. My fail-proof method for turning the ordeal into a respite is to load up my iPod with Trollope's long, deliciously engrossing comic novels of life and gossip in a 19th century English cathedral town. Though the stakes in the high-church/low-church scuffles are now irrelevant, the quarrels, romances, intrigues, ambitions and follies of Trollope's characters never get old, and his witty, ironic, blithely intrusive voice is a treat for anyone weary of dodgy first-person and "free indirect" narration. Nobody does it better than Simon Vance, either. (The audiobooks, from Blackstone Audio, are more affordable with an Audible.com membership, which gives you a credit good for one book in exchange for each modest monthly subscription fee.) -- Laura Miller

"Girl on the Bridge" on DVD
Paramount Pictures recently shoveled out a pile of films never previously available on Region 1 DVD, and as is customary with such budget editions, the transfers are mediocre and the special features nonexistent. As is also customary, there are treasures and oddities galore amid the slush -- the wife-swapping dramedy "Serial," with Martin Mull and Tuesday Weld! Shirley MacLaine as a tormented Brooklyn gentrifier in "Desperate Characters"! But I'm most surprised, and delighted, to see "Girl on the Bridge," a strange, seductive black-and-white film made in 1999 by French director Patrice Leconte. A self-conscious imitation of prewar French cinema by the likes of Marcel Carné or Jean Vigo, it stars Vanessa Paradis as the eponymous would-be suicide, rescued from her perch above the Seine by a carnival knife thrower (the great Daniel Auteuil). Of course he falls in love with her, but will he tell her before it's too late? -- Andrew O'Hehir