An opening that keeps the door shut

Filmmaker Zhang Yimou's minimalist update on the mass rallies of old fails to illuminate the modern society China is trying to build. 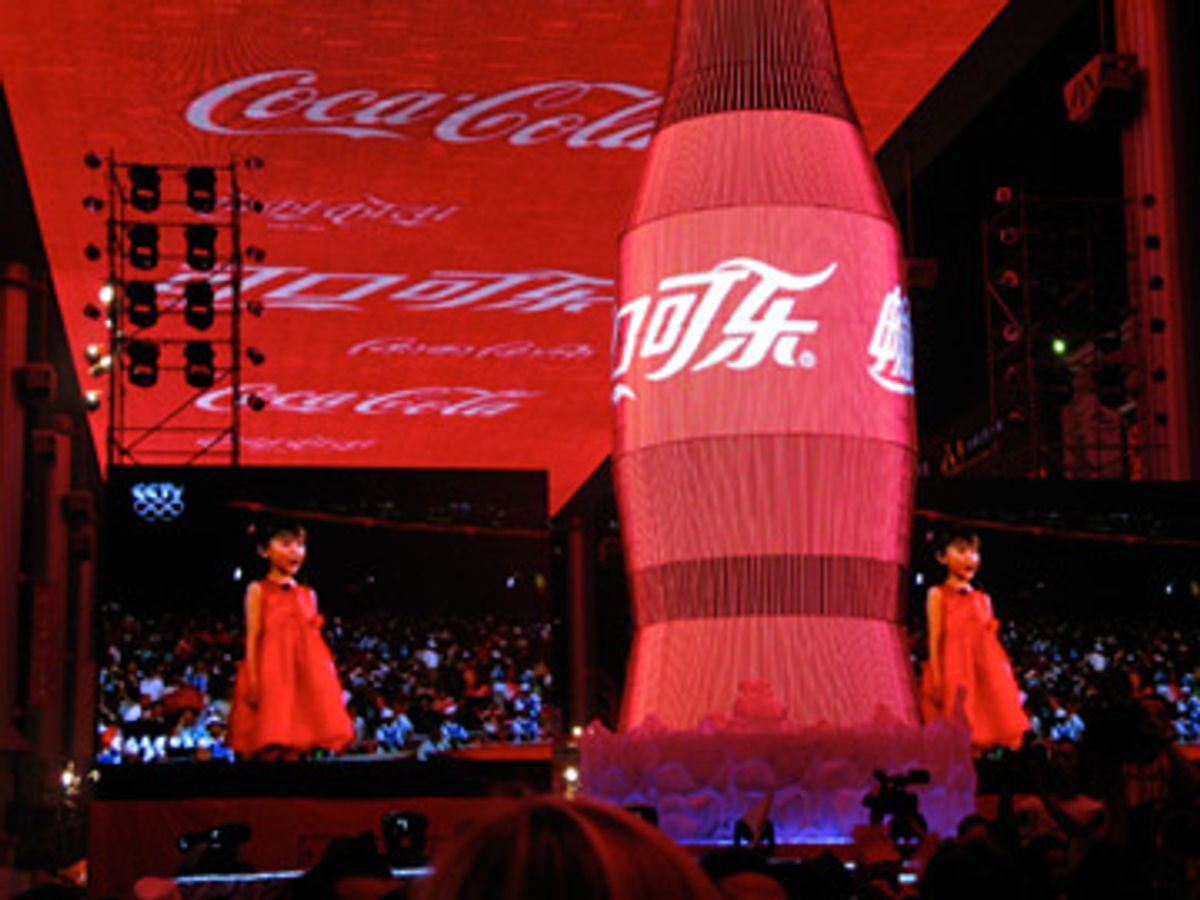 One of many illuminated Coke bottles at a celebration at an upscale mall in Beijing during Friday's opening ceremonies. Onscreen, Lin Miaoke sings "Ode to the Motherland."

I wish I could tell you that I experienced China's greatest (staged) moment in history amid peasants and workers gazing with teary-eyed awe toward their unlimited future. Instead, I hustled a precious in-crowd invite from Coca-Cola P.R. reps for standing space (past metal detectors) in the outdoor pavilion at the Place, an upscale mall amid the instant mini-Manhattan of Beijing's central business district.

The draw here was the world's largest LCD screen, running along the high outdoor ceiling for half a block. The night's spectacle might have been more spectacular had images of the opening ceremonies somehow been stretched along this overhead stream. Instead, the Coke logo, in Chinese, undulated all night, while more ordinary public screens provided the telecast, which the crowds of Armani-clad kids could glimpse through the giant flags they'd been provided to wave and the numerous illuminated Coke bottles taller than 20 Yao Mings.

True, the flags around town, hung from motorcycles and shop fronts or stuck in the collars of many people's shirts, have been the Chinese one, not the Olympic. But if there was any rabid nationalism in evidence here, it was mostly for benefit of the camera crews. Given the years of continuous media bombardment, workplace pressure and unadulterated indoctrination leading up to this moment -- hype would be far too mild a word -- I didn't see any overdue excitement.

The national anthem evoked tears, there were appropriate amounts of oohing and aahing at film director Zhang Yimou's hiply minimalist update of the mass revolutionary rallies of old. As the delegations of the world trudged in, proving once more just how many obscure places there still are, the biggest cheers were reserved for a country that people here don't call a country: the compatriots from "Chinese Taipei," aka Taiwan, are likely to get the warmest welcome of all in Beijing, as mainlanders do all they can to underline the point that all Chinese are sure to be united in name as well as commerce shortly, like it or no.

Sinologists could, and undoubtedly will, pen full volumes about the symbolism of the ceremony itself. Predictably, Zhang Yimou, a former rebel whose early films showed the harsh life of peasants and the cruelties of the Communist epoch (see the amazing "To Live") became a darling of state control and big money for his triumphal historical epics, went back to the safe territory of ancient Chinese "civilization."

This is the very same civilization that waves of movements have attempted to destroy through the 20th century and that many Chinese intellectuals argue has lost all meaning and relevance. But for impressing the world, what better than a 101 crash course on Chinese ingenuity, including the creation of paper, writing, calligraphy, Zen-like philosophy, kung fu and tai chi?

Thank God there wasn't a tableau about acupuncture, requiring 10,000 dancing needles. With all its up-to-date multimedia effects, the event fit right into the age-old Chinese strategy of intimidating foreigners far more than "welcoming" them. (In cutaways to George Bush and Vladimir Putin, caught peering up at fireworks in unguarded moments, the looks on their faces seemed to say, "We better just give up and get out of the way.")

Mass events like this veer to the kitschy or the fascist, and, in his need to remain artistically pure, Zhang favored the latter. To Chinese eyes, the loud drumbeats and precise martial formations betokened unity and solidarity, but I'd imagine that for people in Iowa with no familiarity of China, the predominantly male and militarist feel ( a single Janet Jackson moment would have gone a long way) surely reinforced old suspicions and fears of a "yellow peril." Some moments, with goose-stepping flag bearers, were downright frightening.

And there was little or nothing that touched on the modern society China is trying to build. The chronology conveniently skipped from the late Tang dynasty to an astronaut (presumed Chinese, since he never removed his helmet), leaving out centuries of decadence, famine, civil war, peasant revolts, Japanese annihilation, communism. No echo of the Cultural Revolution's big rallies here.

And, while the torch lighting run around the stadium façade was mind-blowing, the bearer himself was no surprise: Li Ning isn't just one of China's first gold medalists but also one of its richest entrepreneurs through his shoe and sporting goods company, a man who runs a foundation to support retired athletes and has strong connections to the current power structure.

For a student friend who was selected to participate in the "national minorities" segment, the biggest challenge was being sequestered for nearly three weeks in a military-run hotel under somewhat gulaglike conditions. Like many of the other 20,000 participants, he had to contend with heavy costumes that overheated on the muggy summer night, plus exits on the quick trot to let others pass before being trampled. Many performers, he reported, had to swear off bad habits and rehearse for over three months -- all for the unpaid glory of the motherland.

At a press conference afterward, Zhang Yimou looked a contented man as he basked in the praise of Chinese reporters and fielded bland, noncontroversial questions that are the staple of any impersonation of a free press: "What would have happened if it rained? How did you choose the little girl from the earthquake zone?" I might have liked to know how many conflicts over content there were between government minders and the creators.

After melting in the heat myself through the march of nations, the only moment of genuine goodwill before the cutthroat medal scramble begins, I headed off to Sanlitun.

Once upon a time, this first strip of homemade beer bars was an enclave of new freedoms in a prudish city kowtowing to officialdom: all the things Chairman Mao warned you against in one street. There were raucous rock bands, leggy girls on fashion runways, dope dealers and roving peddlers of pirate DVDs, plus the world's dowdiest madams offering men trips to nearby "lady bars." Now, I was shocked to find the area totally seedy, a still slightly red red-light district built on the tangible absence of any direct pleasure, where sullen hostesses and various criminal types catered to hordes of drunken Western frat boys turned fortune hunters. I didn't stay long enough to even see the torch lit.

As in most of the "reformist" appendages to old Beijing, there's more empty imitation in Sanlitun than anything else. In the opening ceremonies, we saw something purely Chinese -- but equally unrelated to the kind of contribution the country really could make to humankind's future.

That, of course, is what gives these games their suspense. For Chinese, this is a moment their country pulls alongside other developing nations. But the rest of the world is already looking for hints of how China's coming domination might look any different from the previous American century. The opening ceremonies magnificently and profoundly slammed the door shut on such inquiries. When it comes to a Chinese version of modernity, nobody is filling in the blanks yet.