What to make of the Edwards fiasco? 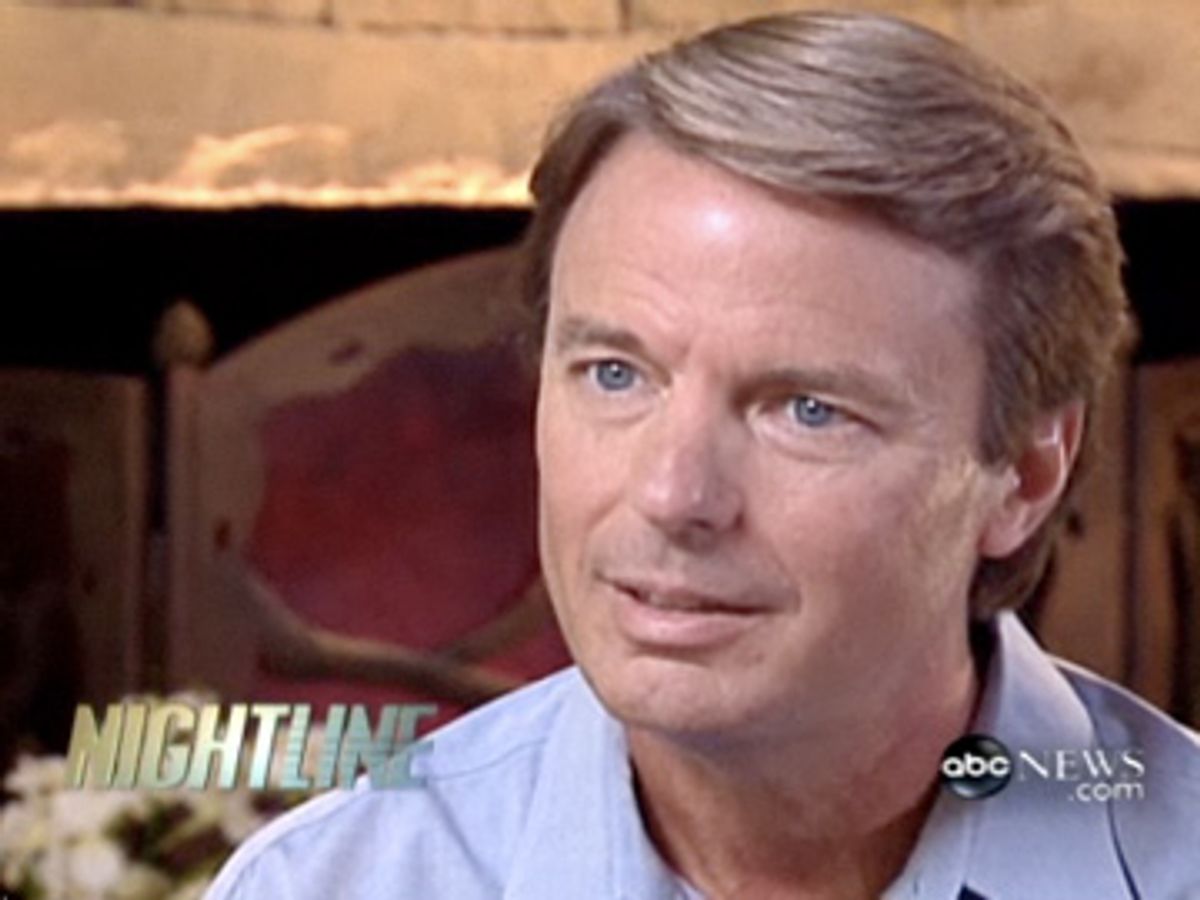 American politics loses its innocence, chapter a billion: John Edwards has been caught cheating on his wife, Elizabeth Edwards. "I started to believe that I was special and became increasingly egocentric and narcissistic," he said in a statement issued Friday, also saying that he admitted the affair to his wife in 2006. "If you want to beat me up -- feel free. You cannot beat me up more than I have already beaten up myself."

The one-time Democratic presidential candidate appeared in a much-touted interview on "Nightline" Friday night. "I've been in love with one woman for 31 years," he said. "She is the finest woman I have ever known." He once again denied the allegations that he fathered a child with Rielle Hunter (bizarrely and tantalizingly, Edwards aide Andrew Young is alleged to be the father. Please to explain -- someone!!). And he offered an explanation for why he gave this interview without Elizabeth: "I asked her not to be here. I asked to be the man and take responsibility." Whatever you think of John Edwards and this imbroglio, you could not accuse him of mincing words about this affair: "I was wrong," he said. "And I am responsible."

Below, Broadsheet contributors respond to the Edwards fiasco. -- S.H.

Sarah Hepola: I believed deeply in the Elizabeth-John love story, even as I distrusted Edwards as a politician (shifty trial lawyer that he seemed to be). When the Enquirer story broke, I shot back at others' knee-jerk judgments, choosing to believe that a couple staring down a bleak future, wrestling with a grim prognosis (a couple who knows the agony of losing a son, no less), might make an unconventional sexual arrangement. And yet, what strikes me about today's revelation is how conventional it seems to be: just another hotel bump-and-grind, another thirsty ego desperate to be slaked. The ugliest part for me is Edwards' defensive claim that it all happened while Elizabeth's cancer was in remission.

Honestly, having watched the "Nightline" segment, I feel nothing but sadness -- for everyone, including me, for having watched it so salaciously. Yuck.

Tracy Clark-Flory: This is an interesting illustration -- one of many, recently -- of just how much people are willing to risk for sex. (I can't allow my mind to fully go here, but: What if Edwards had become the Democratic presidential nominee, and then this came out?) Also fascinating are the headlines announcing that he didn't love his mistress and that the affair started after his wife's cancer was in remission. This makes us feel better about the whole thing?

Kate Harding: I can't say I'm shocked or outraged, because I expect pretty much nothing of politicians, even the ones I like. So basically, I'm hung up on two things: 1) As Tracy said, we're supposed to feel better because he didn't love her? That just makes me think he's even more of a jerk. 2) When the National Enquirer is the media outlet with the real scoop on politicians' lies, we might just be in trouble.

Mary Elizabeth Williams: Maybe as someone who's been married and had kids and truly believes Elizabeth Edwards is the bomb, I should be all outraged that John Edwards has admitted an affair. But I'm outraged at the outrage.

We are one screwed-up, sanctimonious society, with more tools to rip into every shred of an individual's privacy than we know what to do with. I wouldn't want to be the dude's wife, but hey, I'm not. When we start blurring the distinctions between a person's life and his work, we can rule out FDR or JFK or Clinton (who is looking better and better, isn't he?). You don't stop being human and flawed and vulnerable because you go into public life.

The two wars we're currently waging are what's immoral. The way that Wall Street and the banking industry peddled an unsustainable mortgage system to the American people is unethical. The No Child Left Behind Act is unconscionable. Where John Edwards puts his penis is low, low low on my list of wrongs I can feel "disappointed" about.

Joan Walsh: If John Edwards' "Nightline" interview with Bob Woodruff was intended to begin his political rehabilitation, I don't see it. I saw a rattled trial lawyer pleading for sympathy, very badly. It was unbearable, from the opening "Can I say first, thank you, Bob, for coming?" to his sign-off: "One of the purposes of having this interview with you, Bob, was to tell the truth." All of us make mistakes, but Edwards' decision to sit for this nationally televised interview was hugely poor judgment, narcissism colliding with a sad self-destructive streak and zero self-awareness. All those fake smiles and facial twitches were hard to watch.

Pleading his case to Woodruff backfired; he must have expected empathy from the Iraq war survivor, but Woodruff's wounded countenance was a silent rebuke to Edwards throughout the interview. The ABC reporter spoke for the nation when he asked: "How could you have done this?" And Edwards embarrassed himself by noting that his wife Elizabeth "was in remission from cancer" when he had the affair in 2006. Am I an ass to note she was diagnosed at the end of 2004? Why did he bother telling us the affair was before her cancer recurred in early 2007? Why did he add: "I know how widely admired Elizabeth is. I'm fully aware of that."

The lowest point came when he said of Rielle Hunter's child: "I don't know who that baby is." It's possible the National Enquirer got other details of the affair right but the baby's paternity wrong, but Edwards' dismissal seemed cold and tin-eared. Like most other political problems, Edwards' crime -- sexually straying with a campaign operative -- wasn't his worst offense; he shamed himself with his coverups: first the lies, and then this attempt at rehabilitation.