NBC can't keep getting away with delaying the events we want to see for 12 to 15 hours. 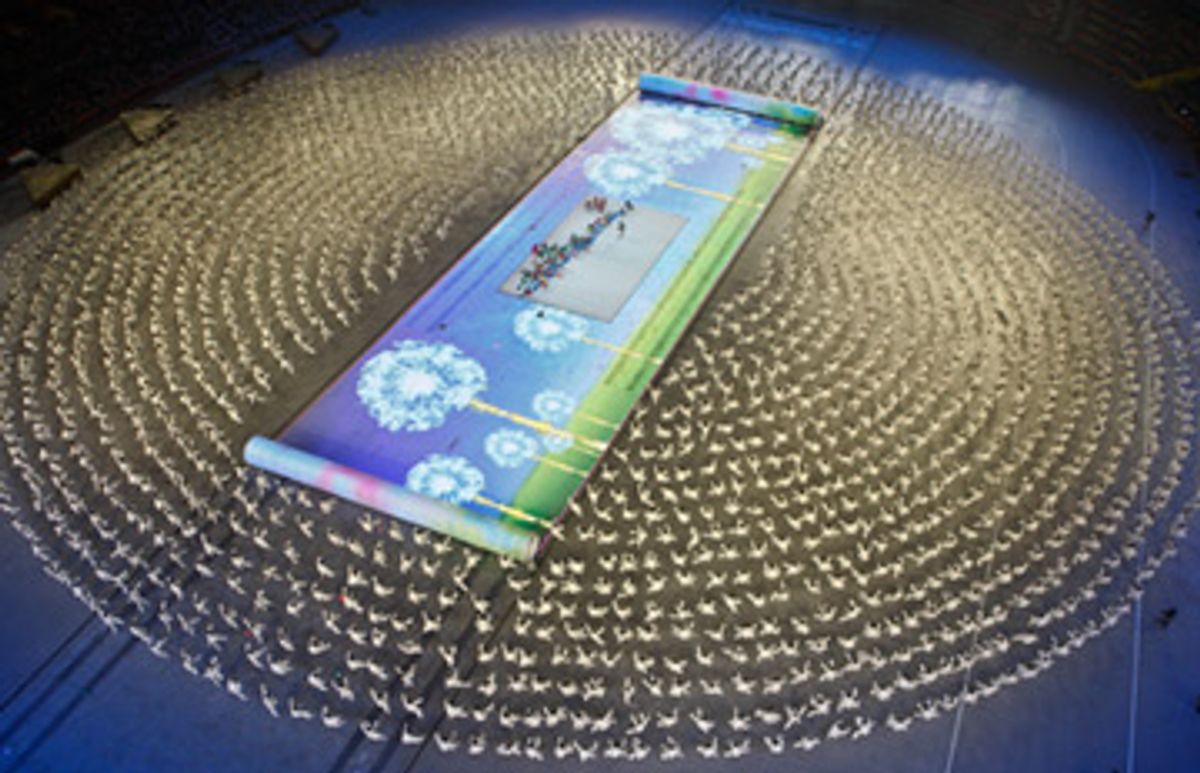 Tai chi practitioners in the opening ceremony of the Beijing 2008 Olympic Games, Aug. 8.

NBC started the Olympic opening ceremonies at 8:03 p.m. Friday, five minutes before their famously numerological real starting time, 8:08. That means the tape delay was only 14 hours and 55 minutes on the West Coast, not 15 hours. The dazzling currentness of it all made me light-headed.

I would be lying if I said I'd been bursting with anticipation for the opening ceremonies all day Friday. I generally find the so-called artistic portion of these things laughable at best, stultifying at worst, and Beijing's cavalcade of precision skewed to the latter.

One guy banging on a drum or doing tai chi: not that interesting. Two thousand eight of them doing it in unison? Just me, I know, but: same.

The looks on the faces of the athletes as they enter the stadium in the Parade of Nations, the joy and playfulness and awe and giddy relief, are far more moving, speak far more eloquently to the human condition, not to mention the sporting one, than all the glorified drill teams in China and all their magical LED screens combined.

But I did want to see them. They're a tradition, a part of the deal, one of the ways each Olympics gets connected to the last one and the one before that. When I got out of bed at 5:17 a.m. Friday my first thought was -- changing sheets. Minor kid mishap is what had gotten me up at that hour. But my next thought was that the opening ceremonies were under way and I wouldn't have minded having a look.

I worked quickly, imagining, in the spirit of all Olympic opening ceremonies, where everything symbolizes something, that the changing of the sheets symbolized, uh, change.

Then I fired up the laptop and looked around. I knew I wouldn't get too far. NBC holds exclusive rights to the Olympics in the United States, and the opening ceremonies are a big show. They're reserved for prime time, 12 hours after the fact in the Eastern time zone, 15 hours out West, an eternity in the digital age.

There are various ways to get around the blackout and watch Olympic programming from other countries, and people smarter than I, mostly with PCs, not Macs, are at this moment enjoying them.

I kept running into vaguely criminal-looking sites with hucksterish come-ons: Watch TV on your PC! From all over the world! Come watch! Free! You like Britney CDs? We have DVDs. Watches! Come here, buddy. Fur coat for your lady friend?

Ah, the heck with it. By late afternoon I'd seen news reports, read about the big night. I knew all about the bamboo scrolls giving way to the paper, symbolizing the way that bamboo scrolls, uh, gave way to, you know, paper. It seemed that if I only could have caught a glimpse, I'd have had the chance to relive Chinese history in real time. Instead I'd just have to wait till prime time.

In Beijing they were stirring, ready to start the first full day of competition. The rest of the world had moved on from the opening ceremonies. I think that 9-year-old who marched with Yao Ming had enrolled in college already. And we here in the United States, not exactly a cultural or technological backwater, were still hours away from gaining access.

Outrageous. This is 2008. We the people have been sending a message to the lords of the entertainment realm for at least a decade: We want what we want, when we want it, the way we want it.

Front after front has been opened in this war as the entertainment industry pushes back: No, we want you to take what we give you, when we want to give it to you, the way we want to.

There might be a few bucks in it short term, but there's not much future in trying to make money off people by making them do what they don't want to do. The future is in figuring out how to make money by giving people what they want. When file-sharing threatened the music industry, which response worked better, the record industry suing its fans or Apple inventing iTunes?

NBC is living in the 20th century with its "watch the big network" approach. Sure, the Peacock's giving us all the badminton and equestrian and fencing we can swallow live in the wee hours on the hench networks. It's fabulous.

But it's holding back the most popular sports, showing them live only when it's convenient for NBC -- when Michael Phelps swims his U.S.-negotiated morning races, for example, which will be live on the prime-time show. NBC's not interested in what you or I think want or think is convenient.

My first prediction for the 2012 London Olympics is that, looking back, this approach is going to seem ridiculous. I mean to NBC. It already seems ridiculous to the rest of us.