In their different ways, the Olympic events on the dazzling first full day in Beijing showcased the ultimate athletic feat: Overcoming fear. 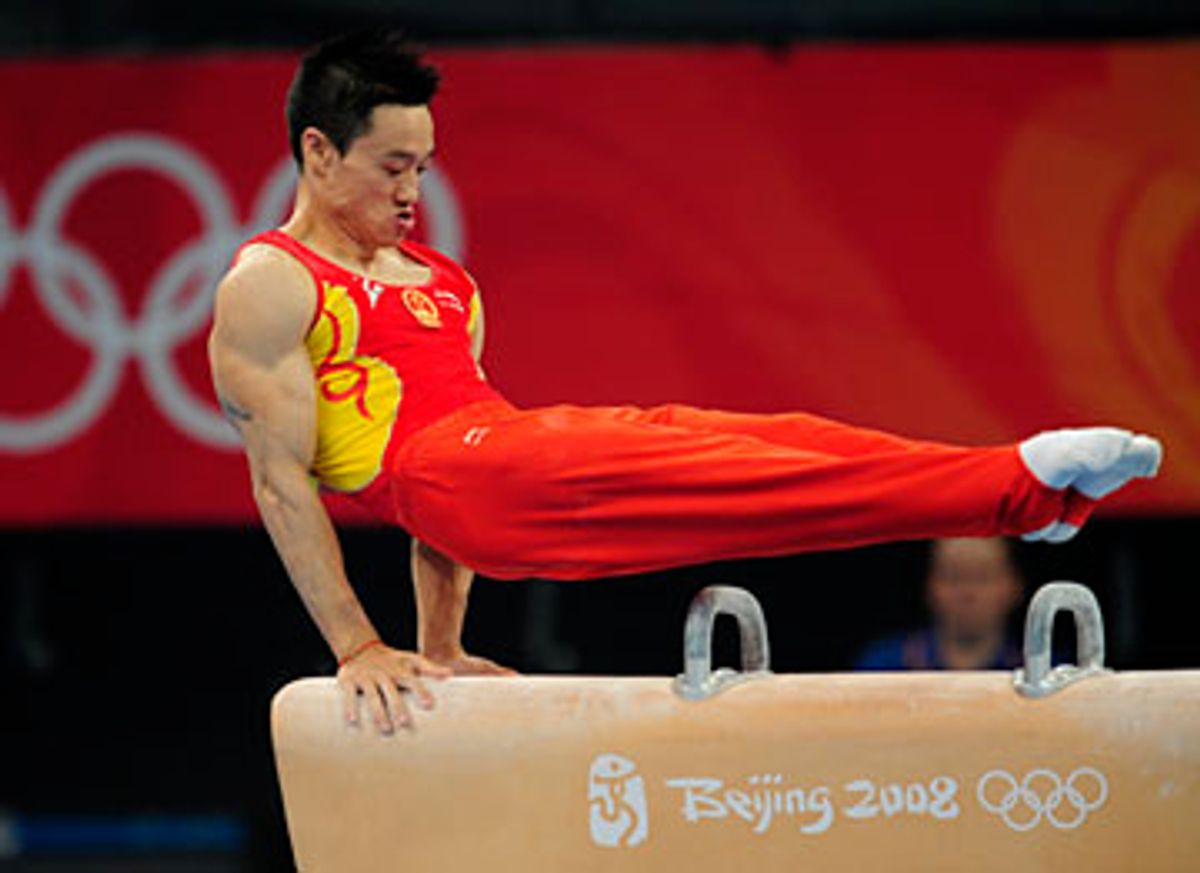 In an attempt to set the world record for nonstop Olympics viewership, I arose at 12:30 a.m. PDT from my overheated TV, which I had turned on about 14 and a half hours before that and which I'd abandoned briefly only to go for a humiliatingly feeble cardiovascular foray. I highly recommend the experience of watching every second of NBC's TV coverage in a single day to anyone who has tried all other mind-altering substances and can get off only by guzzling a huge cocktail composed of the following ingredients:

An unwatchably fast sport whose history involves dueling scars. A superhuman feat of two-wheeled endurance. A lovable, wild-haired Latvian volleyball player and his partner pulling off a world-class upset against an American team featuring a guy who bears a distinct resemblance to Goliath. Treacly human interest features that make you gag. Heartbreaking errors followed by heart-stopping comebacks. An Aussie swimmer with beautiful brown eyes obliterating a world record. Treacly human interest features that make you cry. A 41-year-old mom kicking serious ass on the anchor leg. A boyish legend who successfully started his quest to stake a claim as the greatest Olympian ever. George W. Bush seeming almost, God help me, likable as he clowned around with athletes. Henry Kissinger looking scary. Two ferocious American women in bikinis. And the four best male gymnasts in the world facing down demons as big as China itself.

And that was only Day One of the 2008 Olympics. It was big fun, but I'm worried that I may have overstimulated myself. If I keep up this pace, the only sport I will be capable of responding to by Day 17 is the ancient Mayan Wall Game, in which the losing team is put to death.

Just about every form of human athleticism was on display Saturday -- speed, endurance, coordination, strength, strategy, guile. You already know the headline news: Michael Phelps won his first gold in his quest for eight; the ageless, absurdly ripped Dara Torres saved a silver for the U.S. women; and the Chinese men gymnasts showed why they are the best in the world. But after watching the saber finals, the 150-mile road bike race, the best men's and women's beach volleyball duos in the world, the best swimmer of all time, the oldest world-class swimmer of all time, and a whole bunch of guys in tank tops with talcum powder on their hands who seem to have been born with exoskeletons, the one quality that sticks in my mind is concentration.

All athletes, at any level, must learn how to concentrate, to block out all thoughts that interfere with the task at hand, to overcome fear. And one of the enduring mysteries of sports is why some are able to concentrate better than others. For some, it seems effortless -- which raises the question of whether for them "concentration" is even the right word. Maybe you should call it enlightened relaxation. I think of 49er quarterback Joe Montana, his team trailing in the Super Bowl, 92 yards away with three minutes and change on the clock, pointing into the stands and telling his teammates with a smile, "Look! There's John Candy." But for others, concentration isn't so easy. It involves extreme discipline and a rare self-mastery. Just as it's said that the bravest soldiers are the ones who face down their fear, so perhaps the most courageous athletes are those who have the worst nerves -- but who overcome them.

But those aren't the only forms of concentration. What watching the Olympics teaches you is that there are as many ways to concentrate as there are athletes. And the exhilarated exhaustion you feel after watching an entire day of the Olympics is mostly due to being privileged to witness, in extreme closeup, the faces of men and women facing incredible pressure. And then being allowed to see how they handle that pressure. Yes, some of them crack under the strain. But what's heart-quickening, and sometimes incomprehensible, is how well most of them handle it.

Almost every event I watched, in its own way, revealed the different ways humans deal with unbearable pressure. Michael Phelps, the child in a superman's body whose mom said that he held his first gold medal out to her and said, "Look what I did," listened to music, retreating into a little cave where nothing except his years of training could get in. The Latvian volleyball player Aleksandrs Samoilovs, who with his partner Martins Plavins staged a monumental upset of the top-ranked American team of Todd Rodgers and the aforementioned Goliath, Phil Dalhausser, seemed about as fazed by playing the world champs as a pirate is by a citation from the yachting police. The top women's beach volleyball team, Misty May-Treanor and Kerri Walsh, simply exuded mastery, the kind that comes from years of dominance.

But the most intense moments were during the qualifying round of men's gymnastics. Gymnastics, of course, challenges not just the muscles but the nerves -- of all the major sports, perhaps only ice skating can rival it for sheer mind-warping, I'm-all-alone pressure. Two moments in particular stood out for me. The first was the pommel horse routine of U.S. gymnast Sasha Artemev. Artemev hadn't even known he was going to be on the team until Thursday night, when he was chosen after injured Morgan Hamm had to withdraw. He is unquestionably talented -- in fact, he's the 2006 national champion -- but has a reputation for inconsistency and had botched three of four routines at the Olympic trials. One of NBC's commentators was incredulous that the U.S. coach had chosen to send him out first: "He hasn't even been in the building yet, never mind on this equipment."

Artemev looked horrible. He had huge black rings under his eyes, which seemed to be staring blankly at a gallery of hideous Hieronymus Bosch paintings only he could see. He looked gaunt and haggard, if a superbly muscled athlete can look gaunt and haggard. And sure enough, on his first apparatus, that medieval torture instrument called the rings, Artemev made a huge mistake, bending his legs in the middle of his routine. He lost two full points and received a wretched 13.675. When he dismounted, he looked less like a world-class gymnast than a spectral character from one of Edward Gorey's more depressing tales.

And then, a few minutes later, Artemev approached the pommel horse. It was his best apparatus, but TV showed a dreadful clip of him falling off the horse in the trials. The horse is this kind of dumb-looking thing, a big brown lump like a turd with handles, the least glamorous of all gymnastics equipment, but it has a way of wrecking routines and giving world-class athletes nightmares for decades.

Artemev swung into his routine. It was standard stuff at first, and then he turned it up. His hand changes became faster, he pulled off a tricky reversal of position, his leg swings became faster and higher, and suddenly he was flying, seemingly unconnected to the horse, his legs flashing gloriously through the air, back and forth, faster and faster, with the breathtaking freedom of a child swinging higher than he ever has before. When he dismounted, the cadaverous Edward Gorey character was gone, replaced by a strong young man who had faced down his nerves in front of the whole world. I don't know if Artemev or the U.S. team will end up winning any medals, but for me, he doesn't have to. He already did.

The second was actually not one moment, but the performance of an entire team. China's male gymnasts are the best in the world. But they are famous for choking in the big events -- something that has happened enough that it has even been given a name, the "China syndrome." And, as NBC has pointed out endlessly, the pressure of performing in front of their countrymen is simply inconceivable. The opening ceremonies, which may have been the biggest spectacle ever put on in human history, kind of raised the bar. To say that national pride is at stake is like saying that the Great Wall is a decent-size fence. We're back to the Mayan Wall Game metaphor again, and if the Chinese stars choked this time, it's not clear that it would just be metaphorical.

So there they were, four young men, bearing the expectations of 1.3 billion of their countrymen while also getting ready to do such excruciatingly difficult physical feats as running at full speed down a runway, jumping onto a vault, propelling themselves high into the air, twisting and flipping several times in perfect control, and then landing without moving a muscle. That was daunting enough, but what was truly scary was the attitude the Chinese gymnasts had about the pressure. Their top gymnast, Yang Wei, said something like, "We use the expectations of the Chinese people to carry us on to greater feats." In other words, we're not going to try to ignore this insane pressure -- we're going to embrace it out of national pride!

The Chinese team walked out onto the floor -- and they just smoked the competition. They imposed their iron will and iron biceps on the rings, and they blasted off the vault like they had fireworks in their shoes and landed with computer-like precision. They were laughably, absurdly good. OK, Yang Wei screwed up on the parallel bars, but it didn't matter. If China keeps performing like this, they'll walk away with the gold. And they'll give the rest of us another great Olympic memory: of four young men who took the hopes of a fifth of the people in the world on their backs and didn't let them down.