A federal bill would ban yapping in-flight -- yet a new survey shows public support for in-air yakking is on the rise. 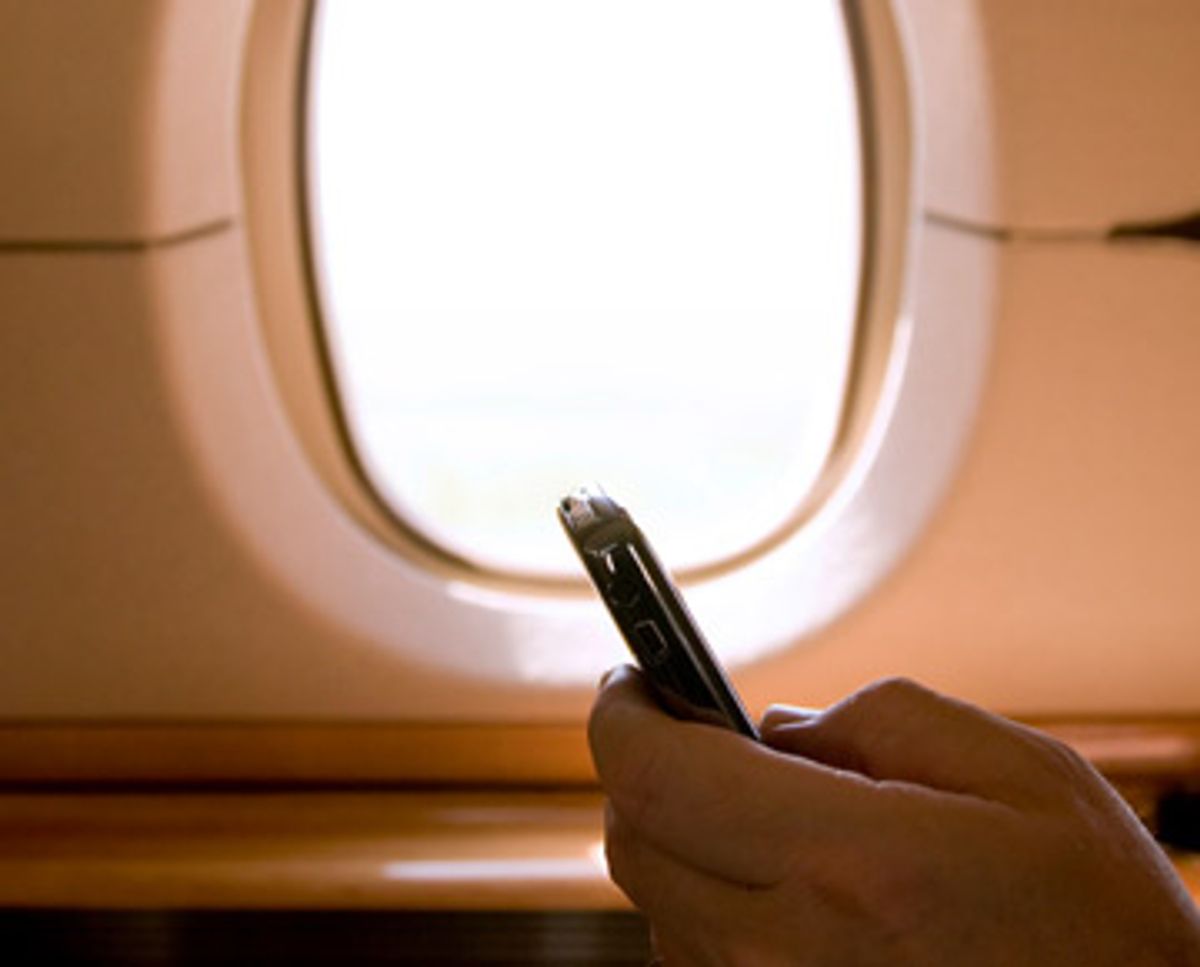 Is the tide turning for in-flight gabbing? At the end of last week, the Department of Transportation reignited the perennial cellphone-on-planes discussion with a survey showing that Americans are surprisingly ambivalent on the question. The data can be carved several ways, but the general take-away is that only about 45 percent of people surveyed thought phones "definitely" or "probably" shouldn't be allowed in-flight. Younger folks, not surprisingly, were more open to the practice.

This comes on the heels of the House Transportation and Infrastructure Committee's approval of Rep. Peter DeFazio's, D-Ore., hilariously titled "Halting Airplane Noise to Give Us Peace Act of 2008," which would -- under the assumption that the FAA will eventually lift its ban on cellphones in flight, as the EU already has -- establish a blanket federal prohibition on "voice communications using a mobile communications device" on board any scheduled flight. The bill is now headed for a full vote in the House. Meanwhile, internationally, Dubai-based Emirates Airlines announced on Thursday that it was moving ahead with fleet-wide plans to allow passengers to use their phones in-flight.

Setting aside for a moment the question of whether cellphone usage on flights is socially intolerable, the Emirates announcement did clear up an issue that always baffled me: Even if people were allowed to use phones on planes, wouldn't their reception cut out at cruising altitude anyway? As the New York Times reported way back in 2001, most digital cellphones have a maximum range of six miles, give or take, so the signal at 35,000 feet would be even crappier (even if cell towers focused their signals directly upward, which they don't) than the remarkable dead zone in my San Francisco apartment. Meaning that calls would still be limited to ascent and decent -- a pretty minimal extension of the current "tarmac exception."

But it seems Emirates and other international airlines are employing on-board gear from U.K.-based company AeroMobile (and a competitor, OnAir), whose technology routes the signal through the plane's communications system:

"AeroMobile comprises an aircraft cabin 'pico cell' system that interfaces with the aircraft's air-to-ground communications systems, typically a satellite-based system. Once transmitted to the ground, signals are sent to AeroMobile's ground system and on to the destination mobile phone and telecoms networks around the world."

Which, of course, is what allows the airlines to charge for the service. Technological barriers overcome, the plane/phone question continues to get people rather fired up. I'll admit to being undecided. Like most, I've had many a pleasant public transit ride ruined -- or unpleasant tarmac wait made that much more unpleasant -- by Willie Loquacious cranking out sales calls next to me. Then again, for those considerate enough to keep things quiet and/or brief, a quick call in a public setting can be an unobtrusive convenience (of course, even many of the inconsiderate no doubt think they're being considerate).

Either way, a federal ban seems like overkill; why not ban monopolization of the armrest while they're at it? As Rep. John Mica, R-Fla., pointed out during recent hearings, "You are trying to legislate courtesy, folks, and that just doesn't work." Emirates Airline spokespeople, at least, claim that "a certain on-board etiquette has developed" in their test runs, "where passengers try to stay quiet to avoid being seen as intrusive." And the Economist reports that 80 percent of Air France customers, after flying with cellphone service, wanted it on all their flights.

Yesterday, a Slashdot poster actually offered up a safety rationale for not banning phones, citing the story of a disabled Irish flight guided safely into the airport using SMS messages. Thankfully, my reading of the Hang Up Act finds no ban on lifesaving texts.

[Incidentally, I'll be sitting in at the Machinist all week, taking over from the eminent Denise Caruso. Regular readers may take it as fair warning that I own neither a Mac nor an iPhone, am poorly versed in the joys of Web 2.0, and have a television soon to be made obsolete by the digital changeover (hey, maybe I can get some advice from you all on that). Let's do this!]

*UPDATE*: Digging into the DOT’s numbers, I discovered that the same survey also highlights the general lack of public confidence in airline safety measures. The number of people expressing "total confidence" in screeners to "keep air travel secure" hovers at 6.4%, while "great deal of confidence" clocks in at 17% and "moderate confidence" at 44.6%. That got me thinking: If I could avoid the inane practices of removing my shoes from my feet and my laptop from my bag, in exchange for tolerating the occasional yakker in the seat next to me, I might take it.

Then I listened to the Congressional Committee’s debate on the issue, in which one Congressperson ominously pointed out that cell phones can in fact TAKE PICTURES AND VIDEO OF THE INSIDE OF THE PLANE, and thus "can be used in a very dangerous way." So it seems like they’ve got all fronts covered on this one.

Evan Ratliff is a contributing editor to Wired magazine, and the co-author of "Safe: The Race to Protect Ourselves in a Newly Dangerous World."