The scrappy American women's gymnasts captured my heart, but I'm rooting for the Chinese -- they need some joy in their lives. 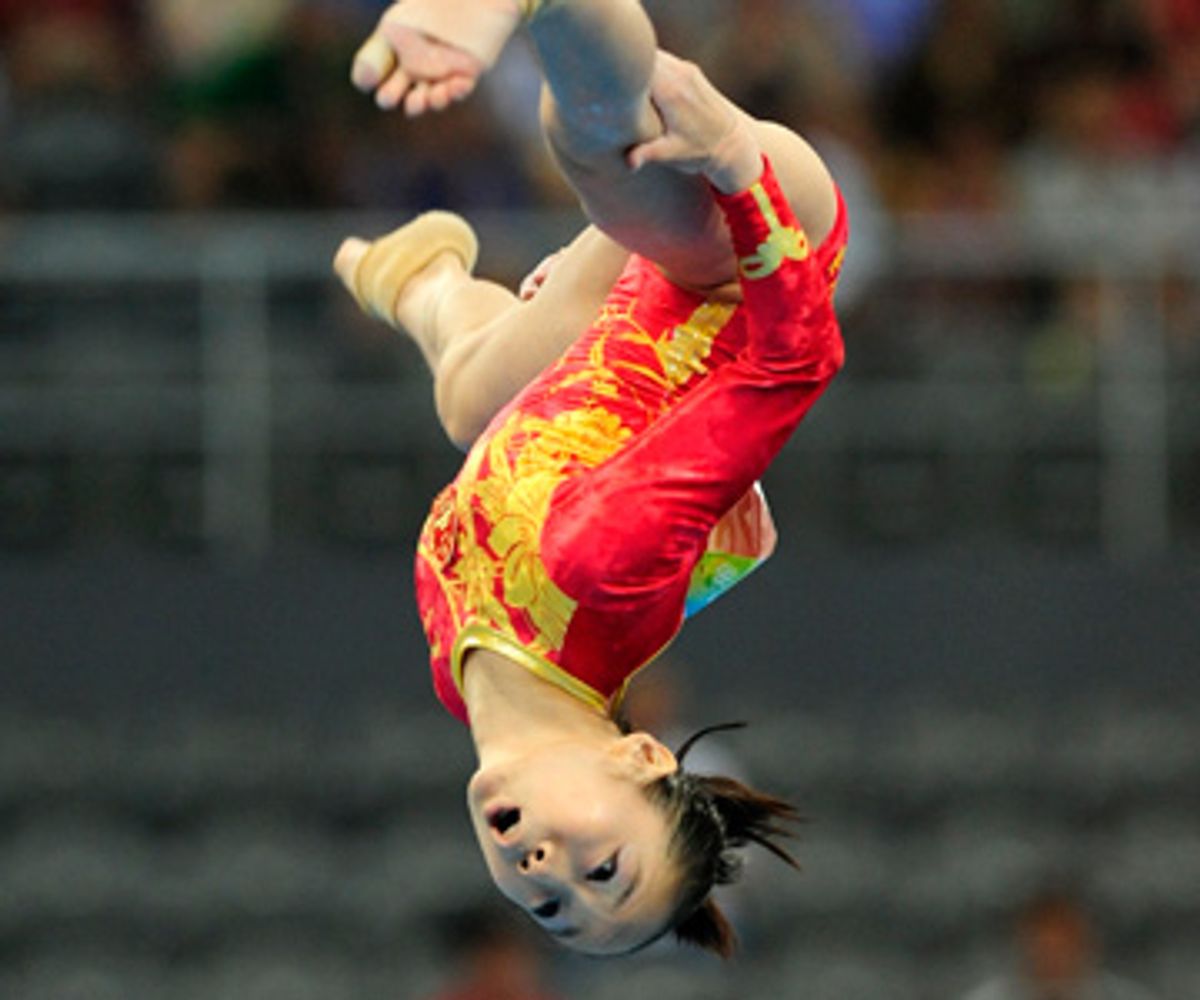 Deng Linlin of China competes on the balance beam Sunday.

Despite having revealed a bit of the darker side of gymnastics in my book, "Chalked Up," I love the sport. While I had some tough times with injuries and emotionally abusive coaches, 22 years later I still long for the moments of transcendence. I'm filled with ambivalence about gymnastics and I really wanted inside that stadium Sunday to watch the ladies of the U.S. blow my mind so that I could live their glory vicariously.

I wanted to see Shawn Johnson do her two-and-a-half twisting Yurchenko on vault. I wanted to hear Liang Chow, her supportive Chinese coach, whisper in her ear, "Perform like a champion. It's OK if you make a mistake," as NBC reports he does. I wanted to believe in the fairy tale of gymnastics again.

I wanted to believe in the charming narrative that drew me to gymnastics in the first place. But I have a full-time job that doesn't involve writing and Salon doesn't have the budget to cover a trip for some random blogger to travel to China. So I watched the preliminary round of the competition on my couch with my husband, who has less patience for this sport than I do. He finds the whole thing kind of creepy. But I got sucked in with the rest of the world and my mind was indeed blown.

I found myself rooting for the Chinese, not out of any anti-American sentiment but rather out of sheer empathy. If these poor girls who show no outward signs of joy must live amid a repressive government sucking in yellow air all day, they should have a few gold medals to ameliorate their circumstances.

These ladies perform with quiet precision, little expressiveness. They are there to win, not enjoy themselves, play to the crowd or land on a Wheaties box. The girls showed hints of emotion here and there. Deng Linlin cracked a near smile after a solid vault, a Yurchenko with a double twist. And He Kexin, who looks to be about 10 years old, wiped tears away from her sparkly eyes after a fall on bars.

She'd nearly completed a routine of unmatched difficulty, nailing four release moves, then slipped during a transitional move. I gasped aloud, wanting so badly for her to satisfy her nation's hopes, to carry that badge with her into life. The team's lead, Cheng Fei, was steady and maternal, hugging the young girls, performing without error on all events.

The Americans are pure strength and resolute vitality. Their outsize springiness explodes with American bravado, but they faced their share of travails in this preliminary round.

Samantha Peszek sprained her ankle during the warm-up and was unable to compete on floor and vault, forcing the U.S. to go with only four women on these events, as veteran Chellsie Memmel was also sidelined with an injured ankle. Four competitors meant all scores counted, no room for error. But there were two major steps out of bounds on floor -- one by relative newcomer Bridget Sloan, another by team captain Alicia Sacramone -- which put these ladies in a tenuous starting position.

Nastia Liukin was all grace and limbs with her ballerina extension in her dance moves and unconventional front tumbling runs. She stuck the blind landing on her double front somersault on floor but never smiled. Then, on her best event, the uneven bars, she fell on her dismount.

Her routine was still good enough, as a result of high difficulty levels and nearly perfect execution before the fall, to qualify her for the finals. But I doubt she'll forget the shame of falling and the look in her father/coach's eyes when she found herself splayed beneath the fiberglass.

Memmel broke my heart when she fell from the bars. The former world champion missed the 2004 Olympics. She stuck it out four more years and qualified for these games, only to have an injured ankle keep her from competing on all but one event. The bars. And then she fell. At 20, she's too old to wait four additional years. That fall will be her sole Olympic memory.

Johnson is bound to be this Olympics' Mary Lou Retton. She is power, joy and sparkle. Oh, to be her. What must that feel like? To be so perfect, so seemingly guileless and filled with buoyancy. She made no mistakes, solidifying her contention for the all-around individual gold medal.

The U.S. netted out the day in second place behind the Chinese by about a point and a half. The slate is wiped clean for team finals, so they have as good a shot at the gold as Sunday's victors. It's sure to be a nail-biter.

When I was 7 years old, Nadia Comaneci captured my imagination in the 1976 Olympics and led me straight to the gym, where I stayed for the next 12 years. Sunday, these girls -- those with quiet grace, those with bubbly dynamism -- won me over as they always do. From my couch in San Francisco, beside my leery husband, wading in my own cynicism about the sport, I was elevated.