Capable Iraqis training for special operations roll over sharp gravel and run in the scorching heat. But they are terrified of the U.S. military's leaving. 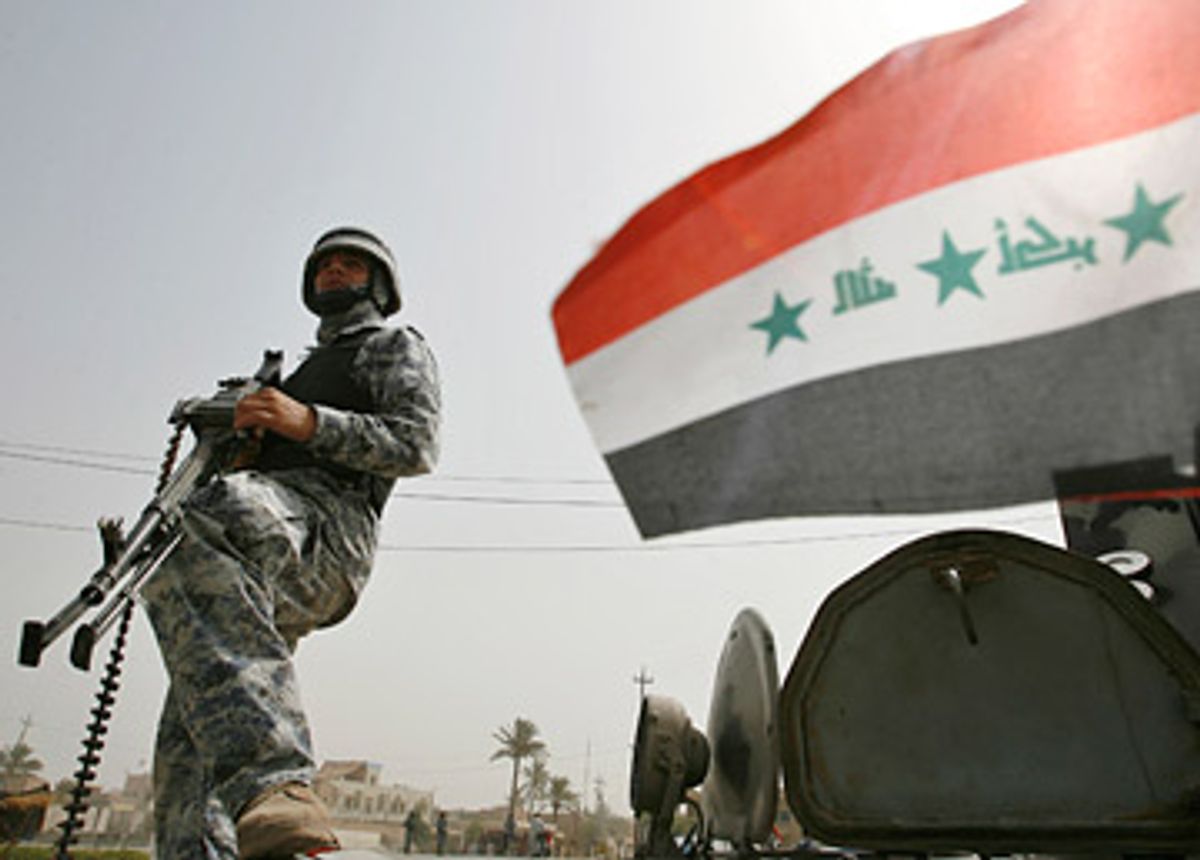 In a few swift movements, an Iraqi policeman hooked his right foot under U.S. Army Capt. Patrick Soule's ankle and pushed the American soldier down to the parched ground. A second later, the policeman had his hands on the American's throat, his knees pushing into Soule's abdomen, until Soule wrestled his legs free, kicked the Iraqi in the shin, flipped him over and grabbed his head in a deadlock.

Around the two men, Americans cheered -- not so much to celebrate the win of their peer as to congratulate the Iraqi for coming so close to victory. The Iraqi is one of 23 members of an elite Baghdad police unit that Soule and his soldiers are training to become one of Iraq's first SWAT teams, which, when the training is complete, will be hunting down suspected sectarian militia members, kidnappers and murderers. The sooner this SWAT unit and other Iraqi security forces are ready to fight the militias and gangs that have devastated this country, as U.S. government and military officials like to say, the sooner American troops can go home.

"As far as their level of professionalism, they're pretty good," said Soule, a member of the 2-4 Infantry Battalion of the 4th Brigade, 10th Mountain Division. When the three-week training program is over at the end of August, Soule said, "they will be ready to operate on their own."

But the Iraqis say the idea of securing Iraq without American assistance remains terrifying to them.

"No!" exclaimed Haidar, a 29-year-old SWAT trainee who has been a police officer since 2004, with an expression of shock on his face. "We are not going to be ready to do it without the Americans!"

The United States has spent four years and more than $20 billion on training and building Iraqi security forces; American instructors say the Iraqis are now mostly able to fight insurgents and sectarian militias on their own. Iraq says it has more than half a million people in its security forces (although the special inspector general for Iraqi reconstruction for the U.S. Defense Department has questioned the numbers, saying that many of those have been wounded, been killed or gone AWOL). They wear uniforms and body armor, move in organized formations, almost always carry their weapons correctly and, for the most part, act professionally during missions.

But despite such a vote of confidence from the Americans, and despite Iraqi Prime Minister Nouri al-Maliki's repeated assurances that Iraq is ready to provide its own security, members of Iraqi security forces say they are still years away from being able to defend their country and its citizens without direct American support.

"We still need American troops to stay here," said Iraqi police Capt. Ali al-Shimeri, the SWAT team commander who observed the training late last week, reiterating a lack of confidence in the force's readiness many other Iraqi officers share. "It would be a big mistake to withdraw the Americans now. American troops ... provide us security."

His sentiment may reflect a sense of discomfort his force -- made up mostly of Shiite Iraqis -- feels in the particular part of Baghdad where al-Shimeri's policemen are stationed: Dora, an almost homogenously Sunni area. A year ago, Dora was a hotbed of Sunni extremists affiliated with al-Qaida. There were vicious fights between Sunni insurgents, Shiite militias and the Iraqi police units affiliated with them, such as the infamous Iraqi police Wolf Brigade, which acted as a Shiite militia in its own right, killing and torturing Sunnis.

That fighting is over, and no major acts of violence have taken place in Dora since last year. But a legacy of those battles is the simmering mistrust of the police force among Dora's residents. "Most of our population trust the police if they are patrolling alongside coalition forces in the neighborhood, but not on their own," said Hashem Ajili, deputy chairman of the council of leaders in northern Dora.

Such cautiousness is not unfounded. Al-Shimeri acknowledged that to join the police force, which is appealing to many Iraqis because it provides a stable income of about $550 a month, many recruits pay bribes or use family connections. Sometimes, he said, such recruits can be linked to sectarian militias. "That is the reality," he said. "I never did anything like that -- I'm going to look for good, hard workers. I'm not going to ask them whether they are Sunni, Shia, what their tribe is. But that is still happening."

Lt. Col. Steven Stover, the spokesman for the U.S. Army's 4th Infantry Division in Baghdad, said American troops have arrested Iraqi soldiers and policemen for assisting in sectarian attacks, although he could not say how many. "If an IED [improvised explosive device] goes off 50 meters away from the checkpoint, either they are the most worthless I.P.s in the country or they are complicit," Stover said.

Although they are far better equipped than two years ago, the Iraqi forces still lack basic equipment such as batteries, rubber gloves and fuel, which the Iraqi authorities are slow to provide, despite the country's recently reported $79 billion budget surplus. The United States has provided the Iraqi army with armored Humvees, but Iraq still has no facilities to fix them when they break down or get blown up.

Despite all this, the Iraqi forces have made huge leaps forward, Americans say. The Iraqi army, after a clumsy effort to wrench control of Iraq's southern port of Basra from Shiite militias, took the lead role in counterinsurgency operations in Baghdad's Shiite slums of Sadr City, the northern city of Mosul and, most recently, the Sunni heartland of Diyala, to the west of Baghdad. In two sections of the capital's Dora neighborhood, Americans have handed over security to the Iraqi National Police, a predominantly Shiite paramilitary force that receives more advanced training than the regular Iraqi police. "Admittedly, small sections, stabilized sections, but they are patrolling them without any American support," said Capt. Brett Walker of the 2-4 Infantry.

And during the SWAT instruction last week, American instructors hailed the trainees' skills in hand-to-hand combat, their understanding of the basics of searching cars and people, and, above all, their determination.

At the beginning of the SWAT team's fifth day of training, police Capt. al-Shimeri ordered the trainees to lie down on the ground and roll 200 yards down a road covered with sharp gravel. Later, after the policemen jogged for 15 minutes in 110-degree heat, Iraqi police Lt. Ashraf at-Tamimi ordered them to squat, put their hands behind their heads and duck-walk like that across a volleyball court as fast as they could.

The men protested: "We can't do this!" they moaned, with one declaring, "Saddam tortured us like this!" But they did as they were told, panting in the blistering sun.

"It's amazing, because American police complain that the [training] mats aren't thick enough. And these guys are grubbing around in the dirt," said an American civilian SWAT trainer who helped the 2-4 train the Iraqis. (He asked that his name not be used because his participation in the training is classified.)

In fact, the Iraqis even seemed to enjoy the training. "Before, we thought the insurgents had better training than the Iraqi police," said Haidar, who did not give his last name out of fear of retribution from militias who still target Iraqi forces and their relatives. "Now we are being trained by the best army in the world."

But Haidar said that it would be months, maybe even years, before he is comfortable conducting raids without any American presence. "We are not ready for that yet," he said. "There are still too many bad guys in Iraq."

When politicians in Baghdad and Washington make decisions about Iraqi forces' capabilities, they should take such lack of confidence into account, Capt. Walker said. "If they're saying they're not comfortable, then we should continue to train them," he said. "We don't know all the issues here and they do. They're the people who would ultimately know what it takes to secure Baghdad and Iraq."