The show trial in Guant

Why the conviction of Osama bin Laden's driver did nothing to undo the damage caused by Bush's policies in the war on terror. 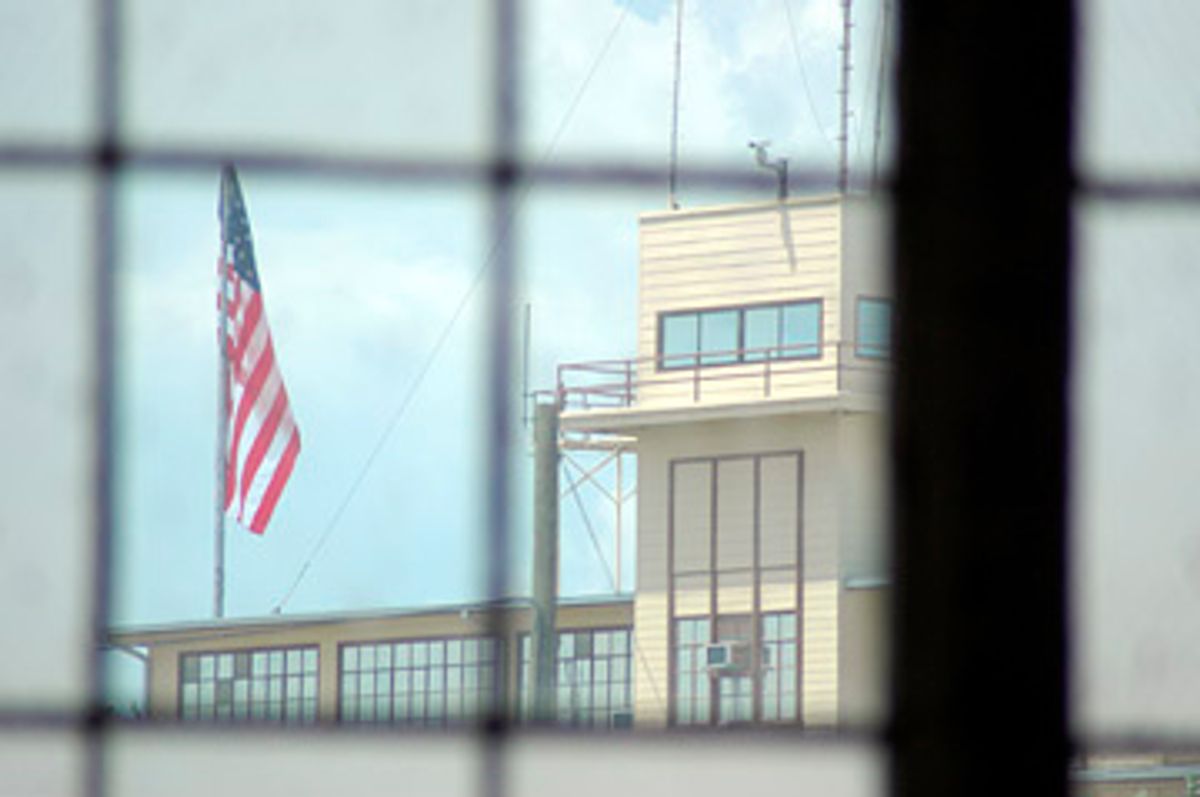 Swift made the argument to a military jury tasked with delivering justice for Hamdan. But ultimately, Hamdan's historic case amounted to a show trial, whose outcome -- a much lesser finding of guilt than the Bush administration prosecutors wanted -- only underscored the fundamentally flawed system at Guantánamo. As Michael Berrigan, deputy chief defense counsel for the military commissions, put it after the judge in the case barred some testimony against Hamdan that had been coerced, "Even show trials sometimes get off script."

The U.S. military prison in Cuba has long been perceived as undermining America's image as a champion of human rights and the rule of law, and Hamdan's trial did nothing to undo the damage. Regardless of the jury's determinations, the U.S. may well seek to continue detaining Hamdan indefinitely, beyond the termination of his sentence. The Bush administration asserts that it can hold Hamdan as an "enemy combatant" until the end of the "war on terror" -- which has no apparent end, of course -- even if he were cleared of all charges.

Contemplating that possibility at a press conference prior to sentencing, Swift stated, "Someone has to step forward to restore honor and integrity and our nation's rule of law. The soul of this nation has been damaged."

The tension in the courtroom was palpable before the military jury handed down the verdict. A planeload of journalists had arrived at Guantánamo that morning, and filed into the courtroom to hear the announcement (no doubt infuriating the smaller press corps that had literally camped out at Guantánamo for two and a half weeks covering the trial). The room was silent for nine painful minutes while the judge flipped through the findings worksheet. Finally, Judge Allred directed the head juror to read the verdict: Hamdan was acquitted of conspiracy to commit terrorism, the more serious of the allegations against him, but guilty of providing material support to terrorism by being bin Laden's driver and sometime bodyguard.

Prosecutor John Murphy seemed to turn white as the reality of the lessor convictions sunk in. But Hamdan, hearing a guilty verdict that carried a potential life sentence, buried his face in his hands and cried.

In a flurry of questions that ensued, media reporters asked whether the acquittals on some charges proved the system is fair. Undoubtedly the Bush administration wanted it to be viewed in that light. But the acquittals showed nothing more than the ability of military jurors to do their job by reviewing the facts and applying the law presented to them -- they can't fix a fundamentally flawed system.

During the sentencing phase of Hamdan's trial, the government had tried to invoke the Geneva Conventions -- which it had long argued were inapplicable to Guantánamo detainees -- to justify Hamdan's confinement in Camp 5, one of the prison's highest security camps where detainees are held in conditions akin to super-max conditions in the U.S. With no shortage of irony, Judge Allred interrupted, asking, "Geneva Conventions?! What Geneva Conventions?"

The prosecution also made a point of evoking the victims of 9/11. Although Judge Allred ruled that "Mr. Hamdan was such a small player, and so remotely involved, that it would be more prejudicial than probative" to admit inflammatory 9/11 testimony, Murphy implored the jurors in his closing argument to impose a sentence that "should reflect the victims' outrage at what he did." Portraying Hamdan as an unrepentant "al-Qaida warrior," Murphy said, "The government asks you to deliver a sentence that will absolutely keep our society safe from him." He requested a minimum 30-year sentence, and urged the members to consider that life might be more appropriate. "As for reform and rehabilitation -- I question whether that is even possible. The day may never come and the risk of releasing him might be too great."

But a few hours later in the prosecutors' press conference, Navy Lt. Cmdr. Timothy Stone, one of the prosecutors, stated that he "couldn't say" whether he thought Hamdan would be a threat if released back to Yemen. When asked why Murphy made a strong argument portraying Hamdan as a serious and unrepentant danger to society, Murphy explained: "I put on evidence to seek a conviction, but I accept what the members felt was fair."

Despite the years of uncertainty, isolation and abuse he has suffered in U.S. custody, Hamdan developed warm relationships with his American custodians. His attorneys, the interpreter, the psychiatrist, and even the military judge and a few of the guards appeared to have an affectionate rapport with him throughout the trial. At the airport, after the trial was over, military judge Capt. Keith J. Allred explained, "It's easy to be warm with Mr. Hamdan."

According to the defense team, Hamdan was orphaned at a young age and born into extreme poverty, and had eventually sought a job, not jihad, when he went to work for bin Laden. "Some go for the soup and stay for the sermon. Mr. Hamdan went for the soup and stayed for the soup," explained psychiatrist Dr. Keram, who spent over 120 hours evaluating Hamdan over the last three and a half years.

She said Hamdan never adhered to bin Laden's religious ideology, but just wanted to support his family and pregnant wife. When he learned of bin Laden's role in the East Africa Embassy bombings, the USS Cole and the 9/11 attacks, she said he was devastated. In an unsworn statement, Hamdan explained, "When I found out a lot of innocent people were killed in the United States -- I present my apologies if anything in what I did caused that."

Swift explained, "At some point, we will bring the people who brought those buildings down, and that's going to be a great day. The world will recognize it is justice and not revenge, and it will be all the more meaningful because we got the guys who did it -- not their driver."

Rejecting the 30 years to life the government requested, the members sentenced Hamdan to 66 months, knowing the judge would credit 61 months and seven days for time already served. When he heard the unexpectedly short sentence of five months remaining, a jubuliant Charlie Swift bowed his head, sobbed and enveloped Hamdan in a bear hug that lasted a full minute.

Judge Allred thanked the members for their service on this significant and historic case, but before they left, Hamdan spontaneously motioned that he wanted to say something to them. "I want to apologize one more time to all of the members and thank you for what you have done for me," he said.

In closing remarks, Judge Allred turned to Hamdan and said: "Mr. Hamdan, I hope the day comes when you return to your wife and daughters and country, and you are able to be a husband and father in the best sense of all of those terms."

Whether that day will come, of course, remains unclear. Although the Bush administration insists enemy combatants can be locked up so long as the global fight against terrorism is under way, Hamdan's continued detention after Dec. 31, 2008, when his sentence ends, will become less sustainable politically in light of last week's verdict. And at that point, the fate of Hamdan and Guantánamo's other inmates, and the future of the flawed military commissions themselves, will lie in the hands of a new presidential administration -- one that hopefully will set into motion a process resembling something more like justice.

Carol Chodroff, a former federal public defender in San Diego, is the advocacy director of the U.S. Program of Human Rights Watch.