As a kid, "The Wild Wild West" taught me about sexiness and desire -- and how two men could live together and love each other. 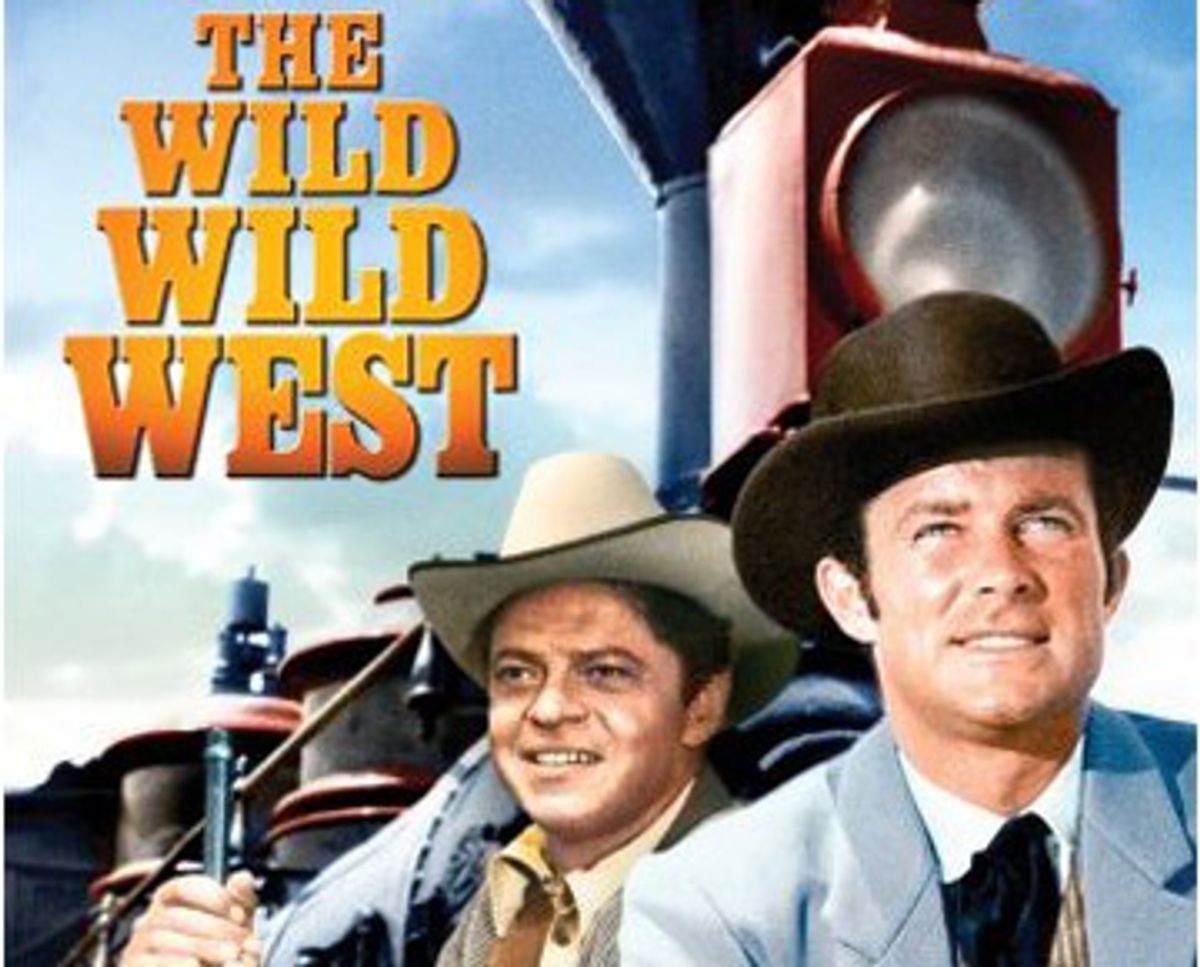 That three-word introduction in the pilot episode nicely spells out the Ian-Fleming-on-the-range conception behind "The Wild Wild West." The show -- which ran on CBS from 1965 to 1969 -- melded the then declining western form to the ascendant spy thriller, and then added some buddy-movie dynamics, a healthy dose of political intrigue and generous helpings of science fiction. The result was ... well, a mess sometimes, to judge from the DVD release of the show's fourth and final season. But at its best -- which is to say, in its earlier seasons -- "The Wild Wild West" stands as one of the most intriguing and literate actioners of '60s TV.

And one of the most baroque. At the behest of President Ulysses S. Grant, secret agents Jim West (Robert Conrad) and Artemus Gordon (Ross Martin) travel the Western territories in a souped-up private locomotive, foiling Blofeld-scale plots to assassinate world leaders, blow up cities and generate massive tidal waves. Yes, our nation's history might have turned out quite differently if Jim and Artie hadn't quashed all that evil post-Civil War R&D: steam-powered robots, disintegration force fields, miniaturizing potions, primitive tanks and TVs, paintings that serve as gateways to other dimensions. And don't forget the surgically implanted crystals that drive men to crime. And the special liquid distilled from burning diamonds that generates superhuman speed. And the jars that extract thoughts from disembodied brains.

Nobody took any of this very seriously, least of all the writers, but the show did require guest-actors who could walk the thin line between high and low camp: people like Harvey Korman, Agnes Moorehead, the now-forgotten Nehemiah Persoff and the never-to-be-forgotten Victor Buono (who played both the recurring baddie Count Manzeppi and, in the pilot episode, a Mexican revolutionary disguised as a Chinese grocer -- please don't ask).

The villain fans recall best is Dr. Miguelito Loveless, a dwarf-size inventor given to extensive monologues about truth, beauty and his own genius. As played by the great Michael Dunn, Loveless is perversely sensitive and strangely seductive, a thwarted artist (Dunn himself had a lovely tenor) who is as drawn to Jim West's glamour as he is threatened by it. In best Holmes-and-Moriarty fashion, the antagonists can never fully destroy the other: Every encounter ends with Jim spoiling Loveless' latest venture and Loveless slipping free of the law's grip. (After one foiled caper, he escapes by shooting himself from a cannon.) Dunn has avid eyes and a smile that lingers just two seconds past benignity, and whenever he's on-screen, "The Wild Wild West" rises to something greater than itself: a pop-Shakespearean study of character bent by biological destiny.

Beyond that, the show boasts a fine Elmer Bernstein-ish score by Richard Markowitz and a clever animated credit sequence that shows Jim West (shockingly, for that day) cold-cocking a knife-wielding damsel. But there's something else that comes through in repeat viewings. In fact, it's the same element most conspicuously missing from the 1999 big-screen remake starring Will Smith and Kevin Kline: a warm and delicate rapport between the two leads. The kind of homosocial bond, I mean, that suggests feelings a little beyond the homosocial.

Oh, let me come right out and say it. To a kid of the late 1960s, "The Wild Wild West" was as gay as a show could get. Like "I Spy," like "Batman," it was a portrait of two men in domestic partnership. Jim and Artie didn't just work together; they lived together, rode together, celebrated together. Of course, the show's creators took care to give Jim a vigorous and straight lifestyle. Virtually every episode finds him seducing -- and, in the same hot breath, reforming -- some busty blond minion. But more than heterosexual, Jim West is truly sexual, in a way heroes of westerns usually weren't. See how snugly his clothes are tailored to his form -- the bolero jacket, the extra-tight trousers (not to mention Season 4's leather chaps, which would not be out of place in a gay pride parade). And see how readily he takes those garments off at the slightest incentive. See how he carries that fine body of his. Jim West is a man who enjoys being desired.

And who is in a better position to appreciate that effort than Artie? Ross Martin has a rip-roaring time playing the character "in character" -- Artie's a master of disguise and dialect -- but in his scenes with Conrad, he becomes softer and more tranquil. Watching them together, you realize that while Jim is often focused inward, Artie is always looking at his partner. Where else would he look? He has no girlfriends to speak of (a fact he sometimes complains about). Then again, he doesn't seem to need them. It's a token of the two men's understanding that Jim can go off on his amorous rampages, safe in the knowledge that Artie's waiting back at the train, with the champagne magnum and the freshly chalked billiard cues.

I didn't quite grasp it as a kid, but "The Wild Wild West" showed me how two men could live together and love each other without forfeiting any of society's prerogatives. Which makes the show even more of a fantasy -- and even more of a pleasure. Long live Jim and Artie, in their train bound for trouble.