Bush looked weirder than he ever has during his Bob Costas interview -- but he made more sense. Too bad it's too late. 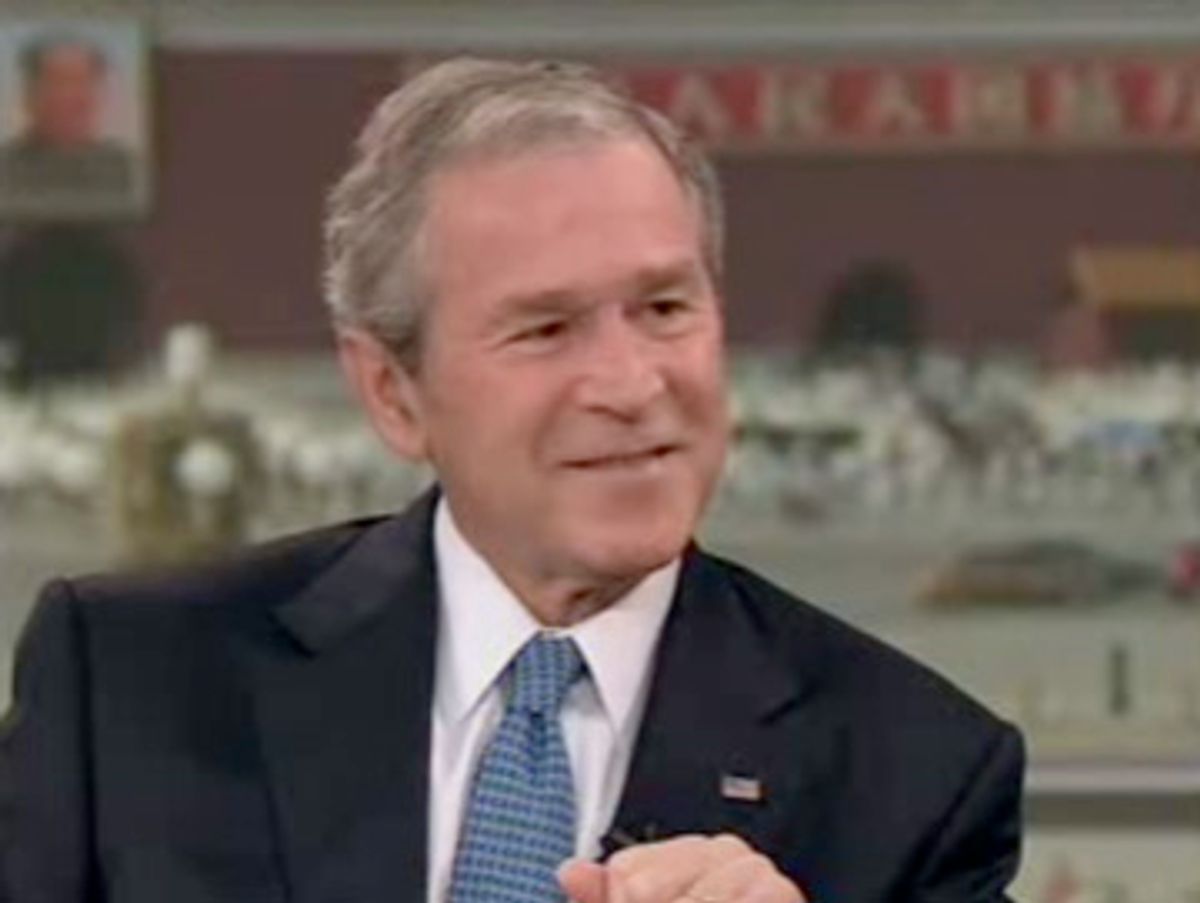 I know, this is a couple of days after the fact, but I just have to weigh in on President George W. Bush's bizarre appearance on NBC with Bob Costas during their prime-time Olympics slot. First of all, it was strange just to see Bush in such an intimate setting. I can't recall ever seeing him doing a one-on-one interview, certainly not in such an informal setting. It felt like we were getting a completely different view of Bush than we ever have.

Which brings up the second point: Bush's facial mannerisms were so odd, so truly eccentric, that it seems impossible that if Americans of any political persuasion had been exposed to them earlier, they could ever have elected him. I'm talking about his weird, canned and completely inappropriate smile, which he turned on Costas like an autistic beauty queen every time he finished answering one of the host's questions. It was a smile that made John McCain's notoriously wooden molar-exposure in front of a lime green background look spontaneous. Bush's strange smirk is fabled, but to my knowledge Americans have never been exposed to it like this -- I know I haven't. It was like an outtake from one of those cheesy used-car commercials that run on local stations. U.S. presidents have had their share of disturbing facial expressions -- Richard Nixon's devious, evil-courtier look ranks high -- but Bush's phony insta-smile may take the prize for inauthenticity. Who knows whether it's a tic, a self-congratulatory facial reflex ("I knew the answer to that question!"), or a weirdly aggressive way of covering up for a profound insecurity. But it ain't ready for prime time.

The painful irony, however, is that while Bush looked awful, the substance of what he said wasn't that bad. In fact, on the issues Bush came across about as well as he ever has. Costas did a solid job of asking him questions about the major Olympics-related news issues, from the Russia-Georgia conflict to Darfur to China's human rights record, and in response Bush was reasonably well spoken and seemed reasonably well briefed. More important, he came across as a realist and a pragmatist, not an ideologue. The scary Bible-thumping Bush did emerge for just a moment: In response to a question about reform in China, he said, "If you're a religious person, you understand that once religion takes hold in a society it can't be stopped" -- a weird answer, since Costas hadn't even mentioned religion. But in general, Bush didn't veer into his normal America-uber-alles pose. He said he had raised objections with both the Russian and Chinese leadership, but that what was important was to stay constructively engaged. Barack Obama couldn't have said it better himself.

There's an obvious reason why Bush was so pragmatic: He doesn't have many cards to play, either with China or Russia. Reality has a way of shutting up even the biggest braggarts and blowhards. But watching this odd and diminished man at the end of his disastrous term, it was hard not to think that if only he had not suffered from delusions of American omnipotence seven years ago, his presidency, and the world, would be a very different place.