Chaos in the Caucasus

An expert on Russian politics talks about what's behind the military assault on Georgia, and how the U.S. and Europe failed to prevent it. 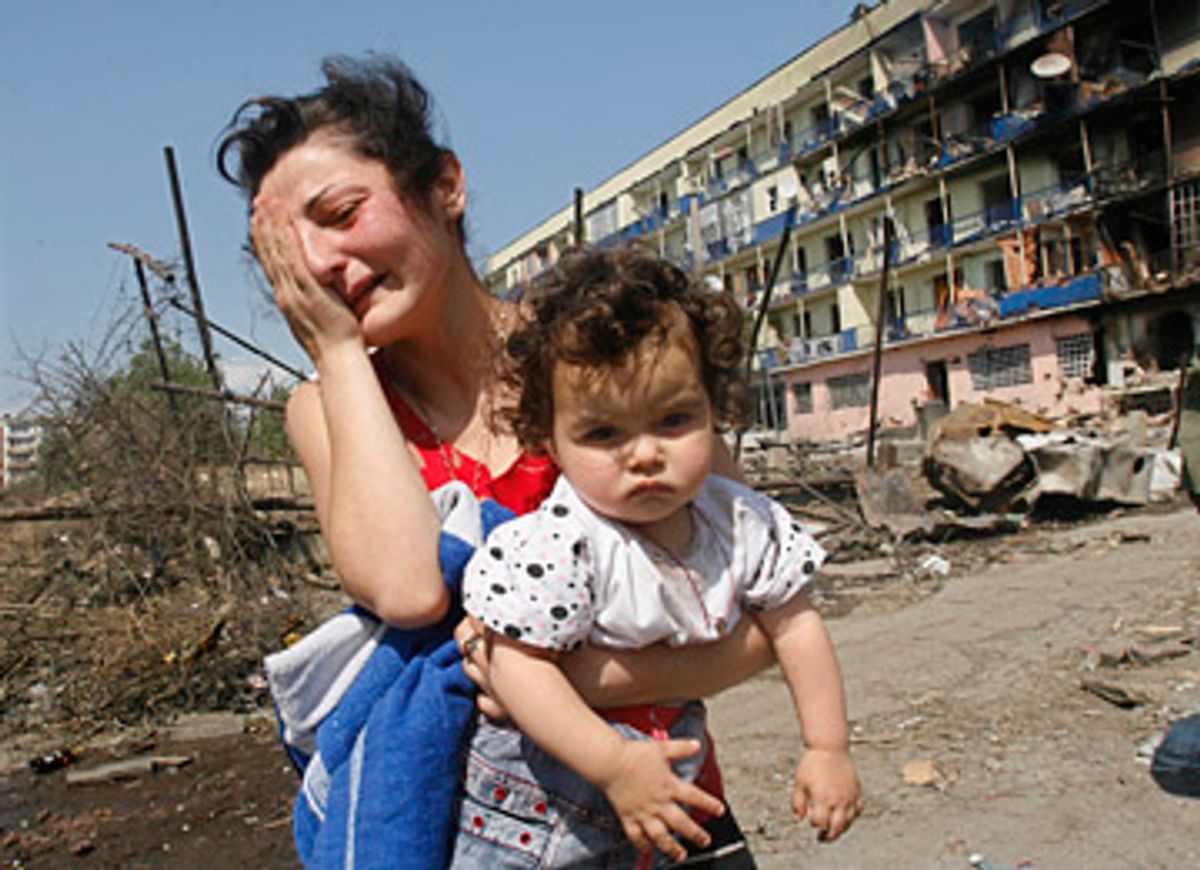 Russian President Dmitri Medvedev announced Tuesday that his country would stop its attacks against Georgia, declaring that the small southern country had been adequately "punished" for its own recent military actions against the separatist region of South Ossetia. Medvedev's agreeing to a cease-fire nominally ended the hostilities, with President Nicolas Sarkozy of France, who negotiated the agreement, then heading from Moscow to Tbilisi to negotiate with Georgian President Mikheil Saakashvili. According to several news reports late Tuesday, however, Russian attacks continued after the announcement in Moscow, including airstrikes and ground operations. The conflict seems far from over.

The Caucasus region to Russia's south has been a volatile place for years, with various factions struggling for control and post-Soviet Russia seeking to reassert its hegemony. To better understand how the long-simmering conflict boiled over into a full-blown assault by the Russians, Salon turned to Michael McFaul, an expert on Russian politics and a director of the Freeman Spogli Institute for International Studies at Stanford University. McFaul has also served as a foreign policy advisor to the Obama campaign. He spoke to Salon by phone on Monday night.

What is the conflict in Georgia all about?

There were skirmishes between fighters in South Ossetia and Georgia that went on for some time. President Saakashvili then decided he needed to use greater military force and actual soldiers to quell it. He went into South Ossetia, escalated the conflict in doing so and, by the way, struck civilian targets.

The Russian response to that was to invade Georgia, not just to try to get back to the status quo. They have been attacking cities in Georgia proper, and bombing civilian targets in Georgia proper. I think the bigger reason why we see this happening is that Mr. Putin -- and he’s the one calling the shots here, it seems to me, the prime minister, not President Medvedev -- decided [to do so] a long time ago. This was a fight that they have wanted to have for some time. The events of last week [in South Ossetia] were the trigger to make it happen.

The Russians are extremely frustrated with Georgia’s move toward the West, thinking of themselves as part of the Euro-Atlantic community, and especially upset about their petition to join NATO. The Russian leaders see the world in, I would say, very old-fashioned, 19th-century real-politick ways -- in terms of spheres of influence and regional powers and super powers. So what they’re trying to do, in a grotesque way, is to reassert Russian power in the region. But they’re not doing it through what we call soft power. They’re using hard power.

What does Russia have to gain from a protracted confrontation?

Does Georgia have anything to gain from extended conflict?

They have absolutely nothing to gain from this fight. They know, and they’ve said this repeatedly, that they have no chance to fight a war with Russia. The asymmetries are overwhelming. They are suing for peace unconditionally. They’re fighting for their lives, they’re fighting to survive, so I’m quite convinced when they say they want a cease-fire.

So why provoke Russia by sending troops into South Ossetia in the first place?

I think they miscalculated. I don’t think they anticipated that Russia would invade their country. I mean, I was very critical of the use of force against Tskhinvali, the capital of South Ossetia. I think that was inappropriate use of military force. Civilians died. But they didn’t anticipate that Russia would respond the way they did. And, let’s be clear: However awful it was, President Saakashvili was using force inside his own country, inside the borders of Georgia that all countries of the world recognize. Russia, when it invaded, was violating the territorial integrity of Georgia, and therefore violating all sorts of treaty obligations and international law that they’ve signed onto.

You mentioned Putin's role; is Medvedev, the Russian president, a relevant player in this situation?

If he is, he’s a really behind the scenes kind of guy. I mean, I haven’t been following closely who’s been saying what publicly, but all the optics and everybody in Russia that I know sees this as Putin’s show, not Medvedev’s.

I think it sends a very strong signal to everybody else in the Russian government, in the Russian presidential administration and abroad, that Putin is in control -- and not on just security matters, but all matters.

What do you think of the way the U.S. government has been reacting so far?

I’m convinced that this whole war could have been avoided. It was not inevitable. Had that kind of negotiation started, I think Saakashvili himself in particular would have been much more constrained in the initial use of force that he deployed.

How do the U.S., the E.U., the U.N. and to the extent that it’s participating, NATO, work effectively to get Russia to back down?

That’s the million dollar question which I do not have a good answer for. I think at a minimum you show solidarity with Georgia. You make sure all the allies are in line.

When it comes to punitive measures, though, the West is constrained. I think this is an important point. Part of the reason we’re constrained, and why we don’t have any leverage today, is because we don’t have much of a relationship with Russia. We’ve allowed it to deteriorate over the last several years. When you go and you look at your toolbox, and what leverage we have, there’s really nothing there. I think, if one compares to other periods and other crises, we’re a lot more limited because of the neglect of this relationship.

I know what I think it should be, I just don’t think it’s very probable. I think now we have to—we just can’t go back to the way it was before. [We need to focus on] permanently helping resolve these territorial disputes. But that’s going to be very hard to get to from where the situation lies now.