Eager to catch the ultraviolent WWII shootout "Inglorious Bastards," loaded with blaxploitation beefcake and naked chicks? Come on over! 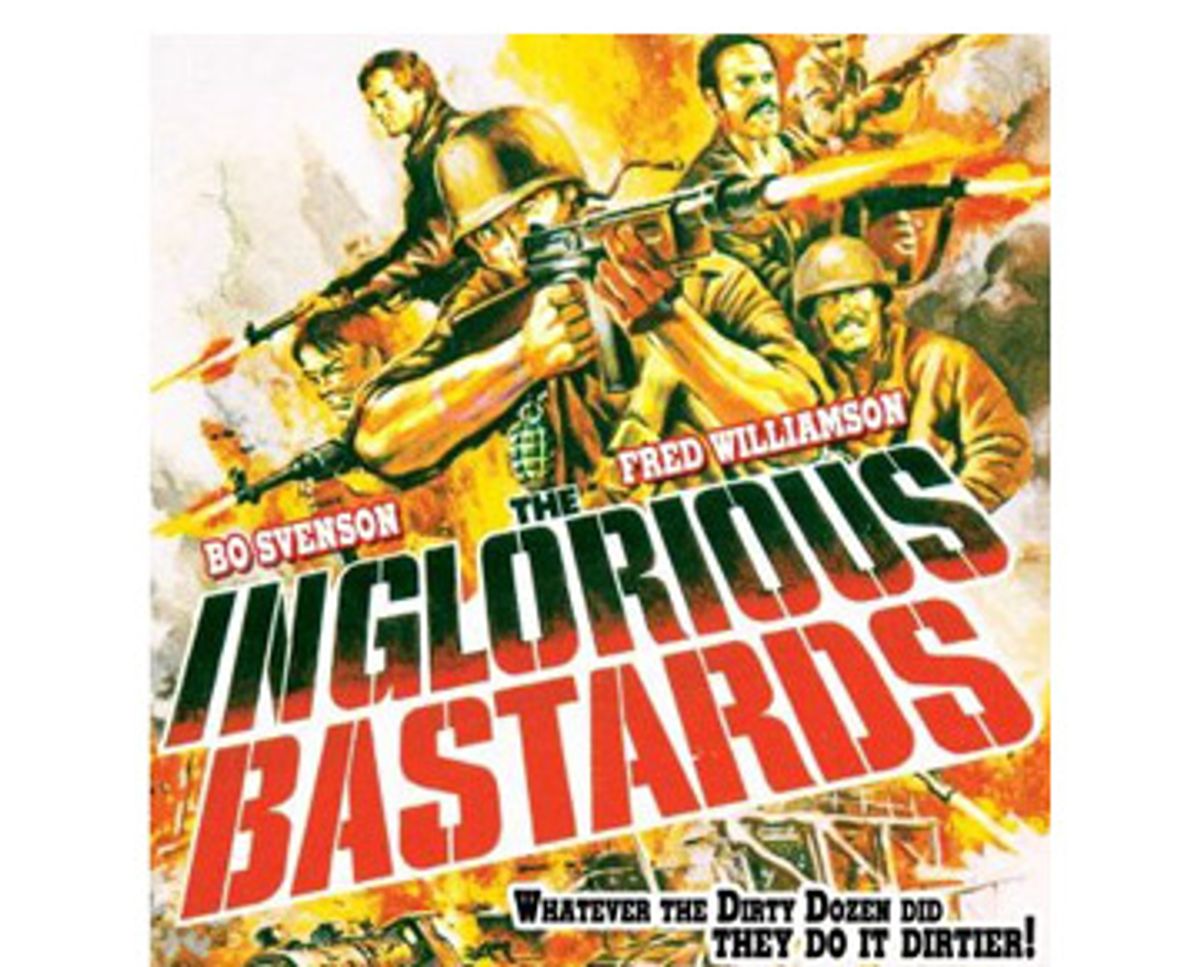 Well, I've got a trail of broken-hearted DVD publicists behind me and a pile of unwatched discs on the bedroom floor, but herewith I'm renewing my vows to throw an oddball DVD-of-the-week at you at least, oh, every other week. Do you imagine Quentin Tarantino's "Inglorious Bastards" as a half-campy, half-fatalistic violence-palooza with a racial subtext, plenty of cigar-chomping masculine humor and a brief interlude involving naked women frolicking in a swimming hole (with machine guns)? Well, you don't have to imagine it, because here it is.

OK, Tarantino didn't direct it, of course. And his long-contemplated and possibly forthcoming film, by all accounts, will borrow only the title and an off-the-shelf stock situation from Enzo G. Castellari's quasi-legendary 1978 Eurocult classic "The Inglorious Bastards," which brought together "Walking Tall" star Bo Svenson, blaxploitation legend Fred "The Hammer" Williamson and a whole bunch of Italian extras playing German cannon fodder. But hey, Quentin's here anyway (on one of his weirder hair days, it must be said), conducting a lengthy and enthusiastic discussion with Castellari that might be the most entertaining element of this three-disc special edition from Severin Films, the self-appointed "Criterion Collection of smut."

Mind you, Castellari's movie goes down pretty easy, especially if you grew up watching 1970s grindhouse flicks the way Tarantino did and can get a Proustian biscuit-high off its weird blend of cheapness and spectacle. But as my better half observed, the difference between "Inglorious Bastards" and "Hogan's Heroes" largely comes down to dubbed dialogue, curse-words, tits (seen exceptionally briefly in the aforementioned mädchen-out-of-uniform scene) and the unarticulated racial anxiety the film expresses every time Williamson appears on screen in his Angry Black Soldier role, a large, unlit brown cigar clenched in his teeth. As ever, the former NFL player has an impressive bod and a certain screen charisma, along with a remarkable inability to read his lines convincingly. Next to him, Svenson (a onetime UCLA Ph.D. candidate) comes off as a veritable Max von Sydow, speaking fluent German, cracking mordant jokes and generally expressing the pain of manhood and, yea, of humankind. Both of them get to shoot a whole lot of those Italian-German extras, who always die by jumping in the air and twisting vigorously in a counterclockwise motion.

Does anybody actually care about the plot? I hope not, because it's not that easy to follow. Svenson and Williamson play the de facto leaders of a gang of American ne'er-do-wells, on their way to court martials in 1944 France. Along with a handful of other stock characters (the thief, the racist, the coward) they escape amid a firefight and freelance their way across Europe, hoping to get to Switzerland but unable to resist volunteering for a suicide mission behind German lines. There's a dandy escape from a Nazi officer's castle, a bewildering shootout involving two groups of Americans in German uniforms and a massive train explosion, obviously shot using a model train. Did I mention the brief and completely incongruous scene involving some bathing beauties au naturel? The set also includes a making-of documentary, a locations featurette and an entire CD of soundtrack music, along with the highly enjoyable Castellari-Tarantino confab.