Robert Downey Jr. gives the most enjoyable performance of the year in this near-genius satire of Hollywood excess and vanity. 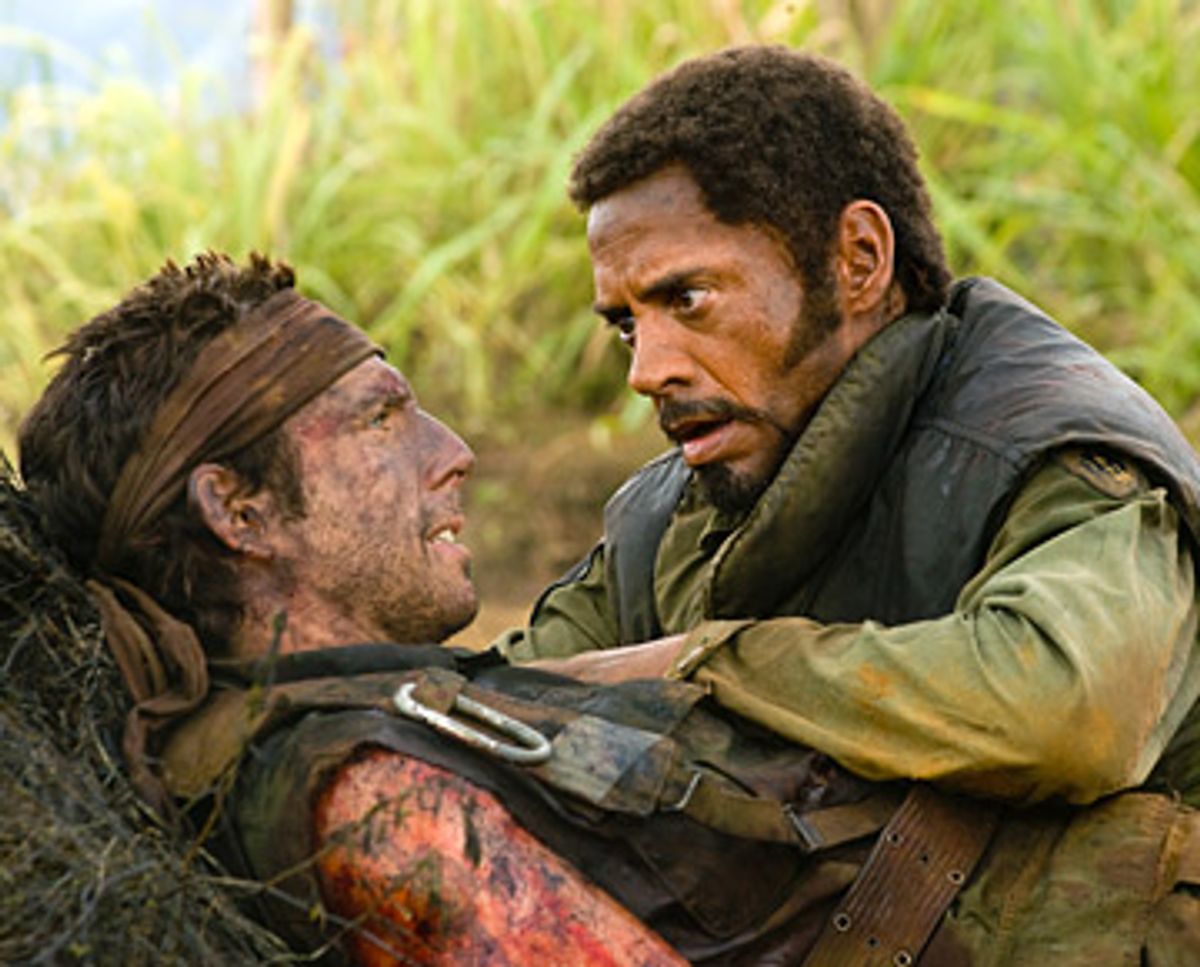 "Tropic Thunder" is an imperfect work of genius, a satire of Hollywood excess and vanity that dares to tread territory laden with minefields: Robert Downey Jr. plays an Australian actor so devoted to his craft that he undergoes a "pigmentation-alteration procedure" to play a black man. Ben Stiller is a muscle-brained action star who, in a bid for Oscar attention, makes a picture called "Simple Jack," in which he plays a mentally challenged farm boy. (The film actually uses the forbidden word "retarded.") Jack Black's character is the most wholesome of the three: He just plays a comic actor who has made a fortune out of donning fat suits and farting a lot.

But describing the characters so baldly removes them from their context, and in comedy, context is everything. "Tropic Thunder" -- which Stiller directed and, with Justin Theroux and Etan Cohen, co-wrote -- doesn't risk simply offending; at times the picture is almost appalling in its tastelessness -- I watched parts of it agape. But Stiller and his ensemble -- which also includes Jay Baruchel and Brandon T. Jackson in small but significant second-banana roles -- understand that comedy is anarchy. As much as we want our lives to be stable and manageable, comedy demands that we relinquish our sense of orderliness, sometimes even our better judgment. Respectful comedy is dull comedy. In the early '90s, when Robert Mapplethorpe's sexually explicit photographs were causing a flap about the public funding of art, I recall seeing people wearing buttons decreeing, "Art can't hurt you." But if it can't cut into you, deeply or at all, what good is it?

The same goes for comedy. "Tropic Thunder" is ridiculous and deeply enjoyable, but it also flashes a mercilessly polished mirror at the "prestige" products that the movie business so glibly feeds us in order to reflect glory back on itself. The picture also questions the way we congratulate ourselves for our appreciation of serious pictures and dedicated performances, as if, by applauding their quality, we might somehow be connected with some greater good. Movies can elevate us, helping us locate the best, most generous parts of ourselves. But that doesn't diminish the fact -- as "Tropic Thunder" so painfully reminds us -- that "quality" movies are sometimes made by absolute assholes.

"Tropic Thunder" details the making of a picture touted as "the biggest war film ever," a Vietnam drama that's being filmed in Southeast Asia by a prestigious but less-than-competent director (his name, stupidly hilarious by itself, is Damien Cockburn, and he's played by Steve Coogan) and a cast of actors whose egos are as big as water tanks and as fragile as quails' eggs. The picture is off-schedule and over budget, the performers are messing up right and left, and Cockburn's ass is on the fryer. So he leads his actors -- including the deeply self-serious Australian Kirk Lazarus (Downey), the loose-cannon druggie Jeff Portnoy (Black) and the neurotic, pumped-up action guy Tugg Speedman (Stiller) -- deep into the jungle to scare good performances out of them: Call it "The Blair Witch Project" approach, in which actors can't be trusted to actually act. From there, the production becomes nothing but chaos. In fact, it ceases being a production at all.

Nothing is sacred in "Tropic Thunder" -- when a character, wounded in combat, wails, "I can't feel my legs!" the absurd predictability of the line practically brings down the house. Another wounded guy pulls at his gut, and strings of noodly faux innards, slimy with tomato sauce, spill -- and spill -- into his hands. Stiller and his gang happily take potshots at the war-is-hell realism of movies like "Saving Private Ryan" -- the point being that movie realism may be dramatically effective, but it isn't in itself heroic.

The actors playing actors in "Tropic Thunder" needle one another, cajole one another, boost one another's confidence (even as they're backhandedly shooting it down). They see themselves as craftsmen striving for authenticity in an artificial world -- which is why Stiller's Tugg Speedman, an insecure mess, tried to bring a patina of class to his career by playing that simple-minded farm boy. When, in the clips from this fake movie, Simple Jack utters a line like, "It makes my eyes rain!" the joke isn't on the disabled. Whenever I hear a line like that in a real movie, I think, Who writes that crap? Or, more specifically, who has the nerve to think he or she can get away with it? The scene in which Downey's Kirk Lazarus dissects Tugg's "Simple Jack" performance is the most brilliant excoriation of "Rain Man"-style acting I've ever seen.

A coalition of disability-advocate groups is organizing a boycott of "Tropic Thunder" based on what they see as the offensiveness of the "Simple Jack" gags. Stiller has defended the "Simple Jack" gags as a satire of prestige-seeking actors, not of people with disabilities, and his argument holds water. You could say the gags are offensive, to the extent that they use language we've sought to abolish in everyday speech. But comedy needs the right to be offensive, and Stiller at least has the courage of his convictions: When he uses the word "retard," it's deliberate, not casual. The "Simple Jack" jokes would be more offensive if Stiller had substituted tasteful, half-assed synonyms for the word we all know we're not supposed to use.

That said, it's a good thing that Les Grossman isn't his producer in real life. Unless you've been living under a rock for the past few weeks, you probably know by now that Tom Cruise shows up in "Tropic Thunder" as the aforementioned Grossman, the war movie's bullying, foulmouthed producer. Cruise's bulky, fur-covered forearms and thick, meaty hands are prosthetics, but they look so convincing they're almost more horrifying than they are funny. Cruise gave his finest performance -- and maybe his only good performance, period -- in Paul Thomas Anderson's "Magnolia," but this one is a close second. Cruise is loose here -- no, make that wholly unhinged -- in a way he has never been before, perhaps other than on Oprah's couch.

In fact, the only disappointment among the actors in "Tropic Thunder" is Black: His role is underdeveloped -- there's nothing for him to sink into -- and he relies too much on his stock maniacal gleam. But Downey more than makes up for the deficit. I don't think I've enjoyed any single performance this year as much as the one he gives here -- not because it's, heaven forbid, prestigious, but because its boldness is so go-for-broke delightful. Downey's Kirk Lazarus -- as a white guy -- is a Russell Crowe doppelgänger: Downey has Crowe's locution and his mannerisms down to an almost cruel degree of precision. After his "procedure," Lazarus becomes a bubbly jiver -- this isn't a mimicry of black speech but a mimicry of white people's idea of black speech. Trying to earn the respect of the movie's real black actor, a performer/celebrity named Alpa Chino (Brandon T. Jackson), he launches into an impassioned speech about how African-Americans have struggled to overcome adversity. Alpa immediately recognizes his spiel as the theme song of "The Jeffersons" and calls him on it. Downey's Kirk Lazarus is so full of himself that he'll appropriate a skin color, a history of oppression, a TV theme song, all in the service of his craft. That's not just satire -- that's genius. It's the kind of thing that wins awards, at least in Kirk Lazarus' mirror world.