George Lucas fills in the "Star Wars" blanks with an animated tale that may make more sense than his live-action films. 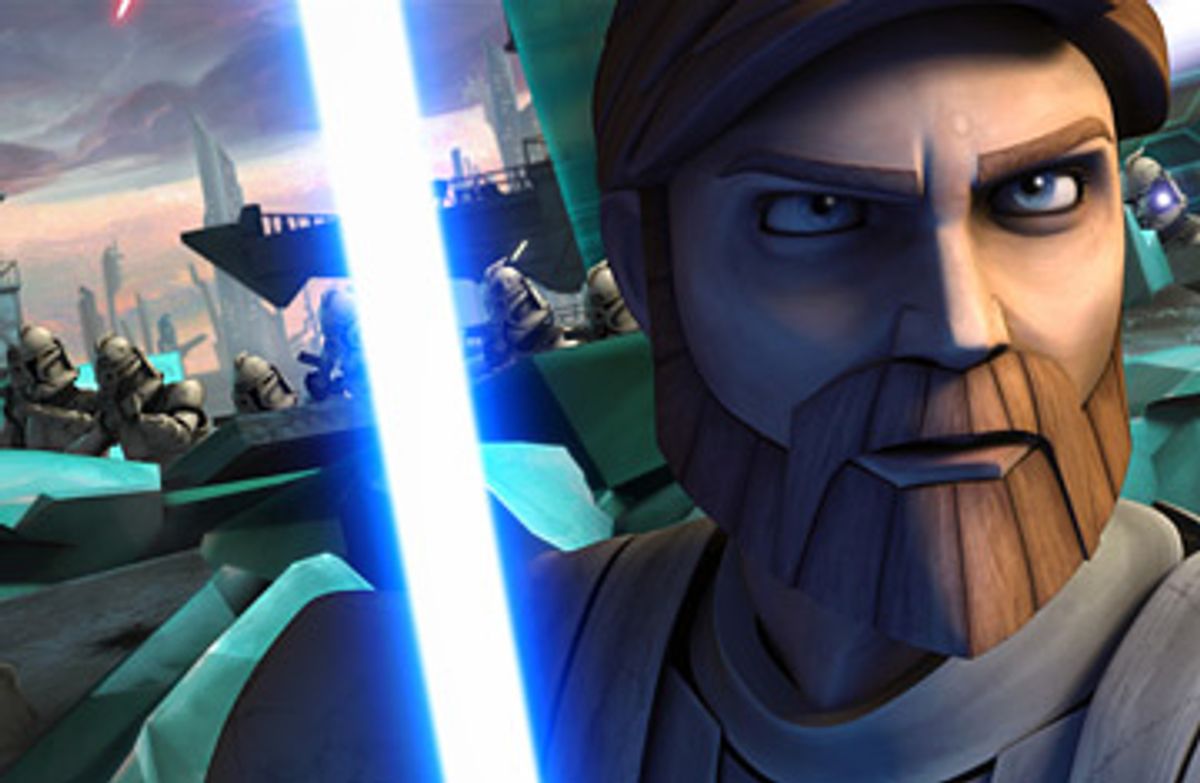 In the IMDb entry for "Star Wars: The Clone Wars," George Lucas is credited as creator of "characters and universe." And on the seventh day, he saw what he had created, and he just couldn't stop. Lucas is still working hard to keep his universe alive, this time in an animated movie -- the first from Lucasfilm Animation -- that fills in some narrative gaps between "Star Wars Episode II: Attack of the Clones" and "Star Wars Episode III: Revenge of the Sith."

Maybe those are gaps you didn't know needed to be filled, but for what it's worth, "Star Wars: The Clone Wars" is a convoluted tale in which Anakin Skywalker (voiced by Matt Lanter), Obi-Wan Kenobi (James Arnold Taylor) and a Bambi-eyed Jedi Knight-in-training named Ahsoka Tano (Ashley Eckstein) join forces to rescue the kidnapped Huttlet offspring of Jabba the Hutt (Jabba's gurgling is supplied by Kevin Michael Anderson), partly as a way of counteracting the evil intentions of Count Dooku (Christopher Lee) and his efforts to garner Jabba's support for the Separatist cause. Or something like that. The movie -- written by Henry Gilroy and directed by Dave Filoni -- gets more cluttered and confused as it moves along, though it's dotted with so many generic battle scenes and paint-by-numbers light-saber combat sequences that you can see how it's at least attempting to mimic the illusion of excitement.

But the one thing "The Clone Wars" does have going for it is its animation style, which is hardly revolutionary -- and that's exactly what's interesting about it. Lucas and Filoni were reportedly inspired by the '60s British television show "Thunderbirds," whose characters were creepy, awkward-looking marionettes. Thankfully, the characters they've designed don't look as spookily deranged as the Thunderbirds did, and the environments they're placed in are a mix of smooth and grainy textures, rendered largely in medium-cool tones. The images are rather flat looking, and the characters' movements are jerky, but there's something comforting about that, particularly in the context of the unsettling hyperreality of, say, the "Shrek" movies.

Lucas was going for a more stylized look here, and as dorky as this picture is, some of the visuals work well, particularly when it comes to character design. As much as I love the live-action Christopher Lee, the animated Count Dooku is surprisingly effective: He's an elegant, elongated figure who looks as if he has been carved out of some special wood, like the statues of St. Joseph you used to find in Catholic churches circa 1969, when the church decided it was high time to get groovy, artwise. (Lee and Samuel L. Jackson are among the few actors from the original films who agreed to do voice work for this project.)

What's more, there's something to be said for rendering the "Star Wars" universe in animation, as opposed to live action. It's easier to buy dialogue like "I sense Count Dooku's part in this" and "Surrender the Huttlet or die, Skywalker!" when it's emerging from the mouths of cartoon characters -- live actors shouldn't be subjected to such indignities. Still, the unapologetic cartooniness of "The Clone Wars" doesn't necessarily make Lucas' trademark stiff, pompous-sounding chitchat more meaningful -- just more bearable. You'll sense Count Dooku's part in this, all right. You can smell it coming a mile away.