Can a sapphic love scene between Scarlett Johansson and Pen 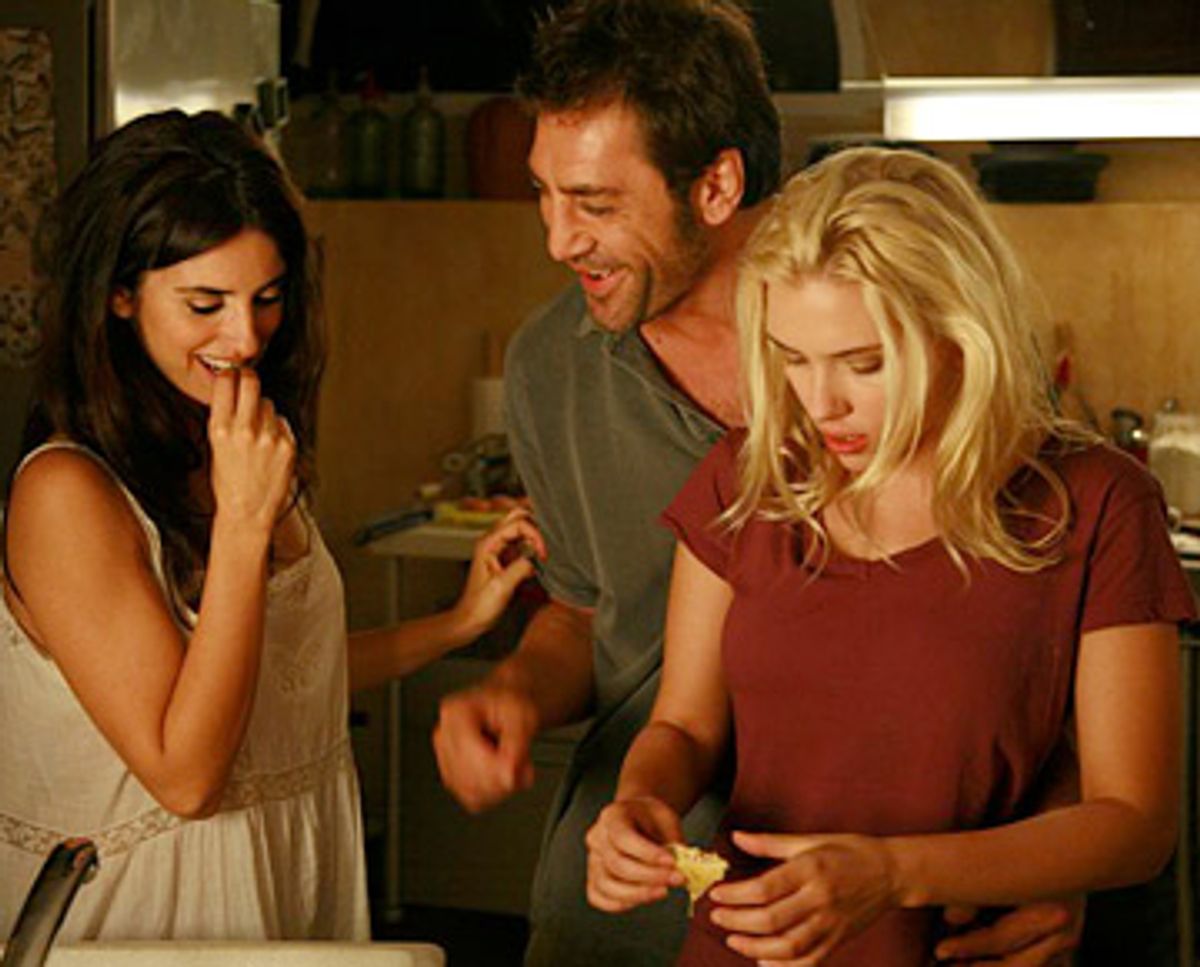 If you're the right age to remember Woody Allen as a lightning-rod cultural figure -- as a much-lionized great man of American cinema and then as the center of a sordid tabloid scandal -- it remains puzzling to observe that he's nothing of the sort today. Allen began his career as a mildly acerbic comic entertainer, and at the moment it looks like that's how he's going to end it. His new comedy "Vicky Cristina Barcelona" (which I first covered at Cannes earlier this year) has been widely acclaimed as one of his best in recent years, which is true but is also mighty faint praise. It's literally difficult to believe that the person who made this picturesque, clueless, oddly misanthropic picture also made "Annie Hall" and "Crimes and Misdemeanors."

It's not that "Vicky Cristina Barcelona" isn't entertaining enough, after its own upper-middlebrow sitcom fashion. It's got its eponymous city's glorious Gaudí architecture and surrounding countryside (along with an important side trip to Oviedo) and four attractive actors, coupled -- and three-wayed -- in various permutations of romantic confusion. Yes, it's even got Scarlett Johansson and Penélope Cruz enjoying a brief snog-and-cuddle session in a photography darkroom, although I have to say the illusion of erotic electricity between them is pretty minimal. Anyway, instead of getting hot and bothered during that scene I was asking myself the kinds of disgruntled questions I wanted to ask all the way through the movie, such as, Who the hell still has a darkroom these days?

Yeah, I know; some people still have darkrooms. In fairness, one of the few distinguishing characteristics of Cristina, Johansson's post-graduate American wanderer, is that she prefers old-school film to digital photography. It's more that Allen is so implacably detached from the lives of his characters that he neither makes them seem part of the real world nor creates a convincing imaginary world for them. Vicky (Rebecca Hall) and Cristina are rich American college girls out of the 1950s, possibly by way of Tom Wolfe's "I Am Charlotte Simmons," rather than persuasive facsimiles of the real thing. (As far as we can tell from the clothes, cars and telephones, this film has a contemporary setting.)

One could certainly argue that the upper-middle-class Upper East Side of "Manhattan" or "Hannah and Her Sisters" was minimally connected to life in the real New York or anywhere else. But it was a world Allen inhabited and understood, whereas the world of "Vicky Cristina Barcelona" seems both borrowed and sloppy. We're supposed to accept that Vicky has come to Barcelona expressly to write her thesis about Catalan identity, but can't even speak restaurant-level Spanish or Catalan. That's some kind of inherited Allan Bloom screed about the lameness of American education, not viable satire. Her fiancé (Chris Messina), a one-note dork bound for a Wall Street job and a house in Westchester suburbia, likes to play bridge. Hello? What century is this, Woody? When was the last time anybody under 40 played bridge, except at some so-square-it's-hip 1950s retromania party?

Even if Vicky seems like a finishing-school girl extracted from some knockoff Mary McCarthy novel, at least Hall -- an English actress with a horsey, expressive face -- imbues her with some vulnerability and confusion, and with an unexpressed yearning for a destiny different from the one laid out for her. When tipo suave bohemian painter Juan Antonio (Javier Bardem) approaches our heroines in a Barcelona restaurant and announces that he'd like to sleep with both of them, Vicky rejects him with such fervent and absolute certainty that you just know she'll be rockin' his all-night disco down to the foundations sooner or later.

Cristina, on the other hand, proves comically easy to seduce, and promptly joins Juan Antonio upstairs for a little, you know, cognac and conversation. That's less dramatically interesting, and Allen has to resort to a tedious plot cliché to get her out of Juan Antonio's room and delay their consummation so that the movie will last longer than 20 minutes. But then, Cristina is a remarkably uninterested and uninteresting character, about whom we learn almost nothing except that she feels a fatuous longing to be free of American Puritanism and lead an artist's life (or maybe an artist's mistress's life) in the Old World. I don't dislike Johansson as an actress, overexposed though she may be, but she requires careful focusing and Allen's undercooked script does her no favors.

Eventually Cristina shacks up with Juan Antonio while Vicky eats her heart out on the sidelines, neither of them realizing that his nutso former flame Maria Elena (Cruz), armed with teased hair, short skirts and a pistol, isn't quite out of the picture. When Bardem and Cruz are in the film together, ripping into their Latin-lover caricatures with gusto, they hijack it almost completely away from the enervated Yankettes. (Allen doesn't speak Spanish, and uncharacteristically allowed Bardem and Cruz to freelance extensively on the set.) In fact, for my money Cruz's modest supporting role is the best thing about the movie. Compare this performance with her roles in "Elegy" and "Volver," for example, and you see that Cruz has a much wider range than her eye-candy reputation suggests. As IFC's Alison Willmore noted in Cannes, from a woman's point of view Maria Elena is the ex-girlfriend from hell -- a brilliant, volatile bombshell and fearless sexual adventurer.

Like most of Allen's work over the past 20 years and more, "Vicky Cristina Barcelona" is likely to receive a warmer reception in Europe than in America, but the reasons for that, in this case, are not edifying ones. Looking past the fact that Allen made this film as a roaming director for hire, who was promised Spanish financing if he'd use Spanish locations and a Spanish crew, he has never pandered so nakedly to middlebrow European prejudice. One can speculate that he was shooting for a Henry James-style parable about American innocents abroad, but what he wound up with was an intermittently amusing fairy tale with a nasty sting in its tail, one that punishes its American characters for their shallowness and cowardice and rewards its Europeans for their worldly sophistication. The bad news for Woody is that Americans don't care enough about him anymore to take offense.

"Vicky Cristina Barcelona" is now playing in New York, Los Angeles and other major cities, with national rollout to follow.