As a former elite gymnast myself, it's hard to watch Olympic competition. But then Nastia Liukin and Shawn Johnson blew me away. 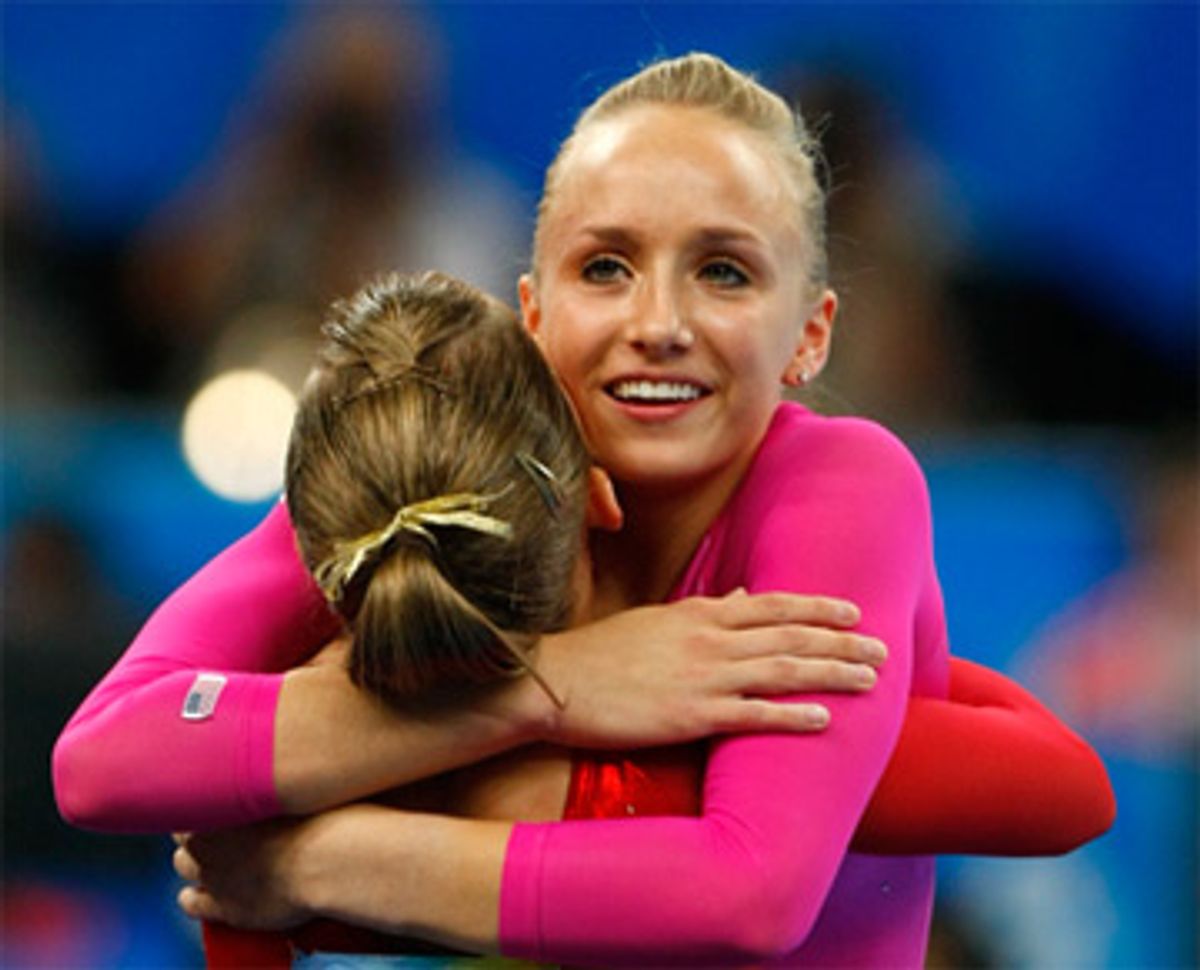 My post from the other day, "The Beast," was my teeny-tiny effort to reveal something honest yet a little bit ugly in my not altogether black soul, not, as widely perceived, an aggressive attempt to insult every amateur athlete who reads Salon. Nonetheless, I took the feedback seriously and decided to watch the women's gymnastics final with actual people, in an effort to take the kindly offered advice of the commenters and get over it. I settled in with a close friend and my oldest son, age 8, by my side, as I made an attempt to exorcise the foul stench of self-righteousness and put all that therapy to work, once and for all.

We settled in. My son to my left, close friend to my right. The marquis event was preceded by an inordinate amount of women's beach volleyball, endless swimming and occasional dozing by the three of us. But coffee and pistachios kept us going in the marathon wait for Nastia Liukin and Shawn Johnson. There was plenty of time for chatter while awaiting the main event.

In the long run-up to the 11:30 p.m. start time, I decided that I was pulling for Liukin in a desire to see grace count for something in this sport again. I didn't really believe she could pull it off, but I rooted for her just the same. She fell behind on the first event, vault, crippled by a lower start value on her one and a half twisting Yurchenko, despite what looked to be flawless execution.

Close friend who shall remain nameless, lest she be criticized for being kind to beast, didn't care. She thought the whole thing was boring, which I can't quite wrap my head around. She made a few snarky comments with accompanying demonstrations of the weird gymnastic-y "dance" moves that can resemble a Nazi goose step. I suppose I hadn't really put myself up to much of a challenge after all, watching with these two.

Johnson was in the lead after the vault. She took a single step to the side after her two and a half twisting Yurchenko, the highest-start-value vault of the competition, and my son asked, "Can you do that, Mommy?" I explained that Mommy doesn't belong in the same room with that child. He nodded all too knowingly.

The 16-year-old Johnson was magical, undeniably perky and nearly perfect throughout the night. NBC's slightly overdone tales of her normalcy were utterly convincing, and her sweet and supportive coach, Liang Chow, deserves a medal of his own for raising such a seemingly lovely young lady while training one of the very best gymnasts in the world. Liukin was markedly withdrawn, digging down deep for the upset she knew was possible. Her father and coach, Valeri, watched sternly from the sidelines. My friend piped up, "I'm not sure about that dad coach thing. If she doesn't win, will he comfort her as a dad, or show disappointment as a coach?" Good question.

We were all getting along famously. I wasn't even irritable. Until Elfi Schlegel's, Tim Daggett's and Al Trautwig's droning voices and grating commentary put me over the edge. The constant criticism over every barely visible "balance check" on the balance beam, every horrified "that's a big step," every in-depth perseveration over whether a move was connected enough to get an extra 10th in start value on the balance beam. They never stopped talking. Daggett and Schlegel almost seemed to bicker over the wobbles on dance moves. Then Trautwig would inevitably say something incomprehensibly inane like, "If you could allow yourself to think [about being in the Olympics], it could be daunting." Ya think? Or, my favorite, in reference to the Chinese competitors, he said something to the effect of "send them in to ruin the American dream." Wow. And his crowning glory, when they cut to Mary Lou Retton in the audience: "How about a perfect 10 lady!"

Less talk would have been better. Perhaps a bit of information about the skills these girls performed, what it takes to learn them, where the dangers lie. I suppose getting too technical about the tricks could get boring. But then maybe silence would have been the best policy. Certainly three commentators were too many.

By the time the final event came around, I was cheering for Nastia while praying for it all to end (it was 12:45 a.m.). My son and friend were sound asleep. And Trautwig had officially worn out my patience.

And then, in the second-to-last routine of the aired competition, Liukin came through with a floor routine that showcased her ballerina poise and well-concealed but explosive power. She won by more than a half point. Her face cracked with emotion for the first time during the entire competition when Johnson's score -- the final score of the competition -- was flashed and she realized she'd won. Johnson was second, and in a display of unmatched dignified maturity and generosity, she approached Liukin, tapped her on the shoulder and gave her a heartfelt hug. These two were something to be proud of.

And I did OK as far as keeping the beast under cover. My difficulty wasn't nearly high enough but my performance was pretty good. No overt outbursts or even internal struggles. I'll have to give myself a bigger challenge next time with provocative viewers who might push my buttons. That's when I'll really have to prove my own nerve and character. I'm hoping to show a mere fraction of the grace under pressure that Liukin and Johnson showed to take the No. 1 and No. 2 spots in the women's individual all-around competition.