Neither candidate speaks with much candor about solving the energy crisis. But the GOP will use U.S. oil drilling as a weapon against Obama. 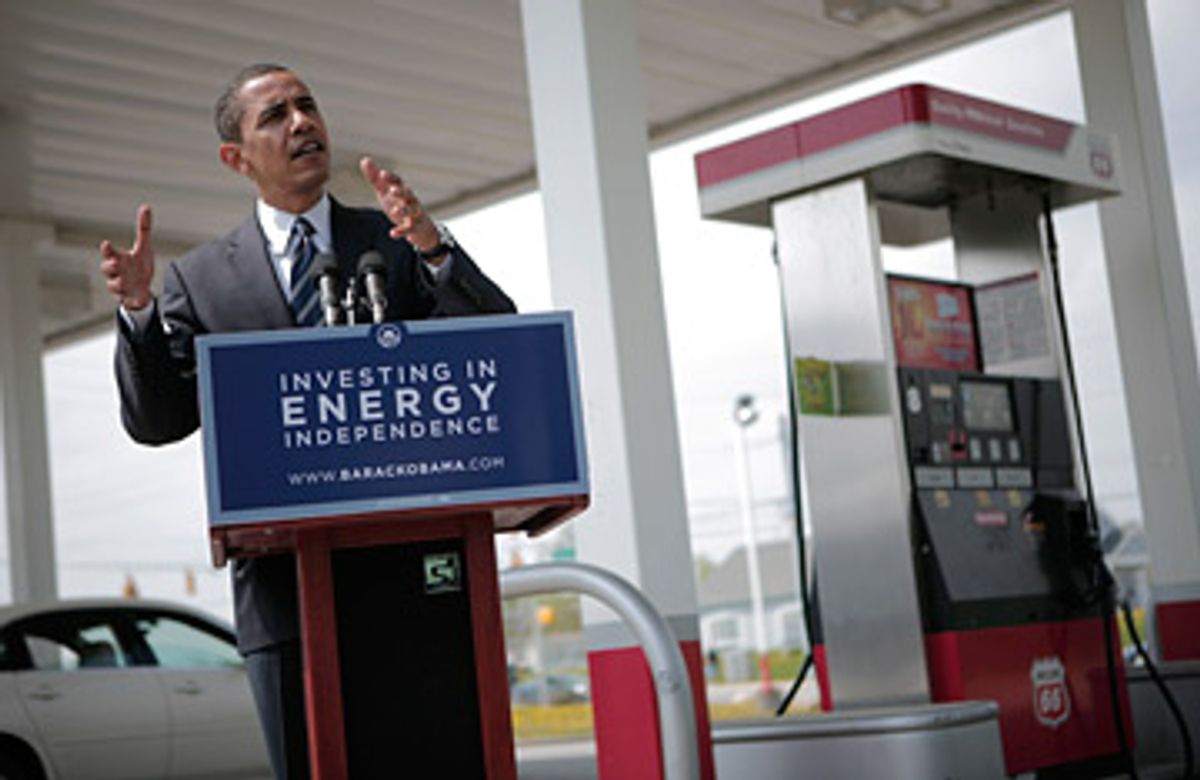 The first thing that leaps out at you these days at John McCain's Web site is his ballyhooed energy plan "to ensure our national security, economic prosperity and clean environment by breaking our dependence on foreign oil." But there is a word missing in both the online summary of McCain's "Lexington Plan" and his late June speech announcing it -- the word "sacrifice." For all of McCain's patriotism, for all his boasting about "straight talk," there is barely a whiff in the Arizona senator's public comments that the wrenching transition away from Middle Eastern oil will inconvenience any American or require anything more arduous than voting Republican in November.

Barack Obama too is an honors graduate of the Political Academy of Painless Dentistry. During the Olympics, the Obama campaign has been running a gauzy ad so uplifting that it makes Ronald Reagan's "Morning in America" seem like an Edward Hopper painting. As the TV screen glows with scenes of happy workers, the offscreen narrator buoyantly promises, "The hands that install roofs can also install solar panels. The hands that build today's cars can also build the next generation of fuel-efficient vehicles. Barack Obama [will] ... create 5 million jobs developing homegrown energy technologies." The underlying message is that global warming and an Obama presidency will spur the biggest jobs program since Franklin Roosevelt's WPA. As Democratic pollster Mark Mellman, who is not affiliated with the Obama campaign, explains, "One of the most important ways of positioning on global warming is to emphasize the jobs issue, since it appeals to people who you might not otherwise reach with your message."

A major difference between Obama's and McCain's rhetoric on energy is that there are periodic public hints that the Democrat knows better. Delivering the commencement address at Wesleyan University in late May, Obama said with admirable candor, "On the big issues that our nation faces ... some sacrifice will be required -- not only from you individually, but from the nation as a whole. There is no magic bullet to our energy problems, for example, no perfect energy source." But lines like that, oddly enough, do not seem to show up in stump speeches and TV spots.

Candor is, of course, a dangerous commodity in the middle of an election campaign. Truth-telling earns a would-be president little if it ends up costing him, say, Michigan, Ohio and Pennsylvania -- and the White House. After a Bush presidency built around the hedonistic philosophy of "damn the deficit, tax cuts ahead," it is difficult to restore gimlet-eyed realism to political policy debates. In a speech in Harry Truman's home town of Independence, Mo., in late June, Obama declared, "The call to sacrifice for the nation's greater good remains an imperative of citizenship. Sadly, in recent years, in the midst of a war on two fronts, this call to service never came. After 9/11, we were asked to shop."

Yet Obama avoids spelling out what sacrifice might entail when it comes to energy. Instead, chastened by national polls showing that roughly two-thirds of the voters favor the gimmicky nostrum of expanded offshore oil drilling, Obama backtracked from his blanket opposition. Already reeling from sticker shock at the gas pump, Americans voters are wary of, but not unalterably opposed to, further price increases for energy. An ABC News/Planet Green/Stanford University poll released last week found that 57 percent of voters would support a cap-and-trade system to limit carbon emissions by companies even if it increased the price of electricity by $10 a month. But raise the monthly cost to $25 and the constituency in favor of cap-and-trade drops to 47 percent.

The Republicans on Capitol Hill are eagerly circulating a late July memo written by pollster John McLaughlin for Virginia Rep. Eric Cantor, the deputy GOP whip. The memo, which has not previously been written about, bluntly states, "Plenty of recent media polls demonstrate that drilling for more American oil, particularly offshore drilling, has the potential to be a very effective wedge issue for Republicans as a way to reduce the price of gas." After tapping a gusher of public polling to buttress his argument, McLaughlin concludes, "For the immediate short term, right now, forcing House Democrats to vote on drilling offshore and in wilderness areas, or exposing their refusal to hold this vote, would be a potentially strong wedge issue that would split the Democrats, win among Independents and excite the Republicans."

Small wonder that Gene Karpinski, the president of the League of Conservation Voters, which opposes offshore drilling, says with grudging admiration, "The Republican echo chamber has done a great job on this."

Talk of sacrifice immediately conjures up images of Jimmy Carter's 1979 "malaise" speech, even though the president never used that foreign-sounding word. (Full disclosure: I was a Carter White House speechwriter, but I did not work on that particular address.) Reading that speech now, it seems as prescient as any Al Gore warning about global warming. "This intolerable dependence on foreign oil threatens our economic independence and the very future of our nation," Carter said, using words that would sound contemporary coming out of Obama's or McCain's mouth. "The energy crisis is real. It is worldwide. It is a clear and present danger to our nation. These are the facts and we must face them."

The mythology surrounding Carter's speech is that his grim realism sealed his political fate. In truth, the initial reaction to the speech was positive and what doomed Carter was his follow-up gambit of purging his Cabinet, which created the image of a presidency in full Chernobyl-style meltdown. But these memories -- and the political will to confront our national addiction to foreign oil -- vanished amid the warm glow of the Reagan presidency. The Ten Commandments of politics now began, "Thou shalt not talk honestly to the American people about sacrifice."

But there are hints that the American people are more sophisticated about the trade-offs over global warming and energy independence than the political handlers might believe. The recent ABC News poll found that a startling 71 percent of voters say that they are trying to personally reduce their "carbon footprint." Granted, some respondents may have felt that this was the feel-good right answer, but still it suggests that Americans may indeed be willing to respond to energy leadership from the next president about the hard choices ahead. But any truth-telling will have to wait until after the election.