Our cupboard was bare

I had a master's degree. I had a job. But to feed my three children, I had to swallow my pride and go to a soup kitchen. 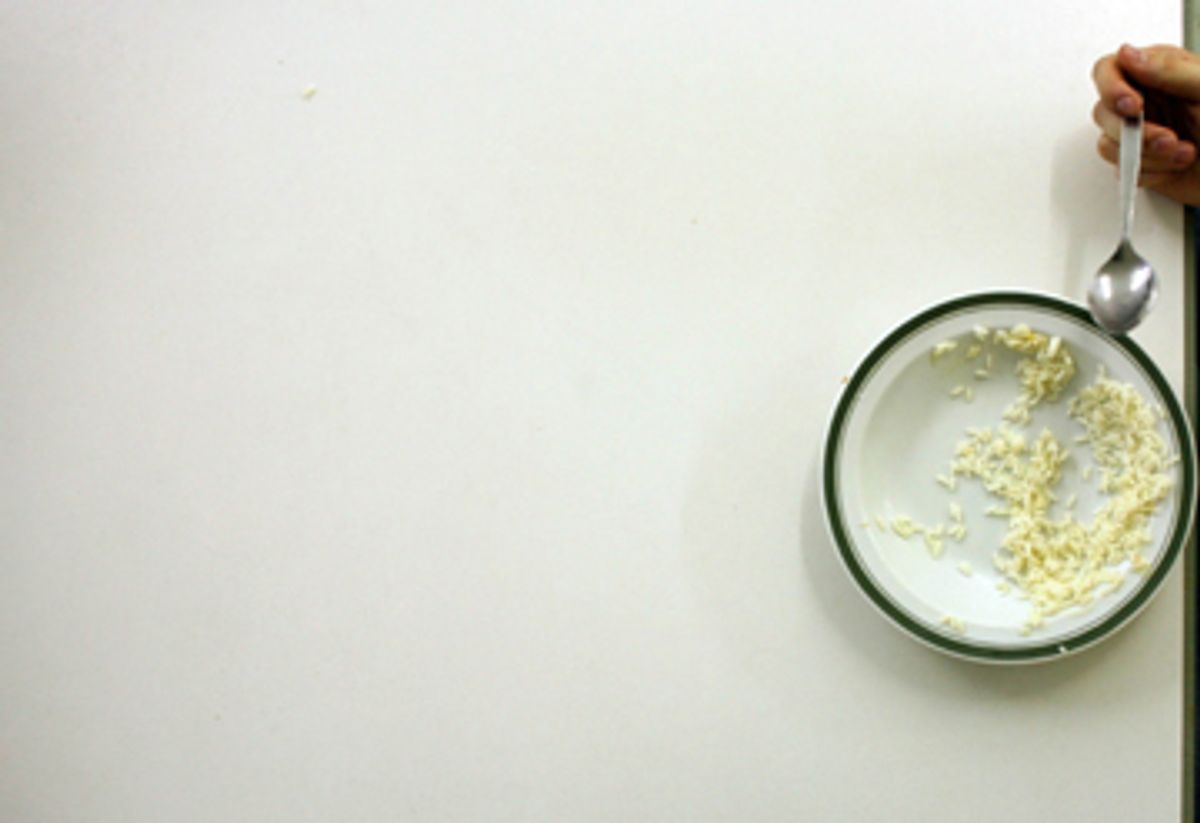 We only had to do it once last summer. Only once because when friends got wind of what was happening, they sent gift cards to Albertsons and Safeway, money even. I'm a writer, so I'm supposed to know how to say difficult things, how to blend the mundane with the significant, how to tell a story, how to make the sad at least bearable. I started e-mails in which I blathered on about my love for Mary Jane shoes, or my obsession with Neko Case, hoping to find a moment where I could say, "By the way. Last week? I took the kids to a soup kitchen." I wrote e-mails about Cuba and the welfare system and the crumbling middle class, yet none of them landed in an in box with the admission that I had taken my kids one Tuesday in July, drove downtown and walked into a soup kitchen to eat dinner -- parking far enough away so that no one would see we actually had a car.

A man with scarred skin was at the door. He wore a tiny gold hoop in his ear and as he talked to the older gentleman in front of us, he tugged the earring in a circle. When we were next, he smiled at the kids and asked their names. Chloe, the eldest at 9, mumbled hers, but Ivan and Giselle answered happily. At 7 and 5, they thought we were at some kind of special restaurant. I had told them we were going to a place called the Dining Room, and had said it was a "soup kitchen." I had even explained that we needed to go because we didn't have enough food to make it through the month. Only Chloe, though, knew what that meant.

The man pointed to the short line by the kitchen where workers in hairnets were dishing up food. He mentioned that he had some paperwork that I could complete later. He said "could," not "need to" or "will." It was a distinction I noticed.

The Dining Room in Eugene, Ore., used to be a restaurant, and it still looked the part: all green Naugahyde bench seats and scratched-laminate tables and a yellowed lamp hanging over each booth. It reminded me of the mom-and-pop place my dad used to take my brothers and me for root beer floats sometimes, except there was no jukebox, and the carpet was worn through in a few places. Tuesdays are family and senior night, which means you can eat there if you are under 18, have kids under 18 or are over 55.

Even still, Chloe, Ivan and Giselle were the only children there. Half the booths were taken, most of them with older people in clean and pressed clothes: nice slacks, plaid shirts. They looked like the kind of people you'd expect to see in Florida, or on a golf course. Later, after I sat down, I would notice the carefully sewn cuffs and hems, the knees of slacks worn shiny and thin. From far away, they all looked like people you'd see in a retirement center crocheting or playing shuffleboard.

It had been a hard decision for me to go in the first place. We had a house full of food, mostly from the food bank, and some staples friends who were moving had given us. I was employed as a secretary for the county, a job that didn't make use of my graduate degree or my intelligence but had let me keep the kids in the same school and city after my divorce. I made a decent wage. I had health insurance and dental insurance. On my desk was a packet of new retirement and savings options. But summer child care was $1,800 a month for my three kids, and the child support I received from their father was a paltry sum mandated by the state. It didn't even begin to cover the cost of one kid's child care for a single summer month. We didn't qualify for WIC vouchers or food stamps. The previous week, I had swallowed my pride and driven my old Subaru to a local food bank. The women there were kind and gave me a box filled with cans of tuna and bags of pasta. I was only allowed to get one box per month, though, and what they gave me would last a week, maybe 10 days. I was looking into weeks of hunger. The Dining Room served dinner to families only twice a week.

When I did the math, when I balanced all of my knowledge of the system and its ins and outs, I knew we had to go there and eat. Otherwise, we'd end up with a sack of soft potatoes in the final week before the next food box became available. It was the most responsible decision I could have made under the circumstances.

Even now, a year later, I'm still struggling to believe that last sentence.

So there we were, in line, Chloe standing apart from us, arms folded. Giselle and Ivan, however, talked to everyone, asked questions about what we would eat, where we would sit. When we got to the front, we each took a cafeteria tray. Chloe went first, and when a woman asked her if she wanted salad, she glared at me before answering. We all moved down the line, choosing from the selections: fresh fruit, salad, turkey casserole, fried fish, rice, beans, salsa, bread. One of the workers saw the kids come through and went into the kitchen. A moment later, she emerged with a jug of chocolate milk and set it on the counter. Women and men smiled at us, asked us "How much?" and said "Tell me when," then pointed us toward the tables. Along another counter, there was coffee and tea and juice, desserts even, day-old things from bakeries in town, each of them laid carefully on paper plates. Near one door was a pile of day-old loaves of bread and a heap of men's clothes -- all flannels and thermals. People took what they needed from each as they came and went. When we left, the bread and clothes would be gone.

We sat at a booth, and a teenager in an apron brought us silverware wrapped in napkins. The guy with the earring brought the paperwork, and handed it to me as the kids began to eat. It asked for family information: ages of children, number of adults, total income. I cringed when I wrote in my gross salary, but when I gave the form back, the guy just nodded. He looked about to say something, but didn't, so I asked him if I made too much.

He shook his head. "We don't take the information for that," he said. "But you'd be surprised about the people who come in here. Lots of them are like you."

The food was decent, a bit better than run-of-the-mill cafeteria food, and healthier. I could tell that whoever made the food had thought about it carefully, had tried to make it nutritious, hearty. One man, one of the few who looked truly homeless, came through the line, then sat in a corner. His tray was piled with food, enough for three meals. He ate methodically, slowly. He finished it all before we left.

Other people filtered in, and a few had children. I watched these children. At first I thought they were angry and sullen, like Chloe was. But they stood quietly next to their mothers, and they were polite and kind, much unlike Chloe, who was flicking bits of stringy turkey at her siblings. It wasn't until Ivan and Giselle saw the other kids and got up to talk to them, and I saw those kids flinch, that it began to make sense. Ivan and Giselle were acting like being here was no big deal because they hadn't grown up with this, and they hadn't a clue what it meant to be at a soup kitchen. They didn't feel ashamed of anything. So they asked questions of everyone, wondered aloud about how the serving dishes kept the food warm, and why there were single desserts instead of the served kind, and where the bathroom was. Even Chloe's sullenness was better than what I saw in those other kids, which was an acceptance of the situation and all it implied, all we load it with, all I loaded it with, despite my liberal proclamations, my lovely words and rhetoric argued in college classrooms, where I could turn a pretty phrase and win an argument about classism or poverty. I had grown up "poor," whatever that means, and hungry sometimes, too. But I had never been to a soup kitchen, didn't have a clue what it looked like, what it felt like, and I'm sorry now that I had pretended to know and that I had made use of something I had no right to use.

I could segue into some political rant here, a slick dismissal of the Bush administration, perhaps, or a paragraph declaring my support for Barack Obama. But the moment I walked into the soup kitchen -- the moment I acknowledged, publicly, that I could not provide food for myself or my children (which is why the soup kitchen is so much more difficult than the food bank) -- is the moment that my ability to believe in the politics of this country was forever altered. I know why poor people have historically low voter-turnout rates. If you vote, you acknowledge that you believe in the system. And to believe in the system when you're at the very bottom, when you've watched the chrome and ink-black SUVs drive by while you're packing your own beater with dried beans and lentils, to believe at that point is fucking painful. You either say the system works and you've earned your place, or you concede that there is something wrong and there might not be any way to fix it. The entire summer of 2007, as I struggled to keep us fed, I hated thinking of politics, an unusual characteristic for me. It hurt to listen to any presidential candidate talk about the working poor, and not because they weren't genuine, but because all their talk was just that -- talk. It was like listening to my former self, the one who didn't know how bad things could get.

A few months out of the crisis, and with a little money in my pocket, I bought a $3 wedge of brie. This is laughable, I know. I'm a goddamn parody of myself, with all my bougie aspirations and affectations. But when I unwrapped the cheese at home, I remembered suddenly the soup kitchen: the thick smell of beans and onions, the hard light coming through the naked windows, Ivan taking a bite of day-old Danish and spitting it out because he was used to better. I had to fight the urge to return the brie. It felt wasteful and indulgent. When I did eat it, I thought about all the things food means to us, all the things it stands in for. We may joke about brie, or expensive wine, or organic tomatoes, but food reminds us of who we are, who we're supposed to be. Brie says, I'm not poor and I'm well educated and I'm responsible, a good mother. I will never be hungry. We try to believe all these things don't matter, but it's like closing your eyes and believing no one can see you.

Heather Ryan is a freelance writer working on a memoir about traveling through the U.S. with her three children. She also teaches writing.