Their overheated, U.S.-obsessed reaction to Monday night's uneven-bars final made America look like a banana republic. 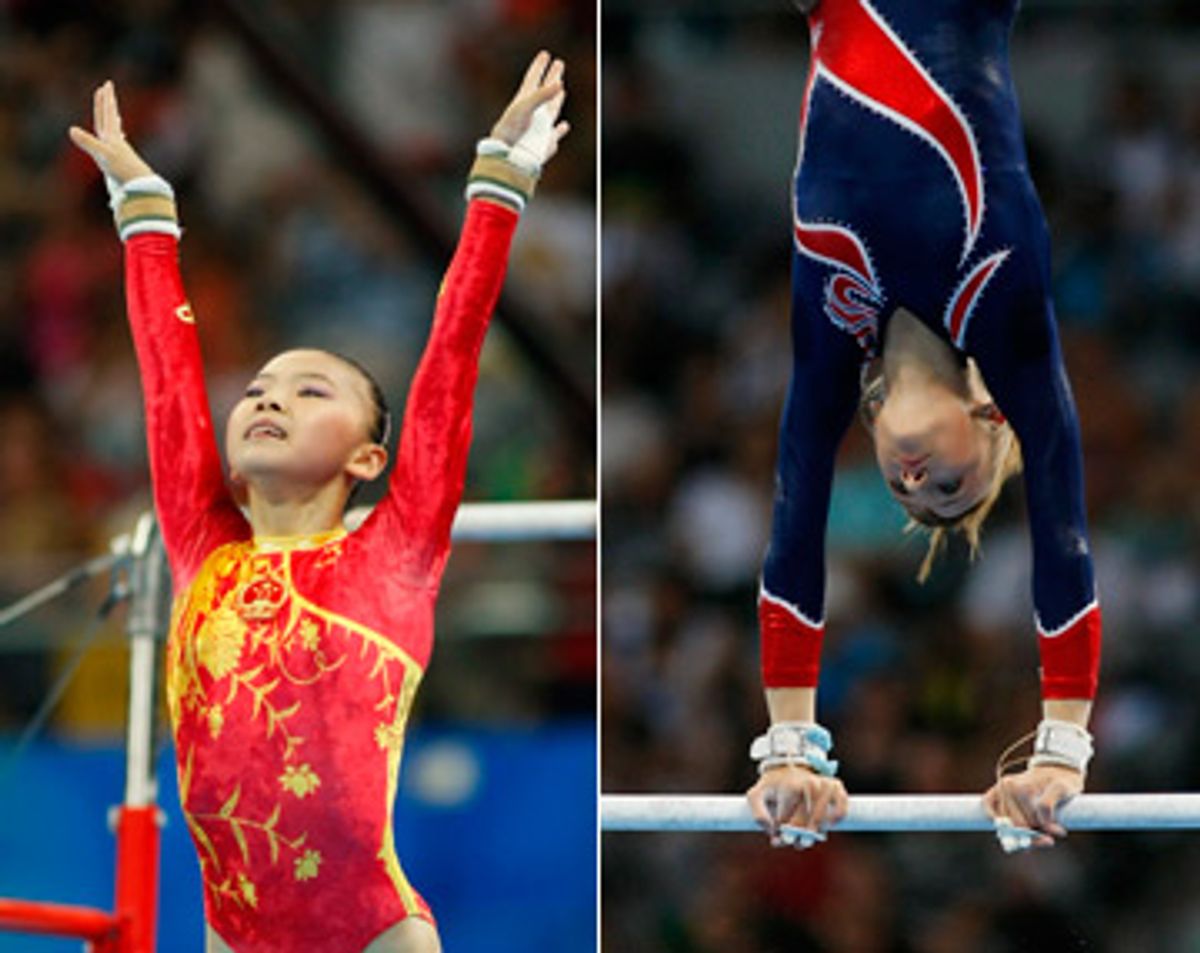 He Kexin of China (left) and Nastia Liukin of the U.S. compete in the women's uneven bars final during the artistic gymnastics competition at the Beijing 2008 Olympic Games August 18, 2008.

Can someone tell NBC to tone down its burning need to celebrate all things bright and U.S.-iful? I've put up with its homerism until now, but I've had it. The way it waves the flag makes me feel like I'm a citizen of a banana republic, in which everything about the Motherland is Great and Glorious except the plumbing. To paraphrase Humphrey Bogart's immortal line in "The Maltese Falcon," "The cheaper the country, the gaudier the patriotic patter."

The straw that broke the hump of my patriotic dromedary was NBC's coverage of Monday night's gymnastics showdown between Nastia Liukin and He Kexin on the uneven bars. I'm not an expert in gymnastics, but I've watched enough to know when two routines are extremely close. And that was emphatically the case with He and Liukin. He, who stands 4 feet 8 inches and weighs about as much as an extra-large sack of potatoes, was faster, quicker and tighter in her execution than Liukin. Liukin, 5-foot-3 with long legs, was more flowing and had longer, prettier lines. He had amazing releases; Liukin performed gorgeous pirouettes. It was like the difference between playing a note staccato and playing it legato -- strictly a matter of taste. Liukin stuck her landing but didn't have the greatest form on the way down. He took a side step on her dismount. Both made a couple of other minor mistakes. In a word, close.

The first time I watched the two routines, I thought He was better. The second time, I thought Liukin might be better. The third time, I threw up my hands. The point is, it certainly wasn't obvious. This isn't just my dumb opinion, either -- our resident gymnastics expert, Jennifer Sey, agreed. It was a squeaker, and it's a subjectively judged event. Which means, if you're a commentator, accept the decision graciously and shut up.

To listen to the overheated, reflexively pro-American NBC team, though, you'd think we were watching that scene in "Casablanca" when a croupier hands Captain Renault a wad of cash with the words "Your winnings, sir." No sooner had Liukin received her score -- the same 16.725 that He was awarded -- than NBC's expert commentator Tim Daggett said, "I think they dropped the ball on this one." Working himself up, he later called the decision "crazy." NBC's other expert commentator, Elfi Schlegel, jumped on the "we wuz robbed" bandwagon, saying, "Absolutely, Tim. That routine was spectacular. One slight flaw but minuscule compared to what He did."

And the agonizing and wringing of hands got worse after He was awarded the gold because of an arcane -- and absurd -- tie-breaking rule. As the camera zoomed in on Liukin, long after she had figured out the tiebreaker had been applied, bombastic play-by-play man Al Trautwig emoted, thumb-on-scales empathy oozing from every phoneme, "Nastia just wants to know what the heck is going on."

After the final competitor performed, He immediately knew she had won. There was no controversy -- the tiebreaker had already been applied. So, as winners usually do at this time, she got up, beaming, and waved to the crowd. But NBC reacted as if there were still some possible other outcome that might reverse this cosmic travesty. "She already believes she's going to win," Trautwig said. "Yeah, they think it's over," someone else chimed in. Uh, perhaps they thought that because it was over.

But for NBC, it wasn't over. First, it brought in a reporter to deliver a gratuitous report on why the U.S. was not protesting the result. (Answer: It had no grounds!) Then it got so deep into its outrage-and-confusion theme that it missed the beginning of the medal ceremony. As the medal music began to play, instead of showing the three athletes on the podium, NBC showed Liukin's coach and father, Valeri Liukin, and team coach Martha Karolyi staring at a paper explaining the tiebreaker. NBC barely caught the introduction of Chinese bronze medalist Yang Yilin. It bordered on the disrespectful. And as the camera focused on Liukin during the medal ceremony, Trautwig launched into yet another profound psychological soliloquy, intoning that "at times like this you just have to remind yourself, I've won four Olympics gold medals here and I won the most cherished gold medal there is in this sport." Then he added portentously, "But boy, would things be different here if that hadn't happened."

The nadir of this overwrought episode came when Trautwig said, "Does He Kexin really think she won the gold?" At least Daggett had the good sense to say that she did. But the impression left was that Fort Knox had just been burgled by Goldfinger and James Bond was too busy with Pussy Galore to do anything about it.

Gymnastics judging controversies are as common as group hugs on every point in volleyball. There are enough real travesties in this sport that the commentators don't need to go out of their way to create them. I accept that the NBC experts sincerely believed Liukin was better. (Trautwig doesn't pretend to know what he's talking about, so his comments fall into a different category, the kind you use to inflate dirigibles.) I also accept that they're paid to express their opinions. But in a sport that's judged like this one, when there's a close outcome, sometimes you just have to accept it. Daggett claimed that the fact that Liukin was American didn't affect his views, and maybe that's true. But the U.S.-centric tilt of the whole telecast was unmistakable -- and the problem goes beyond gymnastics. If NBC could take the red, white and blue filter off everything, we could see the Olympics a lot more clearly.