The fall of Bush's man in Pakistan

Despite Pervez Musharraf's despotism and double-dealing with U.S. enemies, George W. Bush, John McCain and the GOP embraced him to the bitter end. 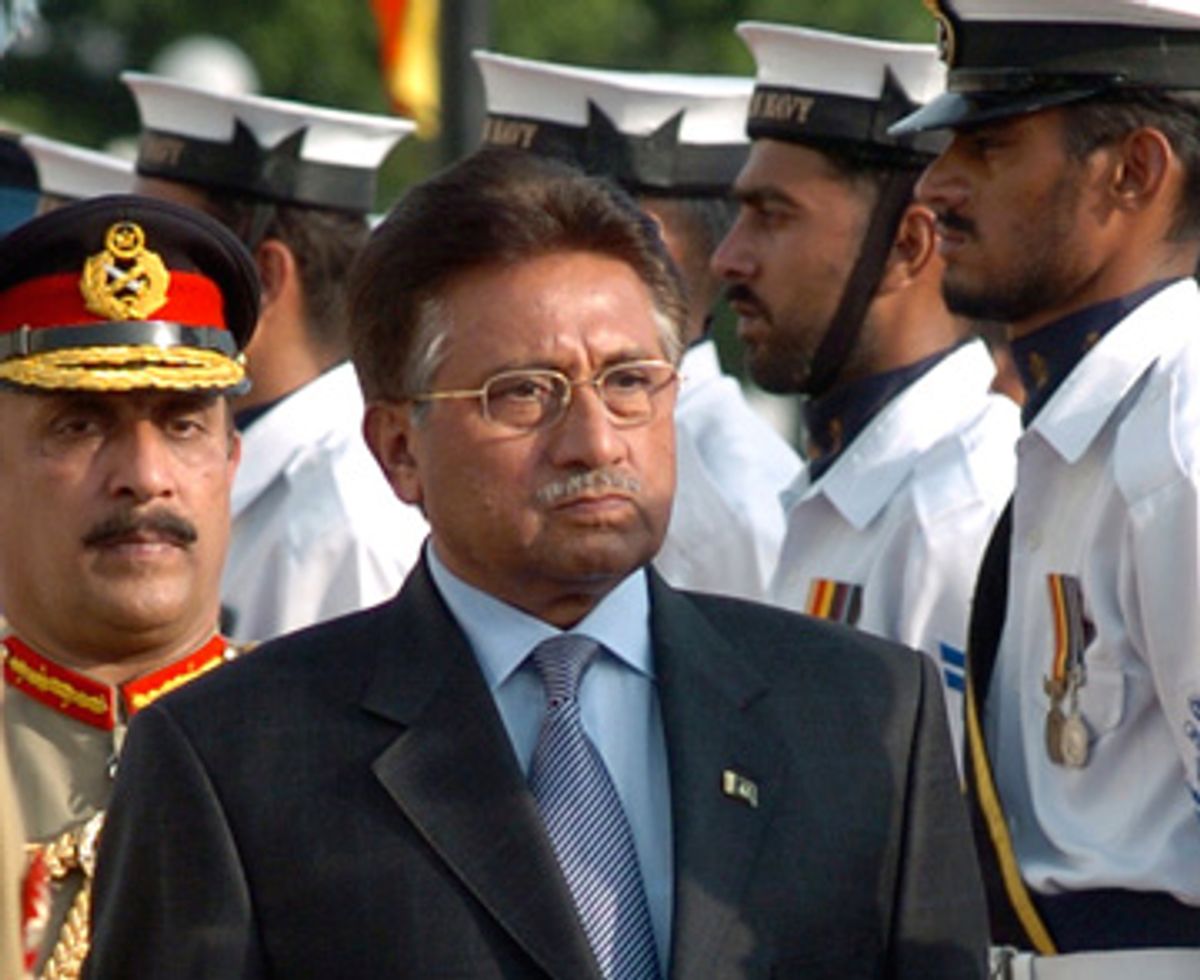 It is a measure of the Bush administration's broken foreign policy that the departure of Pervez Musharraf, the corrupt, longtime military dictator of Pakistan, is provoking fears in Washington of "instability." Despite Bush's warm embrace, Musharraf gutted the rule of law in Pakistan over the previous year and a half, including sacking its Supreme Court. He attempted to do away with press freedom, failed to provide security for campaigning politicians and strove to postpone elections indefinitely.

The Bush administration has made a regular practice of undermining democracy in places where local politics don't play out to its liking, and in that, at least, Musharraf was a true partner. But stability derives not from a tyrannical brake on popular aspirations; it derives from the free play of the political process. Musharraf's resignation from office, in fact, marks Pakistan's first chance for a decent political future since 1977.

Musharraf as a general had been known in the 1990s as a hawk, foolhardy in his provocation of India and deeply wedded to supporting the Taliban (and implicitly al-Qaida) in Afghanistan. Unlike some of his colleagues, there was nothing ideological about his belligerence. Brought up in part in secular Turkey as the son of a diplomat, he displayed no interest in fundamentalist Islam. His was the belligerence of opportunism and ambition.

Musharraf deposed then Prime Minister Nawaz Sharif in October of 1999. As army chief of staff, he had earlier that year launched the disastrous Kargil War against India in the Himalayan area of Kashmir, and been forced to withdraw. The encroachment on Indian-held territory had not been cleared with the prime minister, who was all too happy to yield to American entreaties to withdraw. Musharraf might well have been brought up on charges over the catastrophe, but he decided to overthrow the civilian government instead.

George W. Bush has been a staunch supporter of Musharraf. When campaigning for president in the fall of 1999, Bush praised Musharraf's coup as promising stability for Pakistan. Sen. John McCain also supported the coup, and has recently dismissed the civilian government of the 1990s as a "failed state." It is true that Sharif had begun exhibiting dictatorial tendencies before his ouster, but that is not a failed state, it is tyranny. How civilian authoritarianism could have been cured by military dictatorship remains unclear.

Pakistan was founded in 1947 by Muhammad Ali Jinnah and other leaders of the Muslim League as a refuge for the Muslims of British India. Jinnah fulminated against theocracy and fully expected Hindus and Sikhs to constitute a plurality of the new state's population. He thought of it as a state for Muslims, not as an Islamic state, and simply wanted to save South Asian Muslims from laboring under a Hindu majority in India.

But Pakistan did not become the enlightened, parliamentary democracy with guaranteed constitutional rights that its founder, a Shiite trained in British law in London, had envisaged. It constituted the most rural and least industrialized parts of British India. It never implemented proper land reform, ensuring the survival of a corrupt and imperious class of large landlords who are not exactly clamoring for their peasants to become literate and politically aware. Its social indicators, whether literacy, health or urbanization, remained disappointing. A small fundamentalist movement, the Jama'at-i Islami, came to have influence all out of proportion to its membership, despite its general inability to garner more than 3 percent of the vote in most elections.

The military was the most ambitious bureaucracy inherited from British India, and it made its first coup in 1958. After a return to civilian rule in 1971, the military under Gen. Zia ul-Haq struck again in 1977, hanging Prime Minister Zulfikar Ali Bhutto in 1979. Gen. Zia was viewed by the Reagan administration as indispensable to its covert war against the Soviet occupation of Afghanistan. Zia, isolated and without popular support inside Pakistan, made an alliance with the fundamentalist Jama'at-i Islami and began the "Islamization" of Pakistani law, which had earlier been a mixture of British legal principles with precedents derived from Muslim customary practice.

Zia's Inter-Services Intelligence, the feared military intelligence branch, received some $5 billion from Reagan and a matching sum from King Fahd in Saudi Arabia to fight the Soviets, and the ISI funneled much of that money to the most hard-line fundamentalist guerrillas among the Afghans. The Reagan-backed jihad against Moscow attracted the enthusiasms of Osama bin Laden, Ayman al-Zawahiri and thousands of other Arab volunteers, leading to the creation of al-Qaida.

Zia died in a mysterious plane crash in 1988, allowing a partial return to civilian rule. Bhutto's daughter, Benazir, won the elections to become the country's first female prime minister. But the military only let her take office after she pledged to cede Afghanistan policy to them, so that entire policy sectors remained under military control.

Gen. Zia had extensively and arbitrarily amended the constitution, giving the president enormous powers, including the authority to dismiss the prime minister. His successor dismissed Bhutto in 1990, allowing her rival, Nawaz Sharif, to come to power. In 1993, she swept back to power in that year's parliamentary elections, but she was dismissed once more in 1996, again succeeded by Sharif, who was overthrown by the military in 1999. The military's continued control of much of government policy during that decade and the repeated intervention of the president or the chief of staff to overturn the results of popular elections stunted the growth of political parties and institutions such as the courts. Contrary to McCain's assertion, it was not the civilian parties that created a failed state but the generals who did it.

Musharraf ostensibly turned his back on his allies, the Taliban and their al-Qaida colleagues, after 9/11, acquiescing in Bush's demand that he join Washington in a global war on terror. Musharraf, who had long backed not only the Taliban but also jihadi groups inside Pakistan that the Pakistani military sent to hit Indian Kashmir, was the least likely poster child for counterterrorism imaginable. But Bush's propaganda machine painted him and the Pakistani military as anchors of stability -- after they had spent decades destabilizing Pakistan and Afghanistan and cynically deploying the most virulent forms of Muslim fundamentalism to fight India and Indian influence.

Musharraf was an embarrassment to the Bush administration once Bush began using a rhetoric of democratization. So Musharraf conveniently turned himself from mere military dictator into a "president" by the expediency of a referendum on April 30, 2002.

For a dictator, a referendum has the advantages that it does not require one to run against a rival candidate, and virtually any vote tally can be declared a victory. Musharraf held crooked parliamentary elections in fall 2002, interfering in the free campaigning of the left-of-center, secular-leaning Pakistan People's Party and the right-of-center, big landlord-dominated Muslim League (N), which had been led by Nawaz Sharif (hence the "N"). The party that did best was a pro-Musharraf, breakaway faction of the Muslim League, called "Q" for the "Great Leader," Qa'id-i A'zam, the honorific of Muhammad Ali Jinnah, the country's founder. It was essentially what it would be like if an American general led a coup, suppressing the Democrats and Republicans, and ruling through something he called the "George Washington Party."

After Musharraf rigged the elections against the popular parties, a coalition of fundamentalist parties saw unprecedented success, getting 17 percent of seats in the federal parliament and taking over two major provinces, the North-West Frontier Province and Baluchistan. Those provinces were preciscely where the remnants of the Taliban and al-Qaida who fled to Pakistan were hiding out. The Jama'at-i Islami and its partners in the Islamic Action Council (MMA) promptly denied that there was any such thing as al-Qaida. But some of the MMA leaders had trained, or even been Taliban.

So the man Bush had so eagerly enlisted for the war on terror, by his dictatorial tinkering with the electoral process, helped put pro-bin Laden Muslim fundamentalists in control of the very provinces where the fight against militancy and terrorism was most important. And in reality, Musharraf needed the jihadi militants too much for his struggle with India over Kashmir to thoroughly root them out.

Although the Pakistani security forces did capture more than 600 Arab al-Qaida fugitives in Pakistan, and did engage in sometimes hard fighting against tribal forces in the northwest allied to the Taliban or neo-Taliban groups, Washington's depiction of Musharraf as a critical ally in the war on terror was blatant propaganda. Elements of the ISI even went on cultivating and using Taliban elements based in Pakistan to assert control of southern Pakistan, a policy that had, in part, led to 9/11 in the first place. Musharraf either was unable to purge ISI of fundamentalist elements, or cynically continued to use them in his rivalry with Afghanistan President Hamid Karzai, who deeply dislikes and distrusts the general.

Musharraf's unwillingness or inability to root out fundamentalist extremism brought him into disrepute with middle-class Pakistanis, especially educated women, who feared the Talibanization of their own society. Musharraf's economic policies helped grow a large, literate, urban middle class that grew attached to free access to independent and foreign media, and depended for business and professional purposes on a rule of law.

When Musharraf came into conflict with Supreme Court Chief Justice Iftikhar Muhammad Chaudhry in spring of 2007, he highhandedly dismissed him. Pakistan's middle classes, attorneys and other legal professionals staged continual protests and rallies. Musharraf was forced to reinstate Chaudhry in summer of 2007. But when he attempted to become an elected president that fall without resigning first as military chief of staff, the Supreme Court was set to rule against him. He therefore sacked the whole Supreme Court and packed it with yes men who allowed him to call himself president. He also imposed strict press censorship and excluded some independent channels from broadcasting over cable in Pakistan. This series of dictatorial actions, including interfering with free access to the media, caused Musharraf's popularity to plummet.

Musharraf's grip on power had clearly become too feeble for his main external backers, the Bush administration and the Saudi royal family, to trust him to continue to ride the tiger of popular discontent. He had to resign his military commission to remain believable as a civilian president. After Benazir Bhutto was assassinated on Dec. 27, 2007, while campaigning for prime minister, he was forced to hold credible parliamentary elections. The Pakistani public dealt a crushing rebuff to Musharraf last February, turning the country over to Benazir's PPP and to Sharif's Muslim League. The two major, long-standing parties made a political alliance and began planning for Musharraf's impeachment, spurred on by the lawyers and popular activists. It was over for Musharraf by last February.

Pakistan's middle classes have spoken. They want a return to civilian rule and a reestablishment of the rule of law. They are skeptical that the corrupt and imperious establishment political parties can deliver to them the better life to which they aspire for themselves and their children. Given the chance, they gave the biggest number of seats in parliament to a left of center, secular-tinged party, the PPP. The Pakistani people have given the lie to the stereotype often visited upon them, that a majority are religious fanatics and are incapable of participating in an open democracy.

The Pakistani military and its tacit alliance with militant fundamentalists has in fact caused most of the country's problems. If the U.S. and Europe are wise, they will give the elected prime minister their full support and pump in aid to help ensure that democracy in Pakistan, still an embryo, actually has a fighting chance.