Are Israeli politicians increasingly beholden to conservative Americans who lavish them with financial support and political pressure? 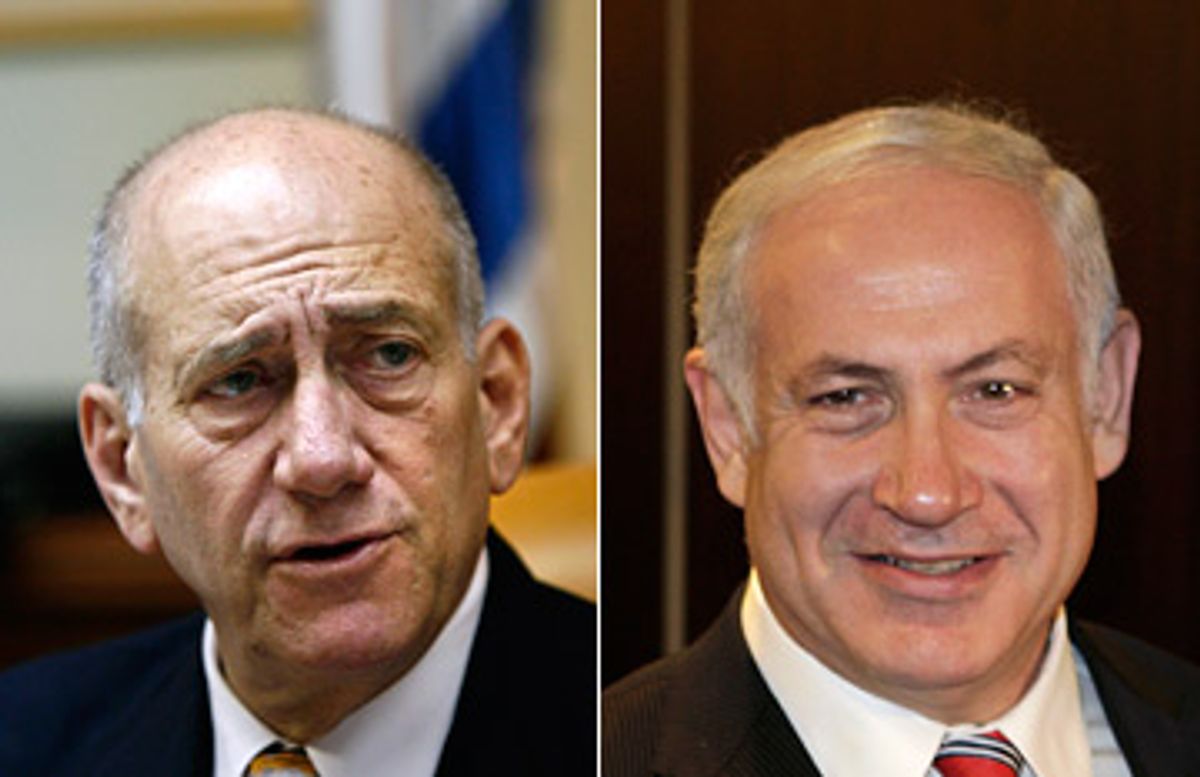 American voters are not alone in soon facing a crucial leadership decision. In Israel, corruption allegations are sweeping Prime Minister Ehud Olmert out of office, and next month the incumbent Kadima Party will hold a primary, with a general election likely to follow close behind. With closed-door negotiations under way with the Palestinian Authority, and tensions rising with Iran, the new Israeli government will be stepping in at a sensitive time, and its decisions will have serious repercussions for the country's future.

Israeli citizens, then, may be facing a crucial election. But they aren't the only ones determining who will lead them next.

Much ink has been spilled about the deep influence of Israel lobbyists in U.S. politics, but largely overlooked is that the relationship is a two-way street -- with American influence reaching into Jerusalem. In fact, the Israeli political world is increasingly weighed down by American dollars and pressure, particularly from conservative American Jews, Evangelical groups and other hawkish political operatives. That comes to the rising dismay of some in Israel, and is potentially dangerous for both countries in terms of swaying politicians' actions and decisions.

One of the major causes of Olmert's downfall was his relationship with Morris Talansky, an American businessman. Talanksy claims that over the last 15 years, he has repeatedly given Olmert envelopes filled with cash, totaling over $150,000. There have been no concrete indications that Talansky received anything in return or influenced Israeli policy, and he has stated that his financial support for Olmert was based on Olmert's past hard-line positions and Talansky's desire to help support them. Even if there was no personal benefit to Talansky, though, the scandal has raised questions about the role of American money in Israeli politics.

In general elections, direct foreign donations are prohibited. But in primaries, candidates rely heavily on American funds. According to the Washington Post, in the 2007 Likud primary, former Prime Minister Benjamin Netanyahu -- a hard-liner beloved by American conservatives -- received about 75 percent, or approximately $400,000 of his more than half-million dollar campaign war chest, from American contributors. (The scope of campaign funds is much smaller in Israel than in the U.S.) Israeli donors contributed only 5 percent. Although Netanyahu provides the starkest example of Israeli politicians relying on American supporters, he is not alone. Labor Party leader Ehud Barak, for example, received approximately $200,000 of his primary funds in 2007 from U.S. backers, about a third of his total haul.

This year, Shaul Mofaz -- a top contender to lead Kadima next -- is also actively seeking financial support from abroad, according to David Kimche, a member of the advisory council at the Israel Policy Forum. Mofaz has also hired George Birnbaum, the Israeli partner of Arthur Finkelstein, a high-powered American campaign strategist and former advisor to Ronald Reagan and Richard Nixon.

Kimche, who served as director general of the Israeli Foreign Ministry and deputy director of the Mossad, recently told me that he believes these donations do not come without a price. "I wouldn't say there are strings attached directly," he said, "but I certainly believe strings are attached indirectly. People who receive the envelopes are beholden to those who give the envelopes."

To be sure, Israeli politics is by no means an extension of the American political scene. With its many parties and its parliamentary model, the Israeli electoral system is almost hyper-democratic, one in which politics is far more of a blood sport than American politics ever could be. It is constantly rolling with the tides of public opinion in a way that often makes it difficult to govern at all without the fear of quickly losing office. In the end, it is the Israeli electorate, of course, that will have the biggest say in who will lead it. Still, Israelis clearly aren't alone in making that decision.

In the past few months, Haaretz, Israel's paper of record, has run a series of articles expressing misgivings about outside influence. In one of them, political scientist Shlomo Avineri wrote, "The voting public has the right -- the sovereign right -- to guarantee that rich foreigners, however well-meaning, whether from New York, London, Los Angeles or Melbourne, will not be partners in our democratic process because of their money."

The involvement of foreigners in Israel's democracy, however, does not end with fundraising -- some are getting involved on more substantive levels, including active lobbying. As I wrote about in Salon in December, a coalition of American organizations formed last fall to oppose any division of Jerusalem, even if such an agreement to share control of the city with the Palestinians is called for by the democratically elected Israeli government. At the time, one of the coalition's supporters, American casino magnate and multibillionaire Sheldon Adelson said, "If someone is going to jump off a bridge, it is incumbent upon their friends to dissuade them."

Adelson, reportedly the third richest person in the United States and a big-time donor to the Republican Party, has gone further in entangling himself in Israeli politics. A hawkish and enthusiastic supporter of Netanyahu's, and an opponent of Ehud Olmert, Adelson has used his energy and considerable pocketbook to try to ensure that Netanyahu is elected. Among his endeavors, he launched a daily newspaper called Israel Hayom, which quickly has become the second most widely read paper in the country. As a free paper, it is not a moneymaking venture; instead, it is widely regarded as a vehicle for attacking Olmert's administration with the aim of propelling Netanyahu into office.

If the paper is seen as contributing to Netanyahu's successful reelection, it is natural to assume that Netanyahu would take into account the political desires of his wealthy overseas benefactor -- even if they do not align with those of the Israeli electorate.

"Bibi is beholden to those people who are helping him," David Kimche told me, referring to Netanyahu by his popular nickname. "He will think twice about endangering the support he's getting from Adelson."

The fact that the majority of such influence comes from the American political right is worrisome for the Israeli left and those who are sympathetic to the Israeli peace camp. Hawkish American supporters of Israel are quick both to open their wallets and to let their voices be heard, while more dovish ones tend to occupy themselves with a variety of different causes and don't often get as deeply enmeshed in the volatile Middle East.

"American Jews who hold the more conservative views toward Israel are also the ones who tend to be most actively engaged with Israel," Jeremy Ben-Ami, executive director of J-Street, a new, dovish Israel lobbying group, told the Washington Post recently. "Liberal American Jews tend not to single out Israel as the focus of their philanthropy."

What this means is that to the extent that Israeli politics is being affected by Americans, that influence is coming mostly from those who lean toward right-wing policies.

When I brought this up with Shmuel Rosner, Haaretz's chief U.S. correspondent, who follows Israeli-Diaspora relations closely, he told me that, despite ambivalence about American influence on Israeli politics, he does not expect its role in the electoral process to dissipate. "Israelis who lose in the elections do not like the fact that foreigners support the winning side," he said. "But I don't think this will become an issue to the extent that it will make politicians more reluctant to get such support."

In the end, Rosner added, winning power seems to trump all other concerns. "In opinion polls one can clearly see that the Israelis who do not want American meddling are those who do not benefit from it."