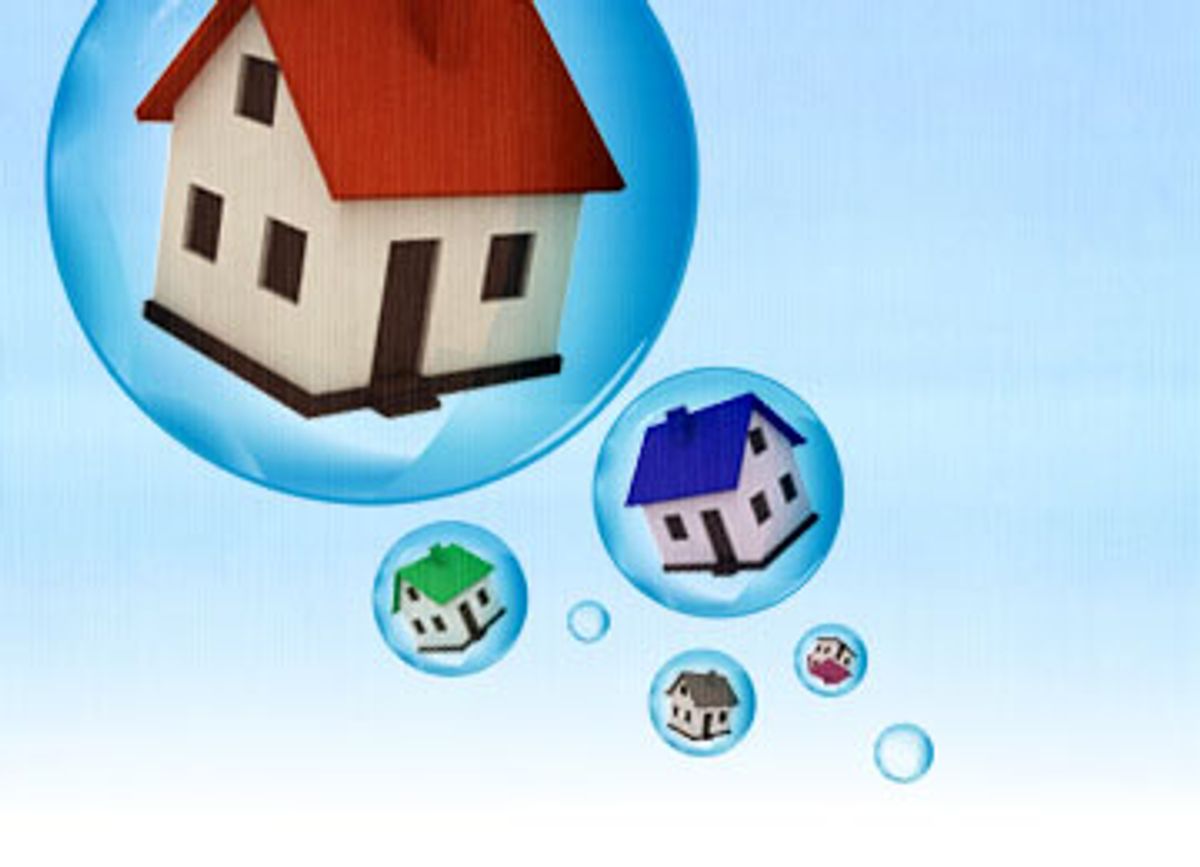 The nearly universal -- but utterly mistaken -- belief that housing prices would keep going up, up and up was the all-important catalyst, argues Robert Shiller in "The Subprime Solution: How Today's Global Financial Crisis Happened, and What to Do About It," for the Great American Housing Boom of the early 21st century. Homebuyers, mortgage lenders, bankers, credit rating agencies, investors and government regulators all bought into the dream. So buyers agreed to mortgages they couldn't afford, lenders lent money that couldn't be paid back, bankers repackaged the bad loans into fancy securities, credit rating agencies gave the securities high ratings, investors gobbled them up, and government looked the other way.

It's a simple story, but then the United States is, in some respects, a very simple nation. We really, really love our bubbles -- especially when they involve get-rich-quick land schemes. Shiller quotes, to great effect, the opening line of historian Aaron Sakolski's 1932 book "The Great American Land Bubble: The Amazing Story of Land-Grabbing, Speculations, and Booms From Colonial Days to the Present Time":

"America, from its inception, was a speculation."

We are speculators. That's what we do. Therefore, declares Shiller, "the most important single element to be reckoned with in understanding" the housing debacle "is the social contagion of boom thinking." "The ultimate cause of the global financial crisis is the psychology of the real estate bubble."

Robert Shiller is someone who should be taken seriously when attempting to understand the intersection of economic bubbles and the real estate market. A professor of economics at Yale University, Shiller earned worldwide renown by identifying the stock market boom of the late '90s as a bubble doomed to pop in his book "Irrational Exuberance," originally published in March 2000 at the absolute peak of the market. He is also the co-creator of the Case-Shiller Home Price Index, currently deemed one of the most authoritative measures of housing price trends. He was one of a handful voices who declared that the housing boom of the early 21st century was utterly out of whack with historical pricing data, and he predicted a devastating bust. Right again!

"The Subprime Solution," however, is nowhere near as satisfying, or compelling, as "Irrational Exuberance." Because the story isn't really that simple. There's more to this mess than just "psychology."

In accordance with the first half of the title, "The Subprime Solution" is more concerned with prescribing a sheaf of fixes to America's bubble mentality than exploring exactly how we got here. The unifying principle behind most of Shiller's suggestions is the aim of helping Americans better understand economic affairs, in order to prevent them from making so many dumb decisions. The best means for combating social contagion, then, is better access to good financial information.

There's some sound stuff here. Shiller believes the federal government should subsidize financial advice for low-income taxpayers, require more financial disclosure, and create a new financial watchdog that would review the quality of financial products in a fashion similar to the Consumer Product Safety Commission. The government should also get involved, he suggests, in regulating the boilerplate language of mortgage contracts, so that consumers don't have to take on faith that all that mumbo jumbo isn't just a scam cooked up by mortgage lenders. He even proposes a new system of economic measurement that would embed inflation into the price of goods. If such a system had been in place, Shiller suggests, Americans would realize that the common perception that housing values always rise is generally not supported by the facts.

More provocatively, Shiller also proposes taking advantage of innovations in financial technology to create new derivative markets that would "tame speculative bubbles in real estate." This "liquid market in real estate futures" would allow investors to sell real estate short if they believed that the market was in a bubble.

... then any skeptic anywhere in the world could, through his or her actions in the marketplace, act to reduce a speculative bubble in a city, for such a bubble represents a profit opportunity for short sellers. If the market were widely watched, then home builders would see the projected price declines and scale back their own activities, thus averting huge construction booms such as the one we have recently witnessed in the United States.

Shiller's proposal is a lightning rod precisely because many observers have pinpointed innovative derivative markets as one of the causes of the subprime debacle. Yet Shiller proposes a package of new, state-of-the-art financial products as part of the solution. Shiller, it should be noted, is not an entirely disinterested observer. As he notes, he has "been campaigning for innovative new markets for real estate for twenty years," and he applauds a big "breakthrough" that occurred in 2007 when the Chicago Mercantile Exchange created single-family home-price futures markets "using the S&P/Case-Shiller Home Price Indices that Karl Case and I initially developed."

Shiller could be right. Maybe the real estate market does need more liquidity. There are, without question, legitimate and valuable uses for futures markets and other derivative products that enable the hedging of risks by both producers and consumers of various commodities. But a crucial part of the subprime story and the consequent global financial credit crunch is the destructive role of innovative financial products dreamed up by Wall Street financial wizards. Wall Street's miraculous ability to repackage risky loans so that they appeared safe enough for investors all over the world to gobble up like hotcakes ended up creating a clear incentive for bankers and mortgage lenders to peddle even more misbegotten and financially absurd loans to anyone who asked for one.

The most astonishing, and troubling, flaw in "The Subprime Solution" is that Shiller spends virtually no time or energy whatsoever exploring this part of the story. In his introduction, Shiller notes:

Accounts of the crisis often seem instead to place the ultimate blame entirely on such factors as growing dishonesty among mortgage lenders; increasing greed among securitizers, hedge funds, and rating agencies; or the mistakes of former Federal Reserve chairman Alan Greenspan.

And that's it. There's very little follow-up on any of these sub-narratives, and literally zero explanation of how dodgy subprime loans were transformed into top-rated securities. Granted, none of those factors deserve sole credit for the "ultimate" blame -- but surely they bear some portion of it? Any decent account of "How Today's Global Financial Crisis Happened" requires addressing the culpability of Wall Street, if only to convincingly dismiss it.

But Shiller just doesn't appear to be interested, at all, in a close look at how Wall Street helped to fuel the subprime boom.

The unavoidable conclusion is that markets failed to work properly in the case of the real estate boom, and one reason why they failed is that the smartest financial operators in the world, motivated by greed and encouraged by a generation of government permissiveness, did some very, very stupid things. Shiller may be correct that part of the answer, going forward, is greater integration of futures markets into the bedrock activities of American economic life. But his argument would be stronger if it incorporated a more detailed analysis of Wall Street's infatuation with sliced-and-diced mortgage-backed securities.

It's not as if Shiller didn't have enough room. "The Subprime Solution" is a small and slender book. Not counting the index, it consists of 177 pages that feature wide margins and ample space between lines of print -- two notorious indicators that a publisher is trying to cash in quickly on a hot topic by fattening what should be a pamphlet into a full-fledged volume. Readers deserve better.

This post has been corrected since it was originally published.