Nothing would delight Republicans more than for the Clintons to upstage Barack Obama at the Democratic National Convention. 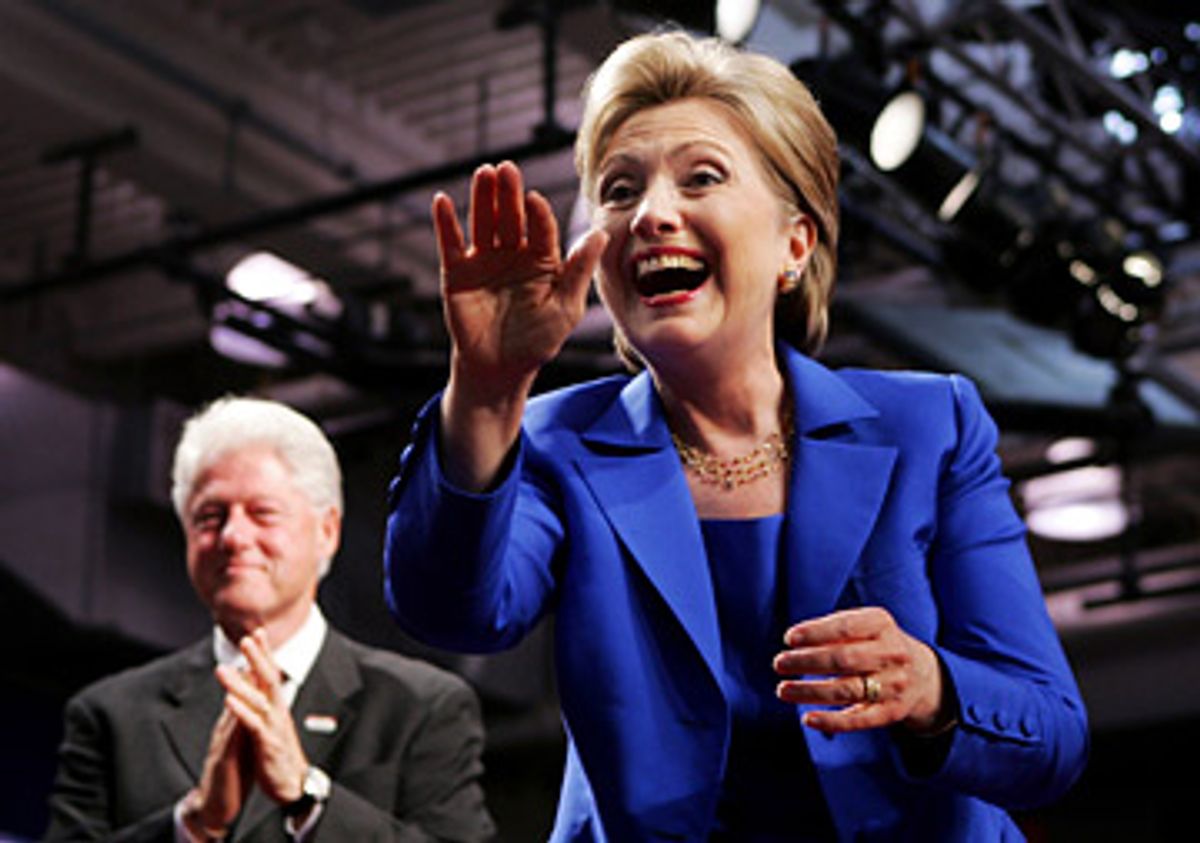 Bob Bennett, who has been chairman of the Ohio Republican Party for two decades, has a vision of what he wants to see on television at next week's Democratic National Convention: "When Hillary Clinton's name is placed in nomination, it will take over the emotional onus of the convention." The veteran party leader added with partisan anticipation in his voice, "I think the Clintons have already hijacked the convention -- and I can't wait to watch."

When leading Republicans who are not working on the fall presidential campaign were asked to sketch out the best possible scenario in Denver to boost John McCain, they kept uttering those fateful two words: "the Clintons." As GOP pollster John McLaughlin put it, "I'm rooting for the media's tendency to focus on how the Clintons have taken over Obama's convention." Republicans saw other potential pitfalls for Obama -- from delivering a vaporous acceptance speech to abandoning the safe center on policy issues -- but the conversations kept coming back to the woman who nearly won the nomination and the way she will play her hand in Denver.

The Republicans have a searing memory of how a single prime-time address by a losing presidential candidate can jeopardize the careful choreography of an entire convention: Pat Buchanan's defiant declaration of a "culture war" in 1992.

"What I hope happens is that there is a huge groundswell of support for Sen. Clinton," said Rich Galen, who was a senior advisor to Fred Thompson during the 2008 primaries. "Remember the George H.W. Bush convention in Houston that was hijacked by Pat Buchanan? Buchanan gave a speech that, as the late Molly Ivins wrote, 'sounded better in the original German.' And remember, Buchanan had nothing like Sen. Clinton's delegate support."

The political message in this situation would be the inherent weakness of Barack Obama. "The result would be that the Clintons ran the convention," Galen explained. "And it would look like Obama was only the nominee at the sufferance of the Clintons."

With Hillary Clinton being the featured Tuesday night attraction in Denver and Bill Clinton (plus the Hillary nomination speeches and roll call) on the docket for Wednesday night, the dethroned first couple of the Democratic Party will -- even if on good behavior -- cast an oversize shadow on Obama's ascension. Add a restive press corps eager for a hint of controversy to disrupt the no-news-here flow of a choreographed convention, and more than enough disgruntled Clinton delegates gleefully ready to log some TV air time, and you have all the necessary ingredients for combustion.

And make no mistake, Republicans are primed for it. As Chip Felkel, a South Carolina consultant who helped George W. Bush win that state in the 2000 primary, said with a laugh: "God forbid that Obama would pick [Kansas Gov. Kathleen] Sebelius for his vice-president. That would really rile up the Clintonistas."

The fault lines in the Democratic Party, which will be on display in Denver, are far more than a media concoction. A new NBC News/Wall Street Journal national poll found that Obama has won the support of only 52 percent of former Clinton backers, with 27 percent still undecided (or opting for minor-party candidates) and 22 percent saying that they prefer McCain. Facing this persuasion gap, Obama has to cater publicly to the Clintons, even at the risk of losing control of the convention story line between Michelle Obama's Monday night meet-my-husband address and the nominee's fireworks-over-a-football-field acceptance speech on Thursday night. But the obvious fear in the Obama camp is that Hillary Clinton's spotlighted appearance at the Pepsi Center will conjure up memories of the Democrats' own haunted past: when a defeated Ted Kennedy electrified the 1980 convention with his "the dream shall never die" speech that left incumbent President Jimmy Carter seething -- and seeming like an afterthought.

Not all Republicans believe it is realistic to imagine that Obama will lose emotional control of his own convention. Bill Lacy, a longtime Bob Dole strategist who was Fred Thompson's 2008 campaign manager, said about the Obama team, "I have to give these guys an enormous amount of credit. They've run the smartest campaign that I've seen in a long time. And they won't be doing anything stupid in Denver." Lacy agrees with the consensus that "the worst possible thing from a Democratic perspective would be a Clinton-Obama flap. But I don't think that will happen."

Each party has a somewhat caricatured vision of its political rivals. So it is no surprise that Republicans talk about the "angry left" with the same vehemence that Democrats use to describe the "religious right." Tom Rath, a New Hampshire Republican leader who was a prominent backer of Mitt Romney's, predicted that Obama would be in trouble "if there is an angry liberal tone to the convention that makes voters feel like the Democrats are out of step on the issues." McLaughlin, who was Fred Thompson's pollster, said, "I hope that they're overconfident and arrogant enough that they do state where they stand on issues: 'We want to raise taxes, we really want to the cut military, and we want to raise gas prices for the good of the environment.'"

Rath, though, was closer to the mark when he suggested that the true danger for Obama was not an excess of ideology but a flight from specificity. "What Obama has to worry about is an acceptance speech that will be well-delivered but empty of substance," he said. "That would play right into McCain's hands. That would solidify the impression that Obama has an engaging personality but there's nothing beneath it."

Republicans will, of course, be jaundiced observers of the mile-high doings in Denver. But it is intriguing that they see that the biggest challenge facing the Democrats lies in healing an internal breach that is based on personality, race and gender, rather than on issues. What ultimately matters, of course, is the verdict not of GOP insiders but of the voters -- to be measured in the near term, at least, by the polls that follow. Alluding to the traditional post-convention bounce, Lacy said, "The best that McCain can get out of Denver is not finding himself 12 points down."