Barack Obama's aides realize raising money on the anniversary of the terrorist attacks might be a bad idea -- too bad they'd already sent out the invitations. 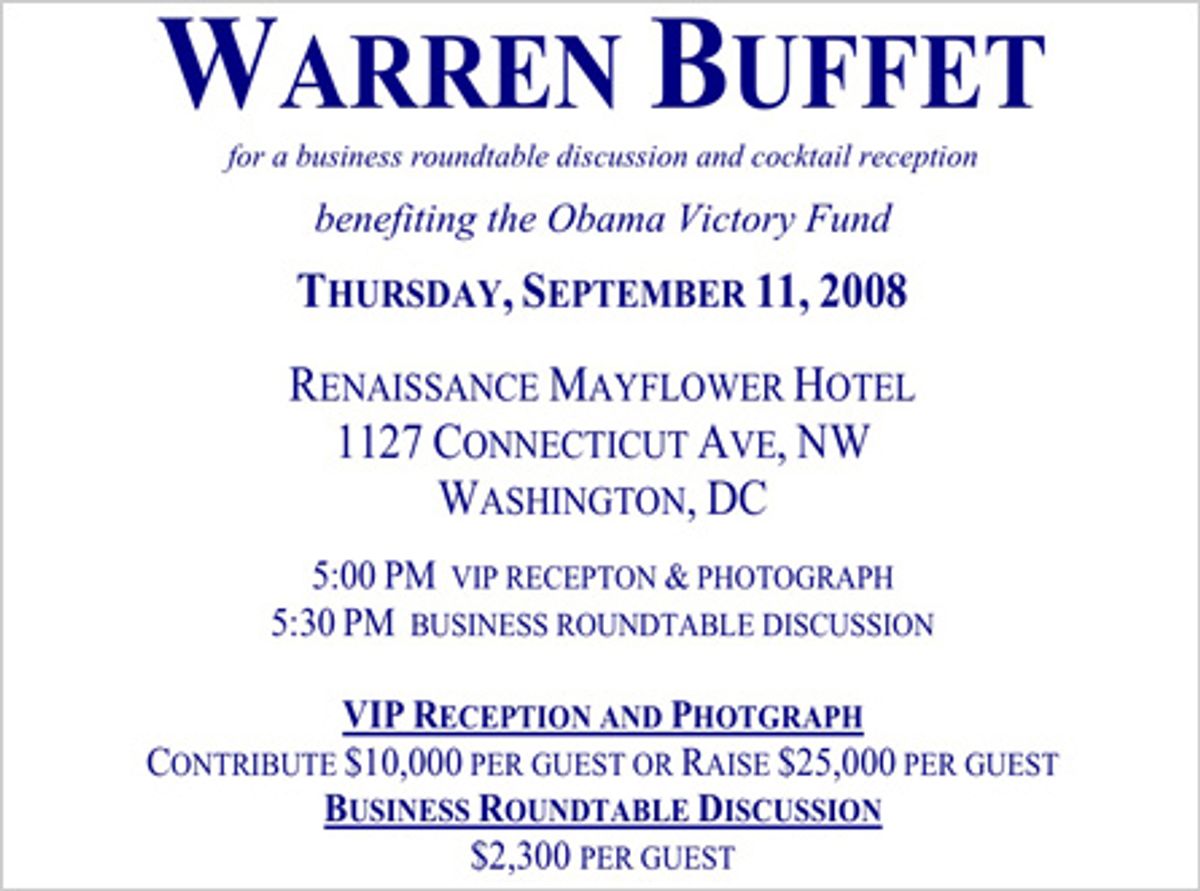 DENVER -- Apparently aides in Barack Obama's campaign realized scheduling a fundraiser on Sept. 11 was a bad idea and pulled the plug on a big event planned for that day in Washington. Unfortunately, that didn't dawn on them until they'd already sent out invitations and set up a Web site to take donations for it.

An official invitation obtained by Salon indicated that the event, in Washington's Mayflower Hotel, was going to feature billionaire Warren Buffett and benefit the Obama Victory Fund, a joint Obama-Democratic National Committee organization that will be helping to pay for the fall campaign. Attending a "business roundtable" with Buffett would have cost $2,300 per person; coming to a VIP reception beforehand would have required either a $10,000 contribution or raising $25,000. When Salon inquired about the event Monday, aides said it had been canceled already, though they couldn't say when that decision was made. Since the attacks, campaigning explicitly on Sept. 11 has been rare. Both Obama and John McCain are taking down negative ads on the day to mark the seventh anniversary of the terrorist attacks on New York and Washington; McCain says he plans to take his ads off TV altogether, and he'll head to New York for a community service day.

Of course, that's not to say the date hasn't been politicized. Republicans, in particular, haven't been shy about invoking "9/11" for political purposes (see exhibit A, "Giuliani, Rudy, short-lived but terrorism-obsessed presidential campaign of"). Obama wasn't planning to be at the Buffett event; maybe no one would have gotten worked up about a quiet meeting that had nothing to do with security and just happened to fall on Sept. 11. Theoretically, people might understand that it's a busy fall on the campaign circuit, and keeping a whole day -- no matter what the date is -- off-limits cramps scheduling decisions.

But you'd think by now Obama's aides might have realized that that's not really the way the world works. The Republican echo chamber wouldn't have let the event's timing slip past without notice. Officially, the GOP and McCain's campaign had nothing to say about the invitation, but right-wing blogs, talk radio and Republican surrogates -- not to mention Fox News -- wouldn't have stayed quiet. (And yes, by publishing the details, Salon is tipping them off about the event. But the invitation was already circulating among Democratic donors; it wasn't going to stay secret for long.)

Obama aides apparently decided the right-wing noise machine does a fine job of finding red meat to feast on already -- the last thing Obama needs is to start serving it up himself. Maybe next time the campaign will think of that before it sends the invitations out.