All signs are that Joe Biden won't back away from the job ahead of him -- combat with John McCain. 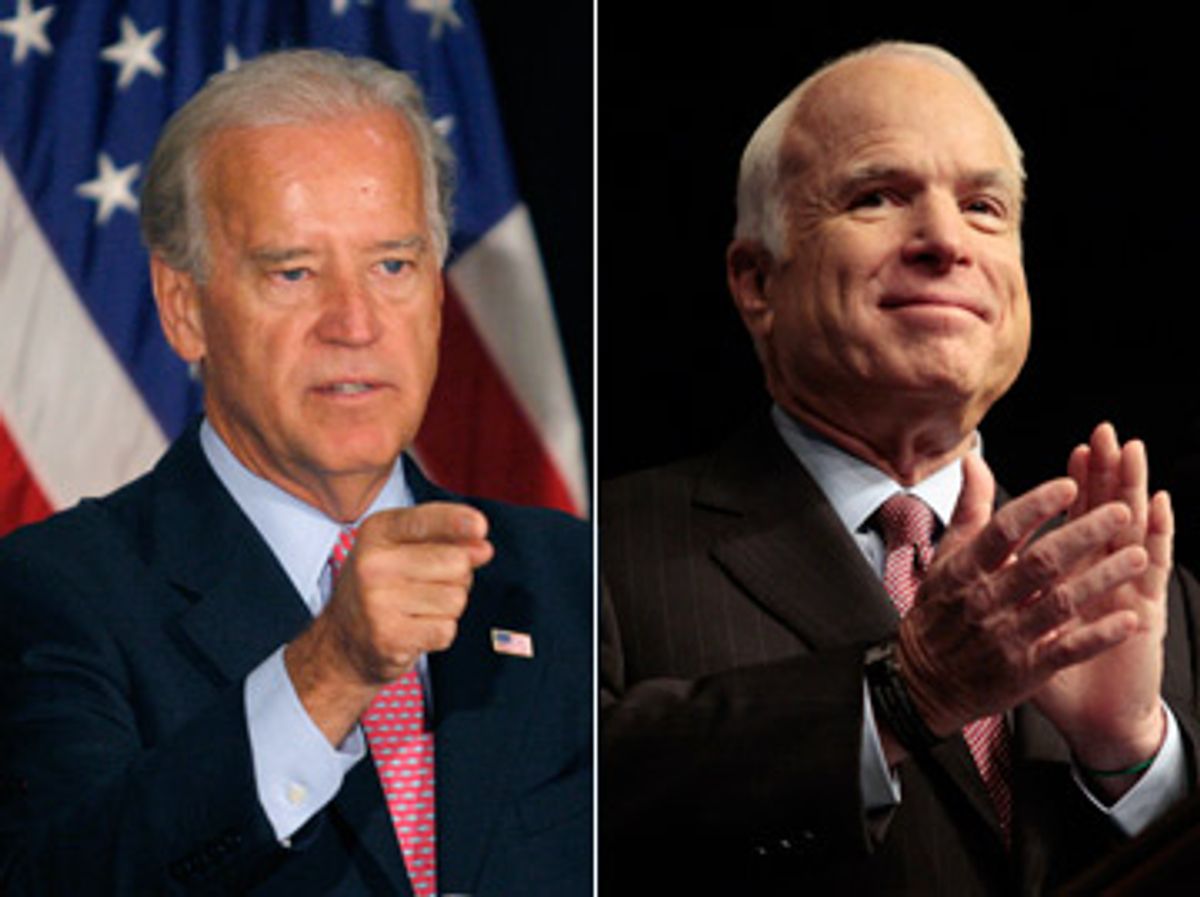 As he made his political rounds Tuesday, Joe Biden appeared moved (fighting back tears as he spoke to his home-state Delaware delegation) and awed ("This is the first time I've ever had security -- senators don't matter") by his newly elevated status.

Biden also took pains to wax ecstatic over Michelle Obama, saying as he shared a stage with her at a mid-morning women's economic event, "I heard last night the most remarkable speech I've heard in my life." Earlier he gushed to the Delawareans (a word that we will be seeing a lot more of), "When this convention is over -- and three and four years from now in the comments of why the Democrats won -- it will come back to the single most amazing event at the Democratic convention. It was Michelle Obama, not Barack Obama, not Bill Clinton, not Ted Kennedy."

Biden -- never a politician likely to be lost in the drapes -- may have been selling himself short. For all of Barack Obama's eloquence, for all of the quiet confidence of Michelle Obama, it may well be Biden's own star turn on Wednesday night that provides the mile-high lift to the Democratic prospects in November. Monday night was designed to portray the Obamas as the Brady Bunch and Tuesday night is slated to be dominated by Hillary and the Holdouts (sounds like a decent name for a country-and-western group). In contrast, Biden is the only big-name speaker whose primary mission is to pin the tail on John McCain.

As my colleague Mike Madden reported , Hillary Clinton will devote part of her prime-time moment to portraying McCain in ways designed to lure back wavering blue-collar Democrats. And Mark Warner, as Tuesday's keynote speaker, will certainly take some potshots at the Republicans. But the networks, admittedly egged on by the real-life frictions between the Obama and Clinton camps, have a single story line for tonight -- the elusive quest for Democratic Party unity. And in that Obama-vs.-the-Clintons narrative, John McCain is almost as irrelevant as Bob Dole.

All signs, including guidance from the Obama and Biden camps, suggest that the six-term Delaware senator will not back away from combat in the erroneous zone, portraying McCain as a good man who has fallen into bad company with conservative Republicans. At the women's economic forum, Biden brought the Supreme Court -- an issue that has gone AWOL in the campaign -- back into the Democratic political arsenal. As Biden put it, "Ladies and gentlemen, other than ending the war in Iraq, the single most significant thing that Barack Obama will do ... will be to determine who the next members of the Supreme Court will be ... So, folks, remember when you go out there, it is not only a woman's right to choose that is at stake. It is [also] whether or not you will have a fair shot at a fair wage, it is whether or not you are treated equally in every aspect of your life. It is literally, literally at stake."

Accompanying that rhetorical fusillade were many of Biden's verbal tics that are already amusing his traveling press corps. He literally seems to sprinkle "literally" in every sentence. And he refers to "ladies and gentlemen" more often than an old-time circus ringmaster. Introduced by Michelle Obama as a surprise guest, Biden looked out at the crowd and declared, "Ladies and gentlemen. Most of them ladies. Thank God for small favors." It is a safe prediction -- especially if the robotic Mitt Romney is picked as McCain's running mate -- that the Biden campaign will be an island of spontaneity in the sea of message discipline that is contemporary politics.

Biden -- who lost his wife and infant daughter in a car crash in 1972 and almost died from a brain aneurysm in 1987 -- is not reticent about revealing his emotions. Speaking to the entire Delaware delegation, which literally fit around five breakfast tables in a motel in suburban Littleton, Biden momentarily lost his composure as he said, "I just want you know that this is a great honor being nominated as vice president of the United States and I'm proud of it. But it pales in comparison to the great honor that I've had ..." Biden paused and looked down at the lectern for a few seconds before he was able to continue. Moments later, Biden alluded to the tragedies that dotted his life when he said a bit cryptically, "I didn't always comport myself, looking back, the way I would have wanted to when bad things happened to me." But then he added, referring to both political allies like Gov. Ruth Ann Minner and family members in the room, "I don't know if I would have made it through all the tough times in my life without you guys. I mean it sincerely."

In political terms, the traditional convention role of the vice presidential nominee is to bloody the opposition, not hemorrhage in public. Hubert Humphrey (and forgive me for harking back to the first convention I attended) set the gold standard in Atlantic City in 1964 when he lambasted Lyndon Johnson's GOP rival by ticking off a series of Senate votes from Medicare to civil rights that were supported by Democrats and Republicans alike, "But not Sen. Goldwater." The rhythmic repetition of this line, as the galleries gleefully joined in, underscored the political message that Goldwater was a dangerous extremist.

Inspiration and heartwarming family moments alone will not win the election. For the Democratic ticket to prevail, someone has to use the prime-time network moments at the convention to convince swing voters that John McCain rather than Barack Obama is the risky choice in this election. And that is literally the mission for Joe Biden who definitely chooses to accept it.