Warnings to Russia from Joe Lieberman and Lindsey Graham

McCain's two top Senate allies lecture Russia on the dangers of trying to dominate and interfere in other countries.

John McCain's two most loyal supporters and most influential foreign policy advisers, Joe Lieberman and Lindsey Graham, have an Op-Ed in The Wall St. Journal today proclaiming that "Russia's invasion of Georgia represents the most serious challenge to this political order since Slobodan Milosevic unleashed the demons of ethnic nationalism in the Balkans." Just as their neoconservative comrade, Fred Hiatt, does in today's Washington Post, Lieberman and Graham demand that the U.S. expend vast resources and assert itself both militarily and politically in order to thwart the New Russian Menace ("This means reinvigorating NATO as a military alliance, not just a political one . . . The credibility of Article Five of the NATO Charter -- that an attack against one really can and will be treated as an attack against all -- needs to be bolstered. . . .The Georgian military should be given the antiaircraft and antiarmor systems necessary to deter any renewed Russian aggression").

The painful absurdity of hard-core warmongers who supported the invasion of Iraq (and, in Lieberman's case, advocating we do the same to Iran and Syria) parading around as defenders of the "political order" is too self-evident, and by now too common, to merit much comment. But this warning from the neoconservative duo about the folly of imperialistic Russian policies is really a sight to behold:


In the long run, a Russia that tries to define its greatness in terms of spheres of influence, client states and forced fealty to Moscow will fail -- impoverishing its citizens in the process. The question is only how long until Russia's leaders rediscover this lesson from their own history.

To recap: the U.S. is going to impede Russian aggression, re-build and protect Georgia, revitalize the military strength of NATO, and restore peace and order to Europe. We're going to stare down the Hitlers of Iran (also in the Post today, Lieberman comrade -- the super-tough-guy and Iran obsessive Micheal Rubin -- lashes out at Joe Biden for "blinking on Iran" and being "Tehran's favorite senator"). We're going to re-build, occupy and safeguard Iraq for decades if necessary. We will single-handedly promote Israel's interests and view each of its enemies and its wars as our own. We're also going to get much tougher on China, just like Russia:


A John McCain presidency would take to a more forceful approach to Russia and China, according to senior foreign policy advisers to the Republican candidate. . . .

Robert Kagan, who wrote much of the [foreign policy] speech delivered [by McCain] in Los Angeles, told the Daily Telegraph: "Russia will loom large for both Europe and the US, and John McCain has been ahead of the curve and has seen this coming down the road. . . .While continuing a "multi-faceted approach" to Beijing, [McCain foreign policy adviser Max] Boot said the US needs "to be forthright on their human rights abuses and not shrink from condemning what they are doing in Tibet for example, or from trying to help Chinese dissidents to stay out of jail".

And we're going to do all that while cutting taxes further. But remember: it's Russia, bulging with cash from oil exports, that better realize -- for their own good -- that its efforts "to define its greatness in terms of spheres of influence, client states and forced fealty to Moscow will fail -- impoverishing its citizens in the process."

The foreign policy team exerting chief influence over John McCain is truly more extremist -- in a purer and more deranged form -- than the foreign policy team of the Bush administration. They're not only the most extremist faction in American political life, but also the most delusional. These aren't just the people who led the U.S. to war in Iraq -- though they are that -- but they're also the ones who actually believe that the Bush administration has been far too meek in its assertion of U.S. military force and too passive in its interference in the affairs of other countries. They want to accelerate -- massively intensify -- virtually every one of the polices that has brought the U.S. to such disgrace and near ruination over the past eight years. There is nothing "moderate" or "centrist" about any of them. John McCain is the Candidate of Bill Kristol and Joe Lieberman and John Bolton for good and clear reasons (including in Georgia): he's the best and most devoted instrument to advance their militaristic agenda.

Is there any real discussion of any of that? Hardly. Here's the trite soap opera pablum and royal court intrigue which, instead, dominates our media's campaign coverage: 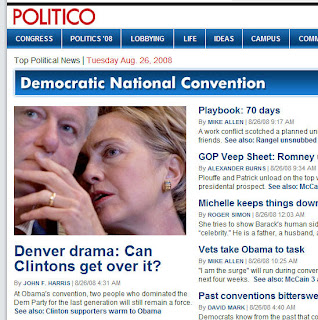 Riveting. Being in Denver has meant that I've been in the proximity of the herds of establishment media figures for the first time, to actually hear what they say and how they conduct themselves off camera, and it's all exactly the same. The only topics they're capable of thinking about are the same ones they chatter about on the TV -- is Obama Making a Mistake by speaking in the stadium because the heartland Americans (who they know and understand so well) will think he's too big for his britches? What Must Hillary Do? How will Michelle Play in the Bowling Alleys? To say it's bereft of substance is to understate the case dramatically.

Digby was on some "media vs. bloggers" panel yesterday with Newsweek's Jonathan Alter and the Post's Chris Cilizza and -- after Alter ranted that bloggers, to cite Digby's summary, "have a psychological condition called 'disinhibition' -- like Alzheimers patients" (as contrasted with the extreme psychological health and balance displayed by Alter when he demanded, in an article excerpted at length by Digby, that the U.S. Government torture people) -- this is what happened:


Ari Melber asked the pertinent question about how a reporter can possibly fail to call out illegal and immoral acts like wiretapping and torture for what they are, under some misguided definition of objectivity or neutrality. Cilizza answered the question honestly, admitting that they don't do a good job of it.

When Cilizza said "they don't do a good job of it," what he was referring to was "reporting on and covering what the Government of the U.S. actually does." If they don't do that well, what do they do well? And Cilizza is right -- they don't do a "good job" of that because they don't do it at all (along those lines, Jerry and Joe Long have a super-concise and appropriately acerbic post on just some of the media's Convention behavior that is quite worth reading).

John McCain himself, and especially those who whisper foreign policy wisdom in his ear, have long had a lengthy list of New Enemies We Must Confront in the World -- beyond those we're already fighting. They not only want to add China, but now especially Russia, to that list, without the slightest concern for the severe degradation they have already imposed on the U.S. military and America's economic security (but, Lieberman and Graham warn, Russia will go bankrupt if they have a 10-day border skirmish with a neighboring state). But infantile calls for Standing Tall in the Face of American Enemies and Not Blinking is still the definition of Seriousness in American political discourse, and the pure derangement and extremism that lies at the heart of this McCain foreign policy mentality will thus continue to go largely unexamined.

UPDATE: I'll be the guest tonight for an online chat from 6:30-7:30 pm EST on the convention, hosted by The Art of the Possible. To register for the chat, you can go here, and the chat itself will be here.