When is a plot not a plot? 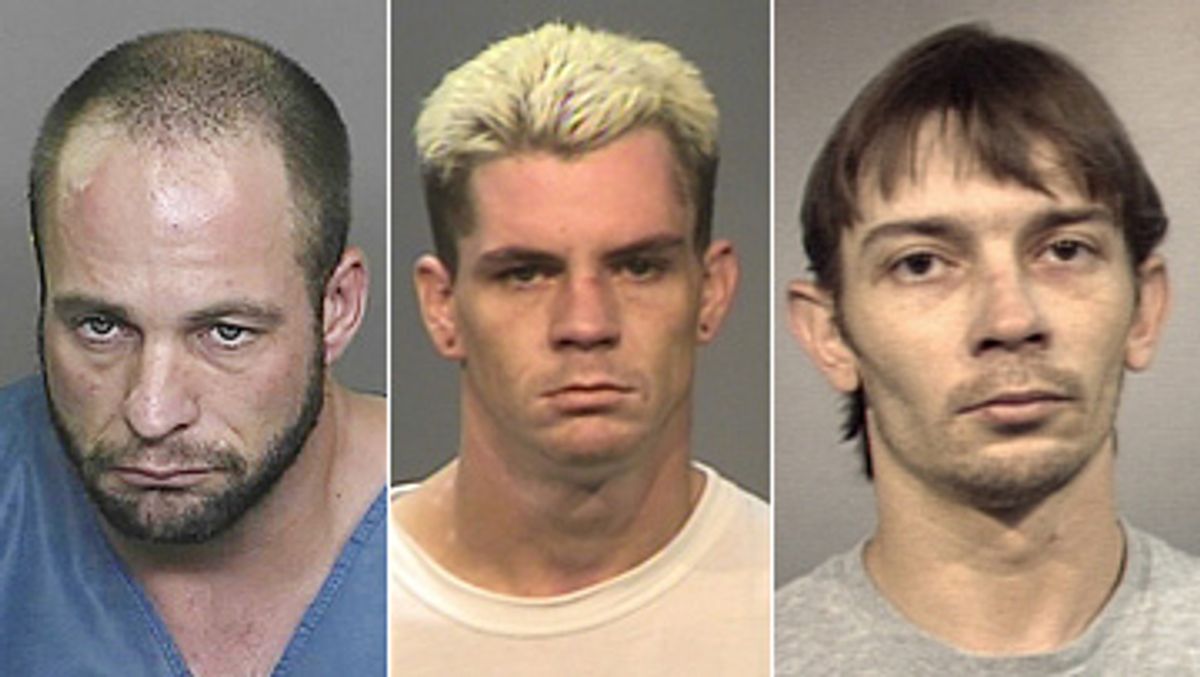 Late Saturday night, the cops in Aurora, Colo., stopped a blue Dodge truck that was swerving all over the road. The driver, a 28-year-old "trance" D.J. named Tharin Gartrell, had a suspended license, a criminal record and four grams of methamphetamine in his pocket. In his trunk, he had two rifles (one stolen), a few boxes of ammo, a bulletproof vest and a portable meth lab. By the next day, based on what Gartrell told them, the cops had called in the feds, and authorities had arrested his cousin, a convicted burglar named Shawn Adolf, and a friend, Nathan Johnson, and turned up more drugs. And in Adolf's case, a background check turned up some outstanding warrants, one with a $1 million bail set. Which might explain why Adolf jumped out the window of his hotel room in Glendale, Colo., when the Secret Service showed up to arrest him on Sunday. From the sixth floor.

That might have been the end of the episode, and it might just have been unusually dramatic fodder for the local paper's crime blotter, except it turned out Gartrell, Johnson and Adolf had a problem with Barack Obama. Namely, they objected to the Democratic presidential nominee's being black, though court documents say they expressed that fact in less delicate terms. And a woman who'd been hanging out in their hotel to "chill and do drugs," according to court papers, told federal agents the three had gathered on the outskirts of Denver in order to try to do something about it. Specifically, to shoot him with the rifles and ammo they'd brought along.

Nathan Johnson confirmed the plot in an interview with a local Denver television reporter from inside the Denver jail. "So your friends were saying threatening things about Obama?" the reporter asked.

"It sounded like they didn't want him to be president?" continued the reporter.

By Tuesday, officials had decided the three men didn't have the capacity to act on their racist impulses, no matter how heavily armed they were. But the whole episode was a strange, and alarming, reminder of why Obama has had Secret Service protection since the spring of 2007 -- there are a lot of people out there who hate the idea of a black president, and are crazy enough to say they'll do something about it. The arrests raised the frightening specter of yet another of America's charismatic young leaders being gunned down by a lunatic. Obama aides declined to comment, citing a strict policy of not discussing security.

The arrests seemed more threatening when they first became public. Serious brass was pulled in; Attorney General Michael Mukasey was briefed. But Tuesday, after an investigation involving three different federal agencies, Colorado's U.S. attorney, Troy Eid, announced that authorities had decided Adolf, Johnson and Gartrell were basically not as dangerous as they looked. The feds didn't plan to charge any of the three men with threatening a presidential candidate, a federal felony that comes with a possible five-year prison term. Instead, Eid charged Adolf (who is variously referred to as Adolph and Adolf in federal documents) and Johnson with violating federal bans on felons owning weapons, and Gartrell with drug possession. (Admittedly, the fact that the three thought Obama was staying in the exurban hotel in which they had rented a room made it seem like they hadn't planned very carefully.)

So the case, instead, became basically an object of curiosity for a press corps hungry for unscripted news. One helpful offshoot from the brief saga: It helped show exactly what it takes to get charged with an assassination plot. Evidently, you need to have some degree of competence and/or sobriety. "The reported threats, hateful and bigoted though they were, involved a group of 'meth heads,' methamphetamine users, all of whom were impaired at the time, and cannot be independently corroborated," Eid told reporters. "The law recognizes a difference between a 'true' threat -- one that might actually be carried out -- and the reported racist rantings of illegal drug users." That was, apparently, what differentiated the case from earlier ones, including an incident where Eid charged a Colorado prisoner with sending an anthrax hoax to John McCain's office near Denver, and a Florida case where a would-be bail bondsman threatened to shoot Obama.

The security in and around Denver this week is extraordinary, as is the security whenever Obama (or McCain) goes anywhere. Both men are basically guarded as if they were already president. (Joe Biden surely learned a quick lesson in the stakes of what he's getting himself into as Obama's running mate when the Secret Service dispatched agents to his house late Friday night, before news of his selection was even officially confirmed.) It took the arrests, and the mini-frenzy of breaking news alerts they set off earlier this week, to remind convention-goers that the metal detectors and searches were more than just a nuisance. Sadly, it seems, they're still a necessity.