Too much narrative trickery takes away from the real talent in this post-9/11 thriller, Don Cheadle and Sa 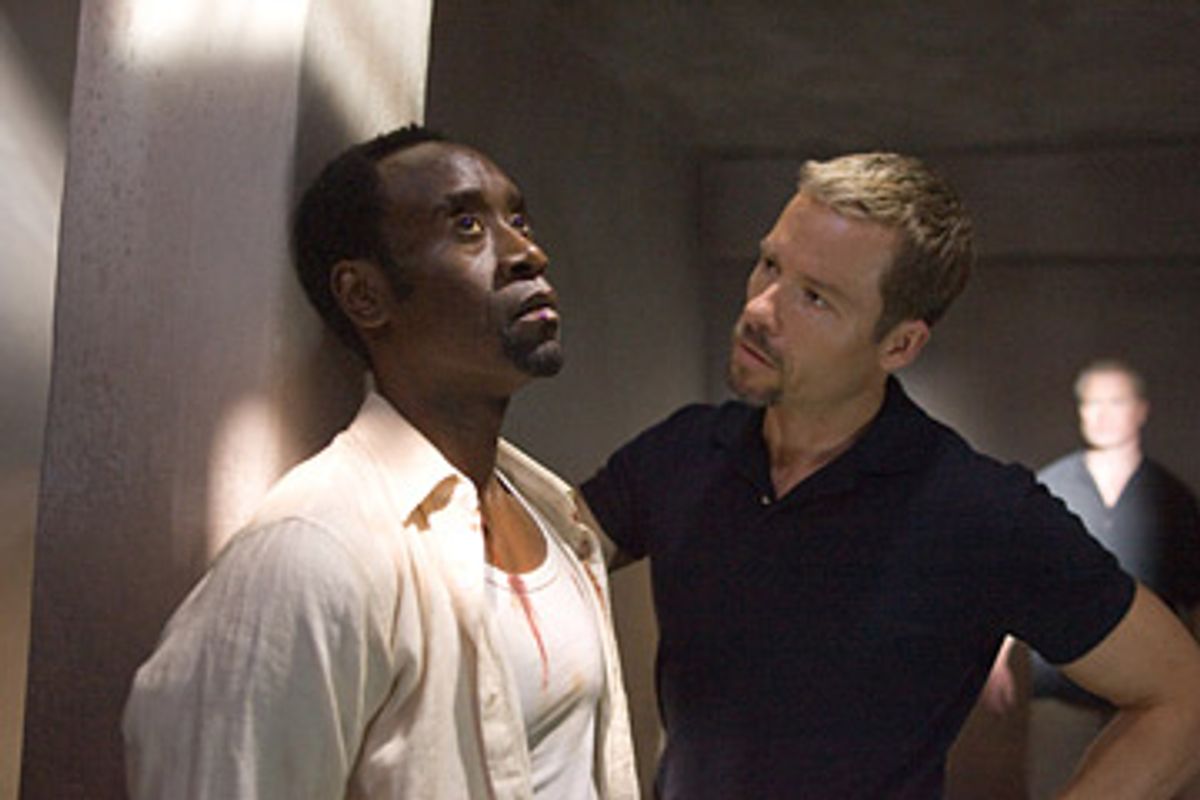 "Traitor" is an earnest, efficient, serviceable thriller that makes a valiant effort to untangle some of the moral complexities of the post-9/11 world. But acknowledging moral complexities isn't the same as making us think about them, and the problem with so many post-9/11 drama-slash-thrillers -- from "Syriana" to "Rendition" to "Vantage Point" -- is that they're not necessarily better or more interesting than your standard old-school Cold War spy thriller. It's simply that they're topical, and thus poised to fool us into thinking they're deeper, politically or morally, than they really are.

"Traitor," which was written and directed by Jeffrey Nachmanoff, from a story by Steve Martin (yes, that Steve Martin), has been so liberally polished with the varnish of sincerity that it would be hard, for its first hour at least, not to take it seriously. Don Cheadle plays Samir Horn, an American (and a devout Muslim, as well as an explosives expert) who becomes involved with an Islamic fundamentalist group as the result of his friendship -- which flowered from a business relationship -- with Omar (Saïd Taghmaoui), a soft-spoken, well-educated, extremely likable terrorist. Samir has a complicated past that rouses the suspicions of American antiterrorist operatives. And in trying to figure out what's what, one wily FBI agent, Roy Clayton (Guy Pearce), tries to fit a bunch of disparate, jagged puzzle pieces together.

To tell this story, Nachmanoff uses that now-ubiquitous device, the mosaic narrative -- in other words, some pieces of the story are filled in before you know what to make of them, while others remain missing until long after you've stopped caring. The action in "Traitor" hopscotches from somewhere in Yemen to Marseille, from Washington to Nice; the movie keeps ricocheting, the better to make us feel dislocated in what's already a complex, confusing world. Nachmanoff shows some skill at navigating the story's plot twists: You may see them coming, but he at least finds understated, visually arresting ways of confirming them. The movie was shot by J. Michael Muro, who doesn't rely on clever camera angles to jazz things up -- its look is refreshingly austere. And Billy Fox's editing suggests the movie has been made for adults. In other words, it doesn't try to jack up our heart rates, falsely, by using lots of fast cutting.

But "Traitor" doesn't move forward with the power and confidence it needs. The picture begins to lose momentum about halfway through, and though I was intrigued enough to keep dutifully chugging along with it, whatever power it had over me dissipated minutes after I left the theater. Tricky plots are fun, but they don't necessarily serve actors well, and if "Traitor" had been streamlined and simplified just a little, it might have provided a better showcase for two terrific performers. Cheadle, in movies like "Hotel Rwanda" and "Crash," has become the go-to guy for roles that require bringing deep-rooted internal moral conflicts to the surface, and it's remarkable that he can play these parts so frequently without making them feel tired or programmed. Cheadle is deeply attuned to the cerebral and the emotional; in fact, he seems to make no distinction between them. In his portrayal of Samir, the anxiety and suffering we see in his eyes are a kind of electricity, a current generated by a brain that's whirring between the extremes of right and wrong.

Pearce may be the other big star in "Traitor," and while his performance is serviceable, it doesn't cut deeply. Taghmaoui, as a radical motivated by moral certainty, is the real actor to watch here. Taghmaoui is a French-born actor (of Moroccan descent) who has been appearing in French films for years. More recently, American audiences have seen him in pictures like "Vantage Point" and "The Kite Runner," and he played a fearsomely complex torturer in "Three Kings." Here Taghmaoui takes on the most thankless role imaginable, that of a sympathetic terrorist, and he's subtle enough to make the performance stick: He makes it possible for us to both like Omar and recoil from his actions (as well as his motivation). To his credit, Nachmanoff doesn't overstate the "terrorists are people too" case by giving Omar an adorable baby back home, or an anxious wife who worries about his welfare, or any of the other dumb tropes typically used to remind us of a character's humanity. (As if monsters don't sometimes have beloved wives and babies, too.) Omar is a solitary figure devoted to jihad, and particularly if you're a Westerner, what's to like about that?

But Taghmaoui doesn't court our approval, or even our understanding: All he does is ask us to accept his character's conviction, and we do. At one point, during a discussion in which Omar tries to explain to Samir the passion behind the terrorists' cause, Samir quotes Martin Luther King Jr.: "If a man hasn't found something worth dying for, he isn't fit to live." Omar waits a beat as he sizes up his friend, and then responds, "You're a very funny man." It's clear from the tone of his voice that the bitterness of the joke hasn't eluded him.