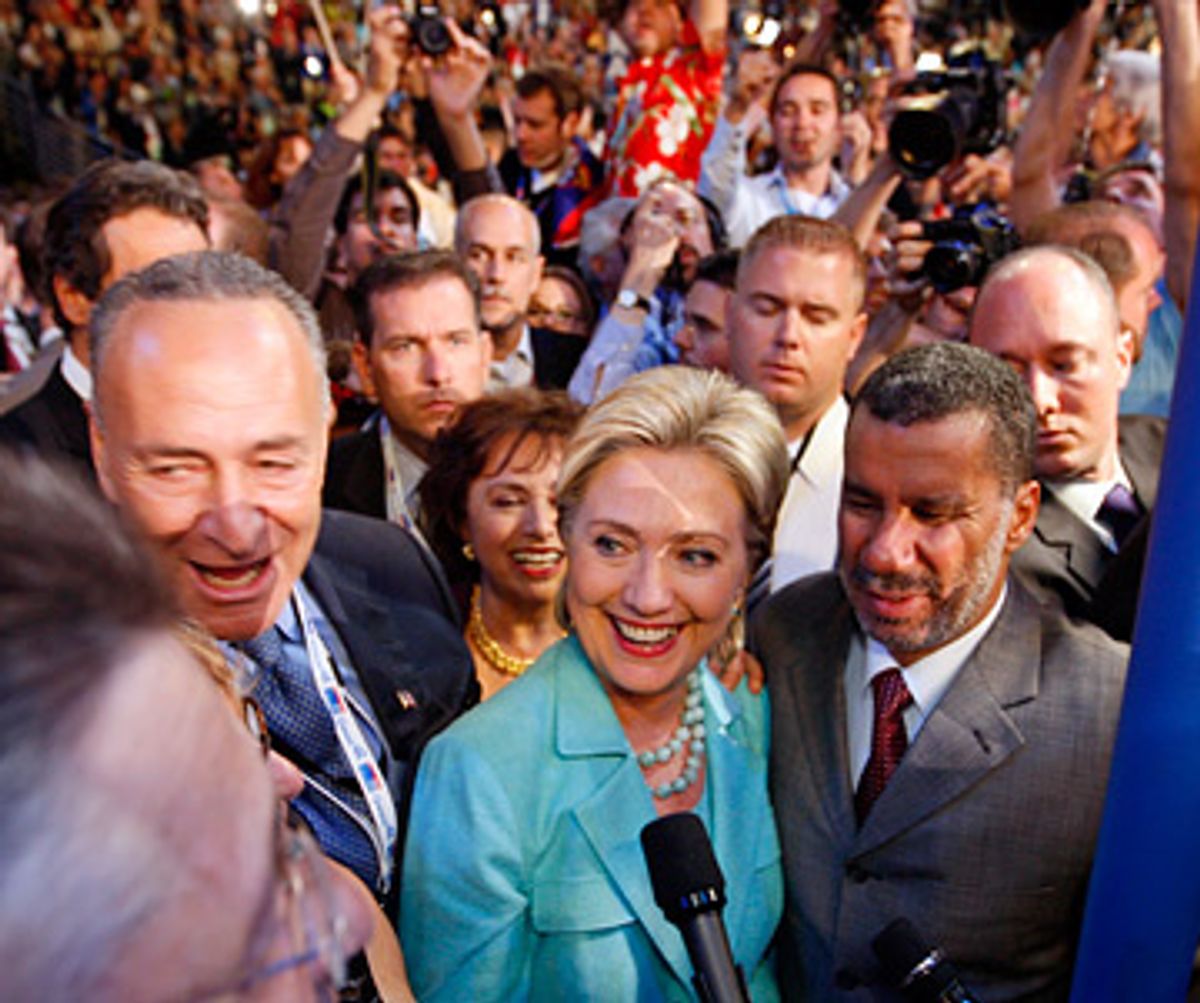 Hillary Clinton's presidential campaign finally came to an official end Wednesday night at the Democratic convention with neither a bang nor a whimper, but with one more show of unity behind Barack Obama -- this one wearing Robert's Rules of Order as a disguise.

"Madame Secretary," Clinton called out on behalf of the New York delegation, midway through a roll-call vote that had been carefully organized so Obama wouldn't win a majority until she arrived. "I move that the convention suspend the procedural rules and suspend the further conduct of the roll-call vote. All votes cast by the delegates will be counted. And I move that Senator Barack Obama of Illinois be selected by this convention by acclamation as the nominee of the Democratic Party for president of the United States."

With that, as cameras flashed (and a few delegates cried), Obama's title officially changed from "presumptive nominee" to just nominee, period. And everyone gathered in the Pepsi Center stood and swayed to the dulcet tones of the '70s soul music blaring from the speakers; yes, America, the Democratic Party is riding one big "Love Train" to the White House.

The moment was touching (even if it was also utterly predictable). A huge roar went up when Clinton walked into the hall. Any conceivable surprise about the denouement vanished, though, with a simple glance in the vicinity of the New York delegation, where a huge camera scrum had formed around the microphone well before the roll call even got out of the A's. Clinton would, without a doubt, be the one to put Obama over the top.

She smiled -- a little -- as she read out her motion, surrounded by Gov. David Patterson and Sen. Chuck Schumer. Big states like California and Obama's own home of Illinois had passed during the vote. Despite the chattering on cable news all week that made it seem as if the convention was hurtling toward a potentially fatal cliff in the roll-call vote, Obama was actually on track to win more delegates than he'd picked up during the primary season.

Arkansas, Bill Clinton's home state and one whose primary Clinton had won in a landslide, cast all 47 of its votes for Obama, winning big cheers (though that appeared to have been a clerical error -- the state apparently meant to give most, but not all, of its votes to Obama). New Hampshire, where Clinton's unexpected (by the polls, the pundits and even the campaigns) win set the candidates on course for a dogfight through June, did the same with its 30. Other states reported vote totals that clearly reflected summer unity rather than spring ballots.

Earlier in the day, Clinton had released her delegates from any obligation to support her. "Many of you feel a responsibility to represent the voters in the states," she told her supporters, in a valedictory speech from a podium plastered with Obama's campaign logos. "Others of you, after this long journey we've had, want the chance to vote what's in your heart. Still others will be voting for Senator Obama because they want to demonstrate their personal commitment to the unity of this party behind our nominee."

In the room, there were a few audible cries of "No!" as Clinton freed the delegation, though they were outnumbered by lusty "Yays!" The "reception" (which was really just a big meeting in a carpeted ballroom) was hardly a PUMA convention. These delegates, unlike a few protesters who gathered outside the Pepsi Center to demand more recognition for Clinton, were ready to move on.

"For me, voting for her was enough," said Lee Hakel, 66, a Clinton delegate from Bowling Green, Ohio. Her husband, Milton, was an Obama delegate; theirs was a unity household, and both Hakels were eager to second the motion to nominate Obama by acclamation. But Lee Hakel was a little sad to see Clinton bow out. "She's a hard, strong woman."

Clinton knew the limits of what she could ask of her supporters. "I am not telling you what to do, because you come here from so many different places, having made this journey and feeling in your heart what is right for you," she said. "I signed my ballot this morning for Senator Obama, but a lot of other people who have signed their ballots have made a different choice."

The one hitch in the unity plan actually came more from logistics than from loyalty to losing candidates. By early afternoon, most state delegations still didn't know what the plan was for the roll-call vote. Or, in fact, how they were supposed to come up with their totals. Convention officials handed out little hand-held computers that each state was supposed to use to send its vote tallies in -- at least one state's votes might have gone unrecorded if I hadn't helped state party officials figure out how to log into the voting application the DNC had installed. Most delegations cast their votes at breakfast meetings, but they had until 3 p.m. in Denver to turn them in. So the tallies changed after Clinton released her supporters, and some states wound up reporting totals with fewer votes than they were entitled to.

And the drama that the media had been waiting for all week, in the end, seemed pretty apocryphal. Yes, House Speaker Nancy Pelosi moved quickly -- without pausing for breath -- to declare Clinton's motion had passed, rather than risk any loud objections from dead-enders who couldn't play along. But both the Clinton and Obama camps seemed to be sick of the chatter. "This whole thing is getting ridiculous," one person close to Clinton told Salon Wednesday afternoon. "Doesn't cable news have anything else to do?"

Another Clinton advisor told me Wednesday morning that the negotiations that were being reported were never really that involved -- basically, the roll-call vote was handled as Obama's aides wanted. And Obama's campaign manager, David Plouffe, told reporters the arrangement came together pretty naturally. "The discussion with the Clintons [about the roll call] was one of the easier things we've done," he said. "We think it's important to celebrate her candidacy." Wednesday night, with that one final flourish, that's exactly what they did.