What's missing from the Democratic convention?

Democrats have largely avoided discussions of the radicalism of the past eight years, and even more so personal attacks on John McCain. Is that wise? 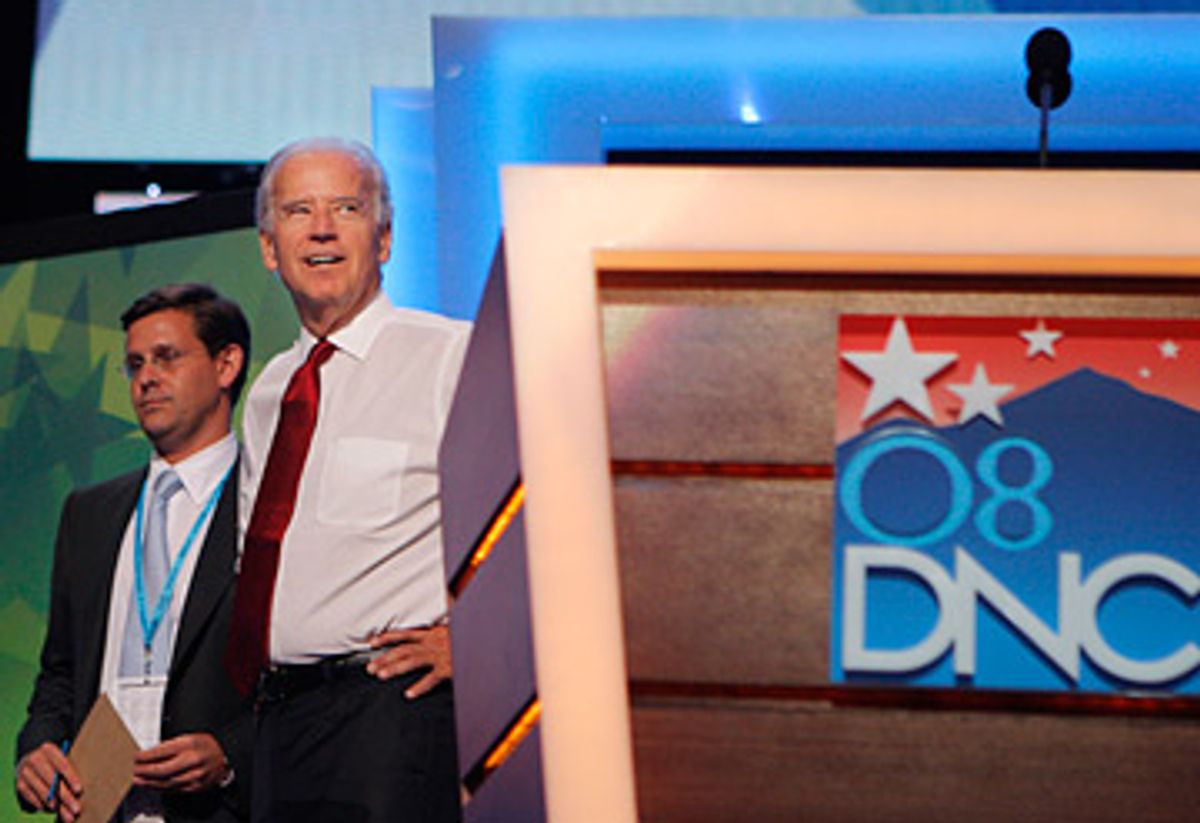 As one would expect them to be, virtually all of the prime-time speeches at the Democratic Convention have been -- from a rhetorical perspective -- very well-crafted and well-delivered. Bill Clinton's speech, in particular, deserves all the plaudits it is receiving, both in terms of content and delivery. But as competent, well-executed and even dramatic as the Convention has been, at least as striking is what has been missing.

First, there is almost no mention of, let alone focus on, the sheer radicalism and extremism of the last eight years. During that time, our Government has systematically tortured people using sadistic techniques ordered by the White House; illegally and secretly spied on its own citizens; broken more laws than can be counted based on the twisted theory that the President has that power; asserted the authority to arrest and detain even U.S. citizens on U.S. soil and hold them for years without charges; abolished habeas corpus; created secret prisons in Eastern Europe and a black hole of lawlessness in Guantanamo; and explicitly abandoned and destroyed virtually every political value the U.S. has long claimed to embrace.

Other than a fleeting reference to such matters by John Kerry in a (surprisingly effective) speech which most networks did not broadcast, one would not know, listening to the Democratic Convention, that any of those things have happened. Even our unprovoked and indescribably destructive attack on Iraq, based on purely false pretenses, has received little attention. Those things simply don't exist, even as part of the itemized laundry list of Democratic grievances about the Bush administration. The overriding impression one has is that the only things really wrong during the last eight years in this country are that gas prices are high and not everyone has health insurance. Those are obviously very significant problems, but they are garden-variety political issues which don't begin to capture the extremism that has predominated in this country under GOP rule, and don't remotely approach conveying the crises on numerous fronts the country faces.

It's certainly true that the purpose of these Conventions are principally political, and it thus makes perfect sense that Democrats are choosing to focus on the issues they think will help win them the election. The desire that they do anything else is both unrealistic and misguided. During the television show known as the Convention, they should devote the bulk of their efforts to the concerns most voters have, and all polls demonstrate that those concerns are chiefly grounded in economic insecurity.

But even while acknowledging those realities, the Democrats, as a result of these omissions, are largely guilty of doing what they typically do: appearing listless and amorphous by standing for nothing other than safe and uncontroversial platitudes. The loudest reaction Bill Clinton provoked last night was when he proclaimed, in passing and without elaboration, that Obama is "ready to preserve, protect, and defend the Constitution of the United States." So much of the case against the Bush administration -- much of what has fueled high-level Democratic energy to remove the GOP from power -- has been driven by the GOP's radical transformation of the core political values of the country, trampling on the Constitution and overtly embracing policies that are completely anathema to how Americans perceived of their country.

Republicans often use their Conventions as an opportunity not just to feed voters what they want to hear but to induce them to see the world the way the GOP wants them to see it. Even if it's true that the voters who Democrats are targeting care little about these issues -- and that's a precarious assumption -- the Convention is still an opportunity to persuade them why they should care and, at the very least, to fuel Democratic resolve to win and to demonstrate to non-core-Democratic voters that there are political values that Democrats actually "stand for." They've done very little of that. The virtual nonexistence of these issues in the key Convention speeches, the failure even to take a stand on virtually any of it, seems to be as much of a political failure as it is a failure on the merits.

More politically damaging still is the absence of any truly stinging attacks on John McCain. Even Joe Biden's speech -- billed as the "attack dog" event -- almost completely avoided any criticisms of McCain the Person, who will emerge from the four days here as a Wonderful, Honorable, Courageous Man -- a friend to Democrats and Republicans alike -- who just happens to be wrong on some issues. The Republicans will spend the next four days mercilessly ripping Barack Obama's character to shreds, as they did to John Kerry in 2004. Just recall a few of the highly effective and deeply personal assaults on Kerry from the featured GOP speakers in 2004:

* [Kerry] even, at one point, declared that himself as an antiwar candidate. And now he says he’s a pro-war candidate. At this rate, with 64 days left, he still has time to change his position four or five more times!

* Remember -- Remember just a few months ago, John Kerry kind of leaked out that claim that certain foreign leaders who opposed our removal of Saddam Hussein prefer him. Well, to me that raises the risk that he might well accommodate his position to their viewpoint.

* Even in this post-9/11 period, Senator Kerry doesn't appear to understand how the world has changed. He talks about leading a "more sensitive war on terror," as though Al Qaeda will be impressed with our softer side. He declared at the Democratic Convention that he will forcefully defend America -- after we have been attacked. My fellow Americans, we have already been attacked, and faced with an enemy who seeks the deadliest of weapons to use against us, we cannot wait for the next attack.

*Senator Kerry denounces American action when other countries don't approve -- as if the whole object of our foreign policy were to please a few persistent critics. In fact, in the global war on terror, as in Afghanistan and Iraq, President Bush has brought many allies to our side. But as the President has made very clear, there is a difference between leading a coalition of many, and submitting to the objections of a few. George W. Bush will never seek a permission slip to defend the American people.

* Senator Kerry also takes a different view when it comes to supporting our military. Although he voted to authorize force against Saddam Hussein, he then decided he was opposed to the war, and voted against funding for our men and women in the field. He voted against body armor, ammunition, fuel, spare parts, armored vehicles, extra pay for hardship duty, and support for military families. Senator Kerry is campaigning for the position of commander in chief. Yet he does not seem to understand the first obligation of a commander in chief -- and that is to support American troops in combat.


* No one should dare to even think about being the Commander in Chief of this country if he doesn't believe with all his heart that our soldiers are liberators abroad and defenders of freedom at home. But don't waste your breath telling that to the leaders of my Party today. In their warped way of thinking America is the problem, not the solution. They don't believe there's any real danger in the world except that which America brings upon itself through our clumsy and misguided foreign policy.

* And no pair has been more wrong, more loudly, more often than the two Senators from Massachusetts, Ted Kennedy and John Kerry. Together, Kennedy/Kerry have opposed the very weapons systems that won the Cold War and that are now winning the war on terror. . . . This is -- This is the man who wants to be the Commander in Chief of our U.S. Armed Forces?! U.S. forces armed with what -- spitballs?!

* For more than twenty years, on every one of the great issues of freedom and security, John Kerry has been more wrong, more weak, and more wobbly than any other national figure. As a war protester, Kerry blamed our military. As a Senator, he voted to weaken our military. And nothing shows that more sadly and more clearly than his vote this year to deny protective armor for our troops in harms way, far-away.

* To be fair, there are some things my opponent is for. (Laughter.) He's proposed more than two trillion dollars in new federal spending so far, and that's a lot, even for a senator from Massachusetts. (Applause.) And to pay for that spending, he's running on a platform of increasing taxes -- and that's the kind of promise a politician usually keeps. (Laughter.)

The GOP's attacks on Kerry in 2004 were mocking, scornful, derisive, demonizing and deeply personal -- in speech after speech -- and they were also highly effective. They weren't the slightest bit deterred by the fact that Kerry was a war hero who was wounded multiple times in Vietnam while George Bush and Dick Cheney. . . . weren't. Has there been anything remotely approaching those attacks on McCain by any of the prime-time Democratic speakers?

The GOP assaults on Barack Obama will be -- have already been -- even more vicious and personalized, which means by the end of their Convention next week, John McCain will be, by all accounts, an honor-bound, principled and courageous patriot (who, at worst, is wrong on some issues), while Barack Obama will be some vaguely foreign, weak, appeasing, super-ambitious, exotic, empty-headed, borderline un-American liberal extremist. Democrats seem to be banking on the fact that the agreement which most Americans have with their policy positions, along with widespread dissatisfaction with the current state of things, will outweigh the effects of this personality war -- a war which they, yet again, have allowed to be one-sided.

UPDATE: Rather presciently, Blue Texan made very similar points, in similar form, last Friday, before the convention even began.


Barack Obama will directly attack John McCain and George W. Bush in his speech accepting the Democratic Party's nomination for president, according to excerpts released by the campaign.

He will condemn the "failed presidency of George W. Bush" and criticize McCain on the environment and energy. . . .

Obama will seek to tie McCain to Bush, hammering home a theme the Democrats have been sounding throughout their convention in Denver.

"John McCain has voted with George Bush 90 percent of the time," Obama will say.

"What does it say about your judgment when you think George Bush was right more than 90 percent of the time? I don't know about you, but I'm not ready to take a 10 percent chance on change."

We'll see how sharp the attacks are and how effective they end up being. A partial transcript of the speech is here.

UPDATE III: Whatever else one might want to say about it -- and, as speech-giving goes, I think it was superb -- Obama's speech was, by far, the most sharply critical of both Bush and McCain and was extremely effective in those criticisms.