Takashi Miike's "Sukiyaki Western Django" offers a spectacular mashup of Kurosawa, Sergio Leone, Tarantino and the Bard -- and it's weirder than that sounds. 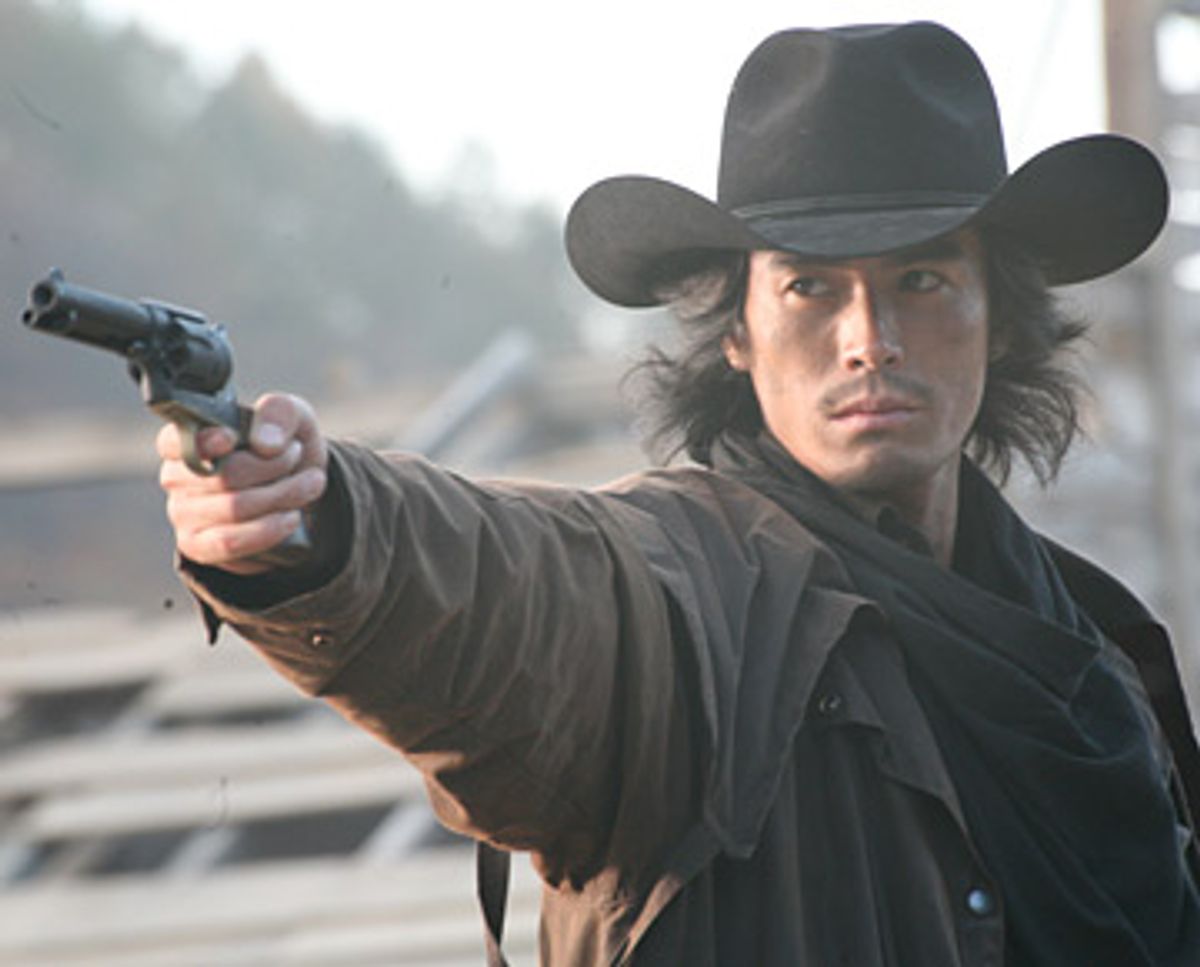 Hideaki Ito as a wandering gunman in "Sukiyaki Western Django."

I guess the premise of Takashi Miike's "Sukiyaki Western Django" goes something like this: Given that the Japanese samurai film and the American (and/or European) western are fundamentally the same genre, and that Akira Kurosawa, Sergio Leone and Sam Peckinpah were all drilling in the same well -- and given that a lot of their movies were ripping off Shakespeare's plots in the first place, with less talking and more killing -- why not boil up all those stories and elements and influences in the same pot and see what happens?

What happens is undoubtedly peculiar, and easy to pick apart or dismiss as hipster contrivance if you haven't seen it. "Sukiyaki Western Django" is an ultraviolent gunslinger opera set in a nowhereland that's partly 11th century rural Japan and partly 19th century Nevada, with a cast of Japanese actors speaking English (with varying degrees of success) alongside a supporting performance by Quentin Tarantino. It's got snatches of "Henry the Sixth," large doses of Kurosawa's "Yojimbo" and bits and pieces drawn from Peckinpah's, Leone's and Clint Eastwood's classic westerns.

Once you get past the question of why someone would make a movie this artificial in the first place and move on to the answer (purely for the hell of it), "Sukiyaki Western Django" is a blood-drenched, dynamite, often hilarious and uniquely weird big-screen entertainment. It also claims this year's version of the "Harder They Come" prize, as a movie that requires subtitles for every possible viewer; if you're completely fluent in English and Japanese, that's still not quite good enough.

Fans of Miike, the prolific and eccentric Renaissance man of recent Japanese cinema, won't be surprised by any of this. Although best known for his violent yakuza dramas ("Ichi the Killer") and gruesome horror films (the nearly unwatchable "Audition"), Miike has created a miscellaneous body of work that includes children's superhero movies, teen-oriented dramas, sentimental comedies and self-consciously difficult art films. I'm not going to present myself as a world expert, having seen seven or eight of the 40 or so features he's made in the last 15 years. But if Miike arguably works too hard and too fast, he's never afraid of big undertakings. In a cinematic realm increasingly dominated by mechanical dullness at one end and muted caution at the other, his passionate, cocaine-to-the-brain-stem approach to cinema is a blast of fresh air.

Plot synopsis doesn't help much with "Sukiyaki Western Django," since its story is more a collection of archetypes than an original narrative. We've got a lone gunslinger (Hideaki Ito) with a mysterious back story, coming into a town fatally divided between the Genji clan, also known as the Whites, and the Heike, or Reds. These names have roots in feudal Japanese history, but they also refer to England's late-medieval War of the Roses, fictionalized in "Henry the Sixth." Kiyomori (Koichi Sato), the boorish leader of the Reds, begins to read scenes from the play aloud, and insists his men address him as Henry.

With his designer-esque outfits, just-below-the-lip piercing and almost feminine complexion, White leader Yoshitsune (Yuseke Iseya) looks more like a contemporary Asian pop star than a figure from any of the film's possible historical periods. What else is there? A seductive young widow-turned-hooker (Yoshino Kimura), who sees the lone gunman as her pathway to vengeance, a bedraggled female loner (Kaori Momoi) who turns out to be a legendary gunfighter long believed dead, and a spineless sheriff with a split personality (Teruyuki Kagawa). Then there's the dynamite, the machine gun, the overly elaborate scenes of mayhem, the anime-style sound effects (and one brief animation sequence), the gastrointestinal humor, the little boy who can't speak but grows a hybrid red-and-white rose, and a few brief legendary-origin flashback scenes featuring Tarantino as a roaming gunman spouting philosophy (and consuming some of that titular sukiyaki) in the shadow of a cardboard Mount Fuji.

Nothing in that summary, believe it or not, conveys how fundamentally cracked "Sukiyaki Western Django" is -- all these actors laboring to master a phonetic version of early modern American drawl, for a director who does not speak English! -- but it's precisely its insane commitment to all its contradictory and complementary source material that saves it from being pure cleverness. Miike doesn't simply want to dazzle us with his artful shot-making, lovingly orchestrated action scenes and gory death moments. OK, he does want to do that, but he also wants to sweep us up in the grandiose, mythical clutter-tide and deliver a genuine emotional catharsis. I'm not sure he quite gets there, but it's one hell of a spectacular ride.

Beyond The Multiplex Movies Shakespeare