John McCain sends an e-mail to his supporters in which he calls his new running mate "a trailblazer and a reformer." 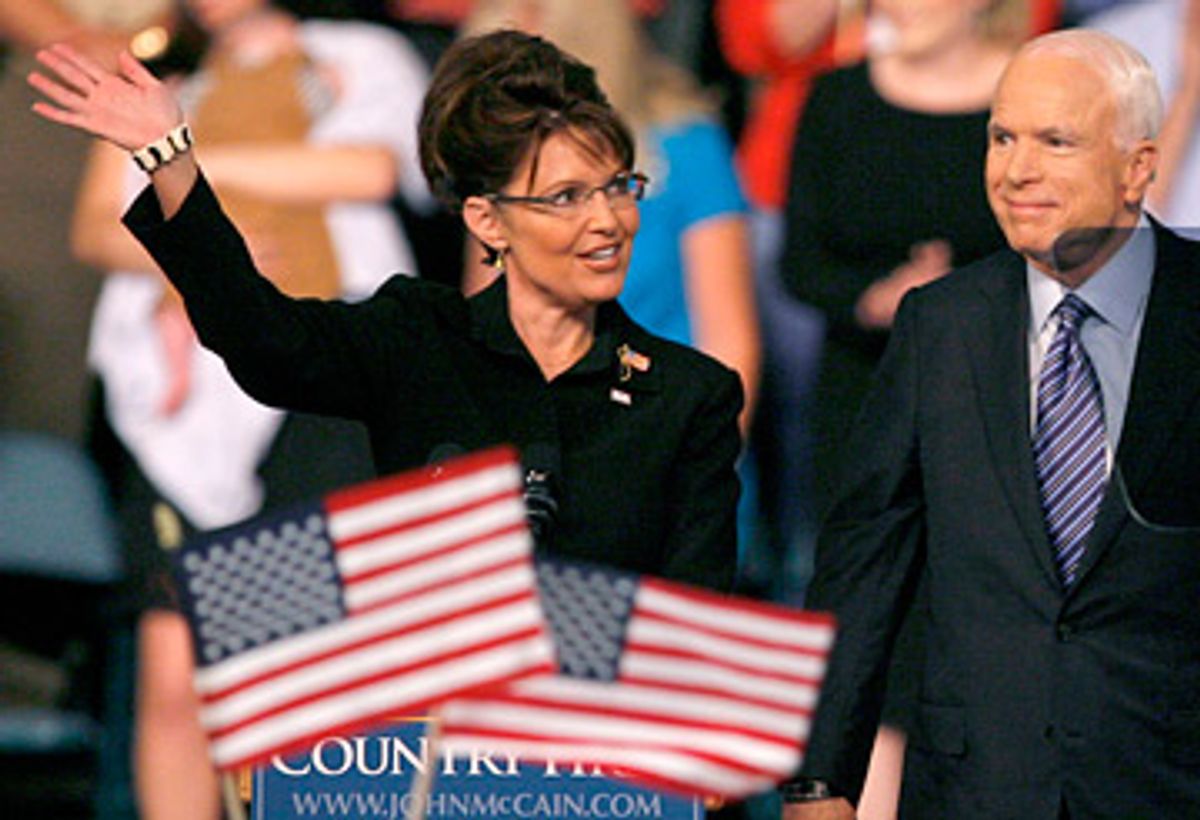 Unsurprisingly, soon after the debut of the full Republican ticket, John McCain was, like any good politician would, using the rollout to ask his supporters for money. In an e-mail, McCain introduced his new running mate, Alaska Gov. Sarah Palin, calling her "a trailblazer and a reformer ... fearless -- exactly the type of leader I want at my side."

I am honored to announce that I have chosen Governor Sarah Palin of Alaska as my choice for the Republican nominee for Vice President. As a father with three daughters, I can't express how proud I am to choose the first female Republican Vice-Presidential nominee.

Sarah Palin is a trailblazer and a reformer. As the first female governor of Alaska, she challenged a corrupt system and has been a tireless advocate for reform -- passing a landmark bill on ethics reform. She has taken on the old politics in Alaska and reformed the state's energy industry. She rejects wasteful pork barrel spending. She's fearless -- exactly the type of leader I want at my side and the type of leadership we will bring to Washington.

My friends, together Sarah Palin and I make the strongest presidential ticket and I know that she joins me in asking for your support as we head into our Convention week in Minnesota. We're shaking things up in this campaign -- and Governor Palin and I are ready to bring real reform to Washington.

The polls indicate this will be a tight race as we head into the fall campaign against Senators Obama and Biden. I expect the polls to remain close all the way up to Election Day and that is why any help you can give today will go a long way to make history on November 4th.

You may already know that I have decided to accept federal matching funds for the final months of this campaign -- keeping a campaign promise I made. But that means that August 31st marks the last day I can accept your primary contribution. Will you make an immediate donation of whatever you can give -- whether it's $50 or $500 to ensure Governor Palin and I win in November?

You can be assured that as President and Vice President, Governor Palin and I will always put country before all else. We are ready to lead and I ask that you join our campaign today. Your support is deeply appreciated.

P.S. I have chosen Governor Sarah Palin as my running mate and today we will hold a joint campaign rally in Dayton, Ohio. Please tune in to any of the cable news stations to watch this rally at noon eastern time. After watching the rally, I hope you'll visit my website to financially support our ticket as we head into next week's Republican Convention. Thank you.