In his acceptance speech, Barack Obama stood up for Democratic values, took the fight to McCain -- and proved that the United States is still capable of reinventing itself. 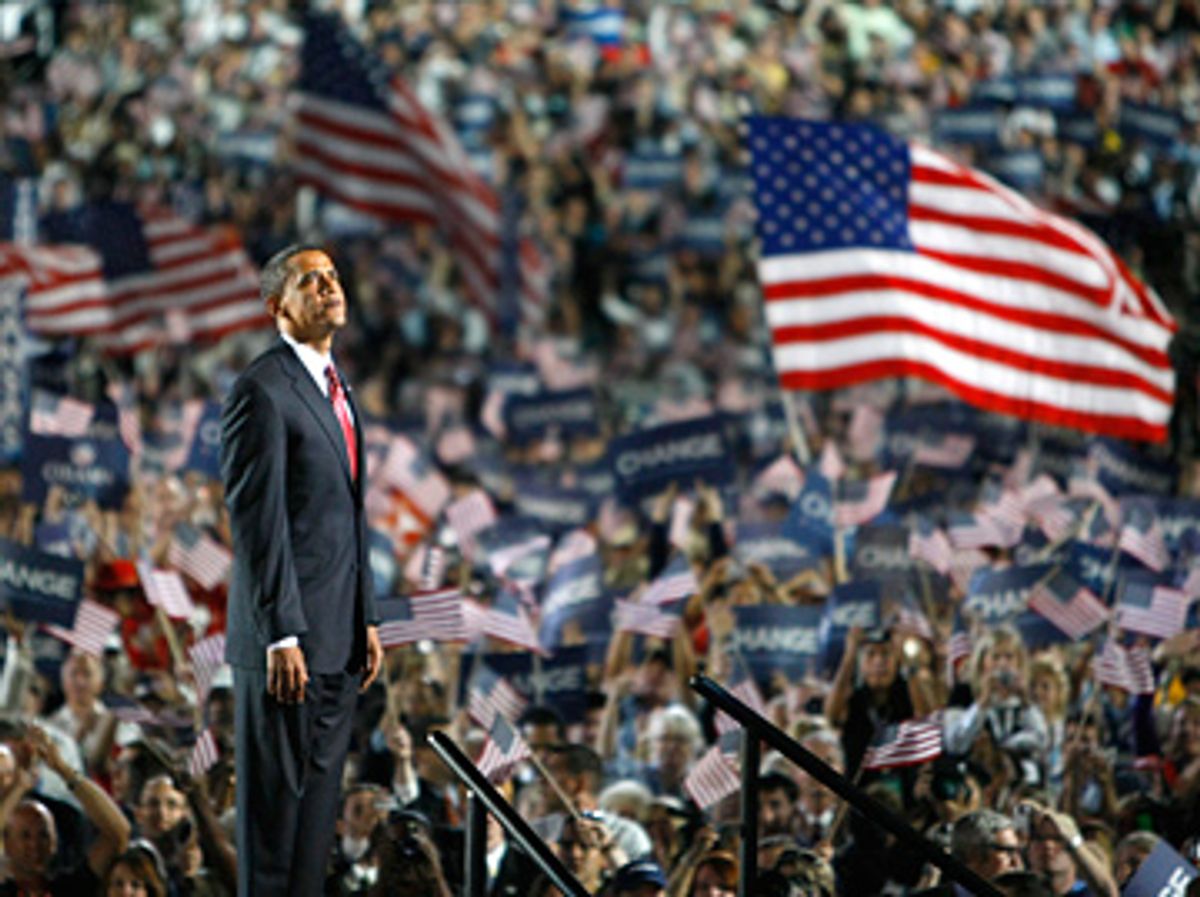 Barack Obama -- smiling, reassuring and firm -- was the face of change. Four years after this little-known Illinois state senator delivered the keynote address at the Democratic convention, Obama accepted the Democratic nomination in a stunning testament to the pace of change. Mile High Stadium filled to the rafters with 80,000 walking-on-air Democrats was the place of change.

The Democratic Party, hungry for power after being in the wilderness for 20 of the last 28 years, could have played it safe, could have searched until it found a politically acceptable white male politician. But instead, after a spirited and historic battle against Hillary Clinton, the Democrats selected the first African-American presidential nominee in history, decades before the poets, preachers and certainly the political pragmatists dreamed that such a transformation of America was possible.

Watching Barack Obama give the most important -- though not the most eloquent or boldest speech of his career -- was a reminder that near miracles can happen even in this jaded decade. And, win or lose in November, America has been reshaped forever by this alliance of what Obama described as "young people who voted for the first time and the young at heart." On a night for defying the taboos of intolerance, the Democratic nominee went out of his way to affirm that "our gay and lesbian brothers and sisters deserve ... to live lives free of discrimination," even if Obama glided by gay marriage.

Yet the subtext of the Obama speech was an acknowledgment of how arduous the political climb to November victory remains. Repeatedly, Obama had to deflect the expected Republican attacks on his love of country and the sneers over his unorthodox family background. "Let us agree," Obama declared, adroitly masking his defensiveness, "that patriotism has no party. I love this country, and so do you and so does John McCain." He also responded to the Republican refrain that his campaign has been a rock star's ego trip when he said, "I stand before you tonight because all across America something is stirring. What the naysayers don't understand is that this election has never been about me, it's about you."

The Obama campaign is under no illusions that a single speech will allow Obama to surge ahead of McCain in the national polls. At a breakfast with reporters Thursday morning, Obama's top strategist David Axelrod conceded, "I think this is a close election. It is a close election now, it will be a close election after the conventions and it will probably be a close election until the end." Axelrod also pointed out that deciphering the instant polls after Denver will be difficult "because this is an unprecedented situation with two conventions coming one right on top of the other." The late August political calendar is so crowded that Democrats worried that the McCain campaign would leak its vice-presidential pick in the midst of Obama's speech instead of waiting to announce it at a Friday noontime rally in Dayton, Ohio.

News reports suggest that McCain is struggling to fill a 10,000-seat arena in Dayton, while Obama, of course, could probably hold a standing-room-only rally in Yellowstone National Park. The question is how to quantify the "enthusiasm gap" (this week's buzz phrase) between the two campaigns. The Obama campaign ballyhooed the Mile High outdoor acceptance speech (the first time a nominee ventured away from the convention hall since John Kennedy in 1960) as an invaluable Rocky Mountain organizing tool. "John McCain, in my view, cannot win the presidency without carrying Colorado," said Obama campaign manager David Plouffe, at the breakfast organized by the Christian Science Monitor. Aside from 1992 when third-party candidate Ross Perot was on the ballot, Colorado has gone Republican in every presidential election since 1964.

In his convention speech, Obama tried to portray his Republican rival, who turns 72 on Friday, as out of touch on economic issues. "Now I don't believe that Senator McCain doesn't care what's going on in the lives of Americans," Obama said. "I just think he doesn't know." Moments later, after ridiculing the Arizona senator for believing in trickle-down economics, Obama repeated the refrain: "It's not because John McCain doesn't care. It's because John McCain doesn't get it." The none too subtle message: McCain is a fuddy-duddy not because of his age but because of his Republican values.

This was the speech in which Obama defined his vision and fleshed out his inspirational rhetoric with tangible proposals. But the careful way that Obama laid out his agenda made it clear that the Democratic nominee is cleaving toward the center. What was the very first policy idea that Obama pointed to when he promised "to spell out exactly what change would mean if I am president"? Reforming the tax code -- and a drum roll, if you will, maestro. Within seconds, Obama was pledging to "eliminate capital gains taxes for the small businesses and start-ups that will create the high-wage, high-tech jobs of tomorrow."

Along with middle-class tax cuts (that siren song of Bill Clinton's presidency), Obama did unequivocally set a 10-year goal to "finally end our dependence on oil from the Middle East." But compared to Al Gore's chilling warning about global warming in his Thursday night speech before network coverage began, Obama's proposals seem pallid in comparison. Even healthcare reform -- the signature domestic issue of the Democratic primaries -- merited just 100 words. The holy Democratic grail of universal coverage was boiled down to: "If you have healthcare, my plan will lower your premiums. If you don't, you'll be able to get the same kind of coverage that members of Congress give themselves."

The Supreme Court was never mentioned by Obama, a former professor of constitutional law. Nor was Guantánamo, torture or civil liberties. These issues clearly do not poll well among swing voters in Michigan, Ohio and Indiana, industrial states that Obama highlighted with anecdotes in his speech. What all this suggests is not some ideological mushiness or inherent character flaw in Obama, but rather the reality that he finds himself in a tight campaign in which he must constantly acknowledge the conservative impulses of persuadable voters. It was no surprise that Obama, sounding a bit like Bill Clinton in 1996 praising school uniforms, said "fathers must take more responsibility to provide love and guidance for their children."

Americans never elect policy proposals; they choose the men behind them. What Barack Obama achieved Thursday night was something unimaginable in Martin Luther King's day or even in the 1990s. In a football stadium at the foot of the Rockies, this product of a marriage between Kenya and Kansas rewrote the history of a nation that has been struggling for three centuries with the legacy of slavery and segregation. Obama's gift is that he makes it all seem natural -- that his rise to the heights of a presidential nomination was an inevitable consequence of 21st century America. The fireworks that were going off over Mile High Stadium were, in truth, more than equaled by the glow in the hearts of Democrats who leave Denver alight with hope.