Palin: A "maverick" move or a nod to the GOP base?

She adds youth -- and inexperience -- to the 72-year-old McCain's ticket, but she is a by-the-book social conservative. 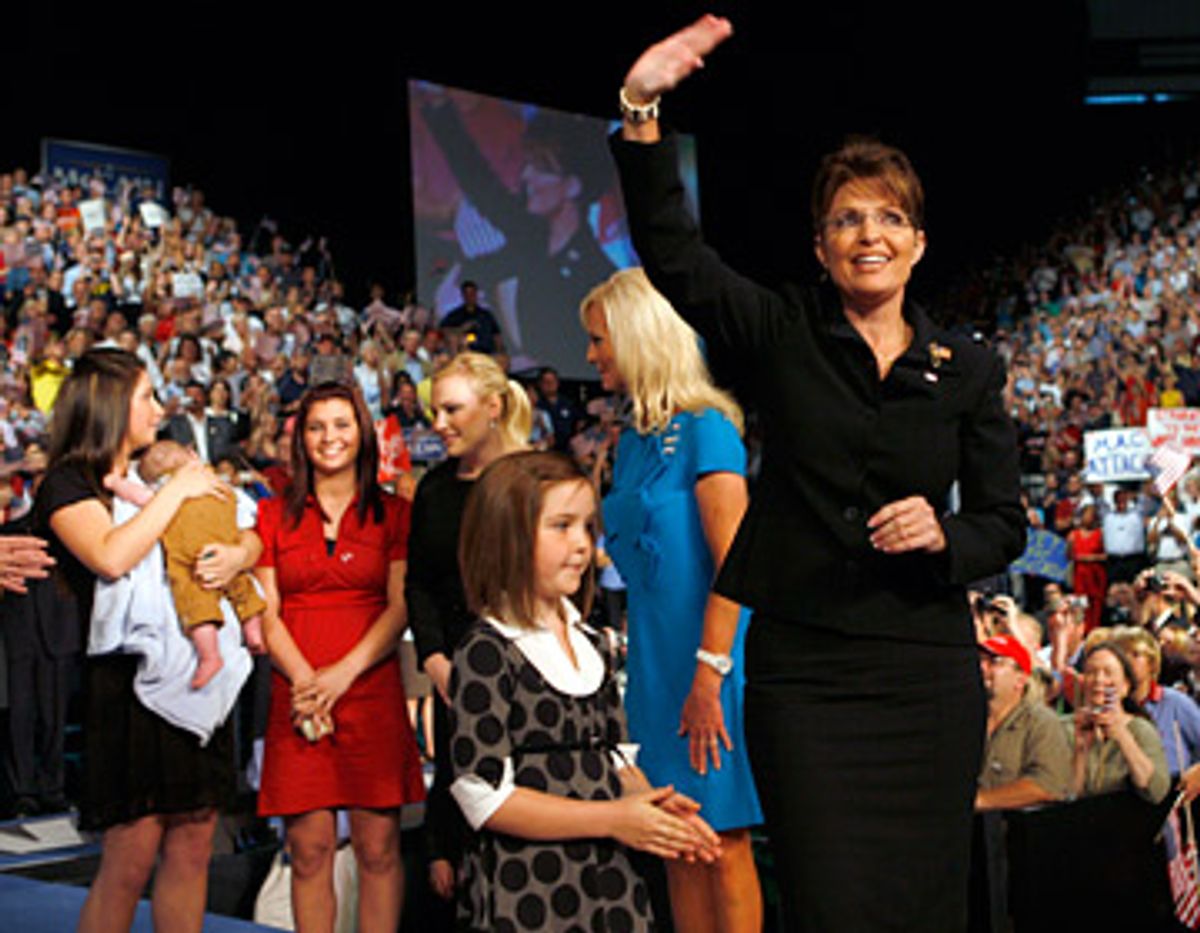 All of the speculation and hype may have focused on Mitt Romney, Tim Pawlenty and, of course, the apostate Democrat Joe Lieberman. But midway through Sarah Palin's debut on the world stage Friday morning, from a high school gym in Dayton, Ohio, it was suddenly clear that fate itself had ordained that John McCain would make her his running mate. Not only was the day McCain's birthday, it was also Palin's wedding anniversary. With biographies lined up so perfectly, did poor Mitt ever stand a chance?

Of course, it happened to be McCain's 72nd birthday, while Palin, at 44, was only celebrating 20 years of marriage to her husband, Todd. McCain clearly hopes Palin is seen as a bold, daring choice, but a casual viewer catching their rally on TV could be forgiven for wondering if she was his granddaughter; at 28 years, the age gap between them is the largest on any presidential ticket in at least eight decades. Just as Barack Obama sought to add some gravitas to his ticket in Joe Biden, McCain looked like he was aiming for some youth and excitement with Palin.

The first 10 minutes of Palin's speech were little more than a guide to her family (which may be even larger than Joe Biden's, an unlikely accomplishment for anyone) and a tour through her résumé. Yes, her family is one of the reasons some conservatives have been pushing her for months, but it did seem a bit like the introduction of a game show contestant, complete with silly names. "Some of life's greatest opportunities come unexpectedly, and this is certainly the case today," Palin said. Indeed, no one seemed to be expecting it until a few hours before the announcement, which beat Obama's for secrecy, if not for anticipation. Until she got into politics in 1992, she was -- as she said Friday -- "just your average hockey mom in Alaska," and a TV sportscaster.

But if Palin wasn't expecting the pick, imagine what Mr. and Mrs. Swing Voter out in the battleground states probably said when they heard the news. Actually, you don't have to imagine; it was "Who?" Palin has only been in office since 2007, and five years before that, she was the mayor of Wasilla, Alaska, population 9,780. One Democratic pollster joked that her name ID -- the percentage of voters who said they'd heard of her -- was probably lower than a Salon reporter's until she started showing up in stories speculating about McCain's choice this week.

Given that McCain's opponent was in the Illinois Legislature four years ago, of course, Palin's sojourn in Wasilla (where she also played point guard for Wasilla High's basketball team and competed in the Miss Alaska pageant, as Miss Wasilla 1984) isn't exactly a disqualifier. But it could make McCain's argument that Obama isn't ready for the presidency a little more complicated.

"It's apparent to me that McCain and his core supporters wanted either Lieberman or their favorite Republican governor," said one veteran Republican who worked for one of McCain's rivals in the primary campaign. "And they didn't pick either of them, which tells you something. It says that McCain needs help with the base. And the price of pleasing the base is a huge gap in the 'Obama's not ready' argument." Democrats were already picking up that theme Friday. "Where's the beef? Where's the experience?" said Sen. Frank Lautenberg, a New Jersey Democrat, as he left Denver. (That line was borrowed, though perhaps not intentionally, from the first major party presidential nominee to put a woman on the ticket.)

Palin should, however, please the base. A lifetime member of the National Rifle Association and a frequent hunter and fisher, she nonetheless favors drilling for oil in Alaska's pristine Arctic National Wildlife Refuge (which McCain -- for now -- does not). Tax activist Grover Norquist gave her a thumbs up, telling Salon he was "pleasantly surprised." She's beloved by the Christian right for her vocal antiabortion stand; her infant son, Trig, has Down syndrome, and the right sees her choice to carry the pregnancy to term as a heroic stand against what they call "eugenic abortion."

At home, she's by far the most popular politician in the state, although considering how much of the state's political establishment is under criminal investigation for corruption, that might not be as impressive a credential as it seems. (Palin herself is also under investigation for allegedly pushing to fire a state trooper who happened to be her sister's ex-husband.) McCain clearly sees her as a fellow maverick reformer. Palin broke -- aggressively -- from the state's Republican establishment in seeking, and winning, the governorship, defeating incumbent Frank Murkowski (one of Alaska's elder statesmen of politics) in 2006. This year, she encouraged her lieutenant governor, Sean Parnell, to challenge incumbent Rep. Don Young (another charter member of the state GOP's old boys club) in a primary that's probably heading for a recount. She also ordered construction halted on the infamous "bridge to nowhere" that Sen. Ted Stevens forced through Congress. The idea, obviously, is to shore up McCain's brand as the maverick who won't back down from a fight for justice against either party, by adding another one to the ticket.

"When you look at Sarah Palin, you think family," said one Republican strategist who's familiar with Alaska politics. "You think somebody who challenged the status quo -- she attacked it."

But McCain is also clearly charging ahead on two other strategies that could prove successful for him -- and which the Obama campaign should be able to undermine. "She was a union member, and is married to a union member," McCain said in Dayton. "She knows what it's like to worry about mortgage payments and healthcare and the cost of gasoline and groceries." America, meet John McCain, economic populist. Palin's husband, a member of the United Steelworkers, works on a North Slope oil field for BP Amoco, and you can bet you haven't seen the last McCain ad blaming Obama for high gas prices. Still, selling the GOP as the party of the little guy would be an impressive triumph for McCain's campaign against the reality-based community. Palin may come from the middle class, but she'll be pushing economic policies that would continue to give big tax breaks to people whose net worth hovers somewhere around her running mate's.

His other obvious play Friday was to set out some PUMA bait. Palin effusively praised Hillary Clinton in her speech in Dayton. "It's fitting that this trust was first given to me 88 years -- almost to the day -- after the women of America first gained the right to vote," she said. "It was rightly noted in Denver this week that Hillary left 18 million cracks in the hardest glass ceiling in America. But it turns out the women of America aren't finished yet, and we can shatter that glass ceiling once and for all." Palin's nomination could provide an intriguing test of identity politics versus issues -- McCain seems to be hoping that women who aren't sold on Obama will flock to his ticket now, but Palin is, if anything, even more rabidly anti-choice than McCain is. As with the economy, Palin will only win over the voters McCain hopes she will if they're so overwhelmed by her gender that they utterly overlook what she stands for.

With only a weekend in between Obama's historic convention and McCain's own in St. Paul, Palin's announcement is plainly aimed at changing the entire game. "The Republican establishment was pushing hard for Romney -- and they were thinking as much about 2012 or 2016 as they were about this year," said John McLaughlin, a GOP pollster. "Picking Palin is a gamble. But it's a big sign that this guy [McCain] is willing to do anything to win." What remains to be seen is if the pick comes off as bold -- or desperate. If voters are wowed by Sarah Palin, McCain will seem like a visionary. But if Democrats can turn her into the second coming of Dan Quayle, he may wind up seeming like just another Bush Republican.

-- With additional reporting by Walter Shapiro